All the festivities and over-indulgences of the Christmas and New Year period had left us with the feeling that we were overdue a good long walk.  Prior to Christmas I had continued to lose weight, totalling over a stone and a half since August.  Inevitably though a few of those lost pounds had crept (or perhaps I should say leapt) back on, leaving me with a somewhat sluggish, torpid feeling which I didn't like at all.  It was high time we got back to sensible eating and long walks!

We decided to start the year with a level walk and, after scouring my map collection I came up with what looked like the perfect route - a nice steady circuit of ten miles at the foot of the Yorkshire Wolds, alongside the Pocklington Canal.

It was an overcast day with an icy cold wind gusting straight out of the north as we drove out to the little market town of Pocklington in East Yorkshire.  Our walk began from a small car park at Canal Head, by the side of the A1079 York to Hull road.  I wasn't at all surprised to find that there was just one other car in the car park, although I'm sure this spot must be very popular in the warmer months with its picnic tables, information boards and easy pathways.  On this particular day, however, it was rather bleak and deserted.  The wind was bitingly cold and I was dismayed to discover that I'd left my woolly beanie hat at home.  A quick improvisation job with a Buff kept most of the wind out of my ears before we left the car park to march briskly along the side of the canal. 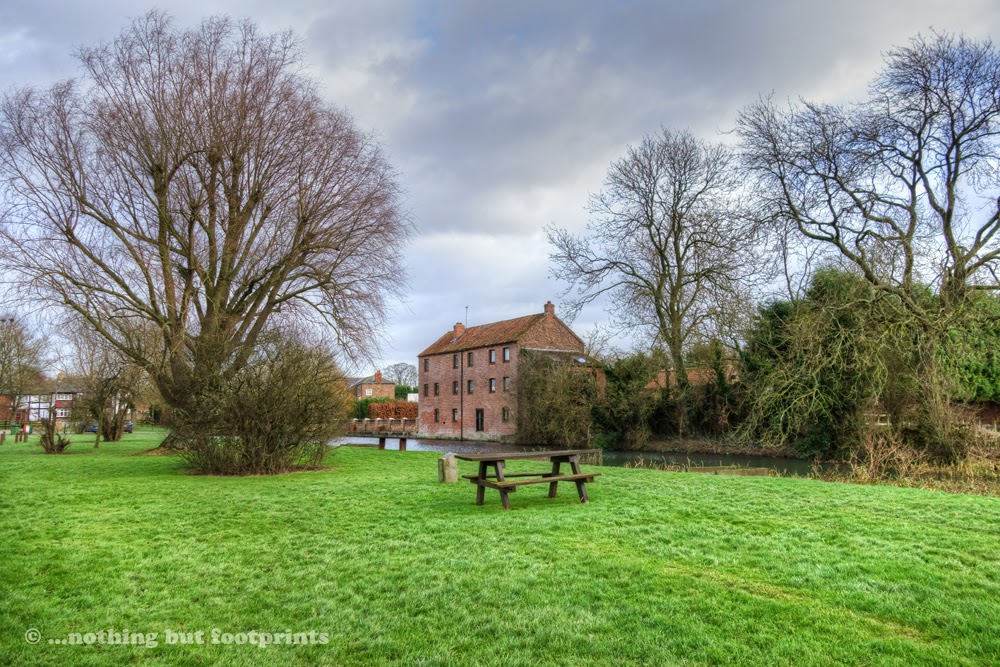 Pocklington Canal was constructed between 1815 and 1818 and was used to transport lime, coal, fertiliser and stone to the town of Pocklington and agricultural produce from East Yorkshire to the industrial West Riding.  The canal is just over nine miles in length from Canal Head to where it joins the River Derwent by the village of East Cottingwith.  From the mid nineteenth century the railway started to take most of the trade away from the canal and a gradual decline began, until eventually the last cargo was transported in 1932.  Thereafter the canal fell into decline until 1969 when the Pocklington Canal Amenity Society was formed and a period of restoration began, which is still ongoing today.

Shortly after leaving the car park we passed the first of several restored locks which we were to see along our route, this one being named Top Lock.  There are nine locks in total along the length of the canal, eight of which have been afforded Grade II Listed status. 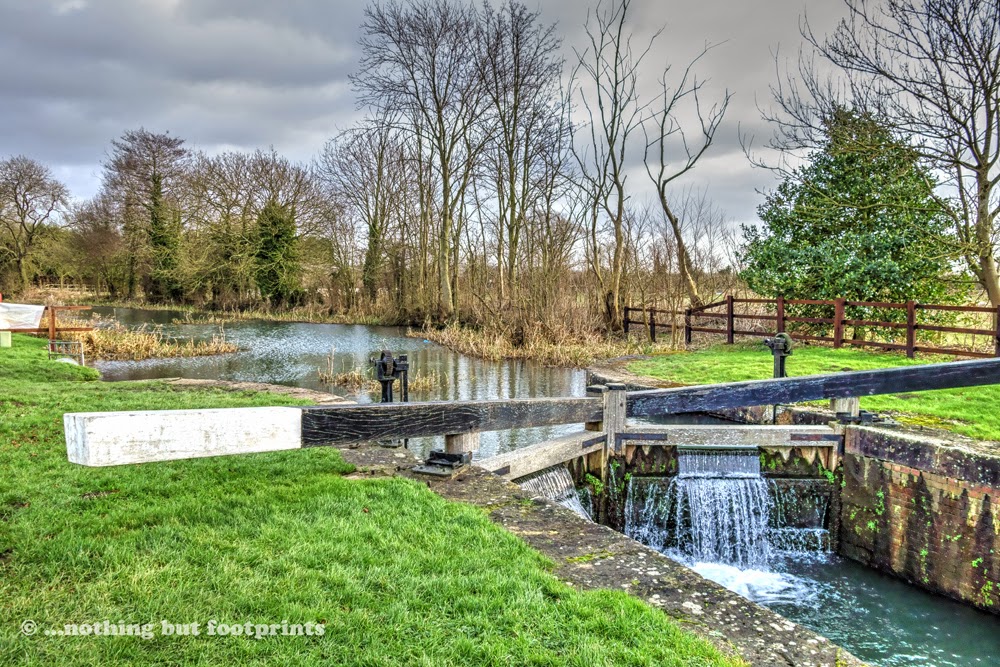 For the first, short section of our walk along the towpath the canal looked reasonably navigable, but this soon changed once we had progressed a little further to a metal barrier, beyond which the water was thick with vegetation. 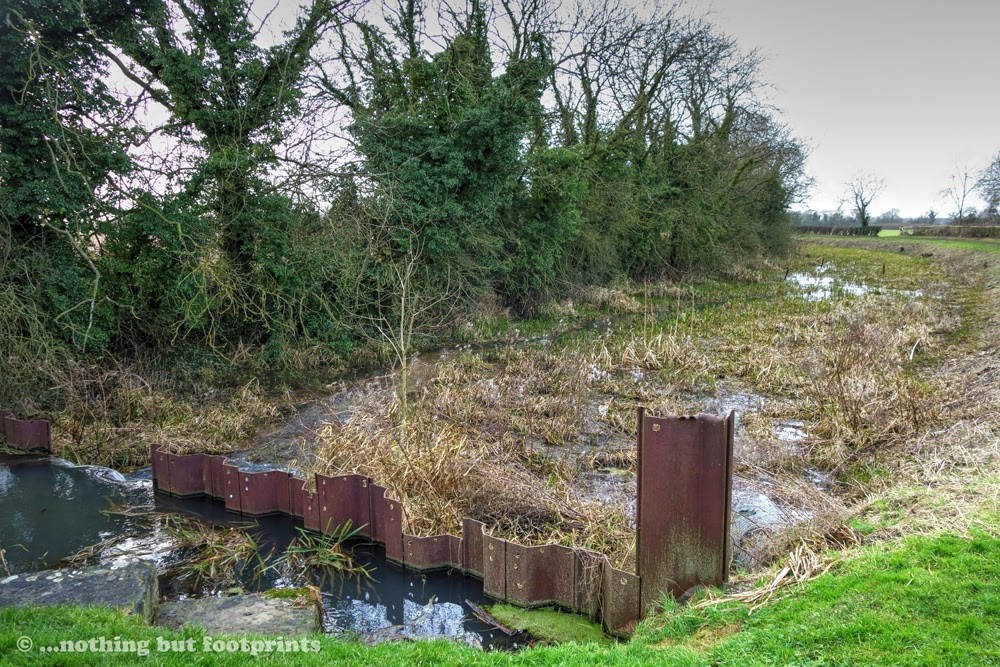 A little further still along the towpath and the canal was so overgrown with reeds that we could hardly see any water at all. 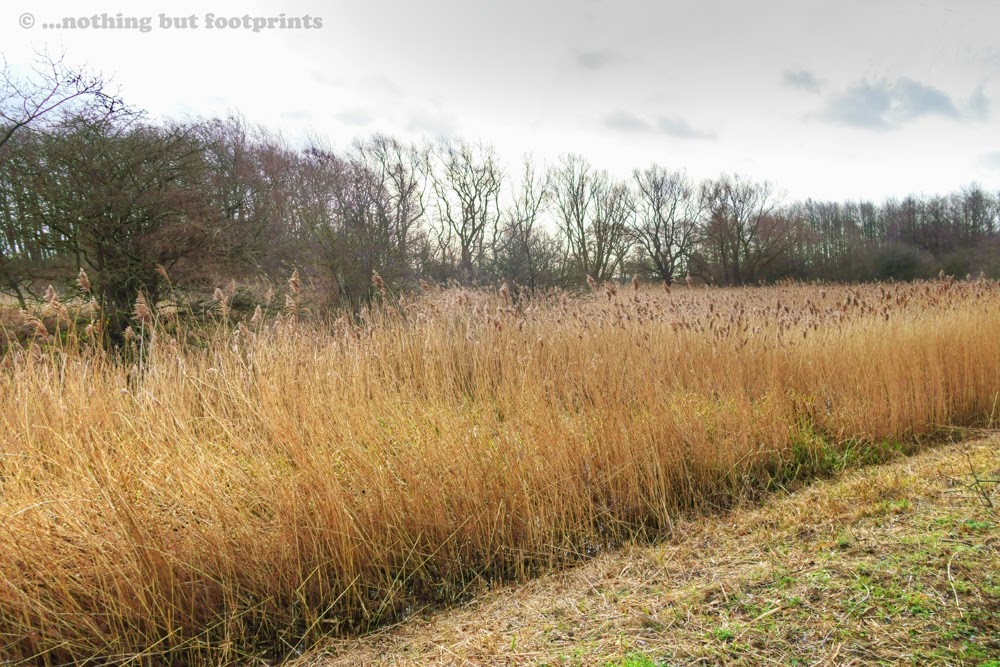 Where did the water go?

The walking was very easy along the level towpath, and although the icy cold wind periodically buffeted us with strong gusts it still felt good to be striding out in the fresh air.  And at least the wind was keeping the rain away - for the time being.

Suddenly the canal was clear of weeds again as we reached the beautifully restored Coates Lock. 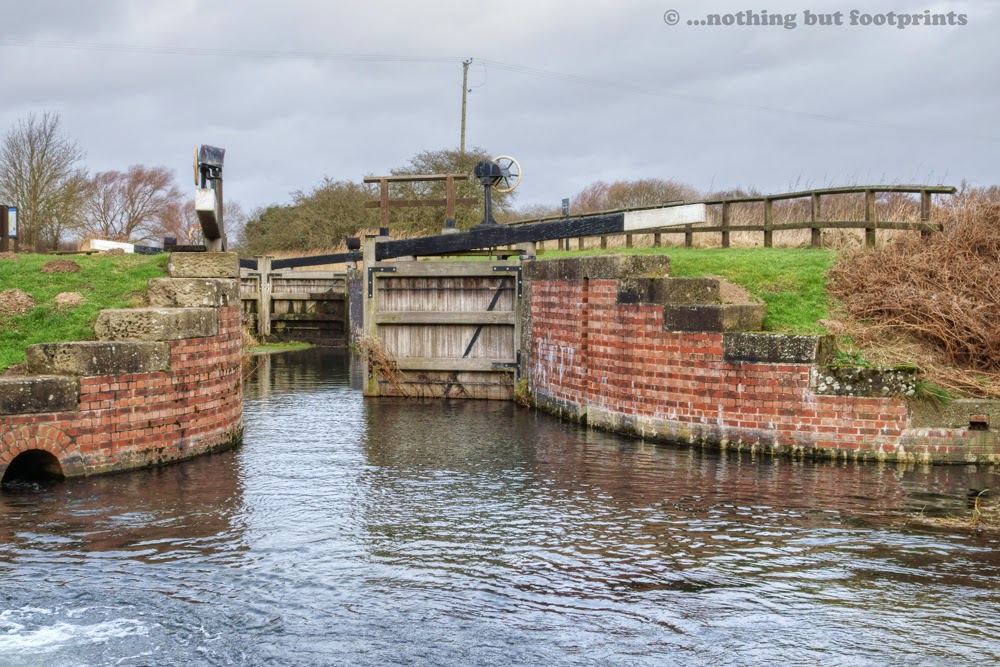 Here the path dipped down to pass under Coates Bridge, one of three restored road bridges which pass over the canal, each having been designated as a Scheduled Ancient Monument.   Beyond Coates Bridge the canal was again heavily overgrown with reeds. 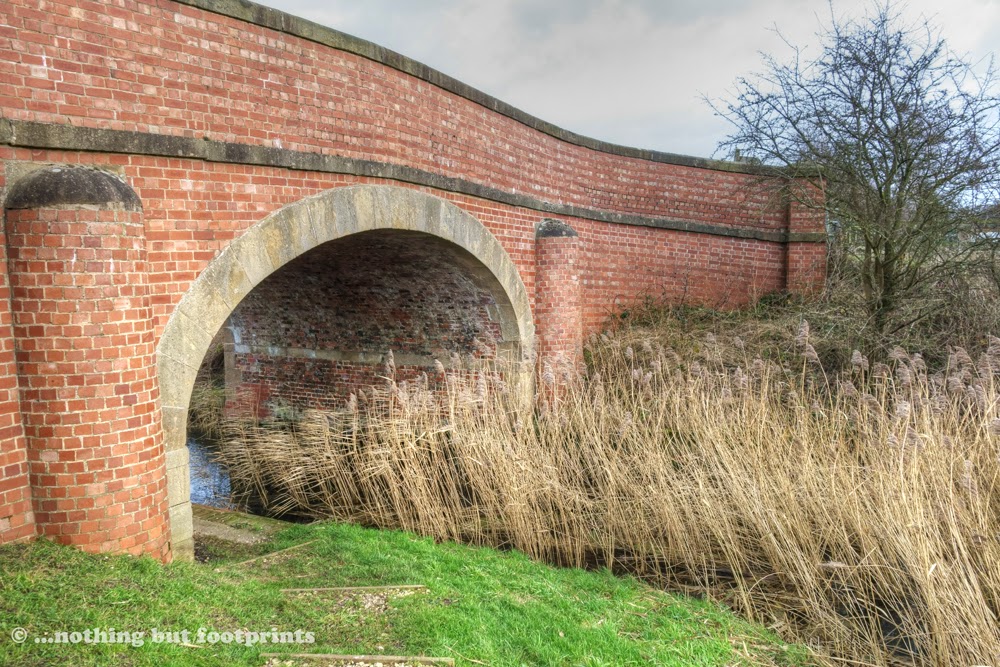 After Coates Bridge the canal bent sharply westwards, passing the village of Bielby on the opposite bank and eventually bringing us to another bridge and lock combination at Walbut Lock, where once again the towpath took us beneath the bridge. 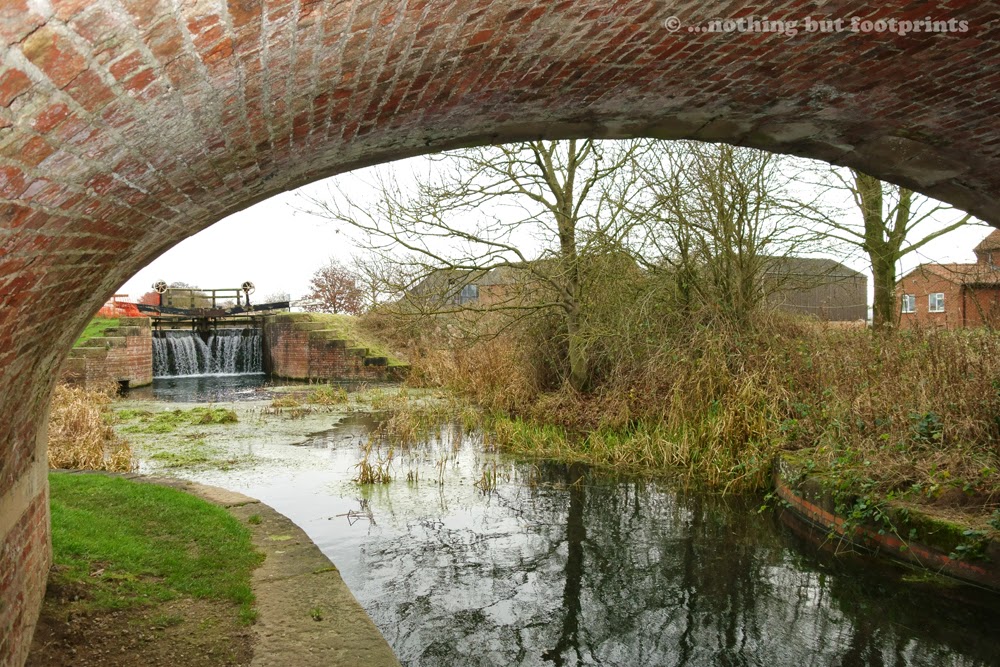 The wind began to ease a little as we walked along the towpath in the direction of the village of Melbourne and consequently the temperature seemed to rise a degree or so.  Along this section of our walk we spotted what appeared to be a small group of deer in the field to our right.  To our surprise a glance through the binoculars revealed three very large hares, playing and frolicking in the middle of the field in a decidedly spring-like manner.  As I followed their antics through the binoculars I had to remind myself that it was still January.  I was sure this kind of behaviour in hares provided the origin to the term "mad March hare".  Weren't they a little early?  Even so, it was a lovely thing to witness and I was just sorry that they were out of range for my camera.

With the abating of the wind came the first few spots of rain.  A quick glance at my map showed the very welcome symbol for a pub in the nearby village of Melbourne along with a conveniently situated bridge which would take us to the lane leading directly to the pub.  As we walked along the bank in the direction of the bridge I deliberated over whether to stick to the original plan of lunching on a banana or to risk the likely interruption to my newly re-established eating plan.  As the spots of rain became heavier and more frequent my mind was made up.  After all, pubs usually serve coffee these days. 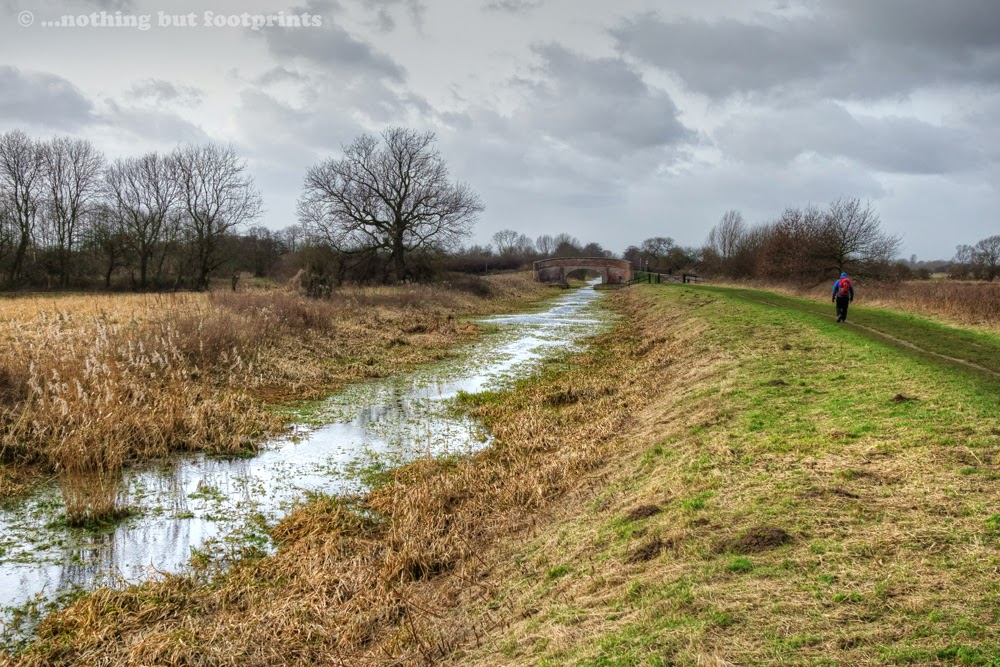 Once over the bridge it was just a short distance down into the village of Melbourne, passing by a small marina with a colourful arrangement of canal barges sheltering beneath the trees.  A little smoke drifted from the chimney of one of the barges, leaving me to wonder if these were used to navigate the remaining stretches of the canal or whether they were simply used as houseboats. A little further along the lane took us directly to the Melbourne Arms, a very warm and welcoming pub.  All thoughts of sticking to just a coffee left my mind as I saw the range of guest ales on offer, including one of my all time favourites, Hobgoblin.  The pub's menu was also too good to resist and I succumbed to the most delicious, warming bowl of homemade beef stew served with warm crusty bread, reasoning that a banana just simply wasn't good enough to fuel a ten mile walk on a cold January day.  It was glorious!

It had stopped raining by the time we left the comfort of the Melbourne Arms and continued our walk, back past the canal barges, over the bridge and on to the towpath once more.   After just a hundred yards or so we left the towpath and turned northwards, heading across a series of fields in the direction of our return route to Canal Head.   Unlike the towpath, this part of our route was very muddy in places and our pace slowed as we negotiated our way through boggy ground and around large puddles.

Suddenly we stopped in our tracks, amazed to find we were passing a field of sheep with newborn lambs and once again I questioned whether I had leapt forwards in time to March.  Lambs?  In January?  It was a lovely sight and a reminder on a bitterly cold day that Spring was not so very far away after all. 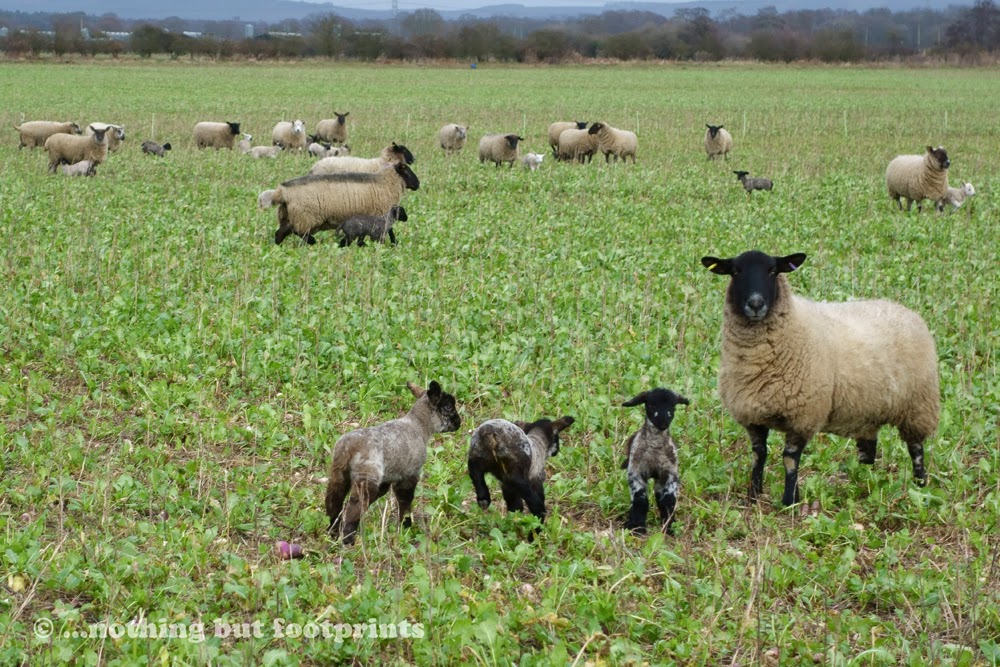 The final stage of our walk took us through Allerthorpe Wood, a nature reserve maintained by the Yorkshire Wildlife Trust which is particularly known for insect life and a resident population of adders.  Our route followed a path through the Forestry Commission's pinewood plantation which was very pleasant and sheltered us from the wind, which had begun to strengthen again. 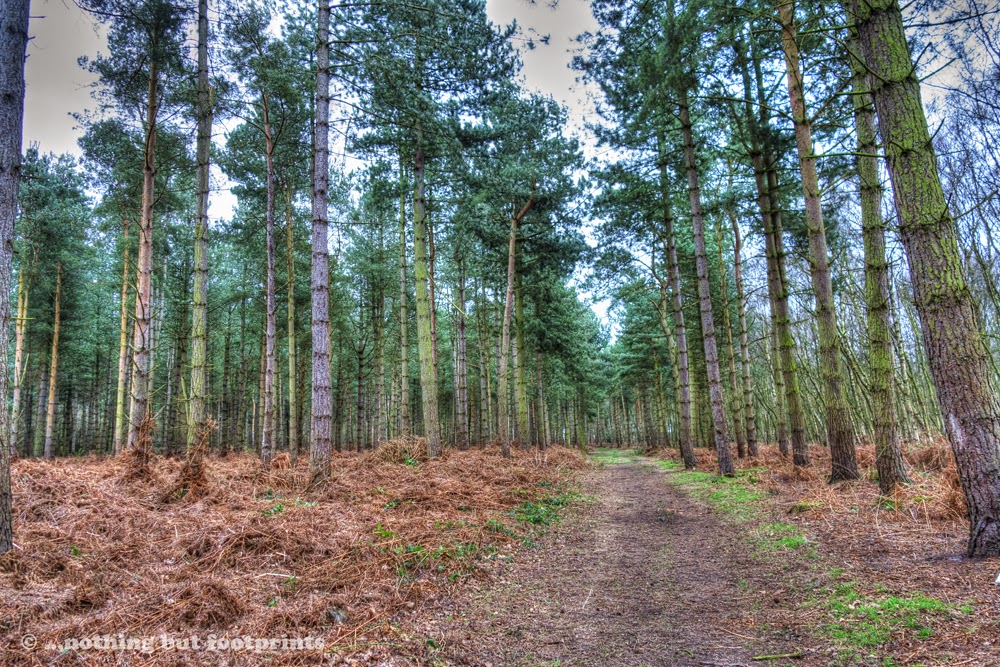 After a while the conifers gave way to a woodland with a less managed appearance, more like an area of wildwood.  Adders apparently hibernate until February, a fact I found reassuring, although I would also like to see one from a safe distance. 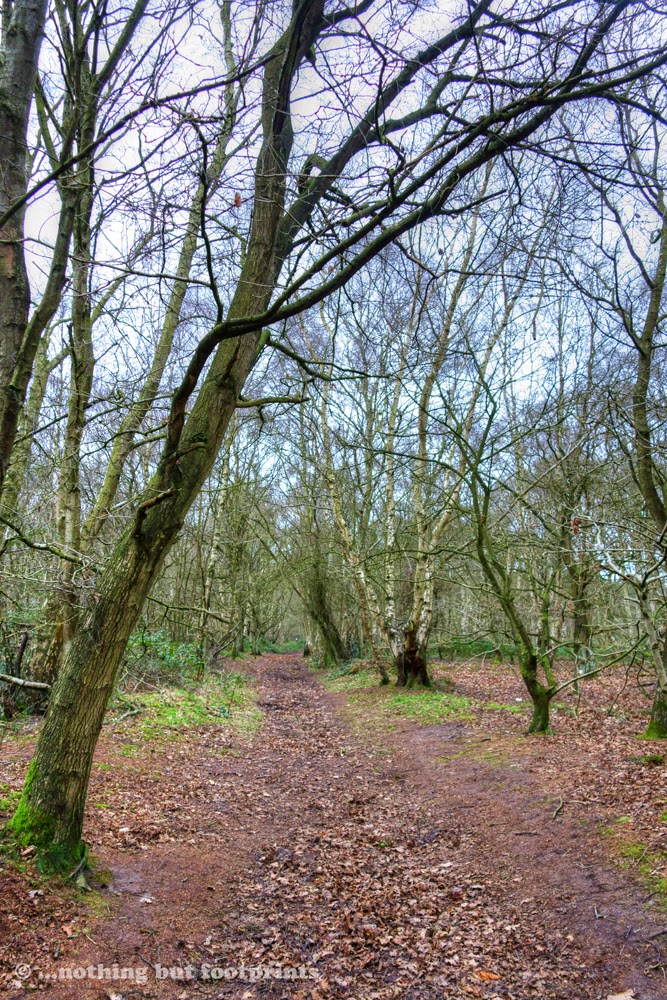 The path from the woodland emerged into the village of Allerthorpe from where we headed back towards the A1079, passing by St Botolph's Church along the way.  Here a slate plaque commemorates the fact that Allerthorpe was the birthplace in 1807 of Thomas Cooke, a renowned maker of scientific instruments, best known for his astronomical telescopes which were some of the biggest made in Britain in the 19th century. 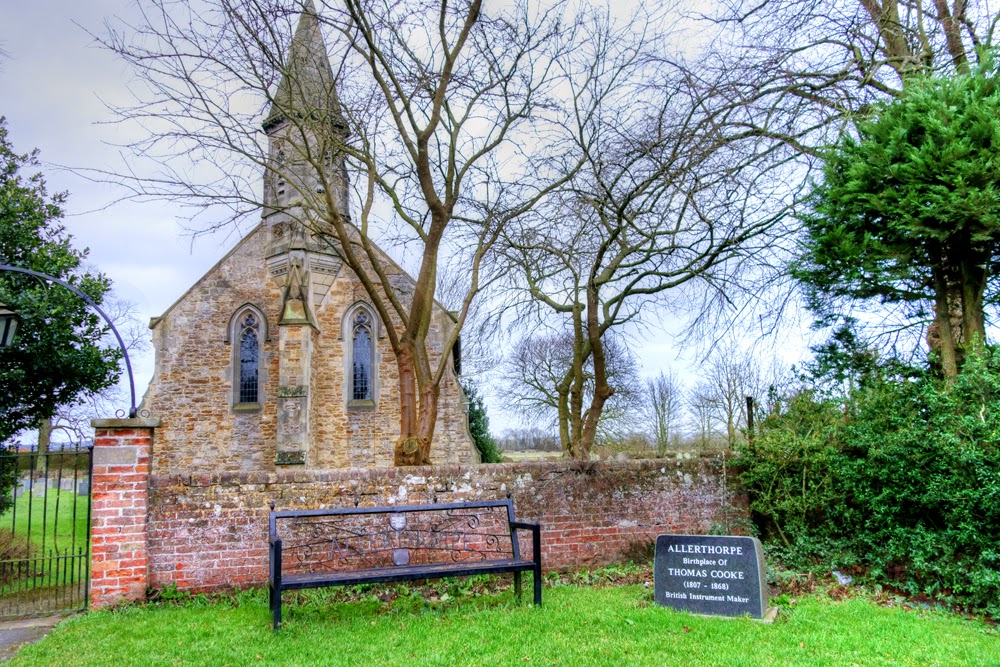 The final section of our walk entailed a rather unpleasant but necessary quick march along the side of the busy A1079, returning us to the car park at Canal Head.  Here I spotted a stone monument which I hadn't noticed on our departure due to my being preoccupied with sorting out my headgear.  In 1943 a returning Lancaster bomber had crashed into a nearby farm, killing all seven crew members along with two occupants of the farmhouse.  I've seen a few little plaques like this on my travels and they always provide a poignant reminder of how fortunate we are to live in such relatively peaceful times. 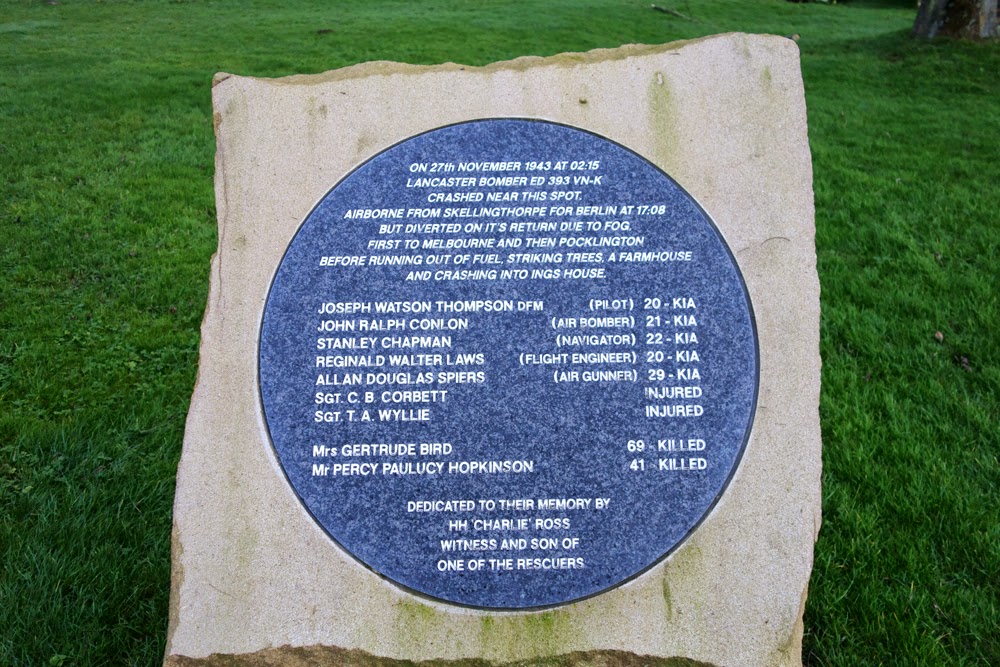 Memorial to a plane crash


The light was fading fast as we set off on our journey home.  With the possible exception of the final, roadside section of the route, it had been a very pleasant walk and a most welcome start to what I hope will prove to be another year of enjoyable walking. 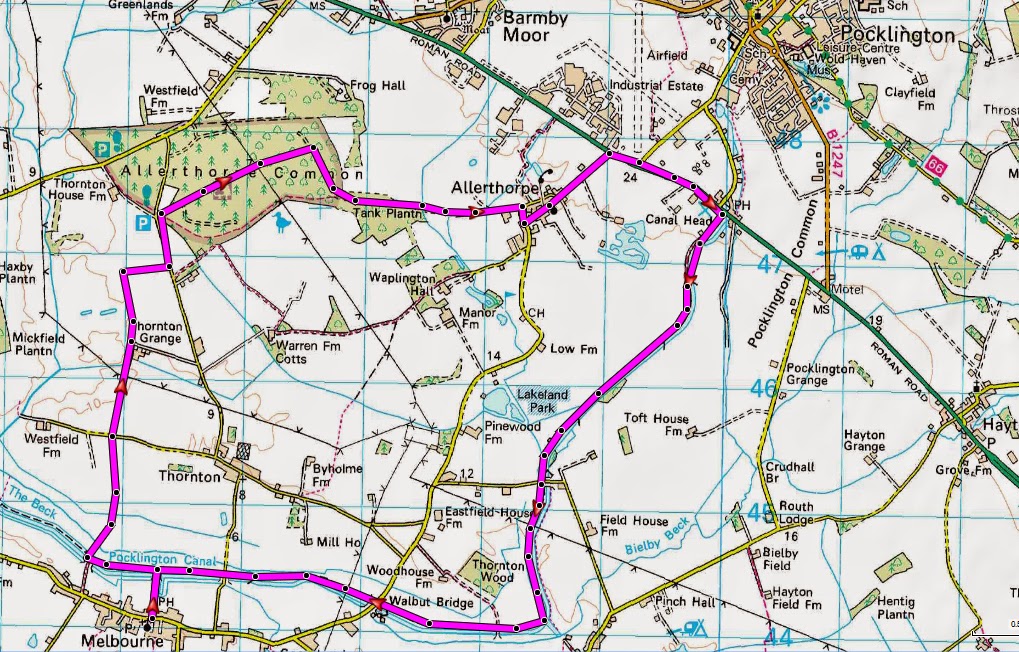 Coming soon...We visit the Yorkshire Wolds for a long, snowy walk starting out from the village of Thixendale.
at 13:57 No comments: