- October 30, 2013
As well as a truly spectacular coastline, Pembrokeshire also boasts an abundance of prehistoric sites including the hillside from which the bluestones of Stonehenge were hewn - the Preselis.


Quite how the inner ring of Stonehenge's bluestones were transported the 180 miles from the summit of the Preseli Hills to Salisbury Plain in Wiltshire remains a mystery.  There are 80 stones in total, each weighing approximately five tons, giving rise to debate as to whether people or glacial action moved them.   I tend to favour the theory that their movement was the deliberate work of a group of people in view of the significant number of early prehistoric sites that have been discovered in the area surrounding Carn Menyn, the main source of bluestones.
Our holiday cottage had an uninterrupted view across to the distant Preseli Hills and a walk among the bluestones was at the top of my holiday itinerary.  Normally I would look at the weather forecast for the week and pick the best possible conditions for such a walk, but in this case every day was the same - hot!

Our walk began from just outside the village of Mynachlog-Ddu and the curious Waldo Stone, a bluestone memorial to Waldo Williams (1904-1971), who has been called 'The most original Welsh language romantic poet of the 20th century'. 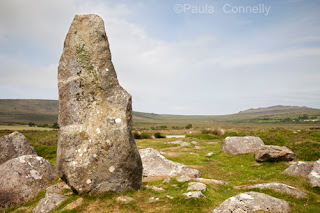 From this point it was a fairly easy climb to the first summit - Carn Bica.  There was a little hazy cloud cover towards the higher ground which provided a welcome relief from the blistering heat at lower levels.  Standing on the summit of Carn Bica we could hear the shouts and laughter of a school party on a distant peak and looking down from this vantage point we could also make out a group of rocks which our map identified as Beddarthur.  According to local mythology, this was one of the many supposed last resting places of the legendary King Arthur.  There are actually many places throughout the UK which lay claim to the sleeping king and, as it turns out, another lay just a couple of hundred yards away at Carn Arthur! 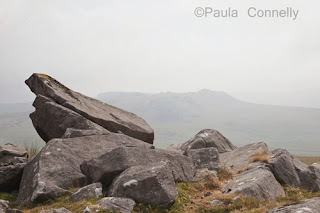 From Carn Bica our route was to take us to the summit of Carn Menyn.  I had always thought that my sense of direction and navigational skills were very good indeed, but as it turns out this was the day when I discovered that this wasn't the case at all.  I had both a map and a guidebook and I knew that the path wasn't particularly distinct.  Setting off towards what I believed was Carn Menyn we quickly found ourselves in a reed-filled marsh.  A lengthy struggle ensued to a rocky peak which, it transpired, was in the complete opposite direction to our destination of Carn Menyn, necessitating a second climb to the summit of Carn Bica.  In temperatures exceeding 80 degrees, this was very hot work indeed and when we eventually reached the summit of Carn Menyn we had added an extra two miles to our walk. 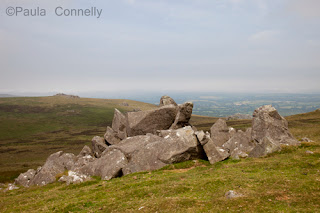 The top of Carn Menyn was a fascinating place, littered with bluestones.  It was in 1922 that these stones were identified by a geologist called Dr H H Thomas who noticed that the pink and white crystals of fieldspar in Carn Menyn's dolorite were identical to those seen in the slabs of Stonehenge. 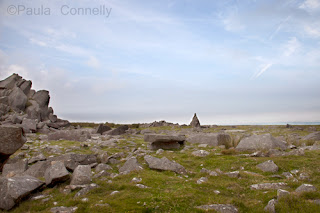 We lingered a while among the bluestones before making our way back to Mynachlog-Ddu and the Waldo Stone.


Over the course of our week in Pembrokeshire we visited two further prehistoric sites of interest.  The little Neolithic chambered tomb of Carreg Coetan Arthur (yes, King Arthur again!) and the larger, slightly  more impressive Pentre Ifan.  Dating from circa 3700-3000 BC these tombs would once have been covered by rocks and earth. 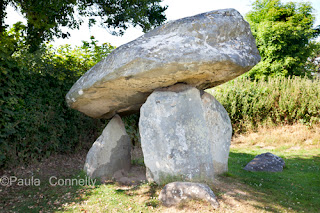 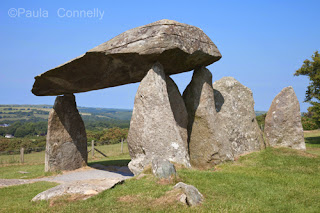 A week is never long enough to thoroughly explore an area as beautiful and diverse as Pembrokeshire.  Our week really only just gave us a taste of what was on offer, leaving us keen to return to this lovely corner of Wales.