When choosing a route for a walk I usually take into account potential photographic opportunities and, more often than not, likely looking places for refreshment breaks.  My "refreshment break" of choice would usually  be a local ale and a tasty pub meal, but on this occasion I wanted to sample the treats on offer in the garden of a moorland farmhouse in the picturesque valley of Rosedale.  The route I planned was a nine mile circuit, starting and ending at the village of Rosedale Abbey and following the line of the old Rosedale Railway before dropping down to the farmhouse tea garden and then continuing back along the valley bottom.
The Rosedale valley is green and fertile, nestling between the higher moorland of Blakey Ridge and Spaunton Moor.  Today it is home to a few quiet farms and many of the houses along the valley are now second homes and holiday cottages.  It's a tranquil place, but a century ago things were very different indeed. 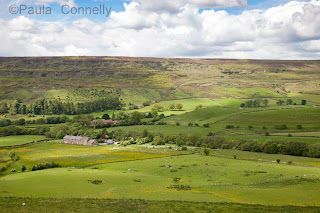 In 1853 magnetic ironstone was discovered in Rosedale and in 1856 open cast mining in the area was producing ironstone of a very high quality, leading to the commencement of drift mining and eventually full production at the Rosedale West Mine in 1861.  Thereafter a further mine was opened at Rosedale East in 1864.  This subsequently led to the construction of the Rosedale Railway, a remarkable feat of Victorian engineering which transported ironstone across the moorland to the main line at Battersby Junction from where it could be carried onwards.  Today there are various ruins of the old mine workings dotted around the edges of the valley (I've already included images of the Rosedale East Mine calcining kiln and a ruined railway workers cottages in an earlier entry).    The abandoned railway track today provides an excellent level route for walkers and cyclists as it winds its way around the top of the valley for over ten miles in total.  On the day we walked round the valley edge a marathon was taking place in the opposite direction to our route and we called out encouragement as the runners sped by in various degrees of exhaustion (I think they were nearing the finishing post).  Photoshop has a clever little tool which allows me to make them disappear, as if by magic! 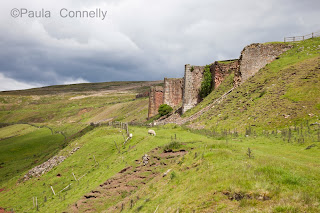 At the head of the valley we dropped down to the lovely Dale Head Farm where the farmer's wife has opened a small tea garden.  I'd read about this on the internet and was very keen to try the Wensleydale cheese and banana chutney sandwiches, followed by Yorkshire teabread and a lovely cup of tea.  The menu also included intriguing delights such as "Moggy" and "funeral biscuits", leaving plenty of enticement for me to go back again one day.
﻿ 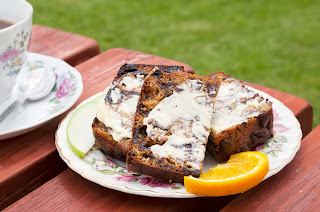 Dale Head marked the exact half way point of our walk and our route back took us along the valley bottom from where we could look across to the mining ruins we'd walked past earlier. 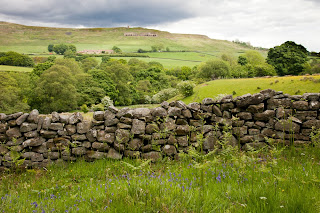 Eventually the path led us back into the village of Rosedale Abbey and past the little church of St Mary and St Laurence.  The church was built in 1839 from stones remaining from the Cistercian nunnery which gave the village its name.  The ruins of a small turret staircase next to the church is all that remains today of the former abbey. 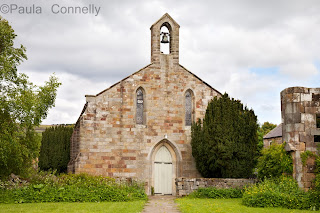 This won't be the last time I explore Rosedale.  There are plenty of routes around the area....and I just have to try those funeral biscuits!﻿
﻿
﻿
North York Moors