- October 21, 2013
I really love the North York Moors.  And I love steam trains too.  So it's no surprise that my favourite walks often combine the two with a route planned to take in a section of the NorthYork Moors Railway.
From the pretty town of Pickering the North York Moors Railway winds its way through some of the loveliest scenery in Yorkshire, visiting the popular villages of Goathland and Grosmont before joining the Esk Valley Railway which continues to the seaside town of Whitby. 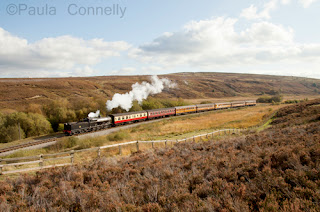 Until the early 19th century the port of Whitby was only really accessible by sea.  In fact, there had been no proper road links to the town until the opening of the turnpike in 1759 and even after this date journeys across the high moorland were perilous.  In 1832, after consultation with the "Father of Railways", George Stephenson,  it was decided to build a railway to Whitby from Pickering.  In 1833 the Whitby and Pickering Railway Bill received royal assent and the first section of the line between Whitby and Grosmont was opened in 1835, with the complete line from Whitby to Pickering opening in 1836.
The railway gradually declined throughout the 20th century and, as with many similar little lines, it closed completely in 1965 following the infamous Beeching Report.  From this time onwards the line was turned over to a group of dedicated enthusiasts who subsequently  re-opened it, initially with a staff of volunteers, although today its workforce is made up of both paid and voluntary staff.


Whilst I do enjoy a ride along the North York Moors Railway from time to time, I have to confess that I find it much more enjoyable to watch the trains steam by a particularly dramatic stretch of moorland scenery, or to visit the stations at Grosmont, Goathland or Pickering to photograph the trains gathering steam. 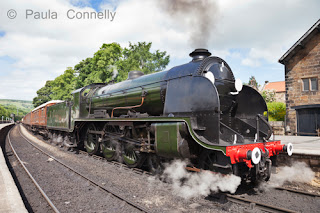 In late June I set off from Goathland to walk a ten mile circuit, taking in some woodland and high moorland before dropping down to the pretty village of Egton Bridge.  Here the village is divided by the River Esk with most of the houses on one bank and the pub on the other.  The quickest route from one side to the other is via a set of stepping stones, which led me to wonder how many people have slipped into the river on their way back from an evening at the pub.  The stones are very flat and not too slippery, but even so I crossed with extreme caution - mostly because I had my camera round my neck and I usually have more thought for its protection than my own safety. 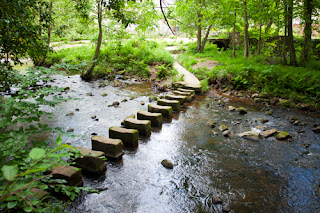 It was on this particular walk that we discovered the very finest heather honey we have yet to find.  We're very fond of honey and always on the lookout for roadside signs outside the homes of local bee-keepers.  Heather honey, in our opinion, is the very finest of all and so we were delighted to spot a sign outside a house by the River Esk in Egton Bridge proclaiming "Local heather honey for sale".  And what a find!  We knocked on the door and were let into a small utility room stacked with jars of honey, the walls of the room covered with rosettes and prize cards for local produce shows, the Great Yorkshire Show and similar.  Nearly all of these were the red rosettes given for first prize and, having been back to this house a couple of times since to stock up, I can confidently state this honey would get a first prize from me every time.   Heather honey is  dark, rich and aromatic with a thick, almost jelly-like texture, and it has a stronger taste than most other honeys.  Absolutely delicious and packed with protein, iron and anti-oxidants.  A really healthy treat!


From Egton Bridge we made our way along a stretch of disused railway line to the village of Grosmont and a quick visit to the station so I could grab a few shots of a train gathering steam.  Then it was back across the moors to Goathland, but not without a short pause by the railway line at Thomasson Foss waterfall where I sat in wait of a steam train. The light was ideal and the setting delightful and I hoped I wouldn't have to wait too long until the sound of a whistle would  prompt me to pick up my camera for the perfect steam train shot.  I had to wait half an hour, which wasn't too long really, but in that time, typically, the light began to change - and not for the better.  The train, when it eventually thundered past, was a diesel.   It was a vintage diesel, not the steam train I'd hoped for - still worth a quick shot, but highly lacking in any kind of "wow factor". 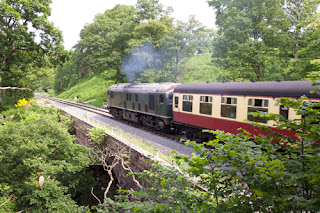 Undeterred, I decided to sit it out a while longer.  It was getting quite late in the day now and I wasn't even sure if the trains had stopped running, but after about another twenty minutes or so I was rewarded with a steam train.  Only this one was tender-first (or "arse-about" as we might say here in Yorkshire).  Not exactly what I'd hoped and waited for, so once again the perfect steam train shot eluded me.  That didn't bother me too much though because it was such a truly lovely spot and the walk had been wonderful. 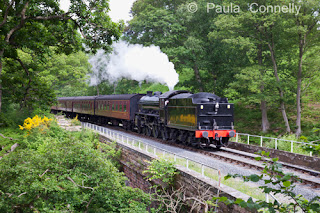 I'm determined that one day I will get that perfect moorland steam train shot, but until I do I have the perfect excuse to keep on going back to this beautiful place.  And sit and wait. And wait.  Preferably with a flask of coffee and maybe a few slices of bread and honey.