- November 12, 2013
August is a good time to visit the North York Moors.  At this time of year the heather is in full bloom; a carpet of purple in every direction, at some points extending as far as the eye can see.  It really is very beautiful.


In late August we drove to Castleton on the northern edge of the moors to walk a 12 mile circuit through Westerdale, to Rosedale Head and then back to Castleton via the village of Botton.  We drove to Castleton early in the morning, driving through thick fog for the entire 40 mile journey, all the while believing it would soon burn away with the rising sun.  However, this didn't happen until well past midday and so the first half of the walk was very damp with poor visibility.  Occasionally a light breeze would pick up and the mist would swirl, giving a brief glimpse of features in the landscape. 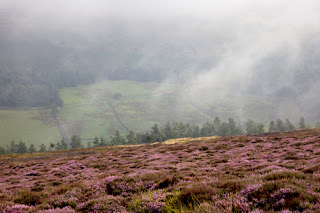 Just outside the village of Westerdale, nestling amongst trees in a valley bottom, we came across an interesting little bridge which I photographed, in spite of the light being very weak and flat.  I was curious about this little bridge which spans the River Esk, as it left the road but didn't seem to actually lead anywhere.  Subsequent research has identified this as Hunter's Sty Bridge, a medieval packhorse bridge possibly built by the Knights Templar who are thought to have had a preceptory in the Westerdale area in the 12th century.  The bridge was restored in 1874 by Colonel Octavius Duncombe, from the Duncombe Park Estate at Helmsley which owned most of the Westerdale Moor area at that time. 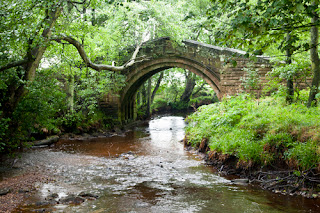 As we walked out of Westerdale and towards the head of Rosedale via Castleton Rigg, I was hoping the mist would clear in time for our midway point.  I had planned this to not only coincide with our lunch stop, but also to enable me to photograph one of the three moorland crosses along our route.  As we passed the first of the crosses the mist did indeed begin to lift, enabling me to get a reasonable photograph.


There are many crosses and standing stones all over the North York Moors.  Some mark the boundaries between parishes or areas of grazing land, some are waymarks to aid travellers across the open moors and some mark the places where monks would preach to the local communities.   I have long had a fascination with the moorland stones and crosses and so I was very keen to have the opportunity to visit and photograph three in one day's walking.  The first we encountered was Fat Betty, also known as "White Cross" due to the fact that it is periodically painted white to enable it to act as a visible waymark. 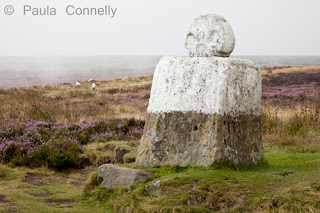 Fat Betty isn't actually a cross as such, it's more a short stump with a wheelhead cross on top.  Possibly dating from the Norman period, Fat Betty marks the boundary between the parishes of Castleton and Rosedale.  There are a couple of legends as to how the cross came by the name of Fat Betty.  One tells the tale of a nun named Sister Elizabeth who lived at nearby Rosedale Abbey  and was, to put it politely, a generously proportioned lady.  The second myth tells the tale of a farmer's wife called Betty who fell from the back of her husband's cart as they travelled home from market one foggy night.  When the farmer retraced his steps in search of his wife, he found that she had been turned to stone.
A short distance along the road from Fat Betty stands the first of the two Ralph Crosses.  The tallest and most recent of the two marks the crossroads between Castleton, Westerdale, Rosedale Abbey and Gillamor, and is known as Young Ralph.  Standing at nine feet high, Young Ralph is the most famous of all the moorland crosses as it is used by the North York Moors National Park as their emblem.  It is thought Young Ralph was erected in the eighteenth century, possibly to replace an older medieval cross on the same site or perhaps to provide a taller version of the ancient Old Ralph which is situated approximately 300 yards away from the road. 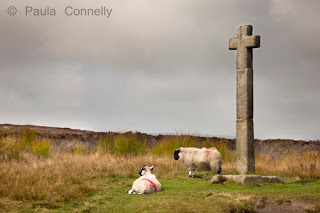 To get to Old Ralph involved a tramp through the heather as there was no clear path at this point.  However, when we eventually found him the mist finally disappeared completely, the sun came out and we enjoyed a very pleasant picnic lunch, sitting on the base of the cross.


Crucem Radulphi is listed in the Guisborough Charters  of 1200AD and therefore this cross possibly takes its name from Bishop Ralph of Guisborough Priory who in 1200 was granted grazing rights in this area.  Local legend, however, tells that the cross is named after a Danby farmer name "Aud Ralph" who erected a memorial to a traveller who died on this spot.  Local legends are fun!  There's also one that states that if Old Ralph ever gets up and joins Fat Betty then they will marry.  Now THAT I would like to see!! 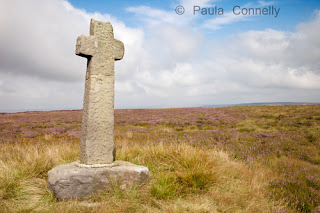 After an enjoyable lunch in the presence of Old Ralph we retraced our steps back past Fat Betty (stopping to give her Ralph's best wishes) and then made our way across the moors to above the village of Botton.  Here the sun was shining and the heather was blooming - the very best kind of day to be out on the moors. 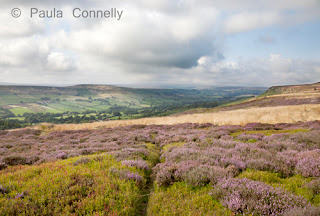 Before returning to Castleton we passed through Botton, which is a lovely secluded little moorland village I'd never heard of before this walk.  I was intrigued to see various little workshops and shops and it quickly became apparent that the village was a special kind of community.  Botton, it turns out, is a Camphill Community with a population made up of 130 "villagers" who are all adults with learning disabilities and 150 "co-workers" who assist them with work on the community's five farms and in various workshops where products are made to sell to the public.  It was very peaceful as we passed through, and being quite late on a Sunday afternoon there was no sign of activity until we walked along the lane out of the village where we had to stand aside to make way for a herd of longhorn cattle.  Apparently, Botton was the subject of a 2005 Channel 4 documentary entitled "The Strangest Village in Britain".  We didn't find it strange at all.  It was actually very peaceful and charming. 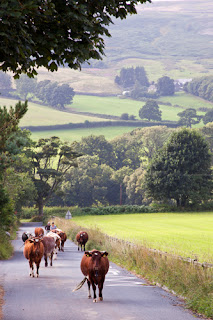 Our walk ended back in the village of Castleton  from where it was a short drive to the Lion Inn on Blakey Ridge and time for a refreshing beer before heading home from what had been a rewarding and highly fascinating moorland walk.