- December 05, 2013
Sutton Bank marks the western edge of the North York Moors.  Also known as Roulston Scar, its 1 in 4 (25%) gradient and hairpin bends make it a formidable hazard for motor vehicles.  Lorries frequently become stuck and caravans are prohibited from using this section of the A170.    However, Sutton Bank also provides what many believe to be the finest view in the whole of Yorkshire, looking over Hood Hill and Lake Gormire, across the Vale of York and the Vale of Mowbray to the distant Pennines.  It is one of our very favourite places. 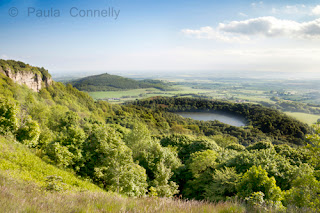 The view of Lake Gormire and Hood Hill from Sutton Bank


On the first Sunday in October we left our car at the National Park Visitor Centre at the top of Sutton Bank and headed off on a circular walk of 12 miles, beginning with a very pleasant stroll through Hambleton Plantation where I was delighted to find an abundance of Amanita Mushrooms, commonly known as Fly Agaric, the quintessential toadstool.  I had never actually seen these before except in pictures, and so I was very pleased to have an opportunity to take some photographs of my own, even though the light was far from ideal in the thickness of the plantation. 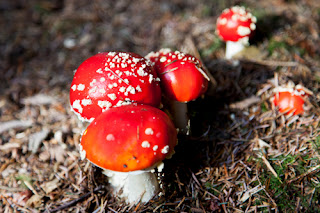 
After crossing the busy A170, our route took us down a quiet country lane to the beautiful little hidden gem of Scotch Corner.  Here, tucked away in a quiet corner, sits a little stone chapel which was constructed in 1957 by the sculptor John Bunting as a memorial to those who lost their lives in the Battle of Britain.  I had read about Scotch Corner in a book by the sculptor’s daughter, Madeleine Bunting, entitled “The Plot: A Biography of an English Acre”.   In her book Miss Bunting explains that the name Scotch Corner is derived from the bloody Battle of Byland which was fought nearby between the English and the Scots in 1322.  Her father was a very talented sculptor and the building contains many fine examples of his work, although it is usually locked and only accessible to the public on certain days. 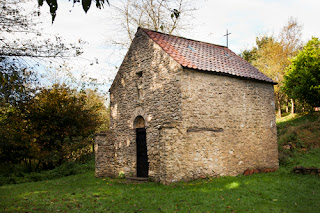 The Little Chapel at Scotch Corner
There is, however, an example of Bunting’s work to be seen on the high ground immediately behind the chapel, in the form of a carving of a Madonna and Child.  I took a few photos of this beautiful carving, but these don't show it at its best, due to sunlight dappling it with the shadows of leaves. 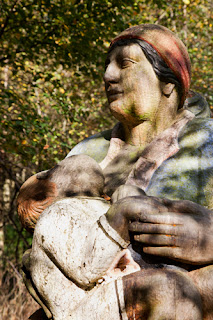 
Scotch Corner was such a peaceful and interesting place it was tempting to spend a while enjoying the solitude, but with ten miles of walking still ahead of us we pressed on, through pastures and woodland until eventually we emerged at Byland Abbey.  In the care of English Heritage, Byland Abbey was a Cistercian abbey founded circa 1147 and disestablished in 1538 during the Dissolution of the Monasteries.  The ruins are impressive, with the most notable feature being the remains of the magnificent west front with its ruined great rose window, which provided the inspiration for the great rose window of York Minster.  Byland Abbey is also home to some beautifully preserved medieval floor tiles and a cloister containing 35 niche seats.  There is also a small museum on site with an interesting display of archaeological finds.  On a previous visit we had enjoyed a tasty sandwich and glass of beer at the nearby Byland Inn, so we were somewhat disappointed to discover that this has now been changed to the Byland Tea Rooms.  Not a drop of beer in sight!  We continued thirstily on our way and stopped instead at the pub in the nearby village of Oldstead. 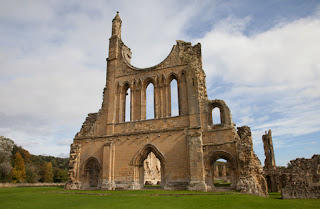 
Suitably refreshed, our route from Oldstead took us over fields and along quiet country lanes until we eventually reached the village of Kilburn, famous for two animals – a mouse and a large white horse.


Robert "Mouseman" Thompson (1876 – 1955) set up a business manufacturing oak furniture in the Arts & Crafts style in the early 20th century.  It is claimed that whilst he was in the process of making a piece of furniture for a church, a remark was made about being as “poor as a church mouse” and thereafter Mr Thompson took to carving a little mouse onto every piece of furniture he made.  Today his workshop is run by his descendants, who still manufacture high quality oak furniture, every piece bearing a small carved mouse.


The White Horse of Kilburn is a chalk figure which was carved into the side of the hill overlooking the village.  The largest and most northerly hill figure in England, the Kilburn horse is 318 feet long, 220 feet high and covers approximately 1.6 acres.  It can be seen from the northern outskirts of Leeds (approximately 28 miles) and is said to be visible from as far away as 45 miles (in Lincolnshire).   Originally cut in 1857 the work was financed by a Kilburn resident called Thomas Taylor, with the cutting being undertaken by a local school master called John Hodgson and 20 helpers.  During the Second World War the white horse was covered over so as not to provide a landmark for enemy bombers.  The white horse is definitely best viewed from a distance - the closer you get the less of it is visible! 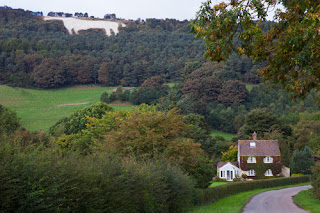 Approaching the White Horse at Kilburn


Our walk climbed steeply up the side of the hill, emerging above the white horse from where we had a very pleasant walk along the edge of Roulston Scar, past the Yorkshire Gliding Club.  Along the way we watched the gliders soaring above and being towed off the edge of the cliff by a small plane – a thrilling sight to observe! 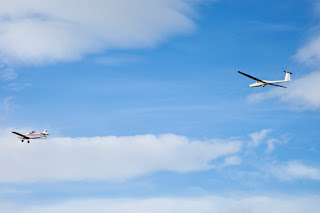 Glider being towed at the Yorkshire Gliding Club


This was the first walk I had undertaken since the purchase of the Think Tank camera carrying system; the subject of my previous blog entry.  It was a lovely, bright day with no risk of rain, and so I was able to carry my camera from my rucksack straps for the entire length of the walk.  It was very comfortable indeed (I just needed to take extra care when climbing over a stile) and I thoroughly enjoyed having my camera so easily accessible.


It was quite a tiring walk, with fairly steep climbs here and there.  This just left me with a longing to climb another Lakeland peak or two.  And so I started to think about a return trip to the Lake District, which will be the subject of my next blog entry.
North York Moors