The main focus for our first walk in November was the group of rock formations known as the Bridestones which are in the North York Moors National Park on the edge of Dalby Forest.

Setting off from the car park at the Hole of Horcum, our walk was a circuit of nine miles which started by following an ancient track known as the Old Wife’s Way.  Today this is a popular cycle track across the moors, but the origins of the name probably refer to ancient fertility rites associated with an earth mother or goddess known as “the old wife”, and the track actually leads to a group of ancient standing stones.  On this particular windy November day, however, we only followed it for a short distance before turning off towards the forest.

Dalby Forest covers a total of 8,000 acres and is known as the Great Yorkshire Forest.  In the care of the Forestry Commission, it’s a popular place with a visitor centre, cycle tracks, footpaths, adventure playgrounds and lots of public events throughout the year.  Situated on the northern edge, just outside of the forest are the Bridestones, a group of natural rock sculptures formed from alternating layers of hard and softer sandstone.  The unusual shapes have been created by the wind, rain and frost erosion over the centuries. 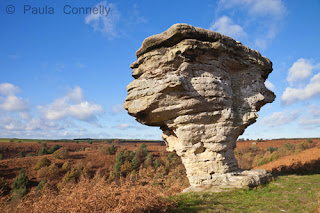 One of the "Bridestones"


Our walk approached the Bridestones from the north, taking us through the uppermost area of rock formations before descending into the forest itself.  The rock formations are divided by a steeply sided narrow valley and so to visit the lower Bridestones we had to walk back out of the forest and climb back along the opposite side of the valley to where we had previously walked.  We rested for a while and ate a snack whilst exploring some of the unusual caves and arches carved into the rocks before heading back towards the Old Wife’s Way to continue our circular walk. 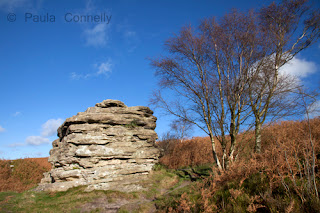 
Our route now took us by the foot of Blakey Topping, a conical shaped hill believed by some to be a “sacred hill” due to the location of a stone circle close by.  As we walked along we could see a large group of people making their way up the hill.  I imagine the views from the top would make it worth the climb and I made a mental note to include this in a future walk. 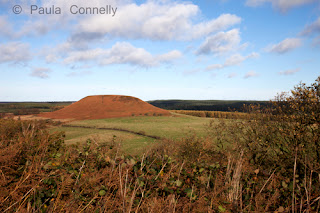 
For now though our route was heading northwards along a valley and towards a stone moorland cross known as Malo Cross.  Bizarrely, one of the fields we crossed contained a solitary llama who seemed as surprised to see us as we were him! 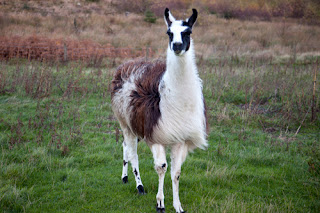 It was getting quite late in the day now (it being winter and the days being much shorter) and so the light was quite poor when I came to take a photo of Malo Cross, which marks a point on an ancient pannierman’s way across the moors.  In the 19th century the cross apparently disappeared but was found again in 1924 in a private garden in the nearby town of Pickering and was then returned to this, its original location.  I also made a note to return here to get a photo in better lighting - something I can combine with an ascent of Blakey Topping in the Spring. 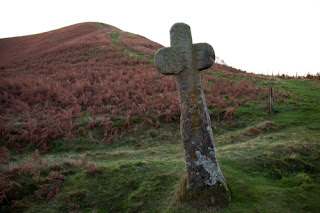 
From the Malo Cross our path took us around the edge of Saltergate Brow from where we had views across the moors to RAF Fylingdales, a radar base and ballistic missile early warning station.  Its primary purpose is to give the British and US governments warning of impending missile attacks (known as the ‘four minute warning’ during the Cold War), and in addition to this it can also detect and track orbiting objects in space.  These days the station consists of just one pyramid building, but several years ago there was a group of large white orb type structures.  Known locally as "the golfballs", they were something of an iconic sight.  I felt a little uneasy taking a photo around here!  Was it watching me? 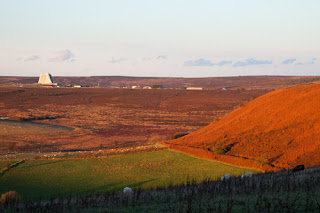 
The sun was setting quite quickly as we returned to our car at the Hole of Horcum car park.   Had there been more hours of daylight available to us I would have liked to have included a climb of Blakey Topping into the walk, but as daylight faded I realised we’d have to leave that for another walk.


Incidentally, if anyone who reads my blog would like more information on any of the walks we’ve done, such as map details or route instructions, I would be only too happy to share.