Cloughton to Robin Hood's Bay on the Cleveland Way

- January 14, 2014
Here we are, two weeks into 2014 and I still have four walks remaining from 2013 to write about before I'll be up to date.  So, without further ado, there follows an amalgamation of two walks into one, covering a section of the Cleveland Way in North Yorkshire. 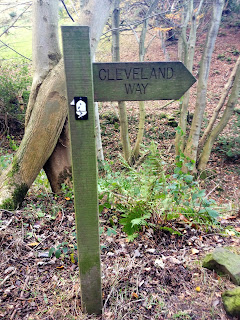 One of the problems with walking at this time of year is that the ground underfoot can be very soggy, if not impassable in places, and so towards the end of November I did a little research in an attempt to find a route that might be relatively firm and dry.   It didn't take long to find the perfect spot, not too far from home, being a section of the Cleveland Way from Cloughton (just north of Scarborough) to Robin Hood's Bay.


The Cleveland Way is a National Trail of 110 miles which begins in the North Yorkshire market town of Helmsley and ends on the coast at Filey Brigg.  It's very much a trail of two halves, with the first section following the Cleveland Hills along the edge of the North York Moors National Park before joining the coast for the second half along the Heritage Coast from Saltburn in the north to Filey in the south.  We walked approximately 10 miles of the coastal section over the course of two weekends, making each walk a circular route (of 12 miles and 9 miles respectively) by also following a path known as the "Cinder Track".  This is the route of the old Scarborough to Whitby railway which ran from 1885 until 1965 and today is used as an off-road route by walkers, horse riders and cyclists.  As the name suggests, the track was originally covered in ballast made from cinders and, although there are occasional muddy sections, mostly the walking conditions are very easy.  Also, with it having once been a railway, none of the inclines are particularly steep which makes for a pleasant and easy walk. 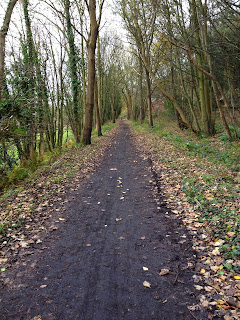 
Our first walk began at Cloughton which is a small village situated four miles to the north of Scarborough.  On this walk we began by following the Cinder Track for just over five miles to the village of Ravenscar.  Known locally as "the town that never was", until the end of the 19th century Ravenscar was called Peak.  The name was changed when a local entrepreneur decided to turn the village into a seaside town to rival the likes of nearby Scarborough and so a large hotel was opened in 1895, followed by a golf course in 1898.  And so Peak became Ravenscar so as not to confuse it with the already popular Derbyshire Peak District.  Roads and sewers were built and plots of land sold to city dwellers for the construction of holiday homes.  However the plans were all doomed to failure, mostly because of the precarious nature of the route to the nearest beach and in 1913 the development company folded after only a few houses had been built.  Today Ravenscar is a strange place, its wide roads, abandoned railway line and a few large houses designed to be part of a town look oddly out of place on this remote and beautiful stretch of coastline. 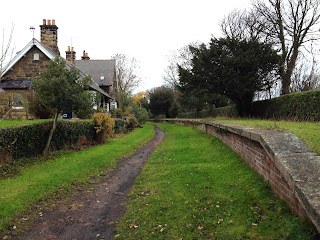 
From Ravenscar we left the Cinder Track and joined the Cleveland Way to return to Cloughton.  This stretch of coast was both beautiful and intriguing.  Looking down from the clifftop we could see what's known as an undercliff, which is to say the cliff below our feet dropped away to a broad ledge of woodland with a further cliff below that, the overall effect appearing positively Jurassic.  This section of coast is known as Beast Cliff and is a Site of Special Scientific Interest, in the care of the National Trust.  From above it looked as if there may be paths through the woodland, which is somewhere to possibly explore at a later date, but as the hours of daylight are short at this time of year, we continued back towards Cloughton.  The sun came out briefly, providing some much needed light for a photo, but sadly it didn't stay out for long. 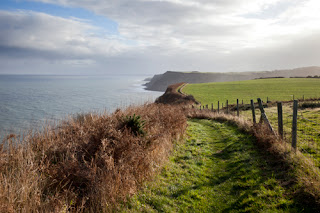 On the Cleveland Way between Ravenscar and Cloughton


Hayburn Wyke is a delightful secluded little bay surrounded by woodland walks, with a waterfall cascading onto boulders just above the beach.  By the time we'd reached here the sun was hidden behind clouds again and so we continued on our way towards Cloughton, making a note to return in better conditions. 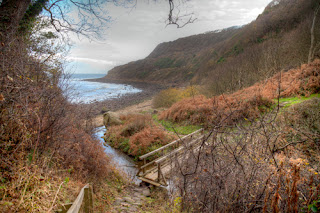 
We left this stretch of the Cleveland Way at Cloughton Wyke (in Yorkshire dialect "wyke" means small bay) just as the daylight was beginning to fade. 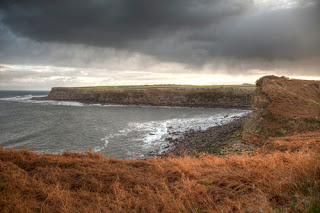 
As this had been such a pleasant and easy walk for this time of year, we returned to Ravenscar the following weekend to walk in the opposite direction, this time starting out on the Cleveland Way and walking for four miles up to the beautiful little village of Robin Hood's Bay.   It was very overcast and windy, so I took the decision to leave my camera at home.  Consequently the only images I have were taken with my iphone. 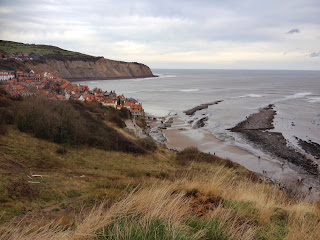 
I've often wondered how Robin Hood's Bay came by its name, seeing as it is over 100 miles away from Sherwood Forest and hardly likely to have been a regular haunt of the legendary outlaw.  There are various theories on the matter, the most likely explanation being that the name derives from the legend of an ancient tree spirit called Robin Goodfellow and over the centuries this has been gradually transformed into the more widely known Robin Hood.  It's all very vague, but one fact that's known for certain about Robin Hood's Bay is that in the 18th century it had the busiest smuggling community on the whole of the Yorkshire coast.  As you wander round its narrow alleyways it's not difficult to imagine the pitched battles that frequently took place between the local smugglers and the excise men. 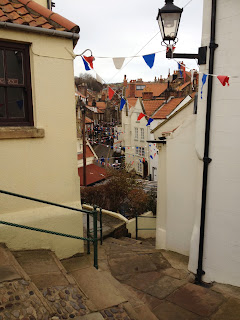 Alleyway in Robin Hood's Bay
Today this lovely little village is mostly busy with tourists,  even in the winter, and it's also well known for being the traditional finishing point of the Coast to Coast Walk.  Not an official National Trail, the Coast to Coast was created by Alfred Wainwright in 1973.  The 192 mile walk begins at St Bee's in Cumbria, crossing three National Parks (the Lake District, the Yorkshire Dales and the North York Moors) before finishing at Robin Hood's Bay.  The traditional way to finish the walk is to dip your feet in the North Sea, having done so in the Irish Sea at the start of the walk, and then leave a pebble on the beach which you picked up at St Bee's.  I'd like to bet that the next priority after this will be a visit to the appropriately named Wainwright's Bar.  It would be for me! 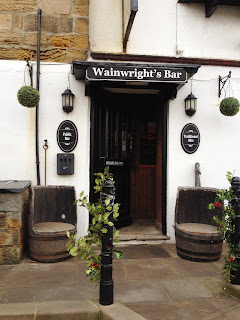 Wainwright's Bar at the end of the Coast to Coast


Our walk back from Robin Hood's Bay to Ravenscar was along the Cinder Track.  As the wind gathered strength I was grateful of the shelter the old railway embankment provided and the five and a half miles were covered quite quickly and comfortably.


Both of my walks along this stretch of the Yorkshire coast left me feeling I'd missed out on some excellent photographic opportunities.  The walks had been highly enjoyable and so I've made a note to return in the spring or summer when the days are longer and the light should be more favourable.
Yorkshire Coast