As the Christmas holidays approached and the annual hint of panic began to creep in (presents to buy, cards to write, cakes to bake and all that stuff), I couldn't see how we could find the time to go off walking amidst all the preparations.  Then I had a brainwave.  Why not combine the two?  A favourite walk AND a Christmas shopping trip.  Hadrian's Wall provided the ideal solution - a walk along the wall followed by a night at my "hotel of the year" (The Centre of Britain, Haltwhistle) combined with a trip to the Metro Centre shopping mall at nearby Gateshead.  Perfect!  And so that's just what we did, setting off very early on the first Saturday morning in December, arriving at a frosty Once Brewed Visitor Centre at around 10 a.m.  From here we set off on an eight mile circular route which we'd walked earlier in the year.  I don't usually provide route directions (this isn't, after all, just a blog about walking) but here I'm going to break with that tradition because this is such a great walk and so easy to follow.  A map isn't even really necessary, except perhaps for the latter part of the walk which heads away from the wall. 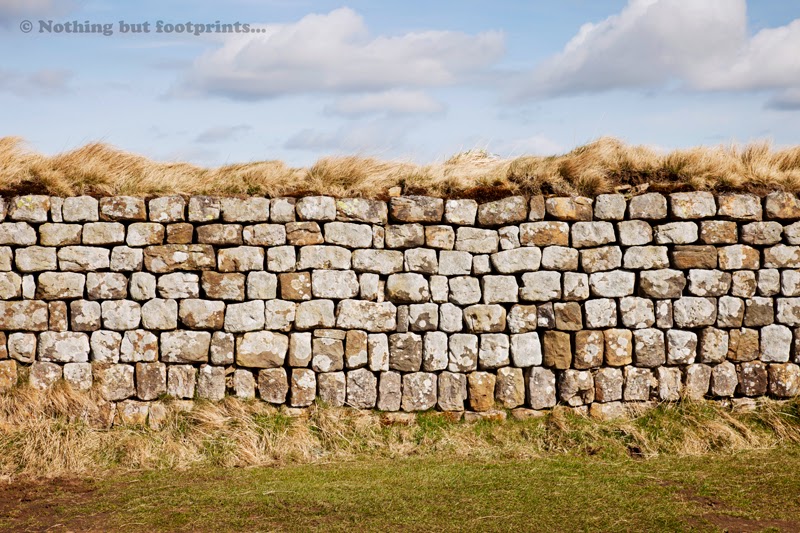 A section of Hadrian's Wall


The walk starts and ends at the Once Brewed National ParkVisitor Centre (car park, toilets and refreshments available) which is located near Haltwhistle on the B6318.  This is known as the Military Road which, seeing as it runs for most of its length along the wall, may instantly conjure up images of marching Roman legions. Not so!  It was actually constructed in 1746 by General Wade in the wake of the Jacobite Rebellion of 1745 and, sadly, a lot of the hardcore for its foundations was taken from parts of the wall.  There are some very long, straight sections along which traffic tends to travel at high speeds, so great care is needed when crossing from the Visitor Centre to a quiet, narrow lane that climbs uphill to the wall path at Peel Bothy (a small holiday cottage owned by the National Trust).  From here our route heads eastwards and at first simply follows the wall all the way to Housesteads fort.


The path is very well defined and paved in places, with stone steps at some of the steeper parts.  And there are plenty of steep sections...it's something of a rollercoaster of a walk!  Much of Hadrian's Wall is built along the Great Whin Sill - a rocky outcrop which is part of a huge sheet of rock that starts at the Farne Islands in the east and runs under the Pennines, formed by molten rock being pushed up from the earth's surface where it cooled and crystallised.


Right at the start of this walk there's a bit of a climb up Peel Crag, resulting in a fine view.  I should point out here that none of the images used to illustrate this walk was taken on this particular visit.  On this occasion I'd left my camera at home and so all of my photographs are from previous trips to the area.  Looking down from the top of Peel Crag you get an excellent view of Turret No. 39A and Peel Bothy, back across to Once Brewed and the countryside beyond. 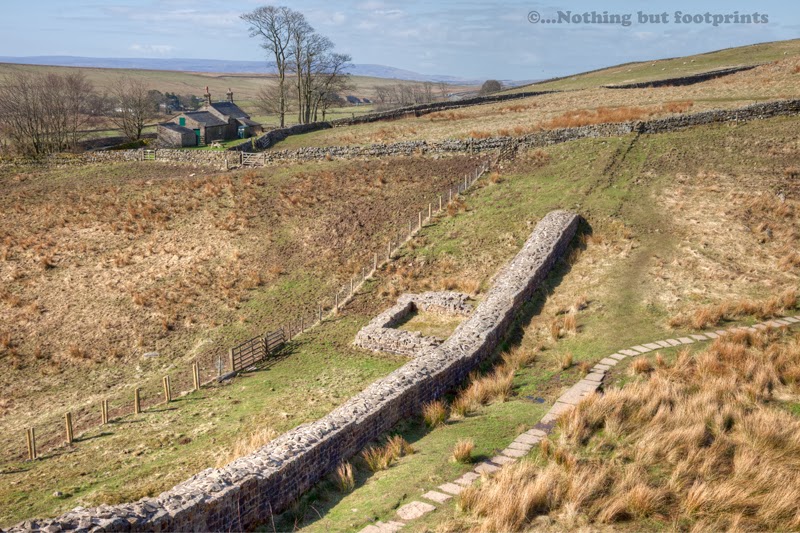 Turret 39A and Peel Bothy


This is perhaps a good point to provide a brief explanation of the naming and numbering of turrets and milecastles.


The construction of Hadrian's Wall commenced in 122 AD, during the rule of the Emperor Hadrian.  Originally measuring 80 Roman miles in length, it marked the northern edge of the Roman Empire (although for a period of 20 years from 142 AD the northern boundary was defined by the Antonine Wall which ran between the Firths of Forth and Clyde).   A milecastle was a small fort which acted as a guardhouse and gateway, placed strategically every mile along the length of the wall.  These have subsequently been numbered for identification purposes, beginning with Milecastle 1 in the east to number 80 in the west, although of course not all of the remains of all 80 milecastles and their associated turrets are visible today.  Two turrets were built at intervals of one third of a mile between each milecastle and these structures have also been numbered.  Each turret takes its number from the milecastle to its east followed by the letters A and B.  So the turret at Peel Crag is 39A - the first turret to the west of Milecastle 39.


Looking back a little further along the route gives a lovely view of Steel Rigg and up to Winshields which, at 1,130 feet, is the highest point on the wall. 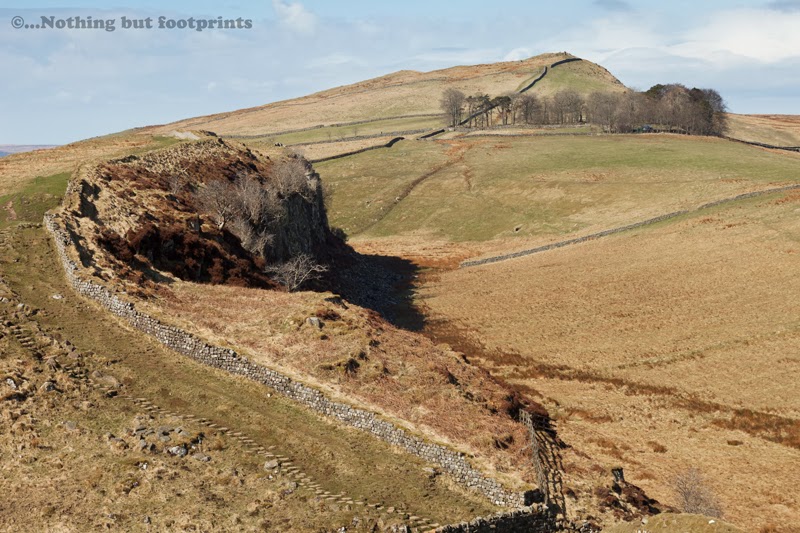 
The next stop along this route is Milecastle 39.   Archaeological excavations have taken place here several times, in 1908, 1982 and 1987, revealing that the site appears to have been occupied until the 4th century.  The undulating terrain on either side of Milecastle 39 makes it possible to get some really nice pictures. 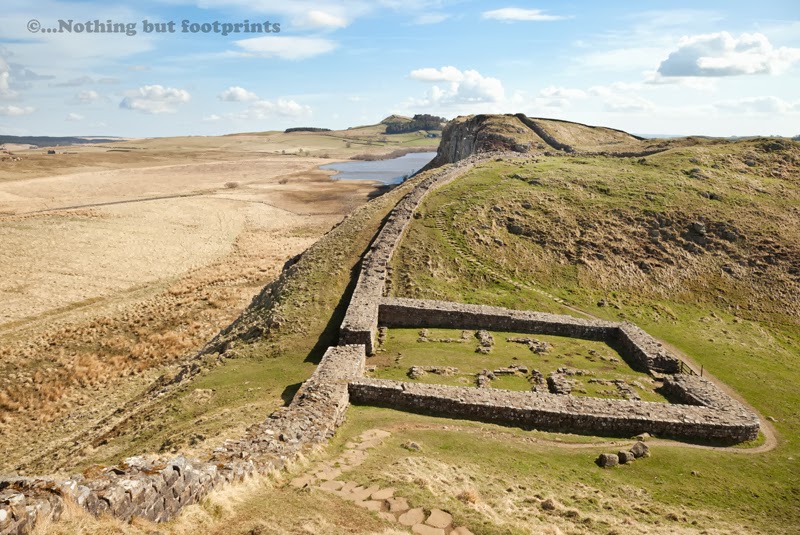 Milecastle 39 from the west 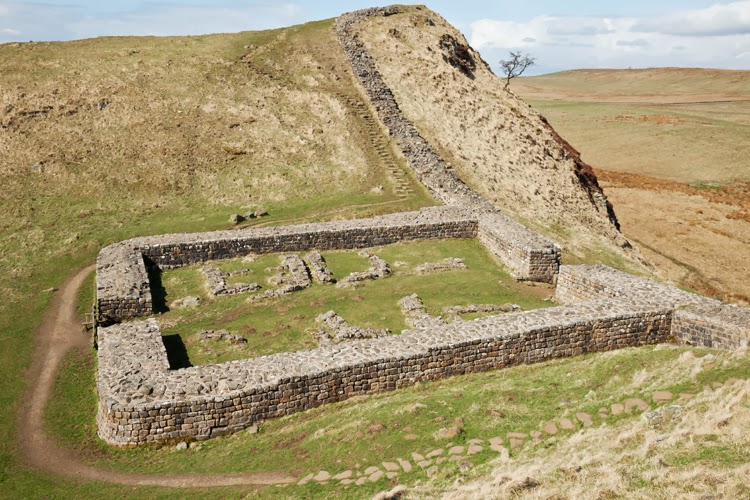 Milecastle 39 from the east﻿

Continuing a little further westwards bring us to the famous and highly photographed Sycamore Gap, perhaps best known for its appearance in a scene from the Kevin Costner movie Robin Hood: Prince of Thieves.  (I won't launch into my usual rant about all the geographical inaccuracies in that film...but if you really want to know more, I'll just refer you back to my very first blog entry!) 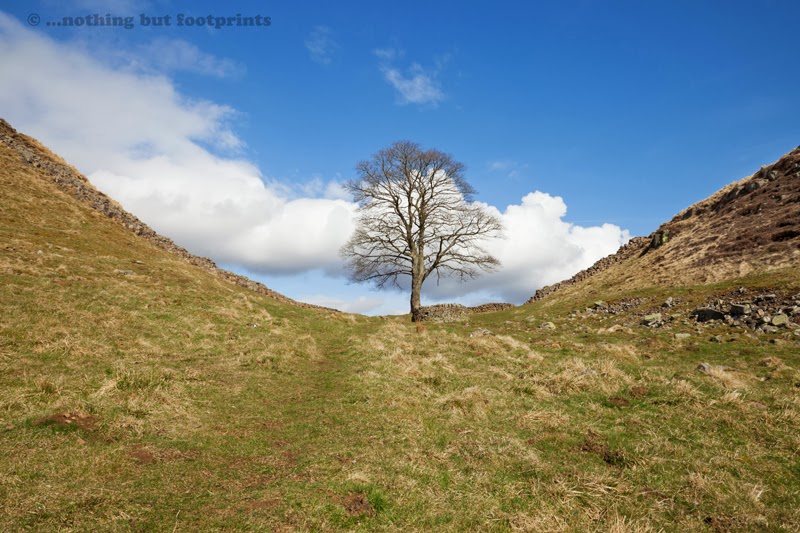 
The path now climbs above a small lake known as Crag Lough, a beautiful place to stop and admire the view for a short while before continuing on towards Housesteads. 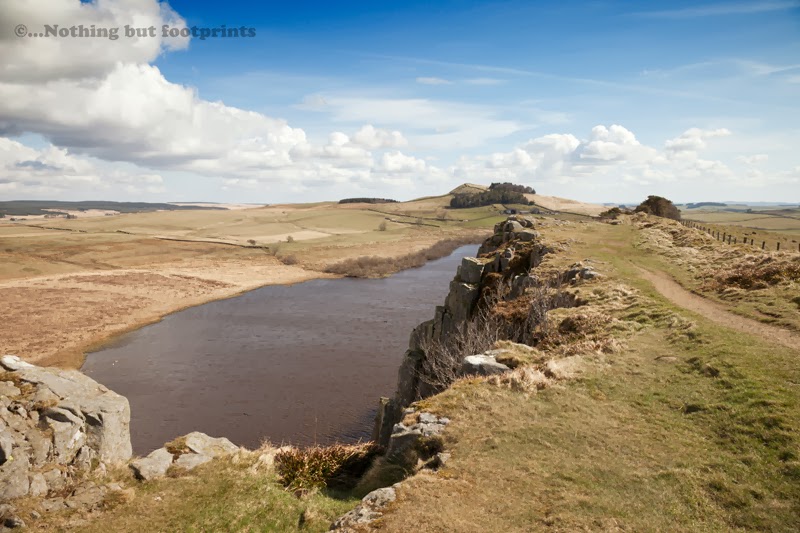 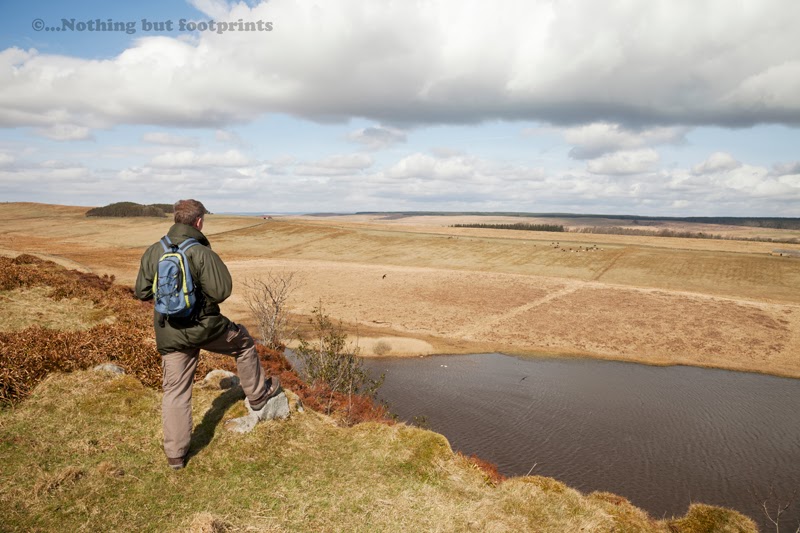 Looking down at Crag Lough


The path continues through a pine wood and then across a farm road, passing farm buildings before climbing back up to the wall at Hotbanks Crag and more spectacular views. 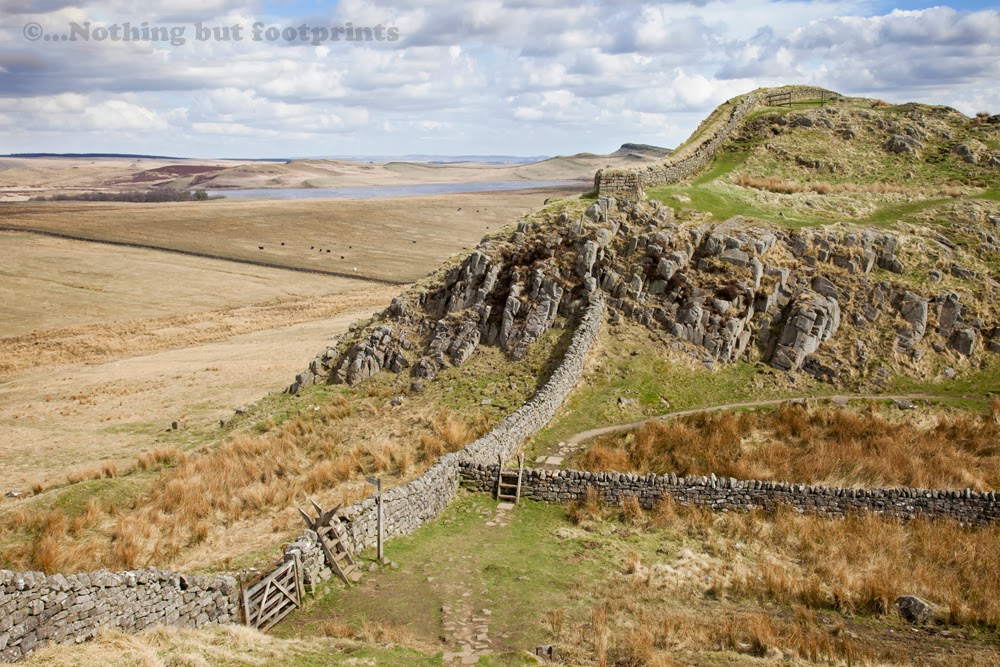 
Just to the west of Housesteads fort the walk passes by Milecastle 37, part of which has been reconstructed and is maintained by English Heritage. 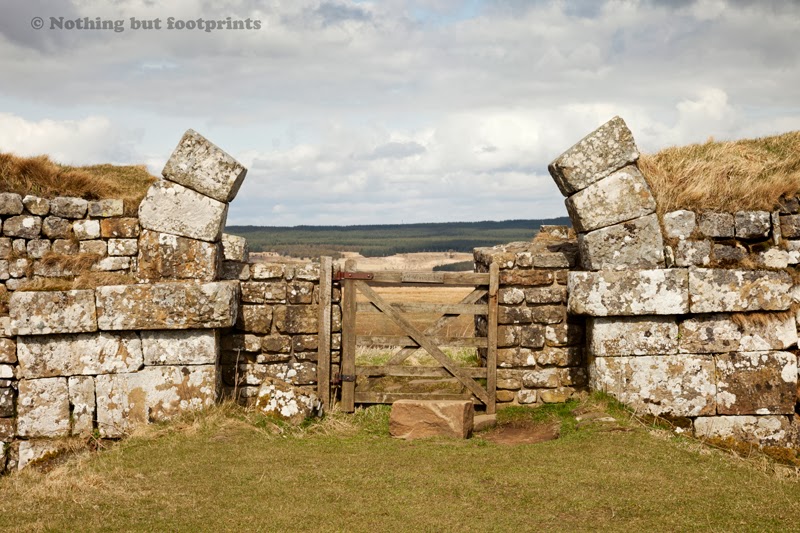 
From Milecastle 37 it's just a short walk to the Roman fort of Vercovicium, or Housesteads as it's more commonly known today.  The walk passes outside the actual fort and if you wish to visit it properly an admission charge is payable to English Heritage who also run a small museum close by and a newly refurbished visitor centre at the foot of the hill.  I didn't stop on this occasion as I've done so many times before, but I can certainly highly recommend a visit. 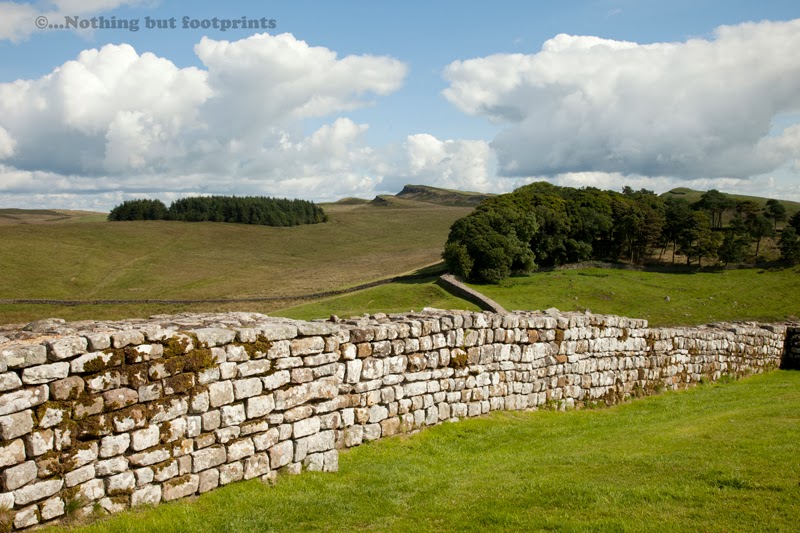 The wall at Housesteads 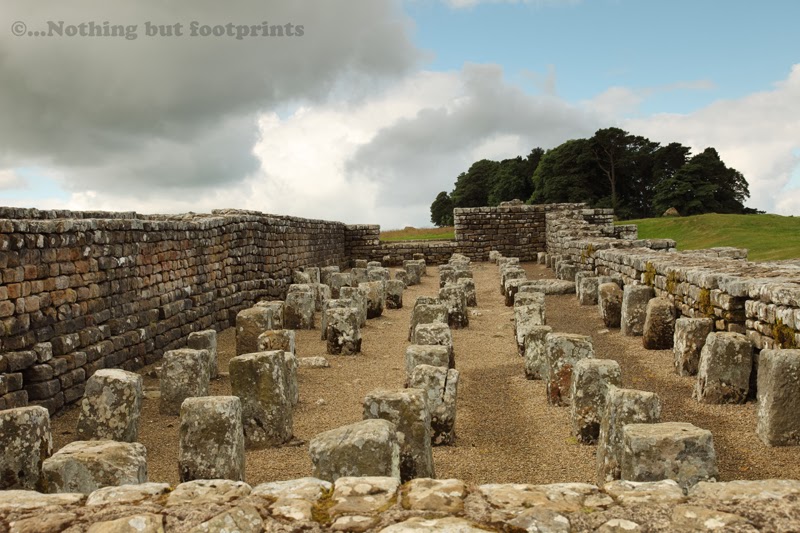 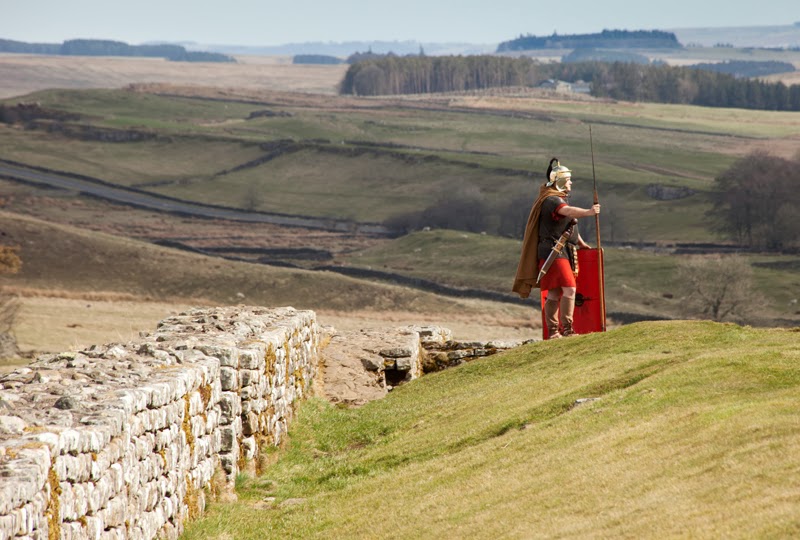 
From Housesteads our walk leaves the wall and follows a road from the museum down to the Military Road.  Care is needed here to make sure you follow the correct route which heads downhill to the right of the museum (not along the tourist's path to the car park and visitor centre).  The route crosses the Military Road (taking care as the traffic travels at great speed on this stretch) and over a stile into a field.  The path here is a little indistinct but looking ahead there's a col (a dip) between two hills where towards the top the path becomes a little clearer.  From this point the public footpath descends past a farm and then onto a farm road which leads to a country lane.  At the end of the farm track turn right onto the country lane.  A short distance eastwards there's a sign to show that this route is National Cycle Route No. 72 - Hadrian's Cycleway.  As you continue along this road it's worth making a little detour to see the Crinkledykes Limekiln, which is just 100 yards along the first lane to the right after the cycle route sign.  This 19th century limekiln was one of several in the area used to produce quicklime for use in agriculture and construction. 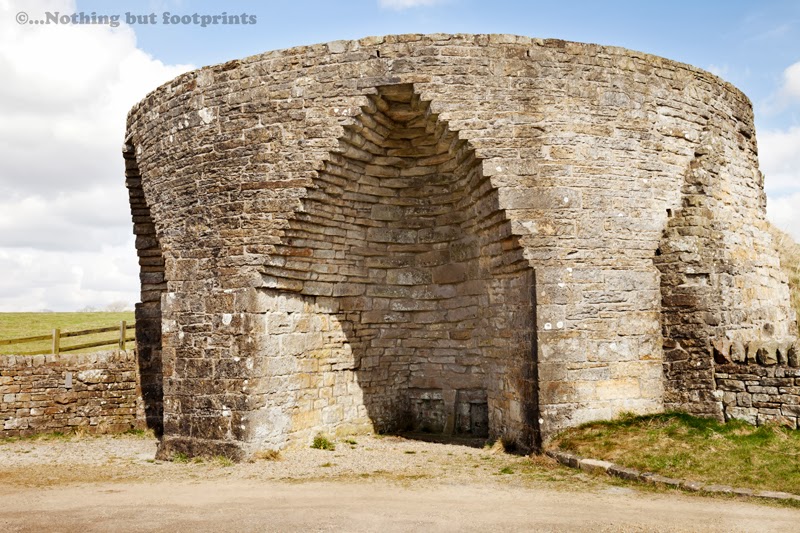 
The route continues back along the Hadrian's Cycleway to the Roman fort of Vindolanda, turning right at the signboard and passing by the car park, western entrance and perimeter of the fort.  Like Housesteads, Vindolanda is definitely worth a visit.  Owned by the Vindolanda Charitable Trust, the site has extensive remains of the Roman fort, excavations, reconstructions, a museum, cafe and gift shop. 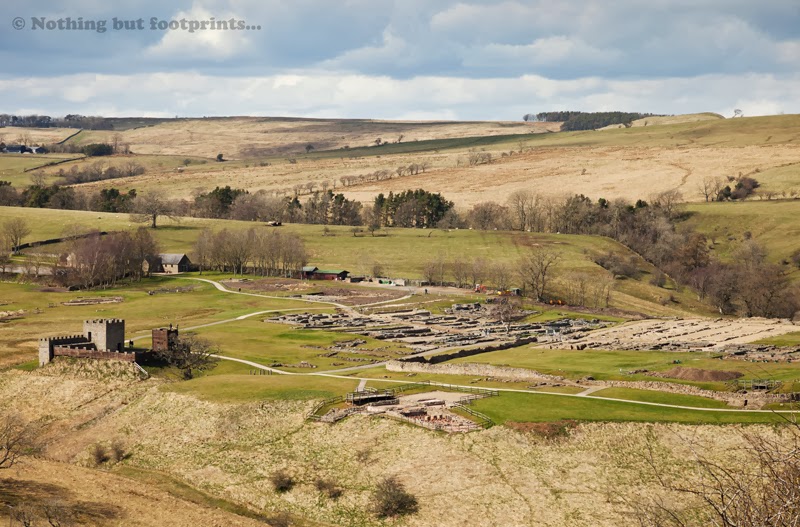 Looking down over Vindolanda
Perhaps most famously it is home to the Vindolanda Tablets, the oldest surviving handwritten documents in Britain.  The tablets are thin, postcard sized pieces of wood which have been written on with a carbon-based ink and they record all aspects of life in a military fort in Roman times.  Many of the tablets are on view in the museum, along with transcriptions into English.  They're absolutely fascinating.  And for this reason alone I'd recommend reserving at least half a day to visit Vindolanda, if you haven't been before. 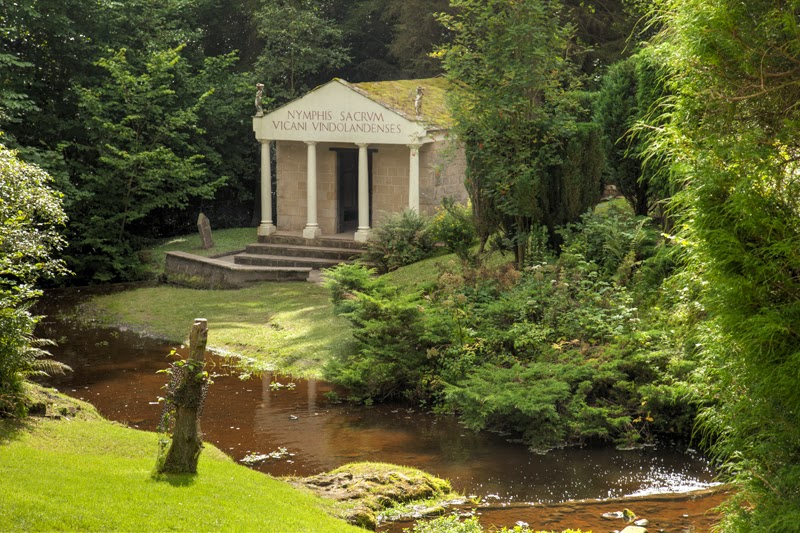 Reconstruction of a temple at Vindolanda


The last part of our route leaves Vindolanda by following the lane that leads to the fort's main entrance (this road can be busy at times).  This is actually a Roman military road called the Stanegate (stone road in Old English) which ran from Corstopitum (Corbridge) in the east to Luguvalium (Carlisle) in the west.  It's not far back to the Once Brewed Visitor Centre from here - just turn right at the end of the lane and walk along the road for about half a mile or so.


As we were familiar with this route and didn't stop for too long at any one particular place this time, we completed the eight mile route in just over three hours, giving us plenty of time to drive into Haltwhistle for a hot drink and a snack before checking in to the Centre of Britain.


This was a wonderful way to spend a crisp and blustery Saturday in December.  I've tried to describe the route as clearly and simply as possible, but if any of my readers want any further details or directions, I'd be only too pleased to provide them.