- February 24, 2014
Apparently, this year we have had the wettest winter since records began.  So, even though the weather forecast was for clear skies and sunshine, I knew that the ground underfoot would be sodden pretty much anywhere we went.  Moors, Dales or Wolds, it wouldn't make much difference.  With that in mind, I plotted out a 12 mile route which involved  a good bit of walking on quiet country lanes, starting and ending at the Sutton Bank Visitor Centre in the North York Moors National Park.  Once again, I plotted this route myself and, if I say so myself, it was excellent.

It occurred to me after I'd written about my last two walks that incorporating the directions into the blog about the walk probably wasn't very helpful to anyone who wanted to follow in my footsteps.  Therefore this time I'm going to describe the walk and then add the directions at the end, along with a map.  That should enable anyone wanting to follow this walk to just cut and paste the text.  I hope this helps.

We love Sutton Bank.  It's a really special place for us for many reasons.  Mostly the view is what has brought us here time and again throughout our married life.  Sometimes just to have a picnic and watch the sun set, but more often than not it's a natural stopping-off place on our journey to and from the Yorkshire Dales or the Lake District.  There are also some lovely walks of varying lengths in any direction.  A fairly recently erected signpost at the visitor centre proclaims this to be "the finest view in England" and, whilst I'm not entirely sure about that, it is nevertheless spectacular. 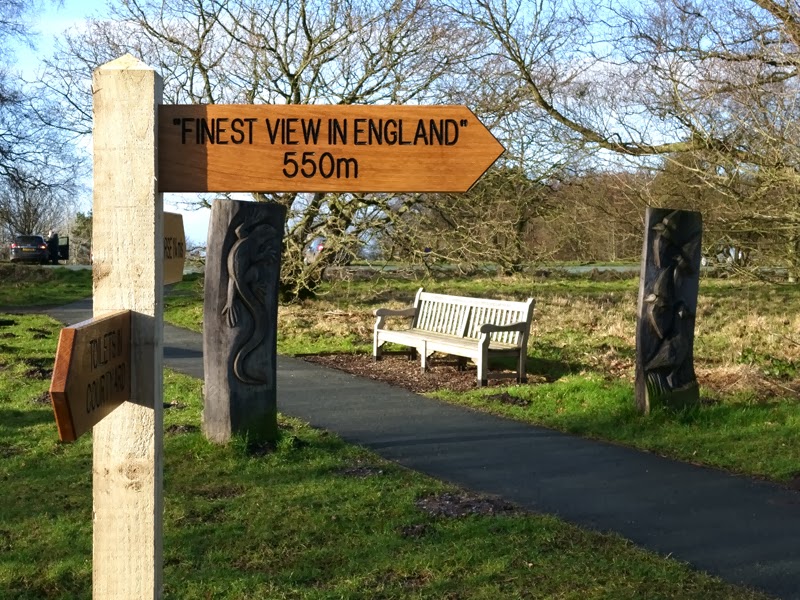 At the Sutton Bank Visitor Centre

My route for this walk took us northwards, above Lake Gormire and followed the escarpment for a couple of miles along the Cleveland Way.  The National Park authority make it perfectly clear where they think the best viewing point is because they've very kindly erected a viewing platform and a couple of benches in just that spot.  We stopped here for a while and drank it in, before striking out along the escarpment. 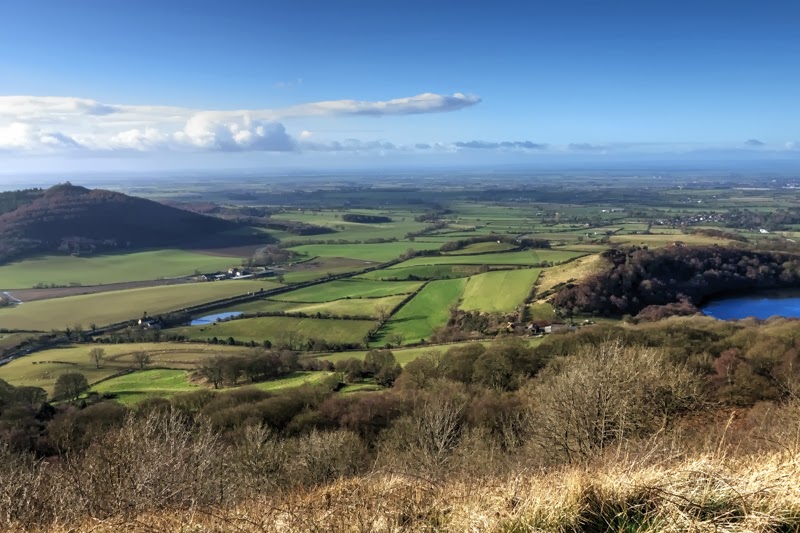 The finest view in England?

Even once the route turns in, to follow the Cleveland Way in the direction of Sneck Yat, the view is still lovely if not as expansive. 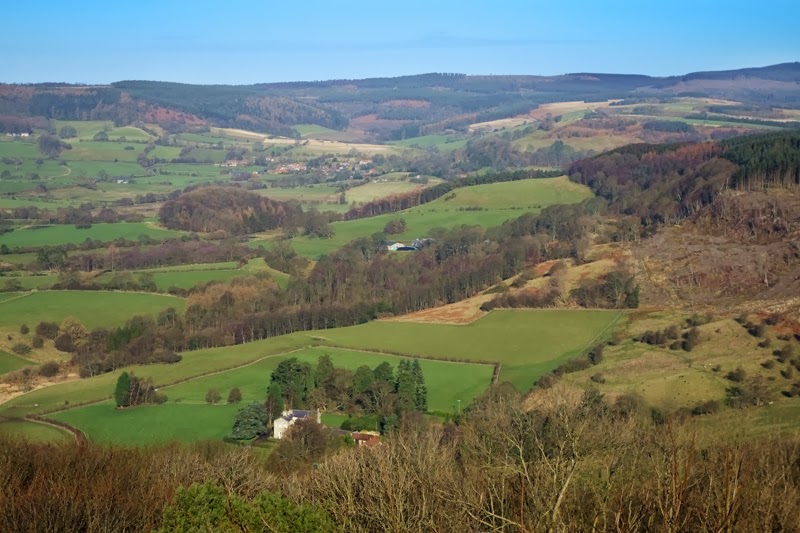 View from the Cleveland Way

Once off the Cleveland Way we followed a quiet country lane for a couple of miles to the little village of Old Byland.  Although this was quite a featureless part of the walk inasmuch as it merely entailed tramping along a lane, it was very peaceful and offered open views in all directions. 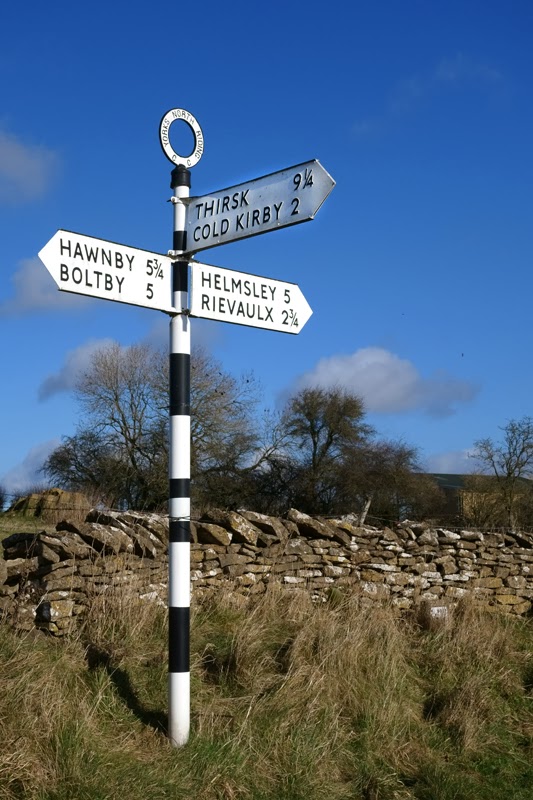 We could have continued following the road all the way to Rievaulx, but instead we cut across a field which took us to the top of a bank with yet more glorious views of the surrounding countryside. 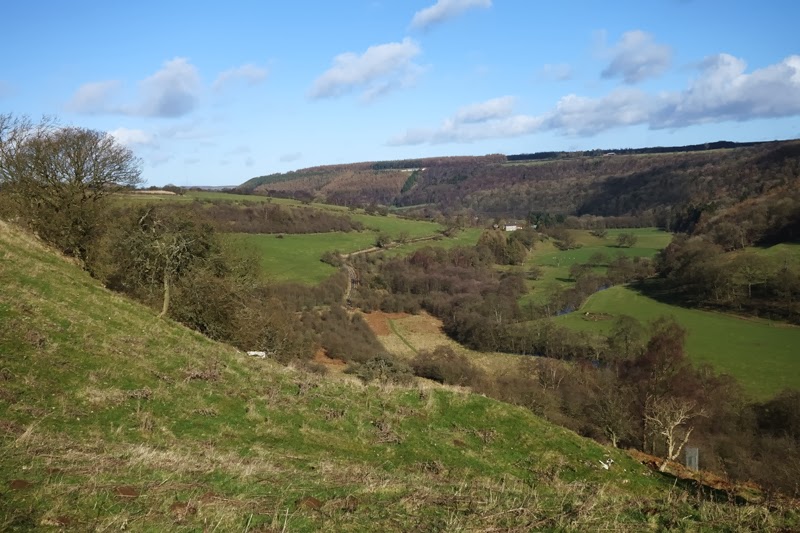 Before long the beautiful Rievaulx Abbey came into view at the end of the valley.  Even from this distance, the ruins look impressive. 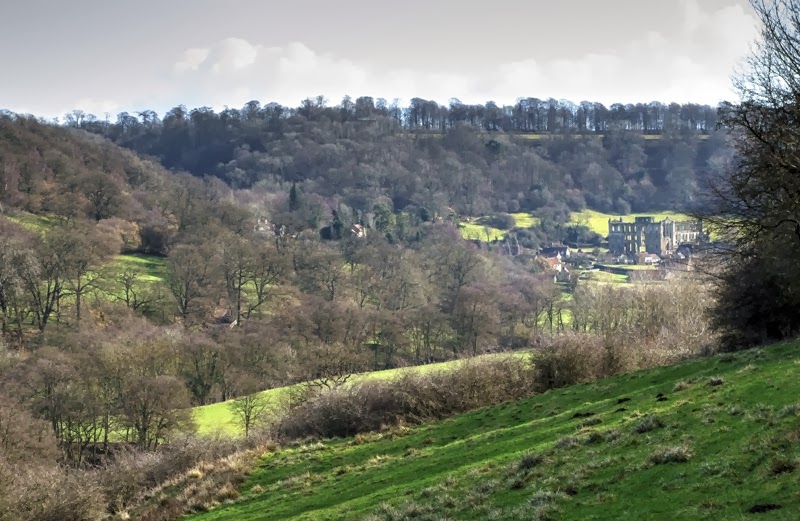 Up to this point we'd managed to keep our boots relatively clean, but as we approached the village of Rievaulx we could see that the River Rye had broken its banks and flooded our path.  Fortunately, it wasn't too deep and we were able to wade along the edge of the flood water without it coming over the top of our boots.  Times like this are always a good test for a boot's waterproofing and how well you have cared for them! 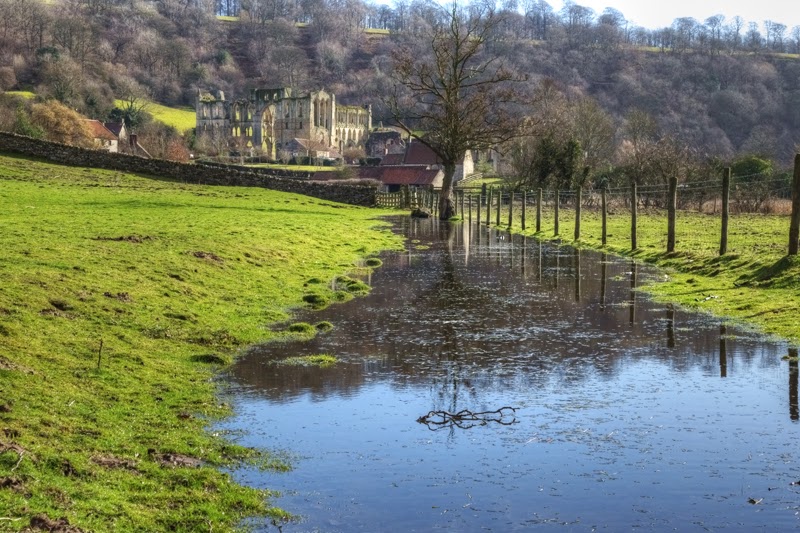 Rievaulx Abbey conveniently marked the half way point for our walk and so we decided to pay the entrance fee, have a look round and eat our packed lunch.  Rievaulx was the first Cistercian abbey in the north of England and was founded in 1132 after which time it was in use for 400 years.  At its peak the community consisted of 140 monks and 500 lay brothers and servants.  Its location by the River Wye is typical for a Cistercian monastery, which are usually found in wooded valleys by a source of water.  This enabled the monks to observe a strict life of prayer and self-sufficiency.  At the time of the Dissolution in 1538, Rievaulx was one of the wealthiest religious establishments in the country.  Today it's in the care of English Heritage and, although the admission price includes a free audio guide, on this occasion we just wandered around taking in the beauty of the place and reading some of the many interpretation panels provided throughout the ruins. 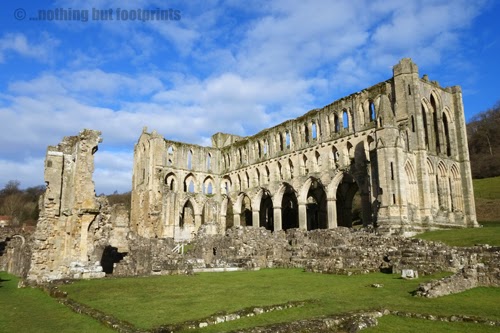 From Rievaulx our route followed the road until we could pick up the Cleveland Way again as it passed by a series of trout ponds on a tributary of the Rye.  It then took us along a beautiful tree-lined valley before climbing up and leading us to the picturesque village of Cold Kirby. 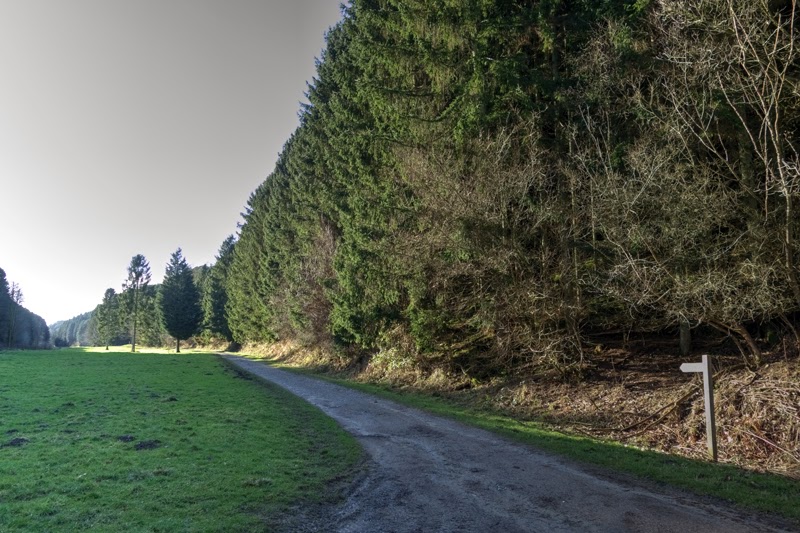 Along the Cleveland Way

Until 1314 the parish of Cold Kirby was administered by the Order of the Knights Templar, and then it was passed to another religious order, the Knights Hospitaller, who held it until the reformation after which time it became a parish church.   The present church of St Michael was built in 1841 to replace the original 12th century building. 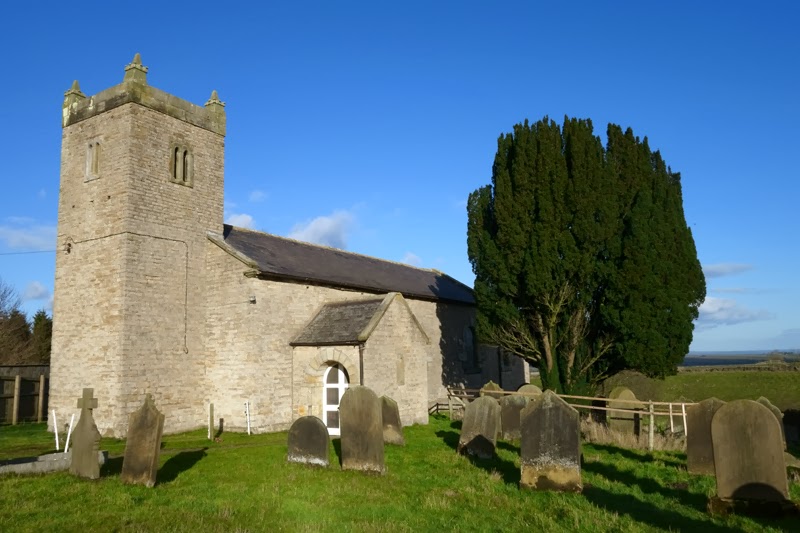 The route I had originally plotted was set to follow the quiet country road back to Sutton Bank, although we actually followed the Cleveland Way into the woodland and back to the car park.  The Cleveland Way begins in the nearby town of Helmsley, so the parts we had walked were the very early stages of this national trail of 109 miles which crosses the North York Moors and then follows the coast to the seaside town of Filey. 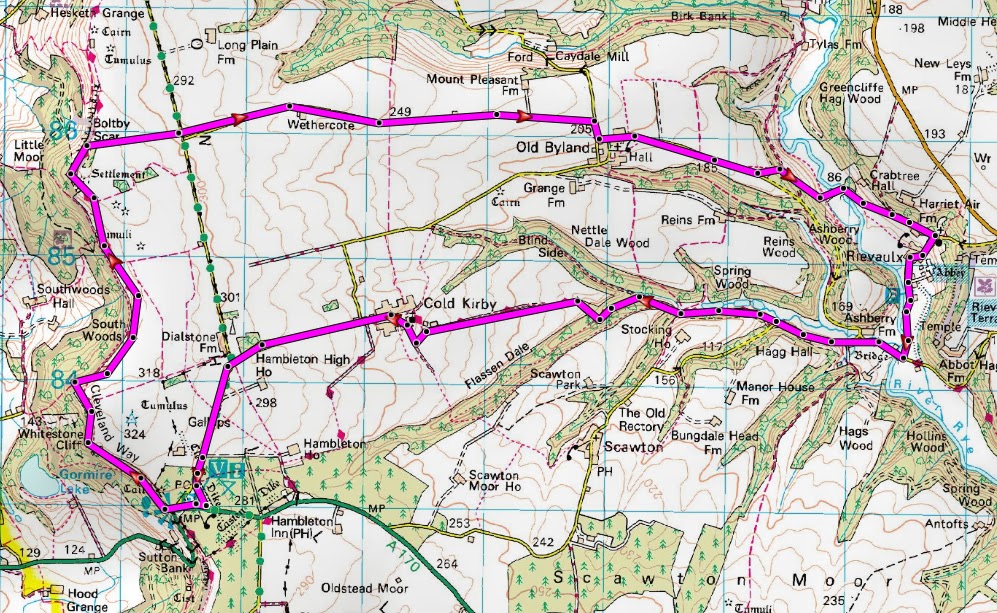 Leaving from the Visitor Centre at the top of Sutton Bank, turn right to follow the Cleveland Way in a northerly direction along the escarpment.  Continue following this path to Boltby Scar where a public foothpath to the right leads to a country lane at the junction with Wethercote Lane, which is sign-posted to Old Byland.  Follow this lane for a couple of miles to the village of Old Byland, and then continue along another quiet road sign-posted towards Rievaulx.  Keep an eye open for the third public footpath on the left which cuts diagonally across a field to a gate.  Once through the gate turn left and then after a short distance look out for a path which heads down a steep bank (this path is poorly defined ).  At the bottom of the bank turn right and follow a track to Bow Bridge which crosses over the River Rye.  After 100 yards or so a sign post for the Inn Way points across a field by the river which leads into the village of Rievaulx.  Turn right and either pass the Abbey or call in for a visit (there are toilet facilities, a cafe and a gift shop which you can use without paying admission).  From the Abbey continue along the lane to a junction, turn right here over a bridge and follow the quiet country road until a sign for the Cleveland Way points into a woodland track.  You can now follow the Cleveland Way directly to the village of Cold Kirby.  From here you can either follow the country lane back to Sutton Bank or take the path on the left just outside the village (sign posted to Sutton Bank) which emerges in woodland by the car park.