- March 18, 2014
What a joy it is to wake up and know you're in the Yorkshire Dales and, not only that, but the aroma of bacon and sausages wafting into your room means that breakfast awaits.   And someone else has cooked it for you.

Our hotel for the night had been the Racehorses Hotel in the centre of Kettlewell.  We had a room with a view of the Blue Bell, Kettlewell's other pub (which we hadn't visited).  All in all it had been a very pleasant short stay with good food, good beer and a very comfortable room.  The only minor downside had been the car park which was very cramped with cars packed in at all angles.  We decided to leave our car in the large village car park, although this had incurred a fee.   The evening meal had been outstanding (the hotel's speciality - beef suet pudding with handcut chips) and the beer (Timothy Taylor's) was very good too.

Contentedly stuffed with a Full English (also excellent - possibly the best sausages ever), we undertook a brief exploration of the village before heading out for our day's walk. Kettlewell was used to represent the fictional village Knapely in the 2003 film Calendar Girls.  It's a delightful little place, very popular with tourists,  and we were pleasantly surprised to find it has its very own outdoor store, Over and Under, selling a nice range of outdoor clothing, boots, socks, maps, etc.   After a pleasant half hour's browsing and shopping (it was nice to find a small independent retailer with some genuine bargains), we struck off on our day's adventure - an eight mile circular walk heading first of all in the direction of Starbotton. 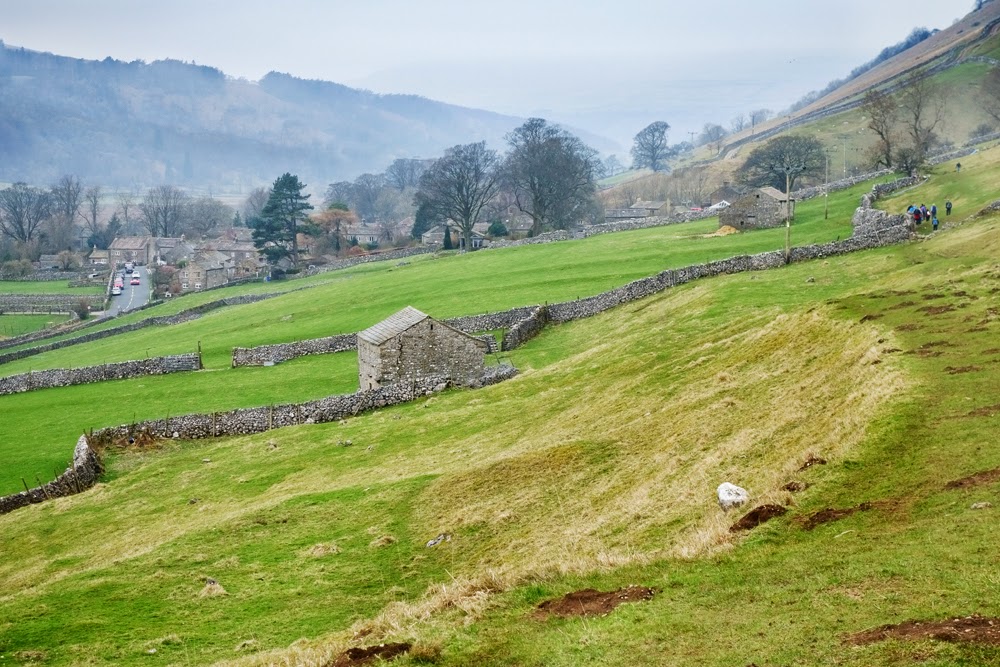 The first section of this walk was practically on the level.  After a short climb out of the village the clearly marked path cuts through fields along the valley for a couple of miles to the little village of Starbotton.   The unusual name apparently derives from Stauerboten, Old English for "the place where stakes are got".  That's "stakes" as in sticks, not "steaks" as in "with chips", sadly.  Although after a full breakfast it was a bit early for a steak.  But not for a beer!  The very quaint little Fox and Hounds pub served Timothy Taylor's ale and had some tables outside where we could sit and watch a steady stream of Harley Davidsons roar along the narrow lane.  Very nice.  If you like that kind of thing. 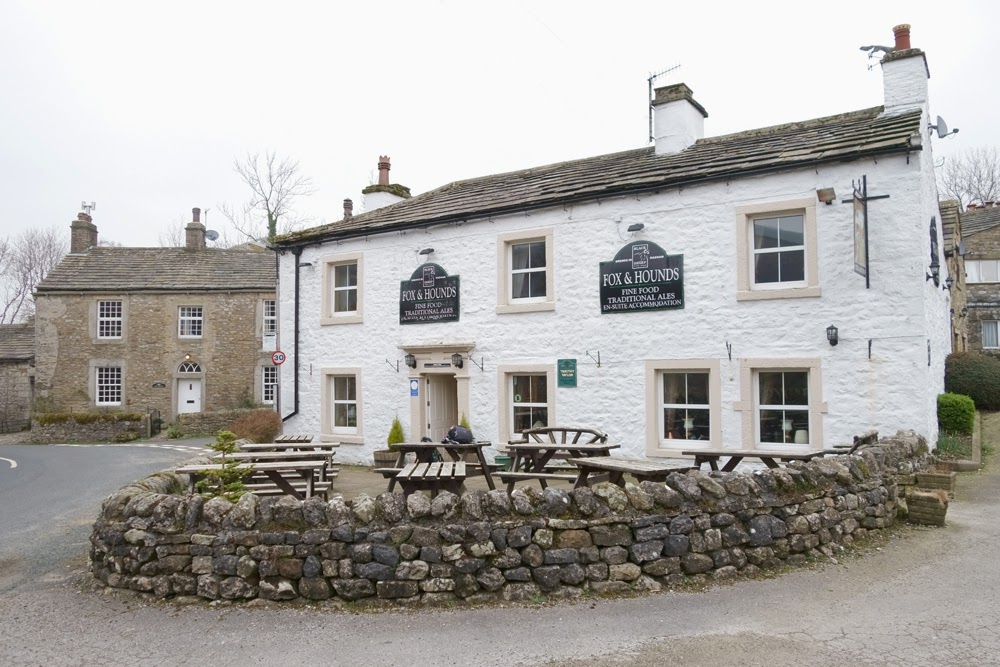 It was tempting to sit at the Fox & Hounds for a while longer and have another beer.  So that's just what we did.  But after the second we set off again, out of the village and across a footbridge over the River Wharfe.  I took a photo of the footbridge.  I'm not sure why but it suddenly seemed like the most attractive footbridge I'd ever seen.  I just had to take a photo of it which I'm rather disappointed to admit doesn't do justice to how lovely it looked on that overcast Sunday morning. 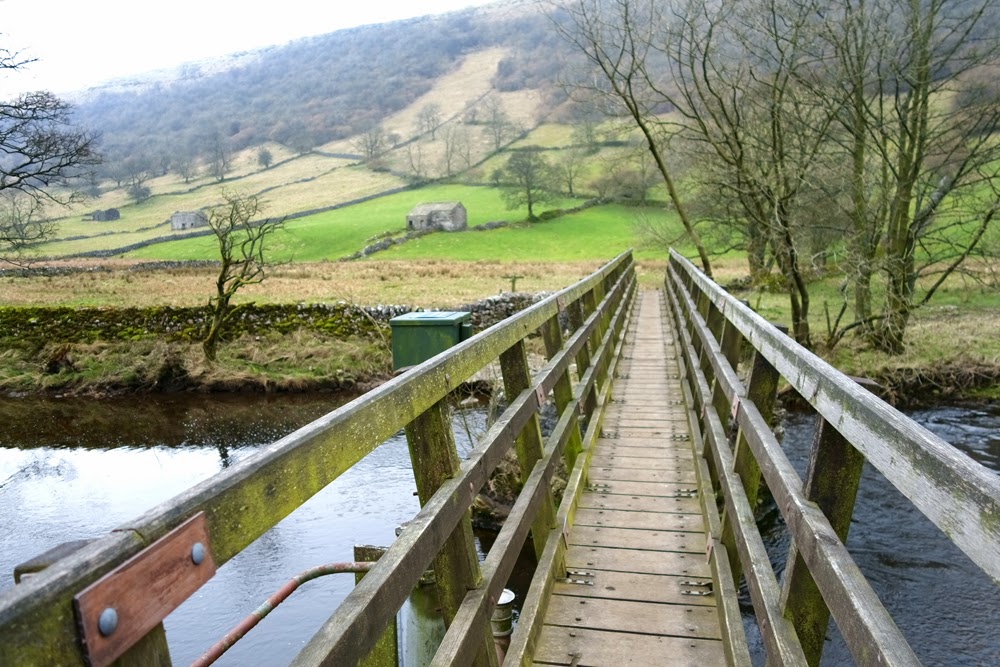 A truly beautiful footbridge (isn't it?)

Shortly after the lovely footbridge we came to a beautiful section of footpath, green and lined with moss.  I photographed this too.  I was in such a good mood. 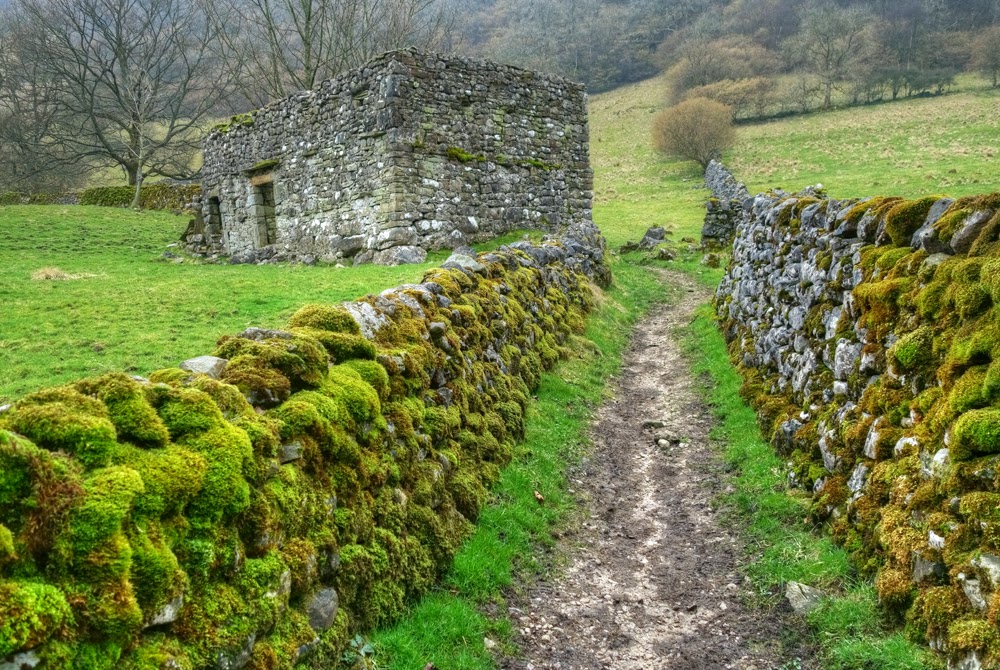 An enchanted dingly dell of a footpath

And then the climb began.  That soon brought me back down to earth, although in truth it was a fairly steady, gradual climb in stages, the first part being through a stretch of woodland.  I took a photo, but by this point the beer goggle lens had dropped off my camera. 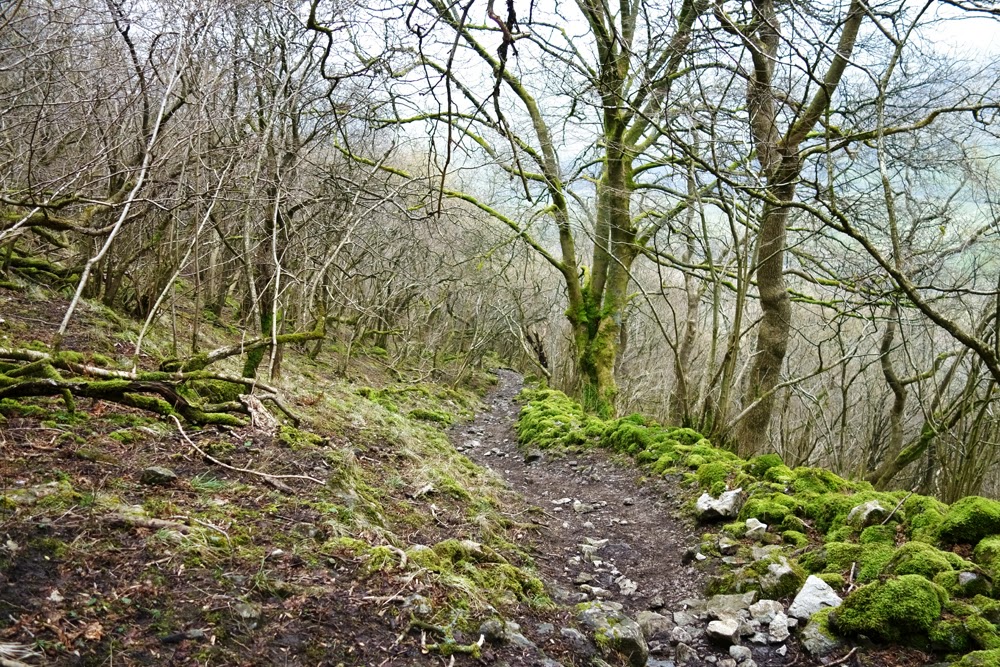 The path up through the trees

At the top of the first part of the climb we got a very pleasing view of the River Wharfe snaking its way through the valley below.  And then the terrain changed to open moorland, squelchy with bogs, climbing steadily upwards to a height of approximately 1,700 feet before a descent began towards the village of Arncliffe. 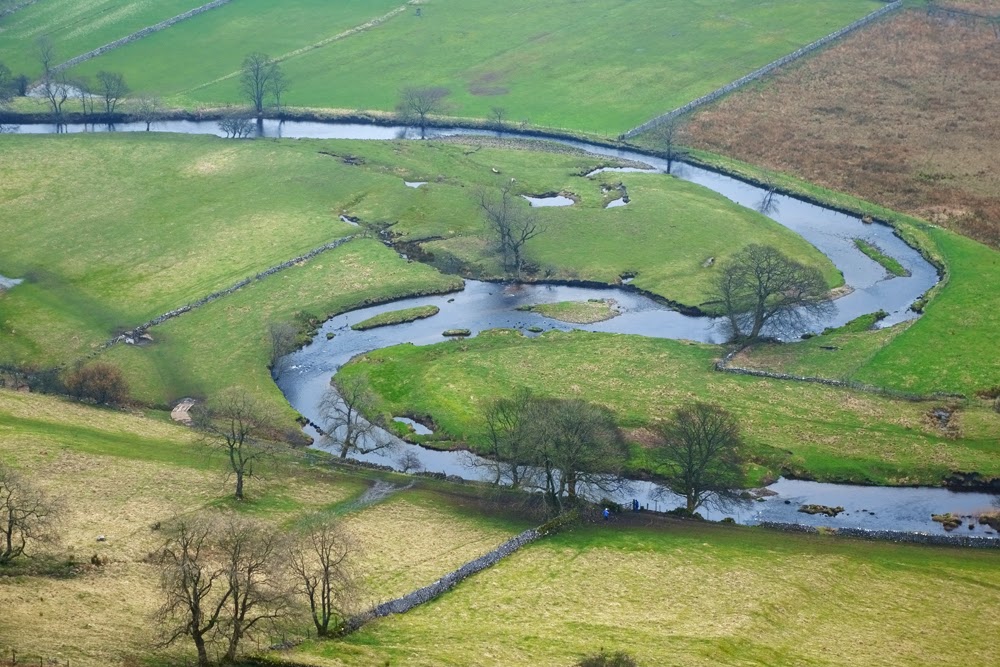 At the top of the climb the sun decided to put in an appearance and the landscape lit up before us, highlighting a lonely little house on the top of the moor. 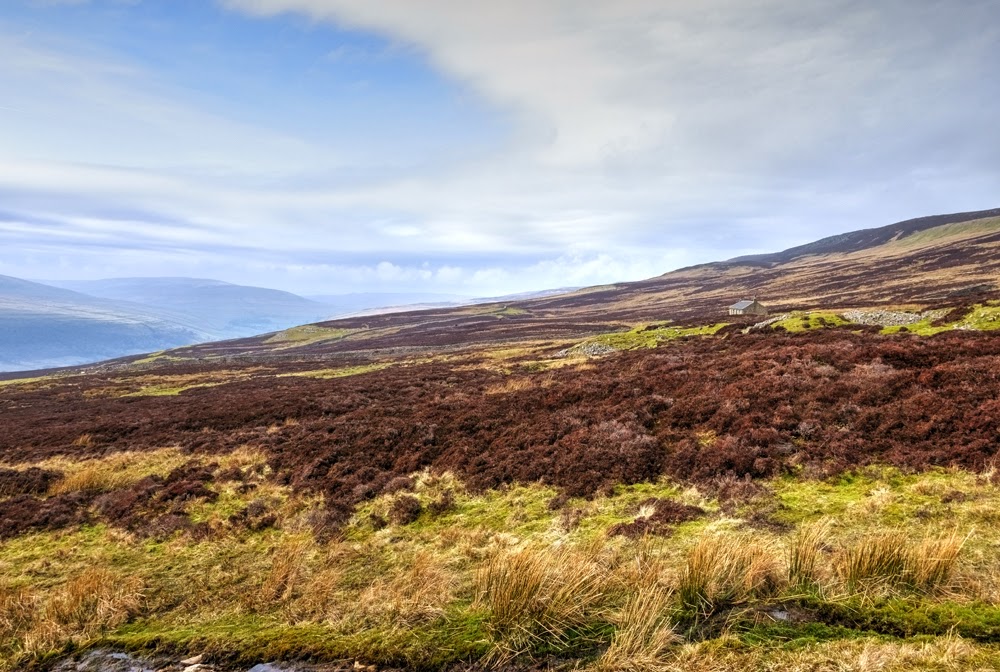 As we gradually descended my camera seemed to find its beer goggle lens again and I was struck by the beauty of a curving drystone wall. 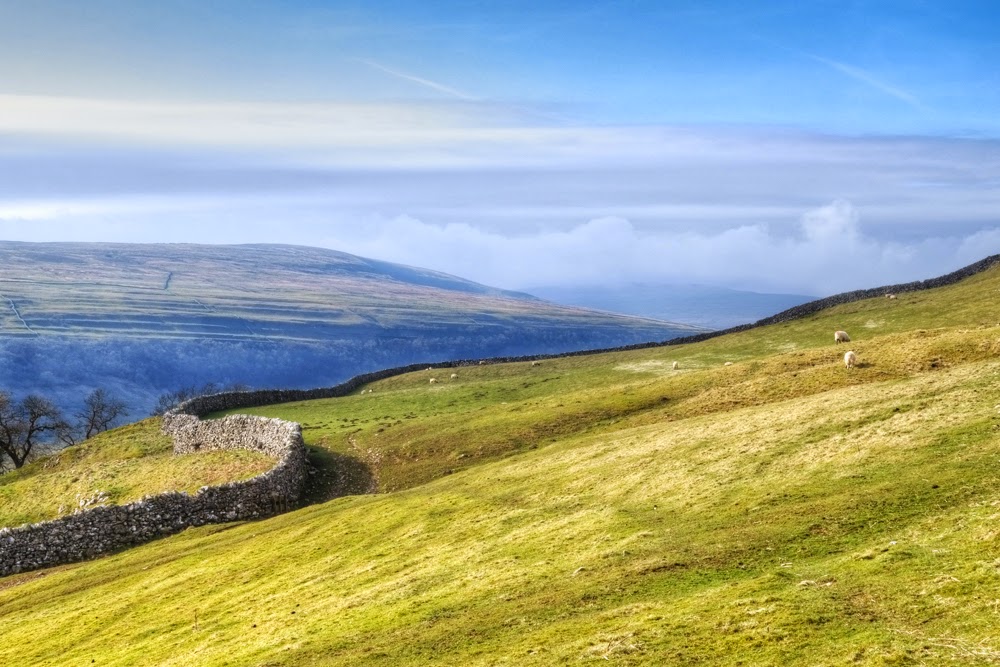 And three trees growing out of a limestone scar.  I have a particular fondness for improbable trees.  Ones that seem to cling on in the most precarious of circumstances. 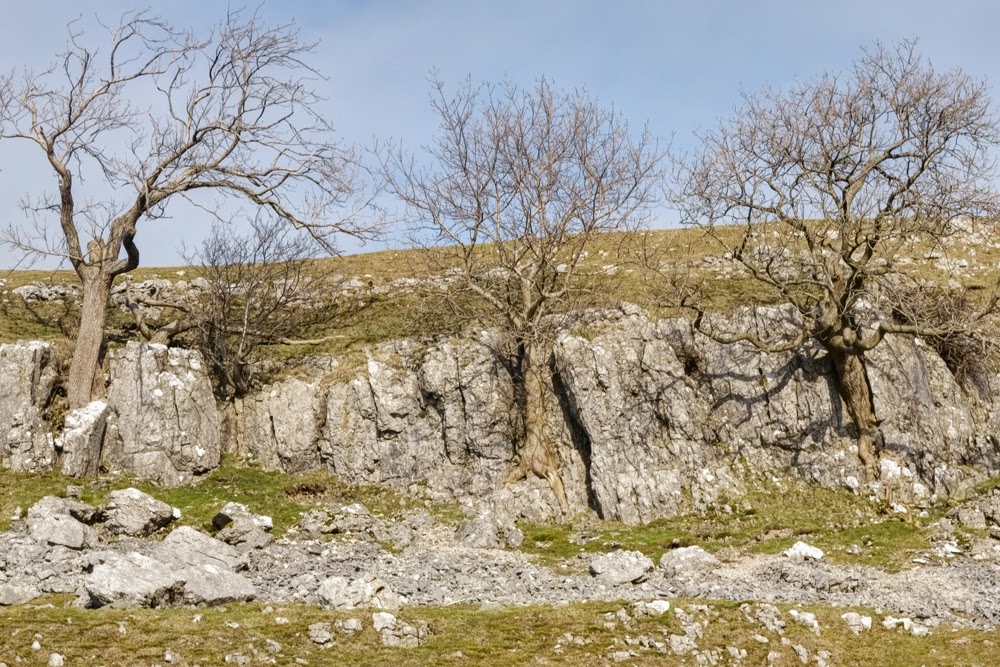 At the bottom of the hill we came to the beautiful little village of Arncliffe, the largest of three settlements in the valley of Littondale, situated on the banks of the River Skirfare.  Our route was actually scheduled to bypass the village and continue back over the hills towards Kettlewell, but I'm very pleased we took a slight detour.  It's a picture-postcard-pretty village.  And home to a delightfully quirky little pub, The Falcon.  Here the beer is served in the traditional manner, from barrel  to glass via a porcelain jug.  It would have been a shame not to try this and we weren't disappointed. 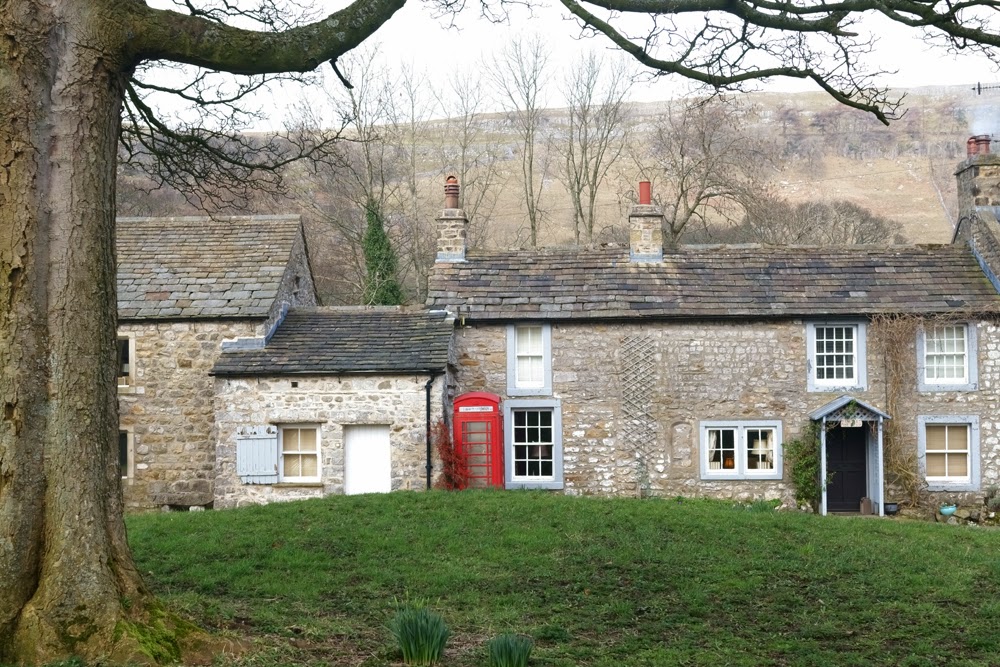 
The sun was still shining as we headed away from Arncliffe and, looking down Littondale, the landscape was typical of the Yorkshire Dales - hills, drystone walls, a barn and sheep.  I love this type of landscape, and that's why I've had this particular image made into a framed canvas which is going to be the prize for a forthcoming competition on my Facebook page.  Be sure to give the page a like if you'd like to be in with a chance of winning it! 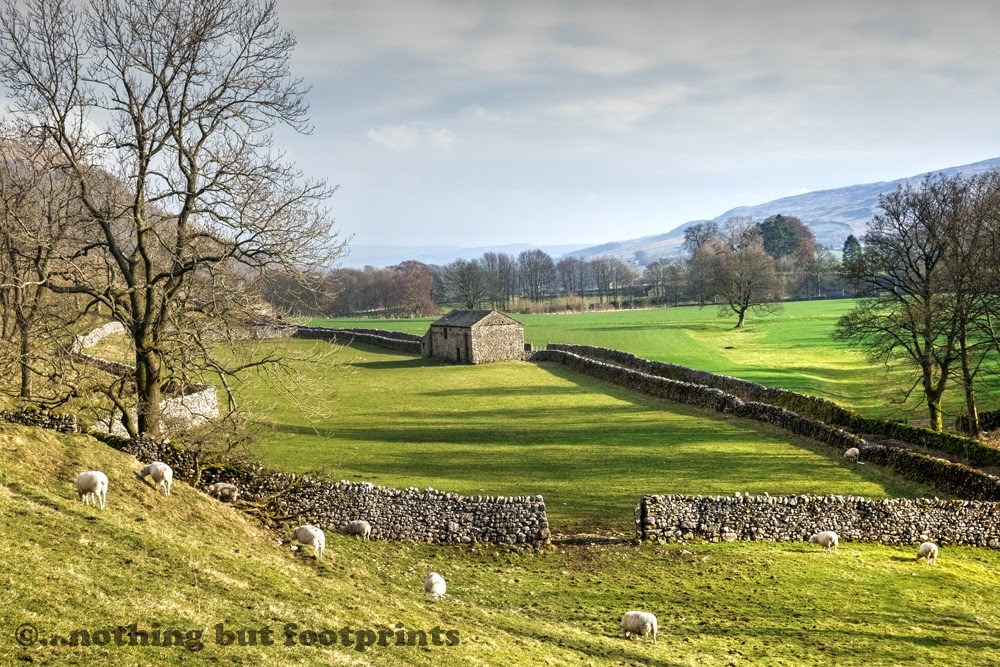 From Littondale we had another steady climb (this time to a height of 1,500 feet) back up onto moorland.  The sky was filling up with cloud again and overhead a small group of paragliders circled and swooped.  I watched them for a while and wondered just how much they could see from their altitude.  After a couple of glasses of beer a bush or wall provides a handy convenience.  But not when a group of guys are swirling overhead.  My pace quickened in the direction of Kettlewell. 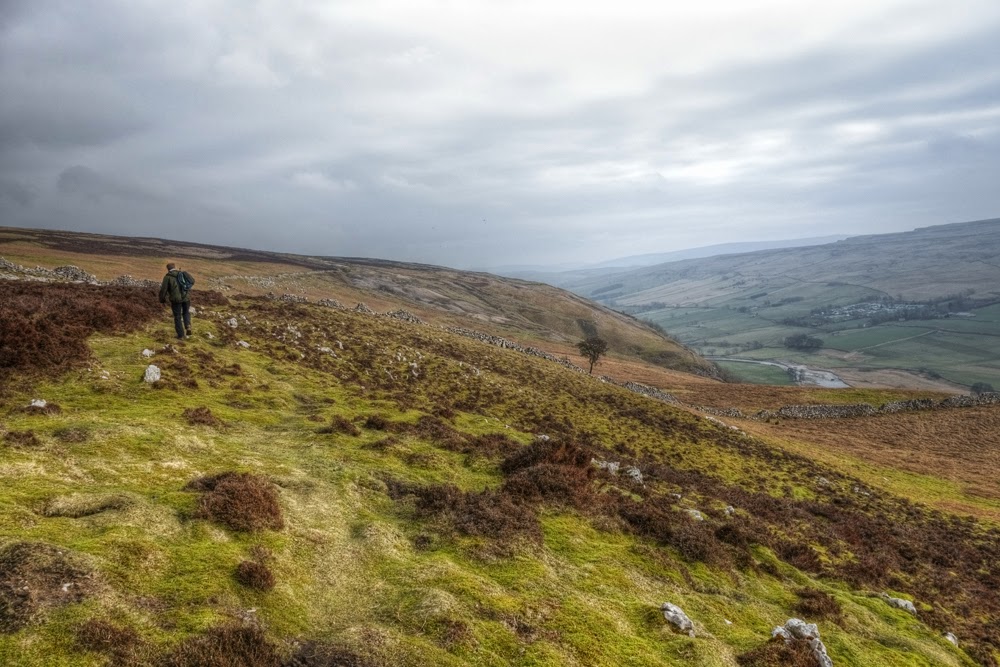 On the moorland above Littondale

Before descending back towards Kettlewell the walk had one last little surprise for us.  A short downwards scramble through a gap in a limestone crag, after which a hazy view of Wharfedale revealed itself. 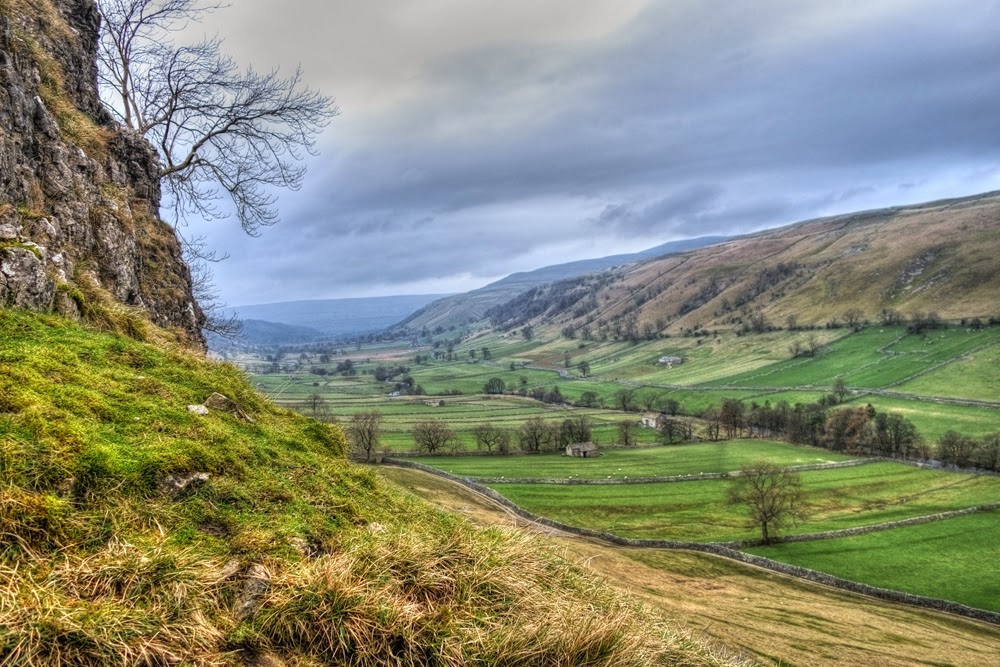 
And then there was Kettlewell again, nestling snugly in the valley below.  We could see our car from this vantage point.  And several coaches in the car park.  It was a pleasing view to savour at the end of what had been a highly enjoyable walk.  I was sorry that we would soon be leaving the Dales.  The walking , like the hospitality, is so enjoyable.  However, I knew it wouldn't be long before the temptation to return got the better of us. 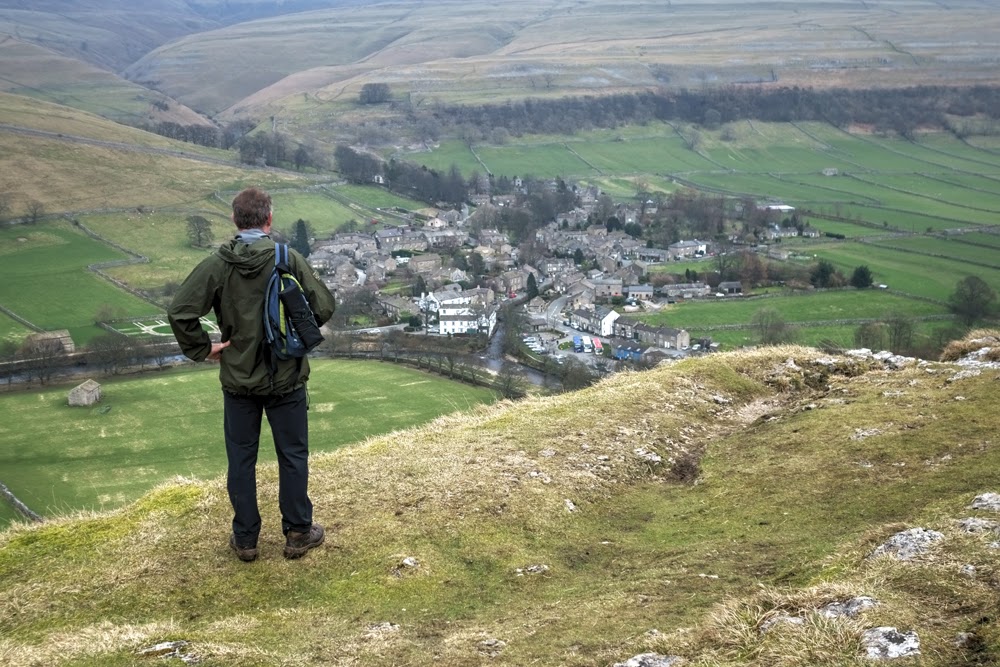 Looking down on Kettlewell


Directions for this walk:

From the centre of Kettlewell walk up Far Lane to Cam Garth where a public footpath sign points in the direction of Starbotton.  This path will take you all the way to the village where you can either turn right to visit the pub or cross the road to join the public footpath to a beautiful footbridge over the River Wharfe.  This path climbs steadily uphill, through woodland to begin with and then upwards onto open moorland.  From here the route is clear all the way to Arncliffe, down the other side of the hill.  If visiting Arncliffe, leave the village by a path across the river from the church to a lane.  Cross the lane and look for a footpath over a field and uphill through tree cover which emerges onto open moorland again.  At the top of the hill turn right and follow the path over the hill and down again to Kettlewell.  Total distance is just under 8 miles with refreshment available at Starbotton and Arncliffe. 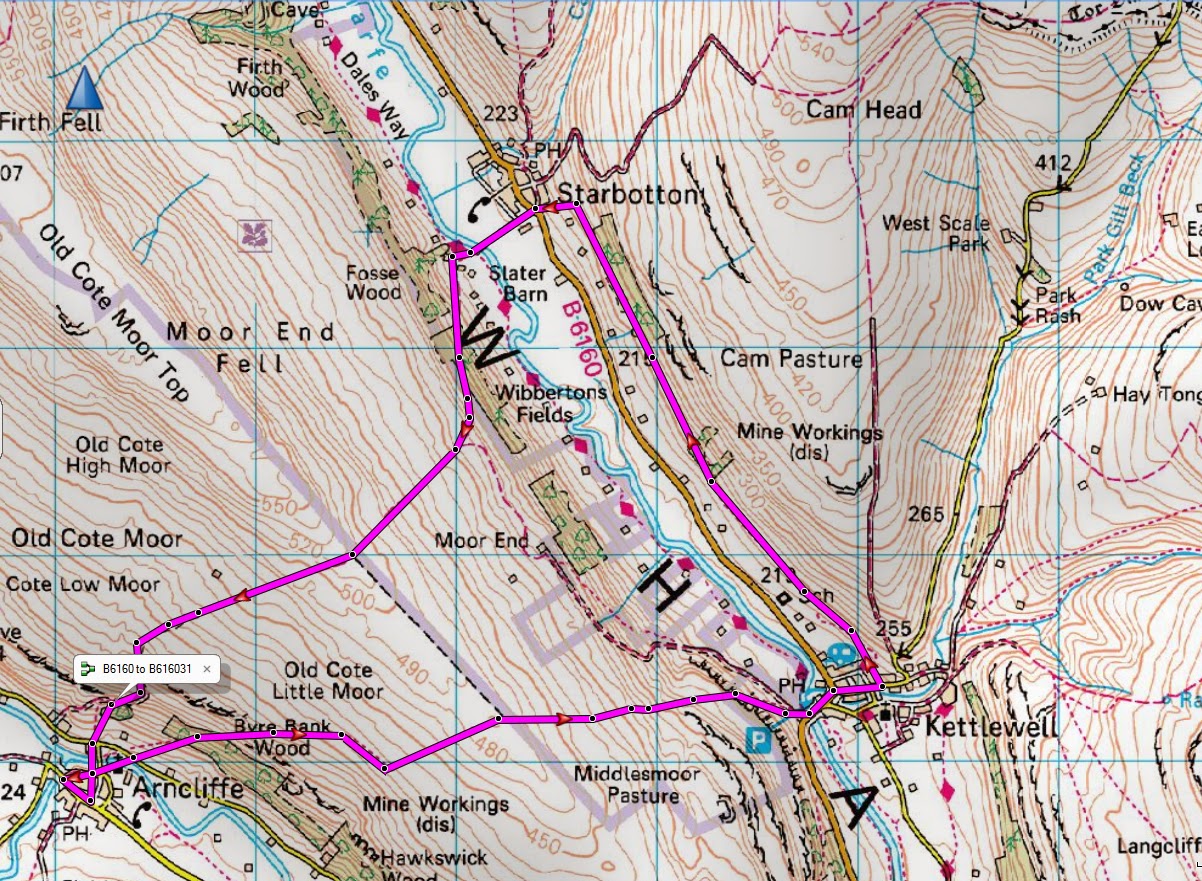