Scarborough to Filey on the Cleveland Way - March 2014

I've decided to stop taking much notice of the weather forecast.  Too often I've delayed or completely postponed a day's walking because the forecast has been poor, only to regret doing so when it hasn't turned out to be as bad as predicted after all.  And in any case, I've got enough bad weather gear to withstand  most conditions.  I did, however, take notice of the Met Office website's forecast on one particular Sunday, towards the end of March.  It had (accurately as  it turned out) predicted torrential downpours inland with broken cloud and patches of sunshine along the coast.  So, when studying my maps to plot out a route for the day, I decided it was time to explore another coastal section of the Cleveland Way.

My previous coastal excursions had mostly taken me along the Cleveland Way north of Scarborough, and also around the Flamborough Headland Way.  The section of the Cleveland Way between Scarborough and the start/finishing point at Filey, however,  was unknown territory to me and I was very keen to explore some, if not all, of this ten miles stretch of coastline.  A quick look at the OS map and  I realised that a circular route was either going to be unfeasibly long or would involve lengthy sections of walking along busy roads.   So, for a change, I mapped out a linear route and we drove out to the little seaside town of Filey in North Yorkshire.  Here we parked our car at the railway station and boarded a train for the 15 minute journey to Scarborough.

Filey is a very busy little seaside town in the summer months, but on a windy Sunday morning in March it was very much closed for business.  The wind was howling down the tracks as we shivered on the platform, the only other prospective passenger being a solitary herring gull. 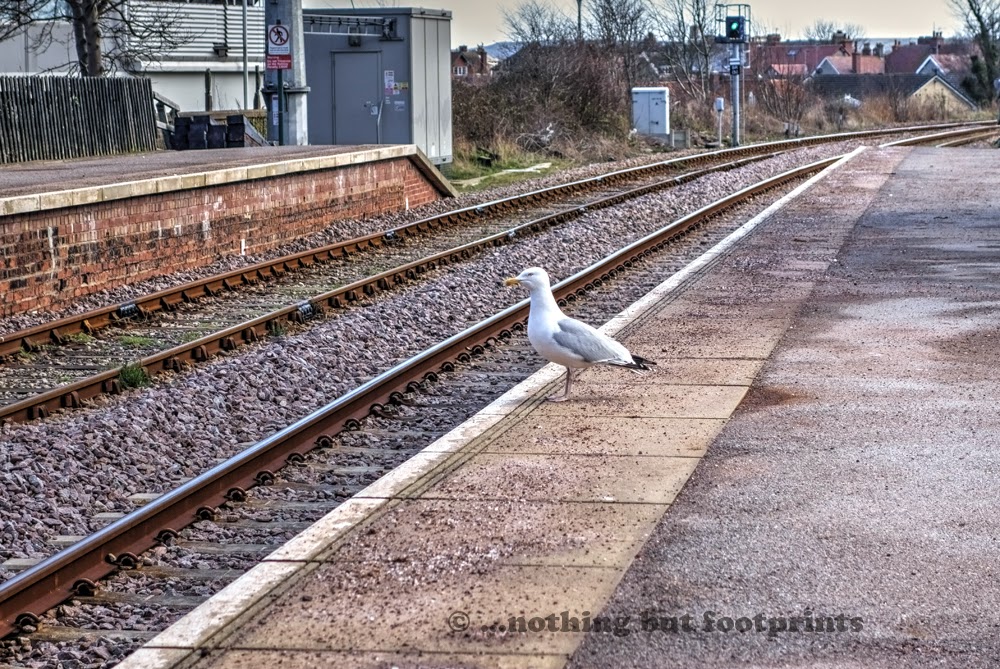 Waiting for a train at Filey

Inland the clouds were gathering ominously with definite signs of downpours in the distance.  In Scarborough though the sun was shining, the sky was blue and the streets were busy with visitors.  Scarborough is a lovely, vibrant seaside town which seems to attract people all year round.  We were in high spirits and full of energy as we set off, leaving the town centre to head down to join the seafront path by the Grand Hotel.  Here we paused a while on the Spa Bridge to take in the view of the castle and the harbour. 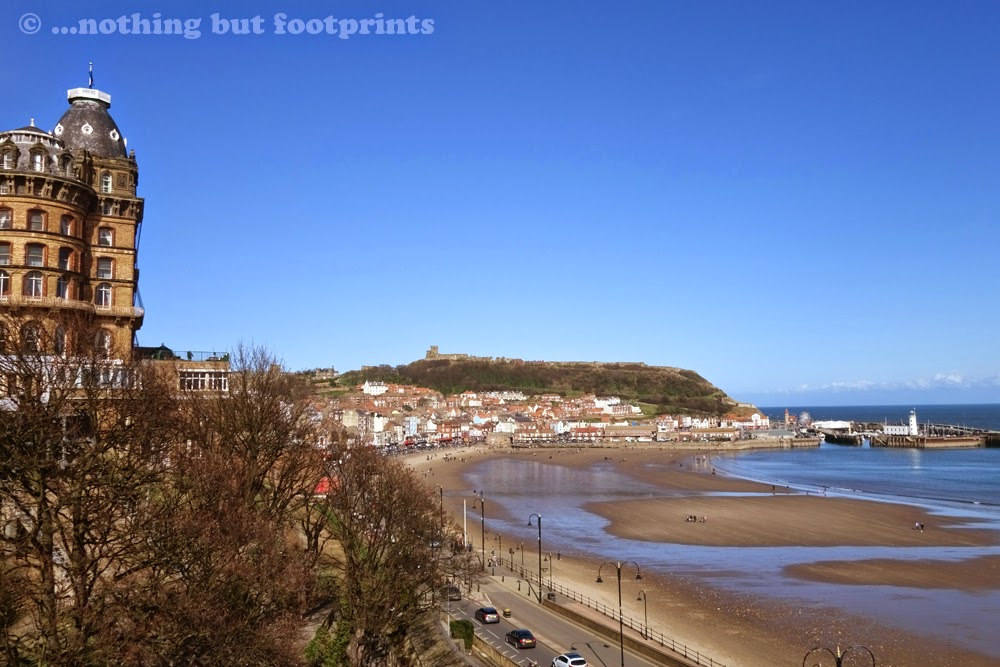 
The Grand Hotel is a huge Victorian (Grade II Listed) building which dominates the Scarborough skyline.  At the time of its opening in 1867 it was not only one of the first large scale purpose-built hotels in Europe, but also one of the largest hotels in the world.  And it incorporates some rather striking and significant design features.  There are 12 floors, representing the months of the year, four towers to represent the seasons, 52 chimneys representing the weeks of the year and originally there were 365 rooms, one for every day of the year (excluding a Leap Year).   And as if that wasn't enough symbolism for one building,  it was also constructed in the shape of the letter 'V' in honour of Queen Victoria!   The hotel's heyday was very much in the Victorian era when it was a popular choice for wealthy holidaymakers.  It was here in 1849 that the novelist Anne Brontë died (she is buried not too far away in the churchyard of St Mary's, beneath the castle walls). 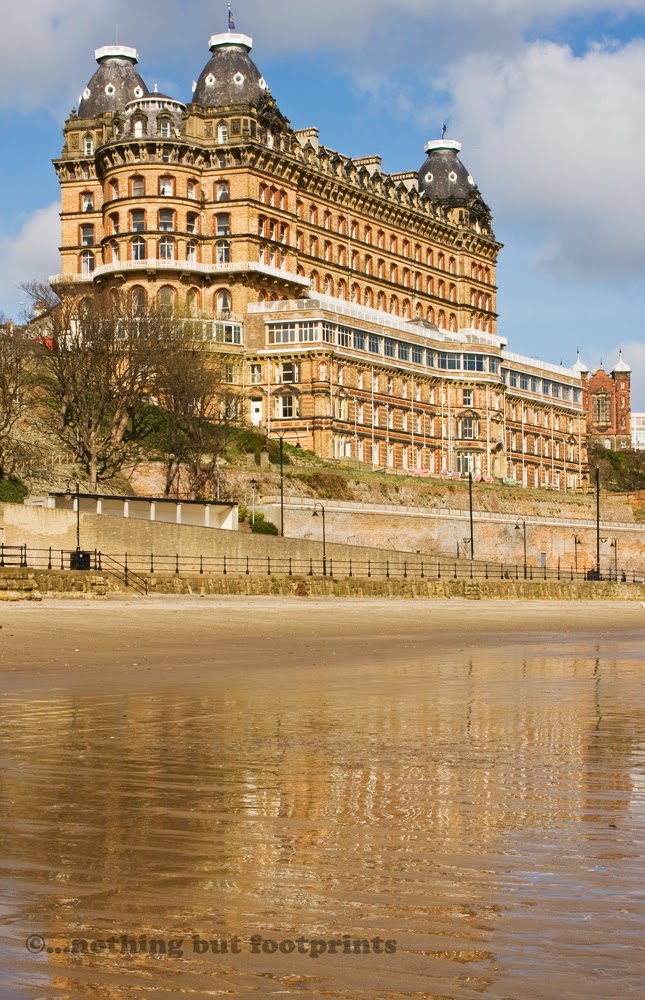 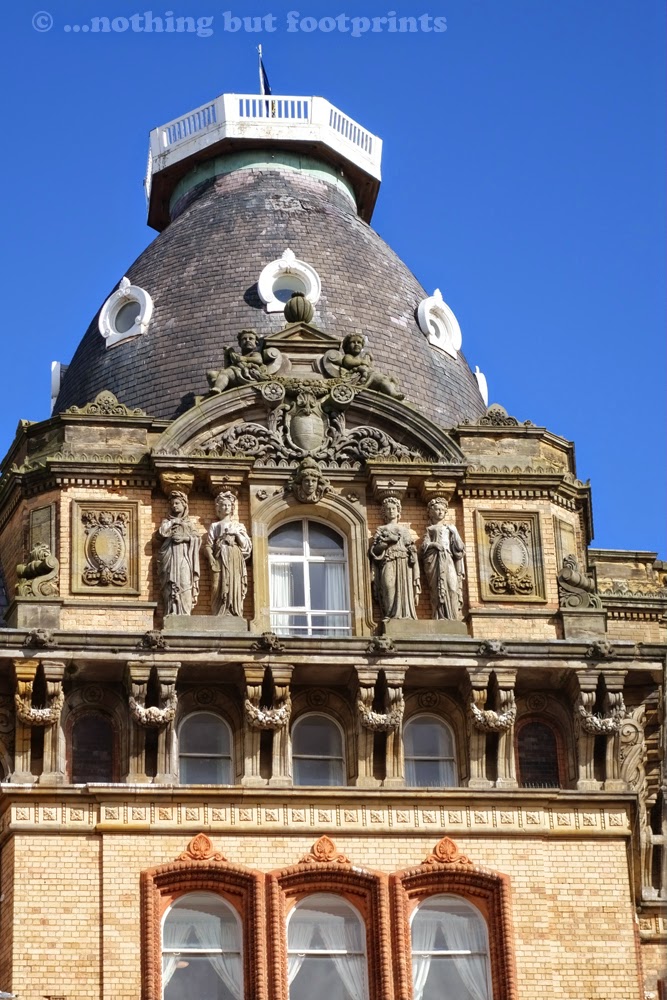 One of The Grand's four 'seasonal' towers


The Cleveland Way doesn't have a fixed route through the town of Scarborough, leaving walkers to determine their own course depending on accommodation and sightseeing choices.   After crossing the Spa Bridge though, the trail takes up again as it heads along the coast. 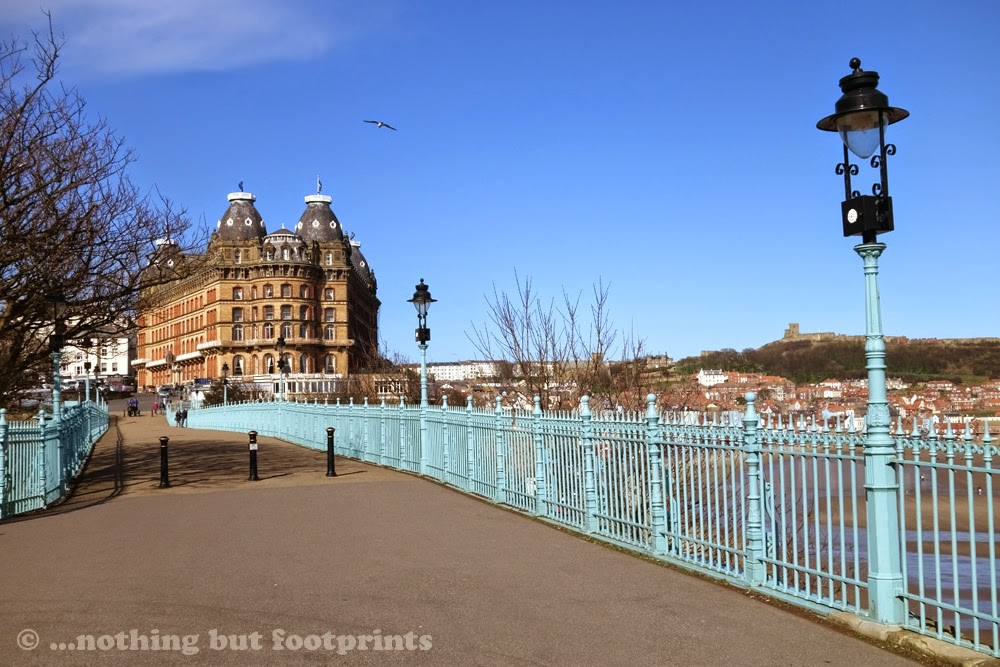 After walking along the foreshore for a short distance we passed the Spa, an entertainment complex and site of the mineral water spring which was discovered in 1626 and was responsible for the beginning of the town's tourism industry.  The Spa Complex today is a venue for conferences, exhibitions and entertainment events, owned and managed by the local council.  One of its most striking features is the beautiful Ocean Ballroom which was first opened in 1925, enlarged in the 1960s and refurbished in 1986. 
From the Spa Complex we continued, following the seafront promenade, leaving the town behind and with a clear view of our route ahead of us. 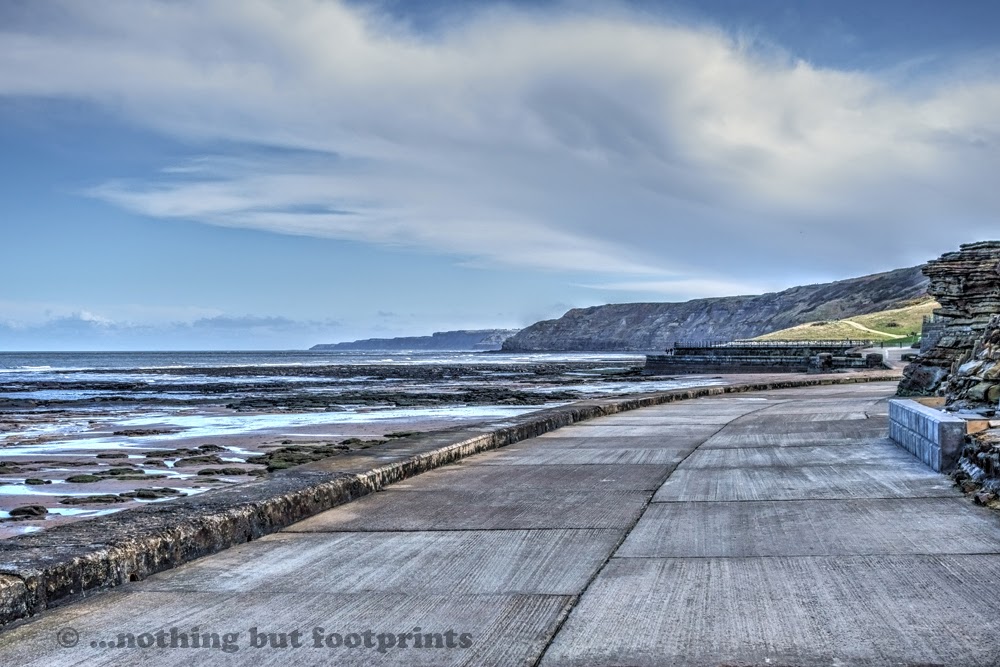 
The foreshore ended abruptly with a rather steep climb away from the beach.  Although it wasn't really needed, at the top of the cliff we found clear proof that we were most definitely now on the Cleveland Way. 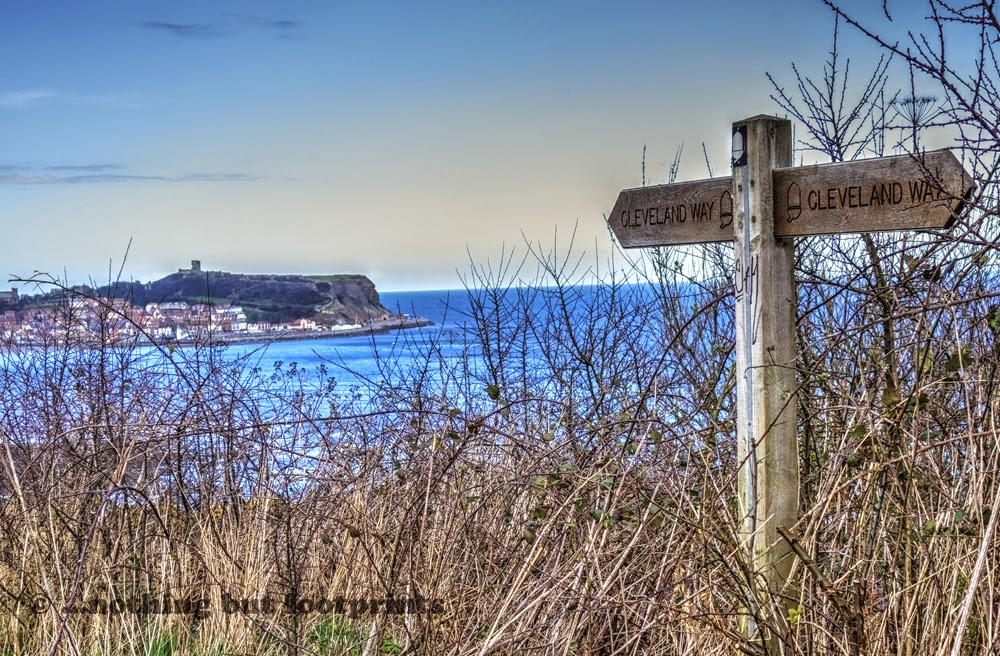 Back on the Cleveland Way


And once at the top we were treated to another splendid view of the whole of Scarborough's beautiful North Bay. 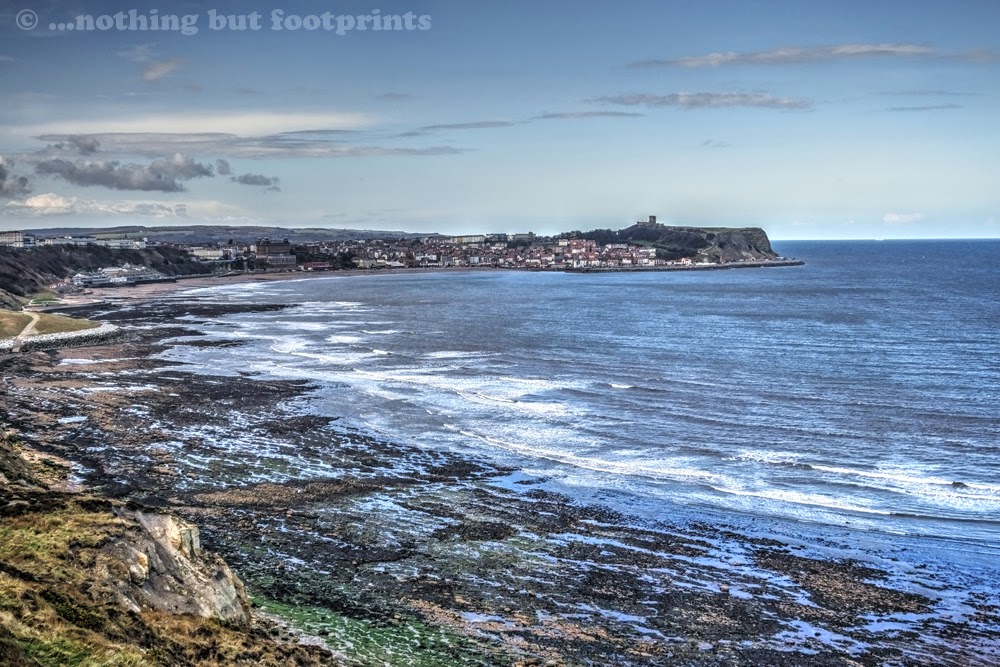 The next section of our walk took us along a stretch of coastline which is possibly best known for some significant landslides.  It was here in June 1993 that a large chunk of coastline tumbled down to the sea, taking with it the Holbeck Hall Hotel.  I remember this well as I was visiting Scarborough at the time and just happened to be looking across the bay when a large cloud of dust rose upwards as the last remains of the hotel slipped down the cliff.  It was quite a sight!  More recently in January 2013 three homes had to be demolished at nearby Knipe Point following a further significant landslip.  As we approached the area we could see clear evidence of the unstable nature of this stretch of coast, the homes ahead of us almost teetering on the brink. 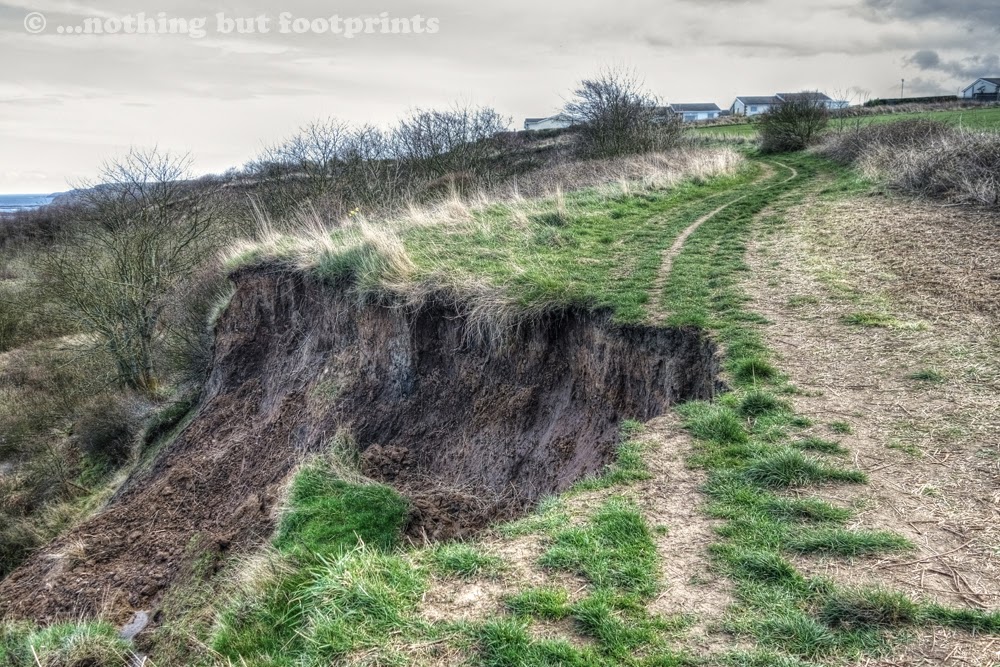 Here the Cleveland Way itself has been lost to the sea and is therefore diverted inland, briefly following the main A165 Scarborough to Filey road before turning back to the coast at Osgodby Hill.  As we left the main road and turned into woodland in the ownership of the National Trust, I got my first glimpse through the trees of the very pretty Cayton Bay. The sun was shining again as we headed down to Cayton Bay, which is home to the Scarborough Surf School and, according to their website, some of the best beach break waves on the east coast.  We could see a few surfers hoping to catch a wave although the sea looked a bit flat. 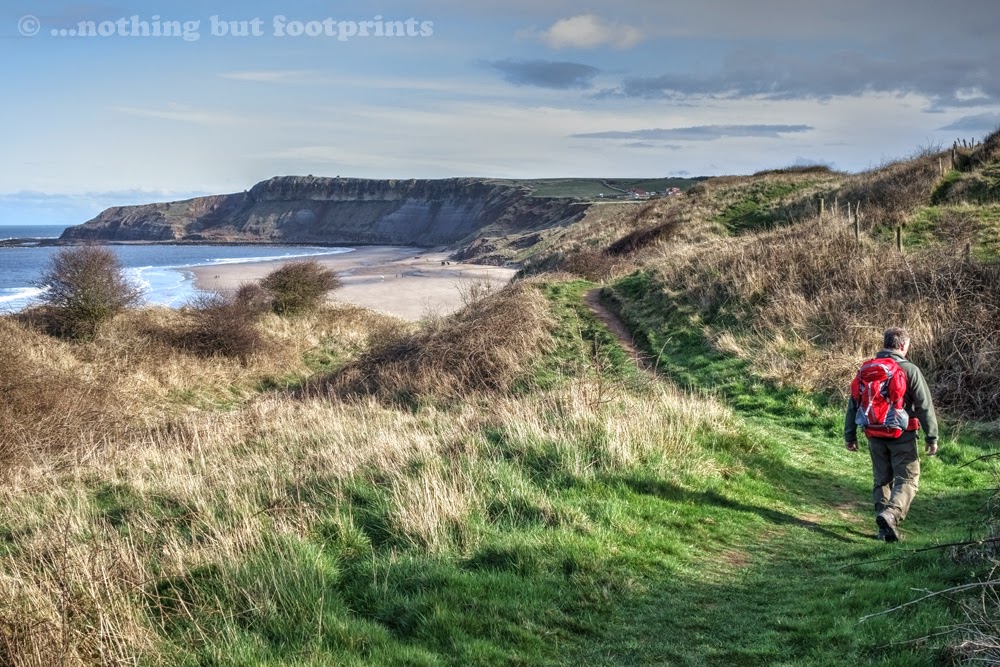 
From the path above Cayton Bay we had a clear view of Knipe Point . 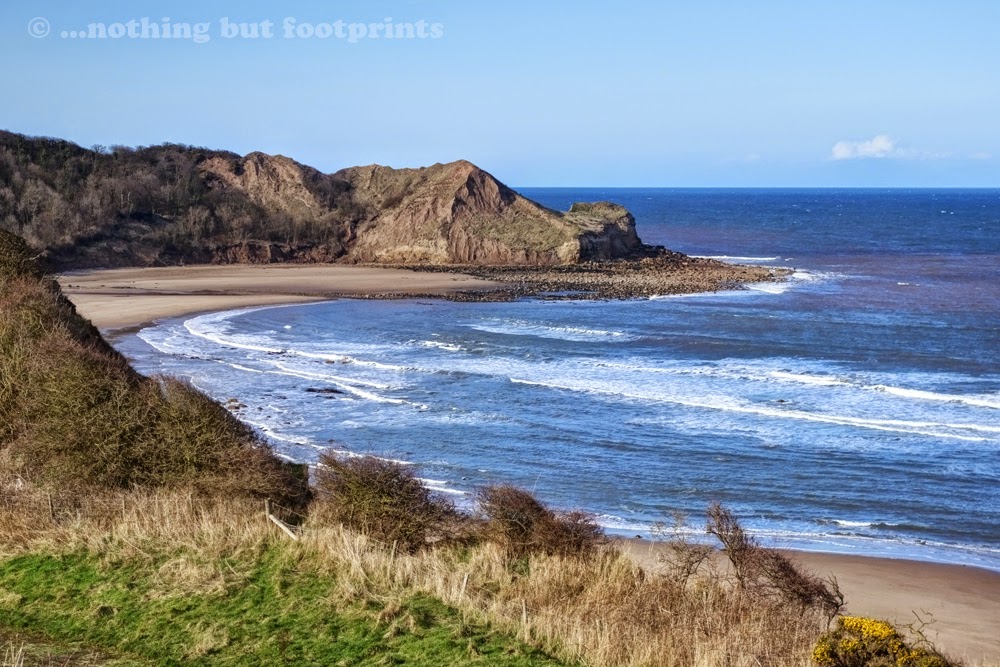 
To the north of Cayton Bay Lebberston Cliffs rise 260 feet above sea level,  and although they were mostly in shade, we could see interesting shapes and striations in the cliff face. 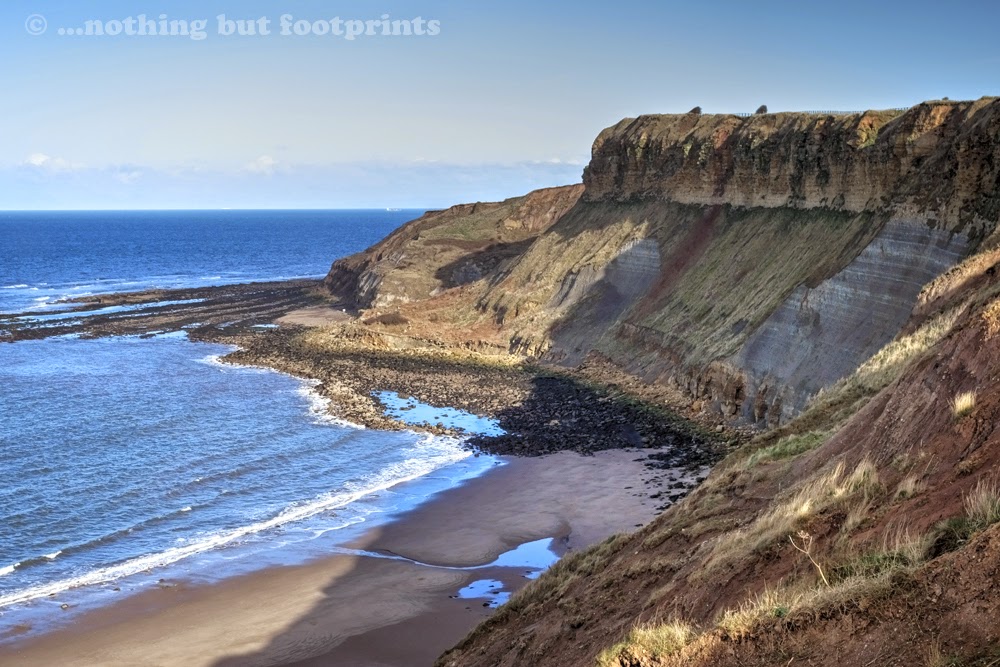 
Once at the top it was worth having a breather and taking in the view of Cayton Bay, Scarborough and beyond to where the Cleveland Way leads to Ravenscar (a section we walked last autumn). 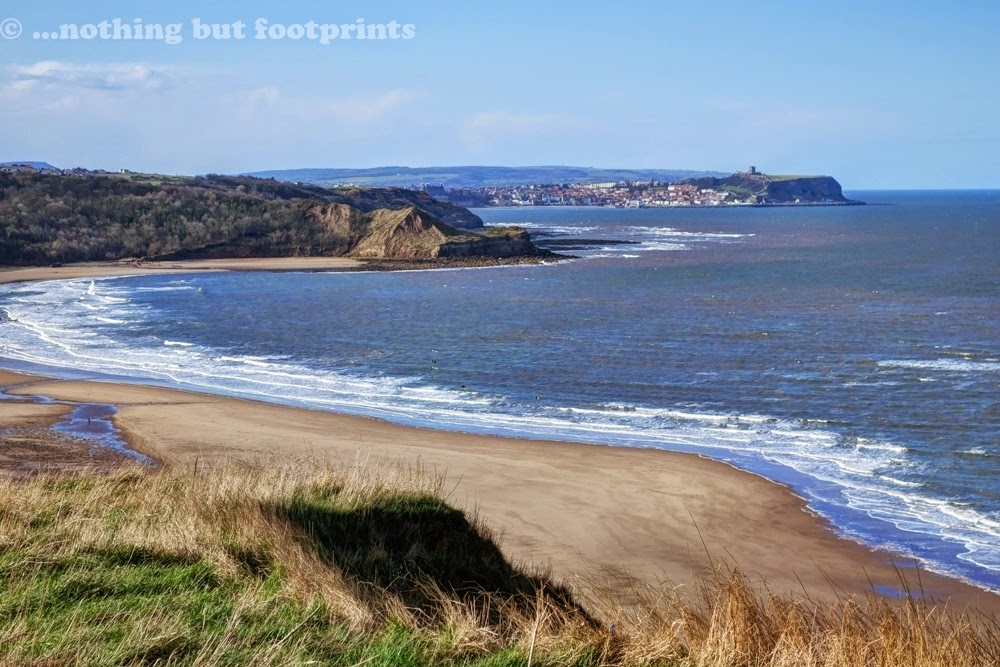 
Further along we came to Gristhorpe Cliffs where caravans seemed to be perched precariously close to the edge.  Below the extensive reef known as Castle Rocks was clearly visible.  This reef and the nearby Horse Rock have been responsible for many a shipwreck over the years. 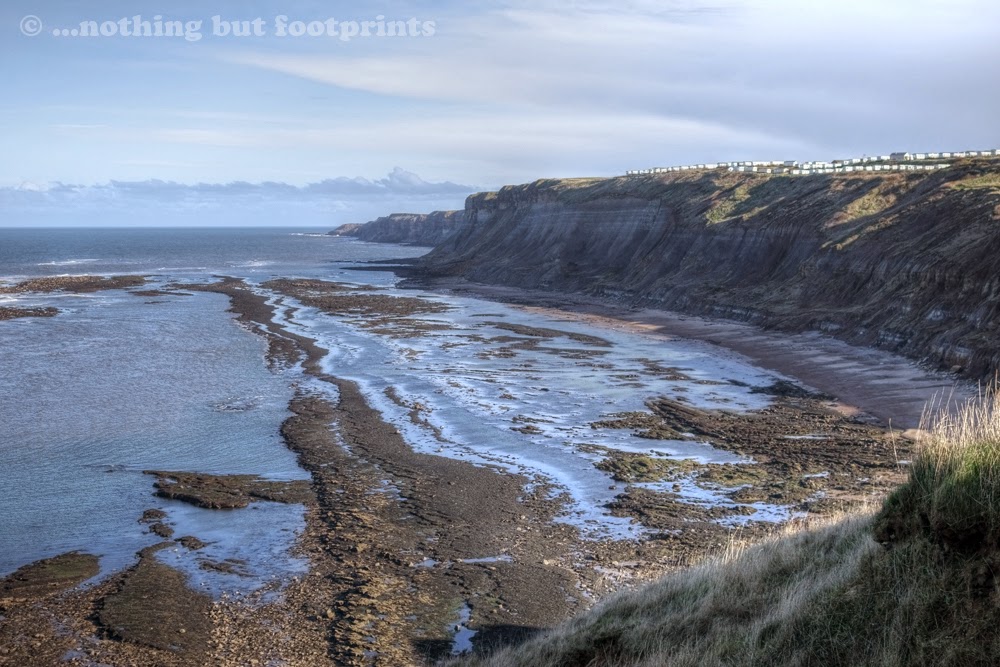 Castle Rocks - site of many shipwrecks


As we approached Filey Brigg and the end of our walk a curious flagpole type structure caught my attention.  This is the Filey Rocket Pole, which was one of several similar poles situated along the Yorkshire coast, used to fire rockets with lines to aid rescues from stricken ships.  The pole was fenced off from public access, but a nearby sign explained that  it had been in use from 1872 until the 1960s and had been restored in 2001 by the Filey Brigg Ornithological Group. 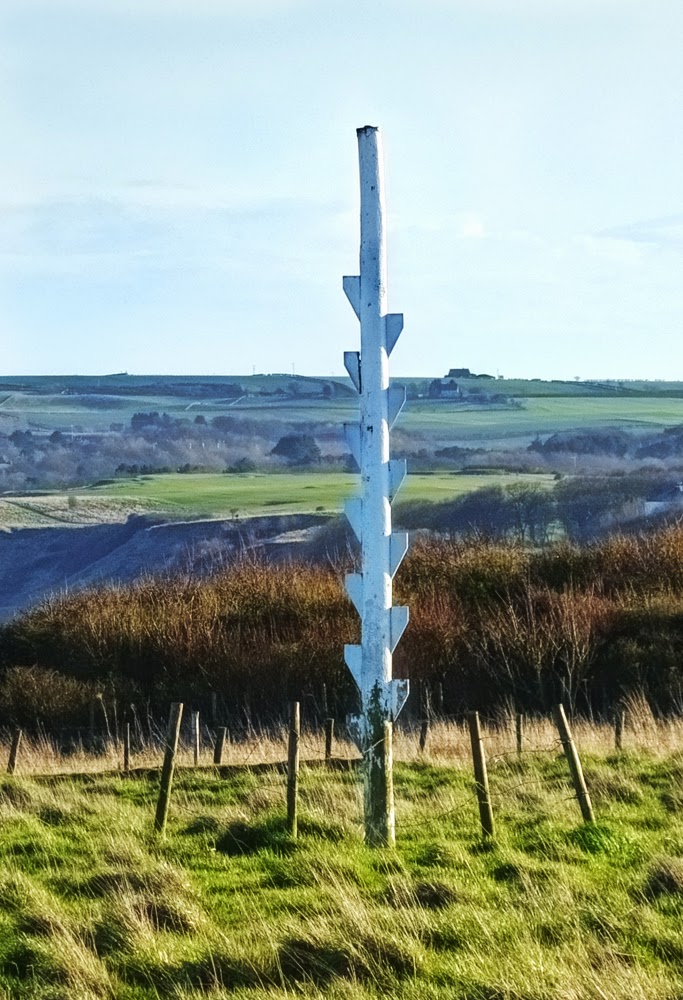 It was only a short distance from the Rocket Pole to what was the first part of the end of our walk.  That is to say, the end of the Cleveland Way (or, for some, the beginning), leaving us just one last mile to walk back to our car at Filey Railway Station.  The end (or start) of the Cleveland Way is marked with a rock sculpture, carved with the National Trail's acorn symbol and engraved with the names of several of the towns and villages through which the route passes.  This sculpture is actually double-sided in that the other side also marks the end (or beginning) of the Yorkshire Wolds Way which starts (or ends) 79 miles away by the Humber Bridge. 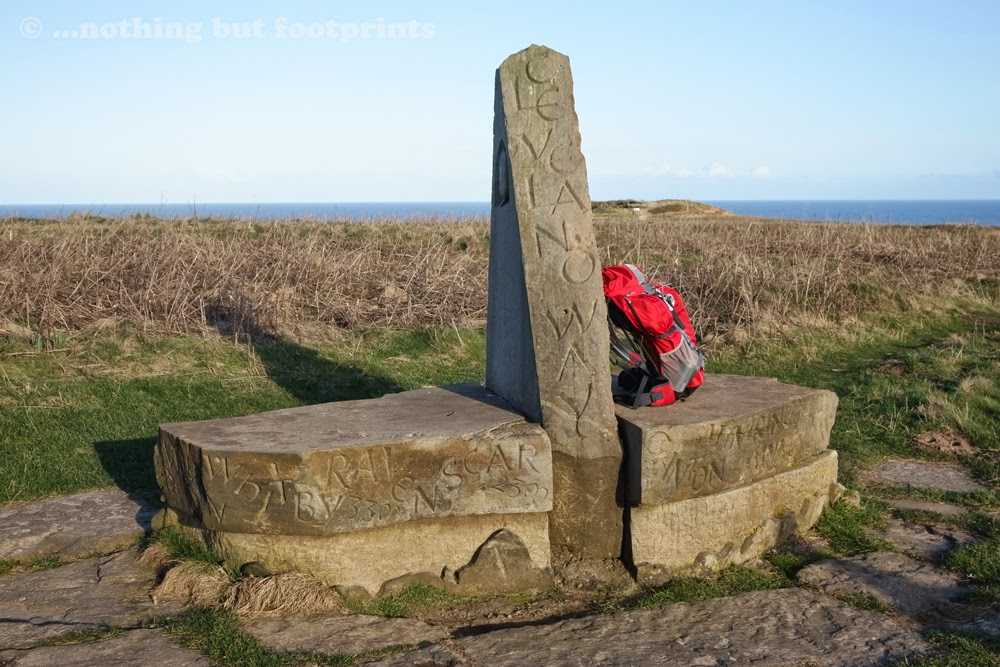 The end (and start) of the Cleveland Way


Leaving this place of beginnings and endings behind us we were treated to a fine view of Filey Brigg, basking in the late afternoon sunshine.  The Brigg is a long, narrow peninsula made up of sandstone and limestone and was once the site of a Roman signal station.  Today it is popular with holidaymakers and nature lovers alike, being home to several species of bird such as oystercatchers, redshanks and sandpipers. 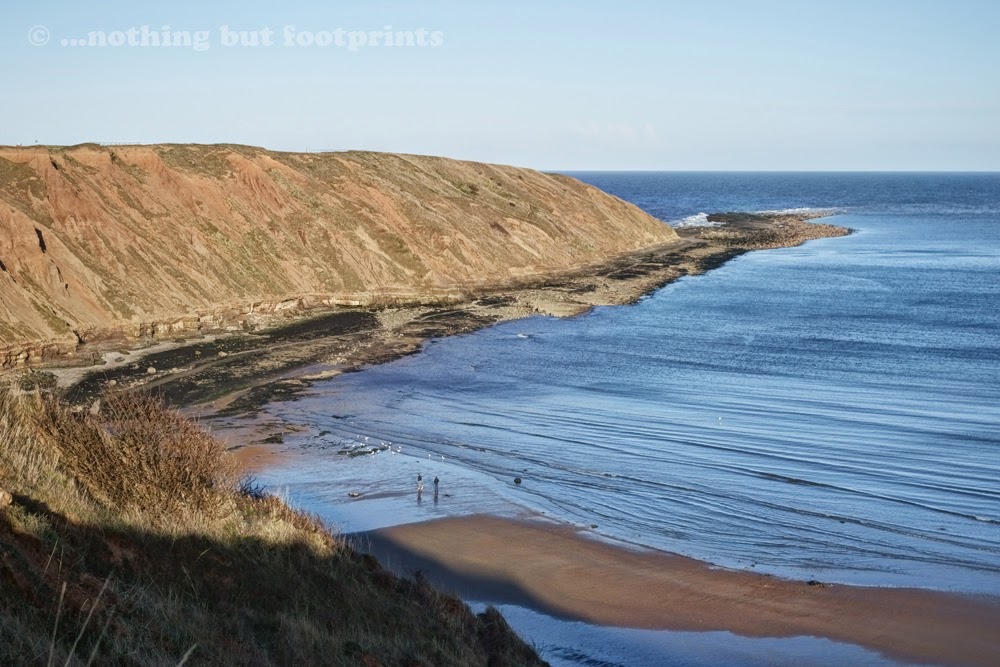 
Before turning inland to be reunited with our car I paused to look at a wooden direction sign and I tried to imagine how I'll be feeling the next time I visit this place, which will hopefully be later in the year upon our completion of the Yorkshire Wolds Way.  I'm sure that no matter how tired I'm feeling at that point I will have happy memories of this particular walk which was one filled with interest and beauty for the entirety of its ten miles.  But now it was time to find somewhere for refreshment.  Sadly though, Filey was still closed. 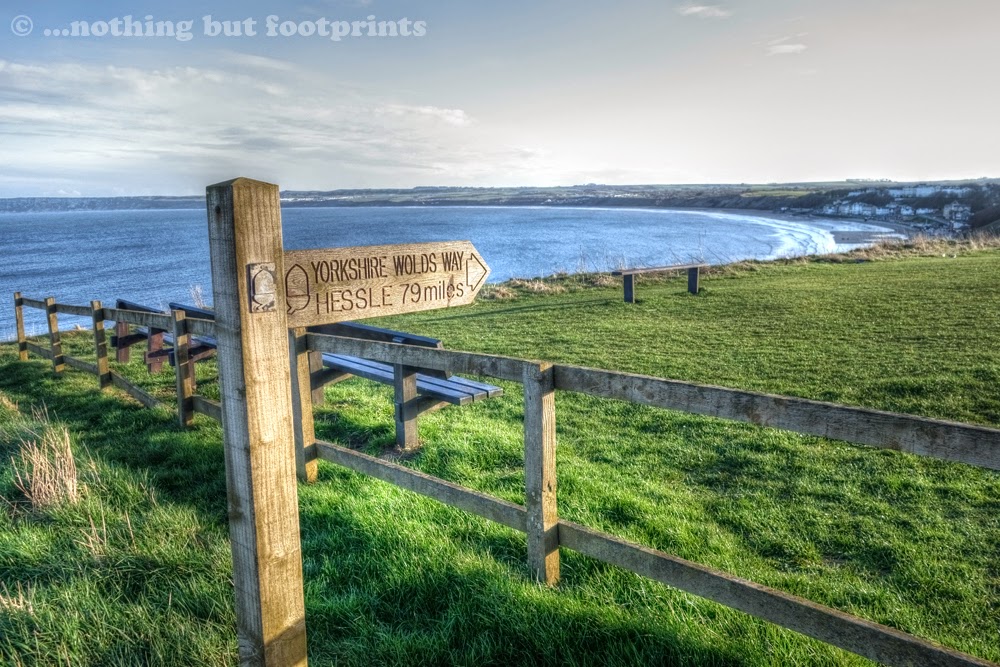 Trains run regularly (especially in the summer season) between Filey and Scarborough and there's plenty of parking (free at Filey station).  Whichever way you may choose to walk this route, it really is very straightforward and is purely a matter of heading for the sea in the first instance.  From there the route is very obvious and very well signposted. 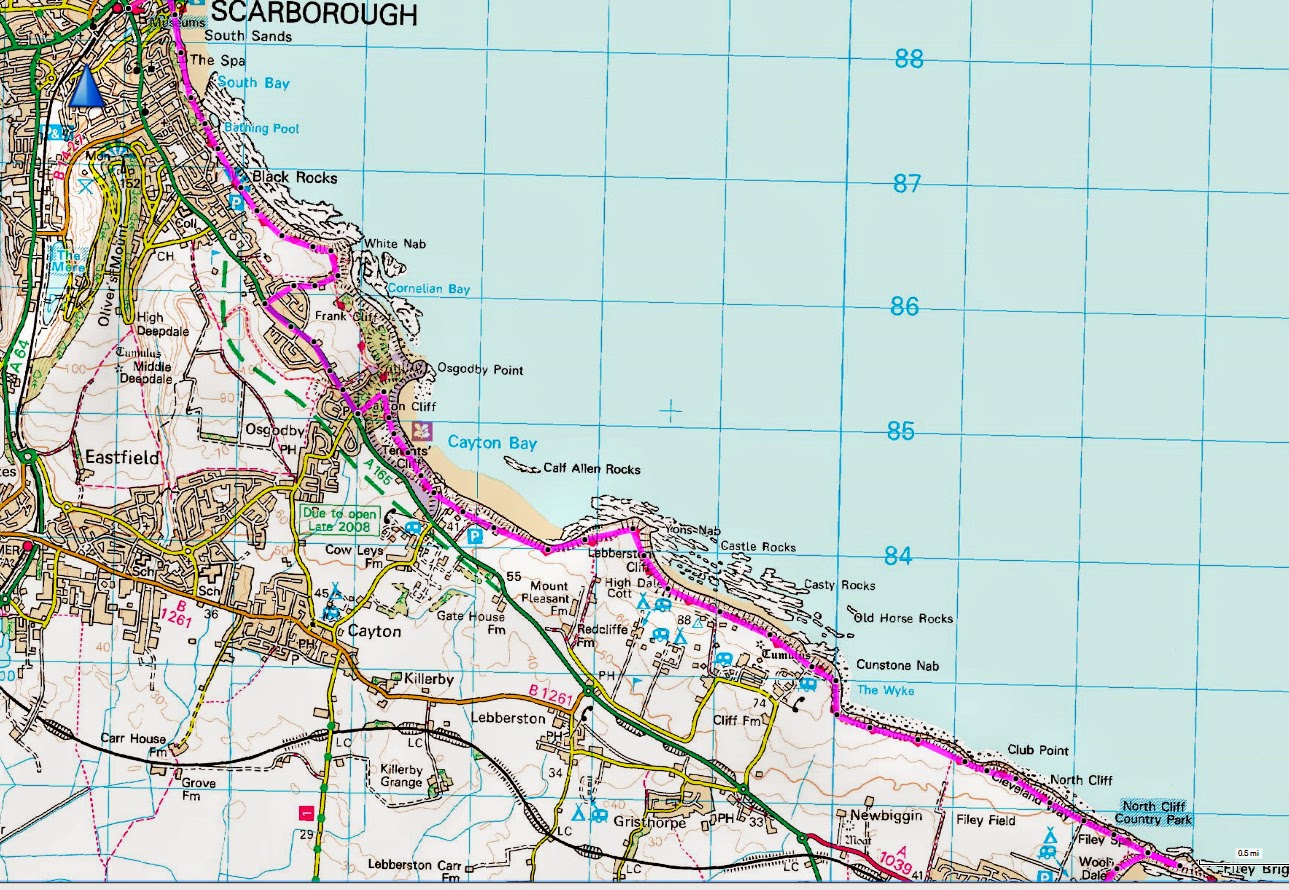 Coming soon.....
My next blog will follow a glorious spring walk through the North York Moors valleys of Farndale and Rosedale.  If you'd like to be kept up to date, be sure to follow me on Facebook.
﻿
﻿
at 12:22