Sunday morning of our short break in Bilsdale dawned somewhat overcast.  Weather like this is always a mixed blessing for me.  On the one hand, a dry but overcast day can make for pleasant walking, particularly if a route entails a number of ascents.  But then dull days with poor light are not ideal for photography.   Having suffered a little from sunburn the previous day though, I wasn't too disappointed to be walking in much cooler conditions.

After a most enjoyable breakfast (the kind that sets you up for the entire day), we checked out of the Buck Inn and established that it was no problem to leave our car in their car park for the day.  The first part of our walk retraced Saturday's route, heading up onto Cold Moor and along to join the Cleveland Way above Broughton Bank. 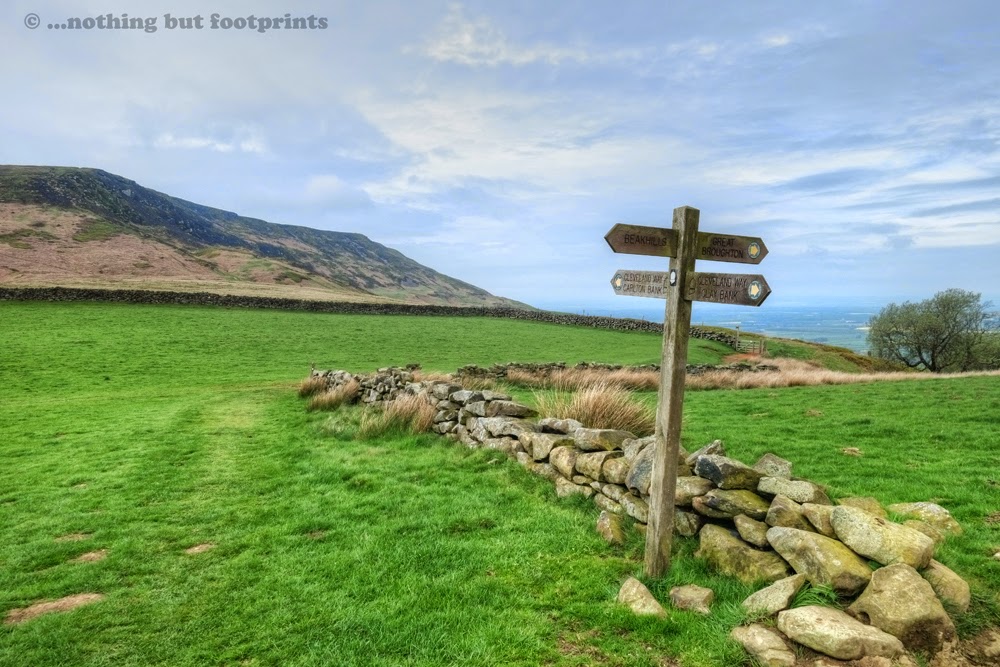 Back on the Cleveland Way
Looking across in the direction of the Wainstones, I was surprised at how much closer Roseberry Topping appeared in this kind of lighting.  In bright sunshine it had looked so much further away, but now that the background wasn't visible to give it perspective, its distinctive shape really stood out. 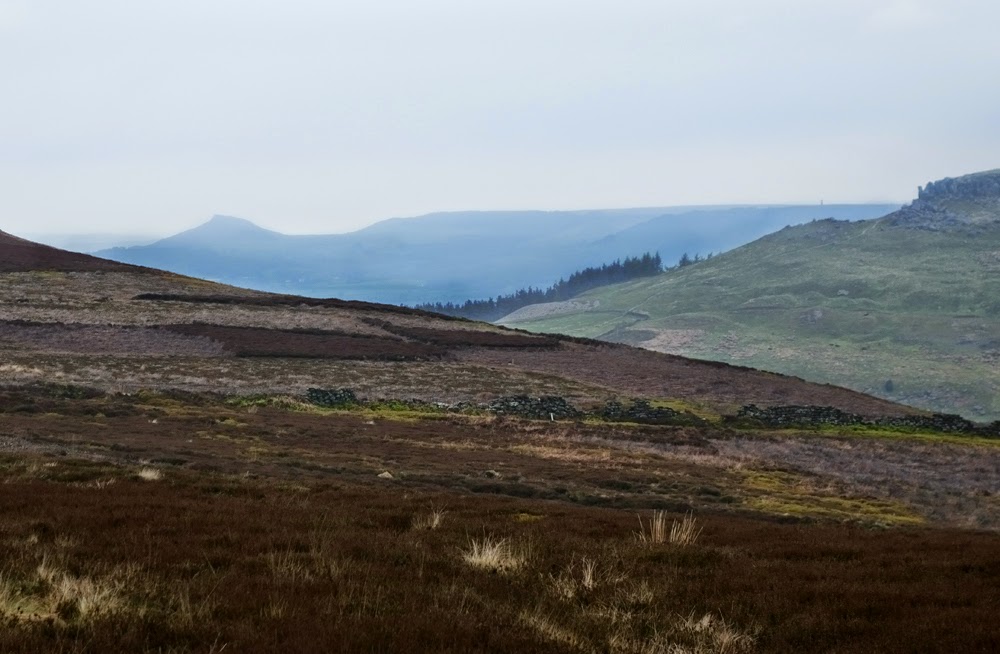 Today's walk was to take us in the opposite direction to our previous walk.  Once we had reached the Cleveland Way, we turned left and descended to meet the path midway between Carlton Bank and Clay Bank, before climbing up again onto Cringle Moor.  The view was hazy and nothing like as clear as it had been the day before, but it was still pretty spectacular and a real joy to be tramping along the ridge of the Cleveland Hills.  Ahead we could see a promontory where a small group of people were gathered around a stone feature. 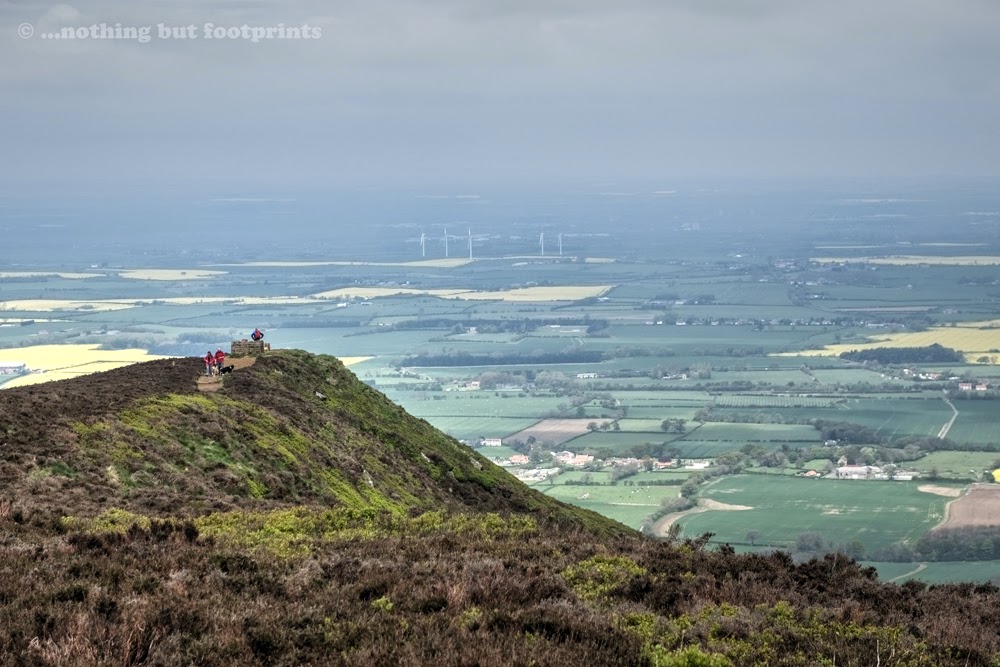 The edge of Cringle Moor

By the time we reached this point the other people had left and we had the spot to ourselves.  Here we found a stone bench along with a bronze plate inscribed in memory of Alec Falconer 'Rambler' who had died in 1968.  A handy view finder showed us what we should have been able to see, had the weather been a little clearer.  I was a little disappointed at not being able to catch a glimpse of lovely Ingleborough and Whernside but other, nearer features in the landscape were clearly visible.  The 'Rambler' concerned, Alec Falconer, was a founder member of the Middlesbrough Rambling Club  and he had actively campaigned for the opening of the Cleveland Way.  Sadly, he passed away just one year before the National Trail was officially opened and this memorial was erected in his memory by his friends and fellow Rambling Club members. 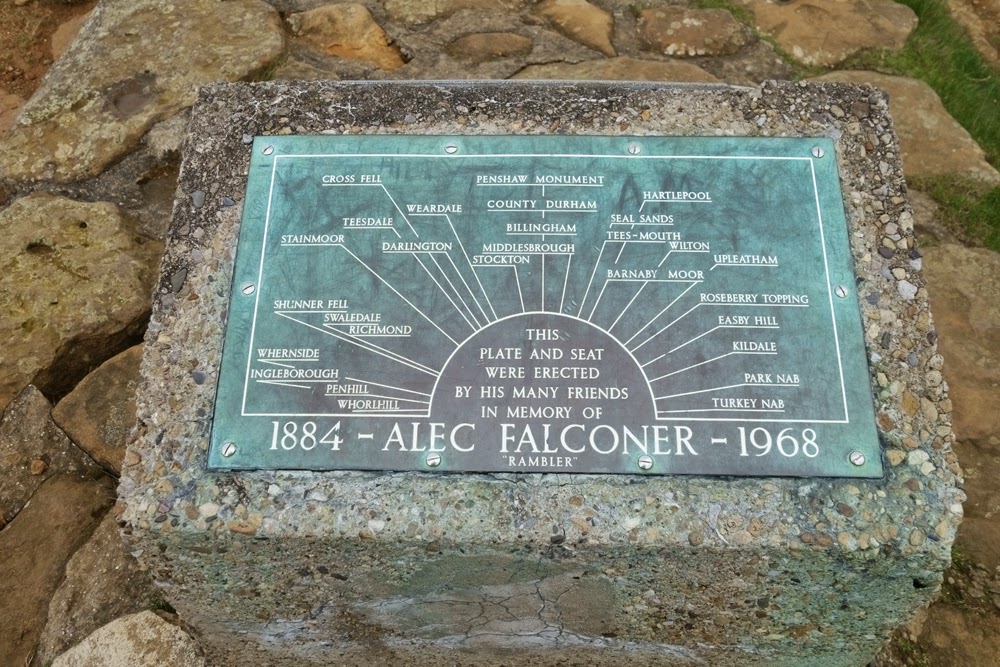 
On the side of the plaque's stone plinth I discovered another plate, this one put there by the Holiday Fellowship, a co-operative society founded in 1913 with the objective of "organising holidaymaking, to promote the healthy enjoyment of leisure, to encourage the love of the outdoors and to promote social and international friendship".    I really liked this poem, as it kind of fits in with my whole "nothing but footprints" ethos.

Here it is, transcribed in full:

A request from the Holiday Fellowship
Friend, when you stray, or sit and take your ease
On moor, or fell, or under spreading trees
Pray, leave no traces of your wayside meal
No paper bag, no scattered orange peel
Nor daily journal littered on the grass
Others may view these with distaste and pass
Let no one say, and say it to your shame
That all was beauty here until you came 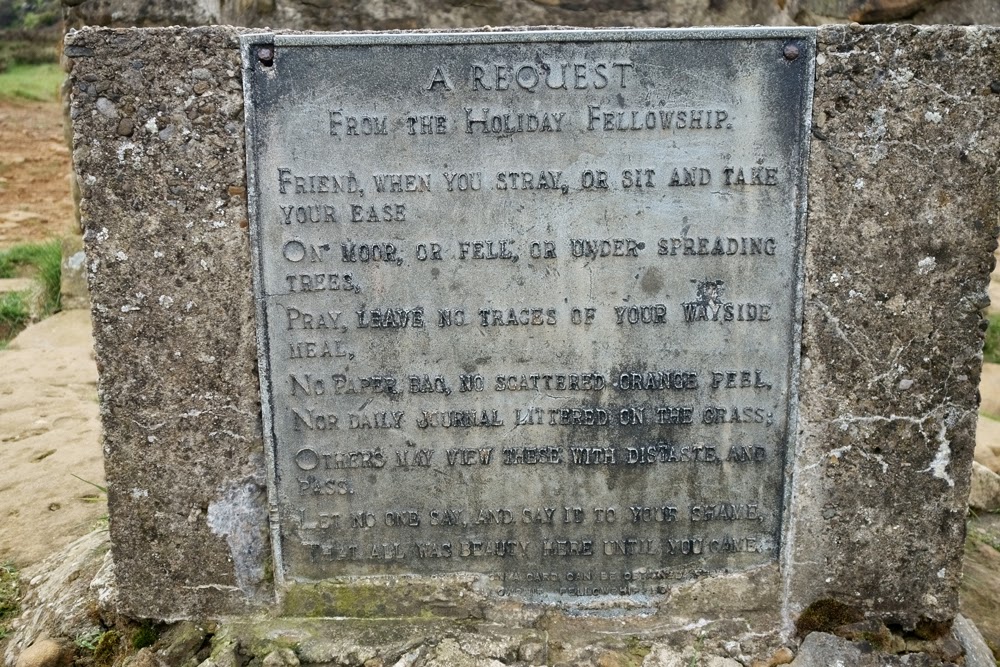 A nice poem by the Holiday Fellowship

We did sit and take our ease here for a short while, but no wayside meal was consumed.  That pleasure was to be reserved for the next point of interest on this walk.  As we headed downhill from Cringle Moor we could see a group of cars and caravans ahead of us, but no sign of our destination, which was obscured by trees. 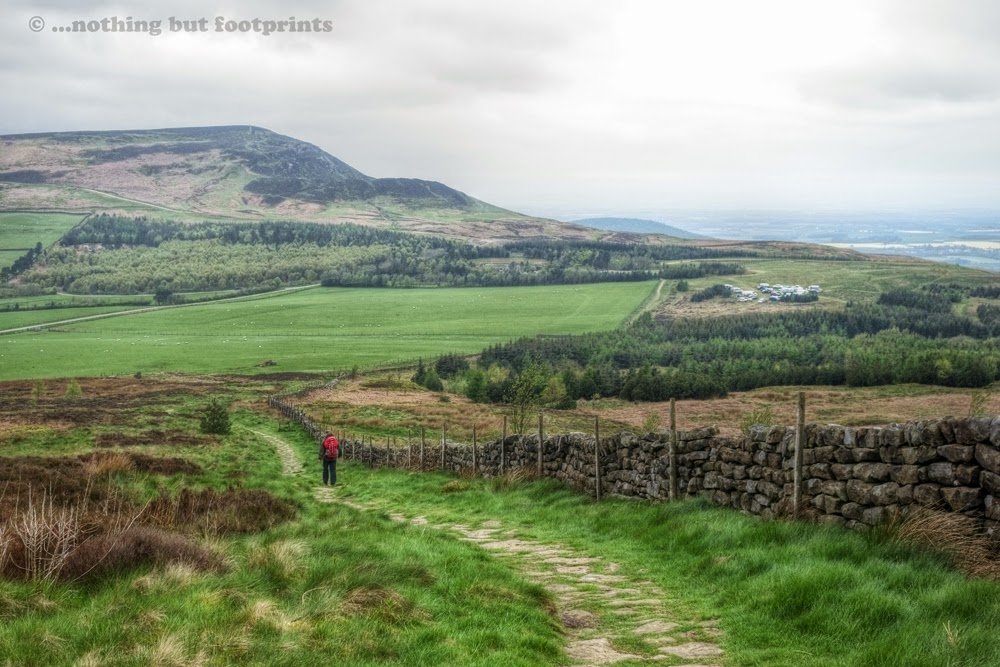 Down from Cringle Moor

I had read about the Lordstones Cafe on a walking website some time ago.  When I had thought about putting together a walk in the area last year, I discovered that the cafe had closed.  A recent check, however,  had established that it had been refurbished and was open again and I was very keen to check it out.  We weren't disappointed.  The cafe was very nice indeed.  Too nice, in fact, to walk into with our muddy boots, but luckily the weather was fine and there were plenty of tables and chairs outside, where a waiter took our order for hot drinks and sandwiches before we went in search of the actual "Lord Stones". 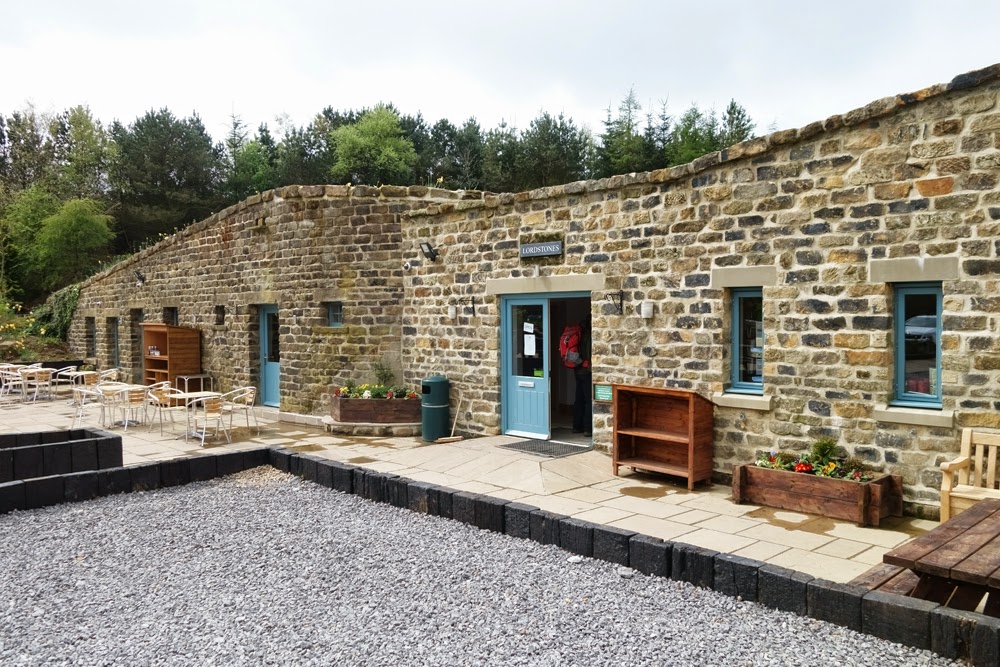 The Lordstones is a country park, owned by the Urra Estate, and it takes its name from a nearby group of standing stones.  The stones were, and still are, a bit of a mystery to me.  Arranged in a circle, they have the appearance of an ancient monument, but so far I've been unable to find anything to indicate that they are indeed of ancient origin.  The only references to them that I've been able to trace refer to three boundary markers and a nearby Bronze Age burial mound.  As I approached the stones themselves, they somehow looked and felt too artificial. 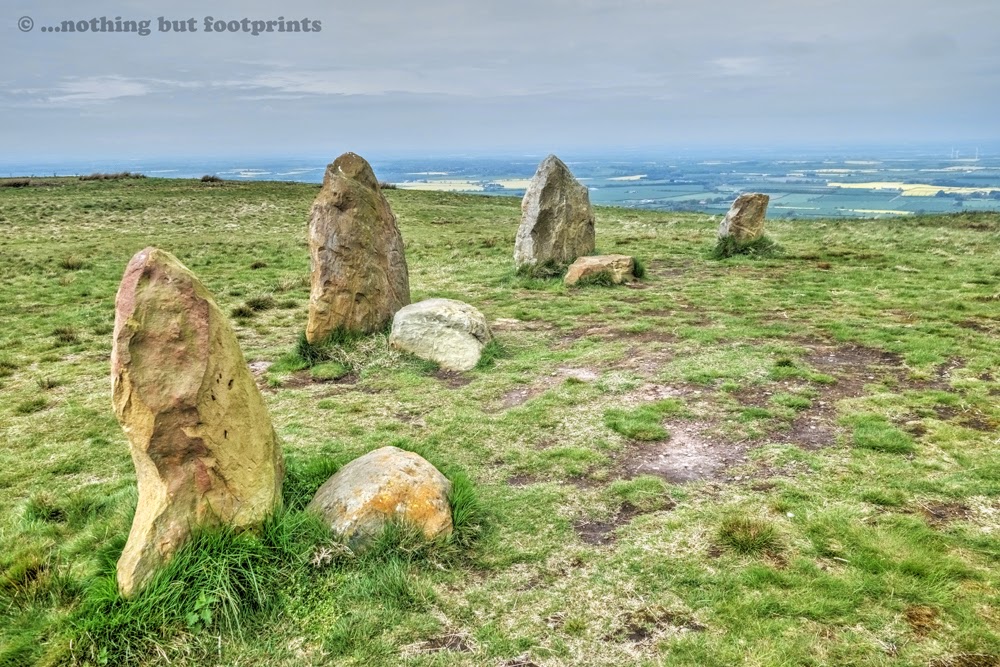 One of the stones is carved with what looks like an ancient, mystical spiral maze.  Again though, this appeared rather contrived to me and I left with the overriding impression that although the area itself may be a site of great antiquity, the stone circle is a more recent  arrangement. 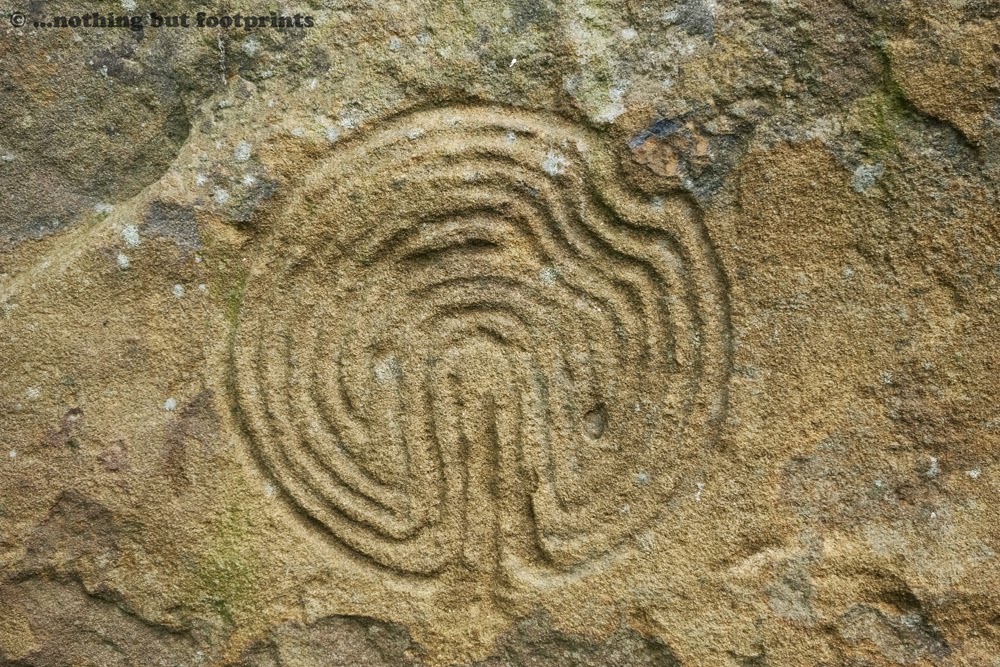 We left the Lordstones Country Park in the direction of Bilsdale West Moor, climbing up onto open moorland again.  Looking back we were rewarded with another fine view across Cringle Moor, the country park and beyond to a still hazy Roseberry Topping. 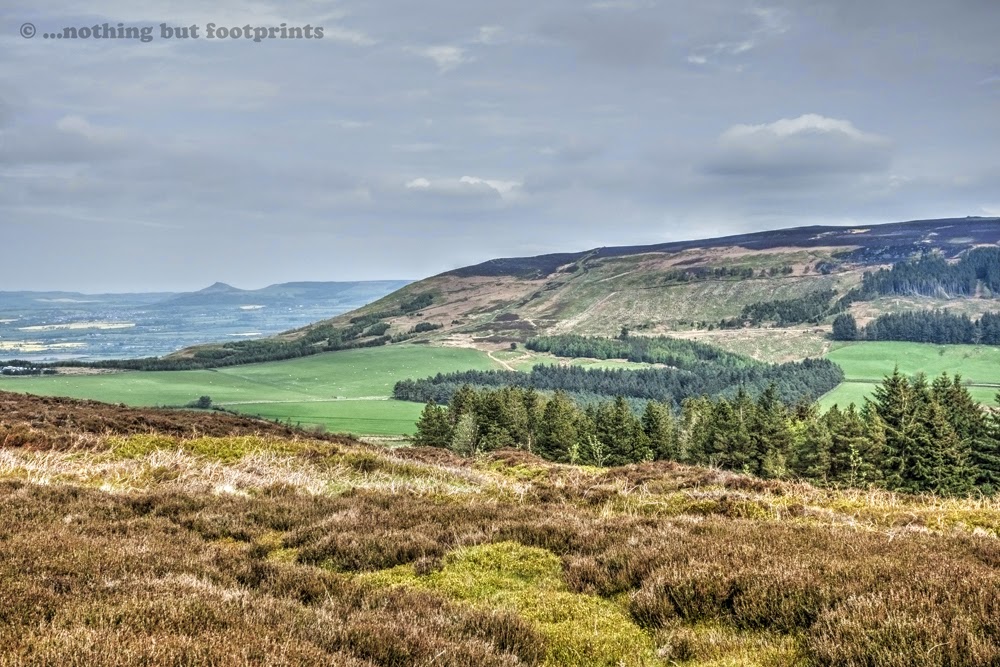 Looking back from Bilsdale West Moor

The route was now typical of moorland paths, a sandy track stretching off into the distance, with the Bilsdale Transmitter providing a familiar landmark. 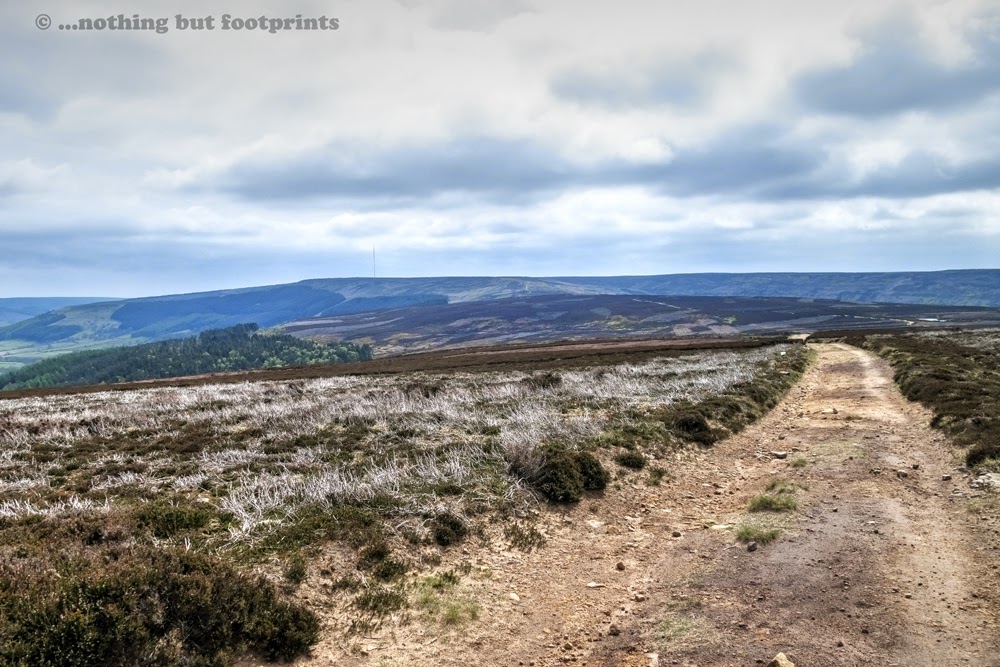 The day remained overcast but the temperature was very pleasant as we tramped along this beautiful open stretch of moorland.  As we passed another small group of walkers, I found it hard to believe that this was actually a Bank Holiday Sunday.  Had we been in the Lakes or the Dales it would have been a completely different scenario.  I much prefer the solitude!  A couple of miles of steady walking brought us to an area known as Barker's Crags, an outcrop of sandstone that extends along the rim of a peaceful valley.  I paused for a while to soak up the beauty of this place and resolved to plot more walks in this lovely corner of the North York Moors. 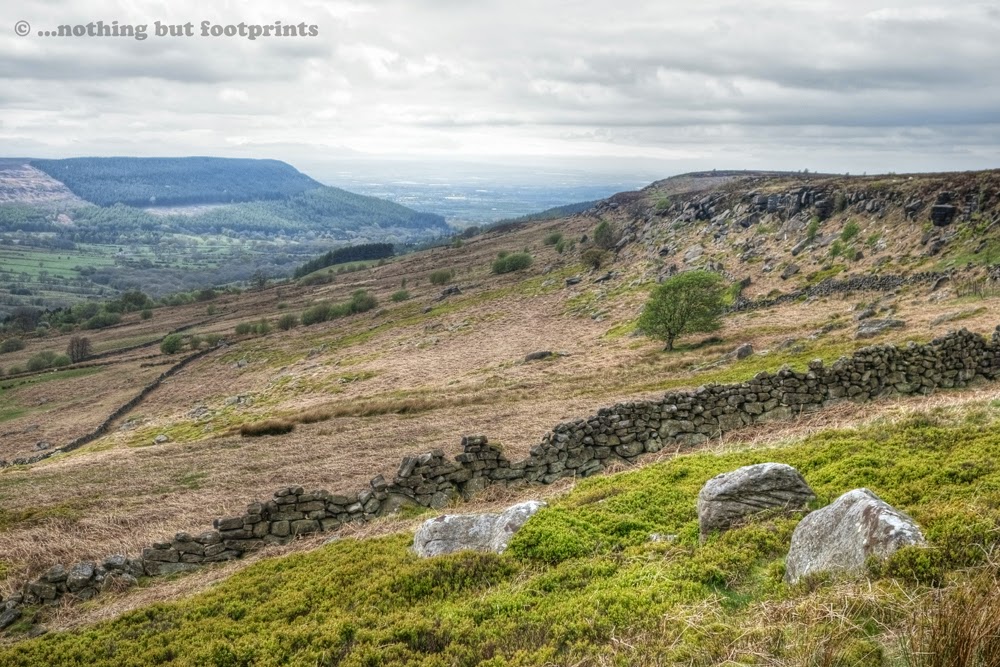 From Barker's Crags we headed downhill, emerging onto a quiet country road with fields filled with sheep and newborn lambs.   Passing by a gate, I was surprised by a little lamb bleating as if to call me over.   I obliged and was taken aback when it allowed me to stroke its head.  Before I knew what was happening, the lamb was trying to suckle on my finger, a cause of much hilarity.  That is until it realised that no milk was forthcoming and sunk its sharp little teeth into my finger.  I had no idea that lambs could actually bite!   Of course they can, but it's not something I usually associate with such cuteness.  I have to admit, I had never anticipated directing such bad language at an adorable little lamb! 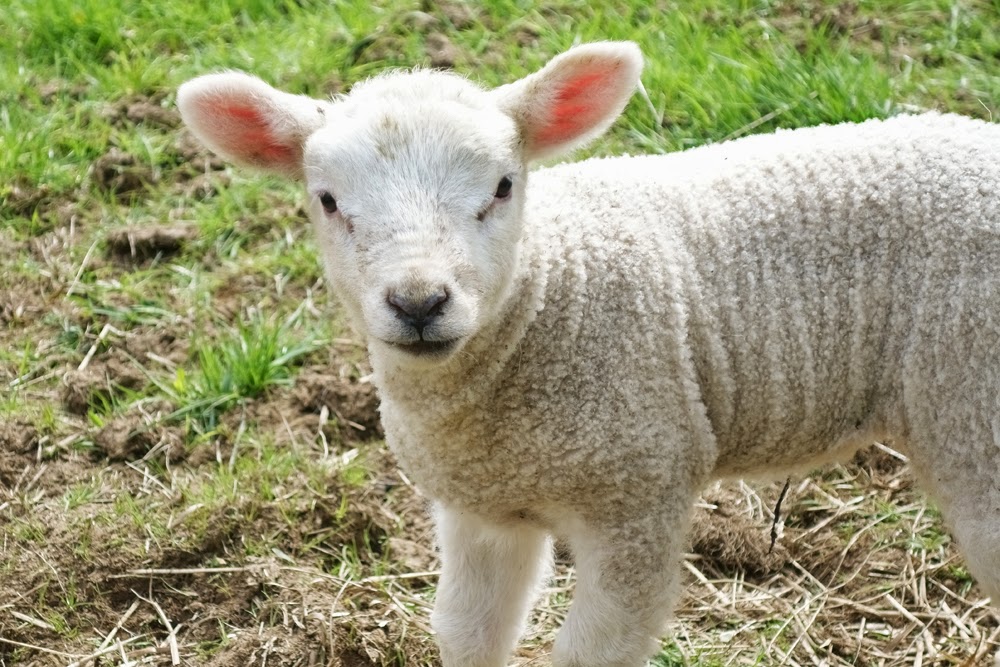 There were several routes we could have taken from this point back to the village of Chop Gate, but instead we elected to follow the quiet country road which, after a mile or so, joined the main road, at the point where we had left it at the little Methodist chapel.

The Buck Inn also has a very nice tea room where we could enjoy a very welcome hot drink before heading home from what had been a superb short break, with some highly enjoyable and interesting walking.

Leave the main road just after the Buck Inn, signposted to Carlton in Cleveland, turning off onto the public footpath which runs up the site of the little Methodist church.  Follow this path as it climbs upwards along the edge of Cold Moor.  When the path joins the Cleveland Way turn left, following the National Trail (also the route of the Coast to Coast) up over Cringle Moor and down again to the Lordstones Country Park.

From the Country Park cross the road, through a gate and then take the path to the left which climbs up over Bilsdale West Moor.  Follow this path for a couple of miles and shortly after a pond (marked on OS maps as Brian's Pond) take the path which bears left downhill with a view of Barker's Crags to the right, at the head of a pretty valley.

Follow this path gradually downhill until it joins a quiet country lane and follow the lane through Raisdale Mill to join the road. Here we took a right turn and followed this quiet country road all the way back to Chop Gate.  There is, however, an alternative route across fields to join the original track on Cold Moor and this can be followed should you wish to avoid walking on the road. 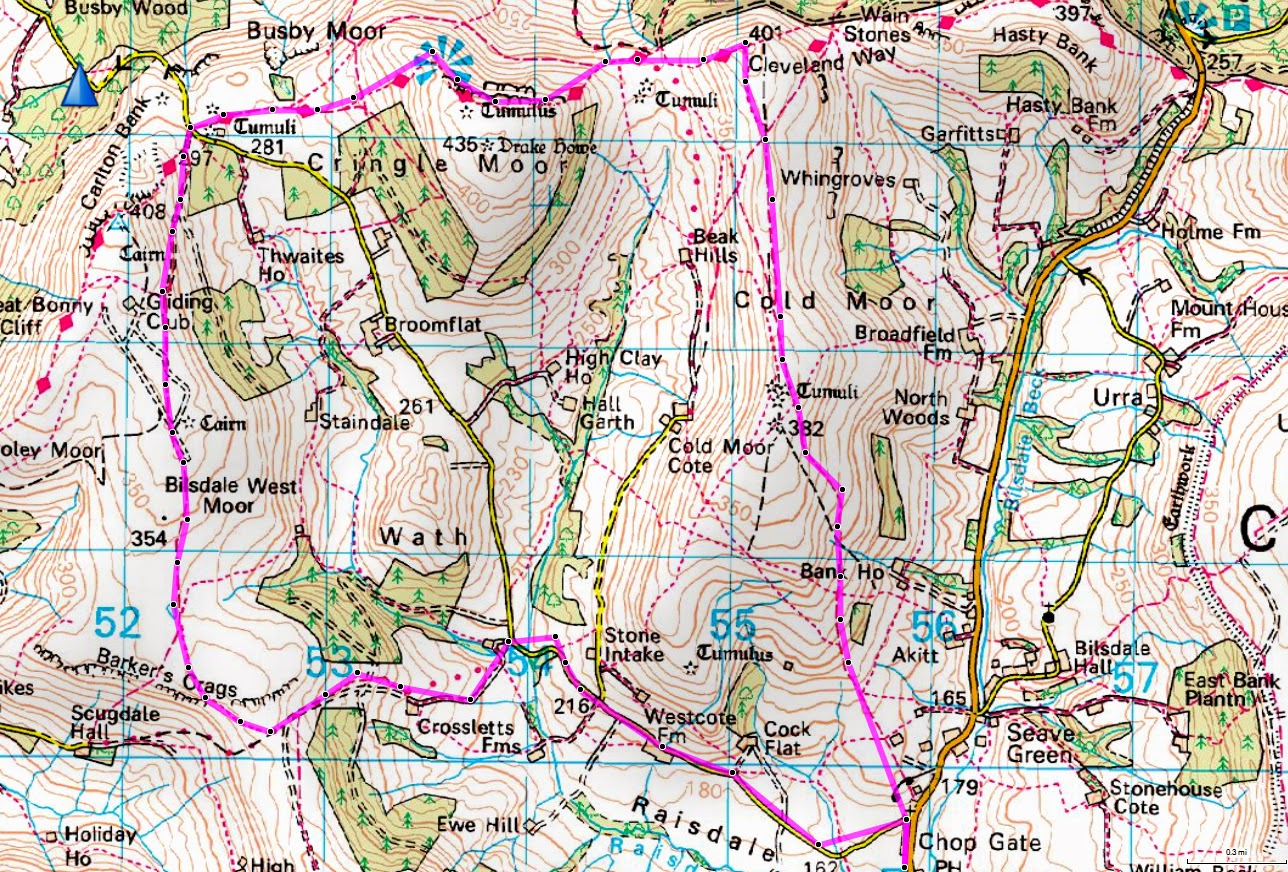 I did it!  I completed the Yorkshire Wolds Way.  All 79 miles of it, from Hessle Foreshore to Filey Brigg.  My next blog will describe my journey, experiences and will include plenty of photographs and reviews of accommodation.