I have a notebook that sits on my desk, permanently open at the first page.  The top of the page is headed "Walks I would like to do", below which there's a long, ever-increasing list of place names and routes.  It seems as though every time I visit a website or Facebook page for walkers I find yet another walk to add to this list.  And this doesn't even include the Lakeland "Wainwright" fells, of which I've climbed just over 20.  In fact, it's possibly because I've devoted so much of my spare time to Wainwright-bagging over the past year that not many walks have been crossed off my "to do" list.

At the start of a week's leave in mid October I decided that it was about time I tackled at least a couple of my "must do" walks.  And so, with that purpose in mind, I arranged for a weekend's walking centred around the two walks at the very top of my list.

The weekend began with an early morning drive to the Yorkshire Dales village of Ingleton.  Although this wasn't actually the starting point for our walk, there are a couple of excellent cafes in the village which open early to cater for walkers and cavers.  A coffee and bacon sandwich at the Inglesport Cafe set us up nicely for the day and thereafter a short drive took us to the little village of Austwick.  From here we could begin our walk to visit two areas of significant geological interest - the Norber Erratics and Maughton Scar.

It was still reasonably early when we set off from Austwick, walking out of the village along a quiet country lane.  It was unseasonably warm, with blue skies and patchy cloud cover and ahead of us the fields and hills were bathed in mellow autumn sunshine. 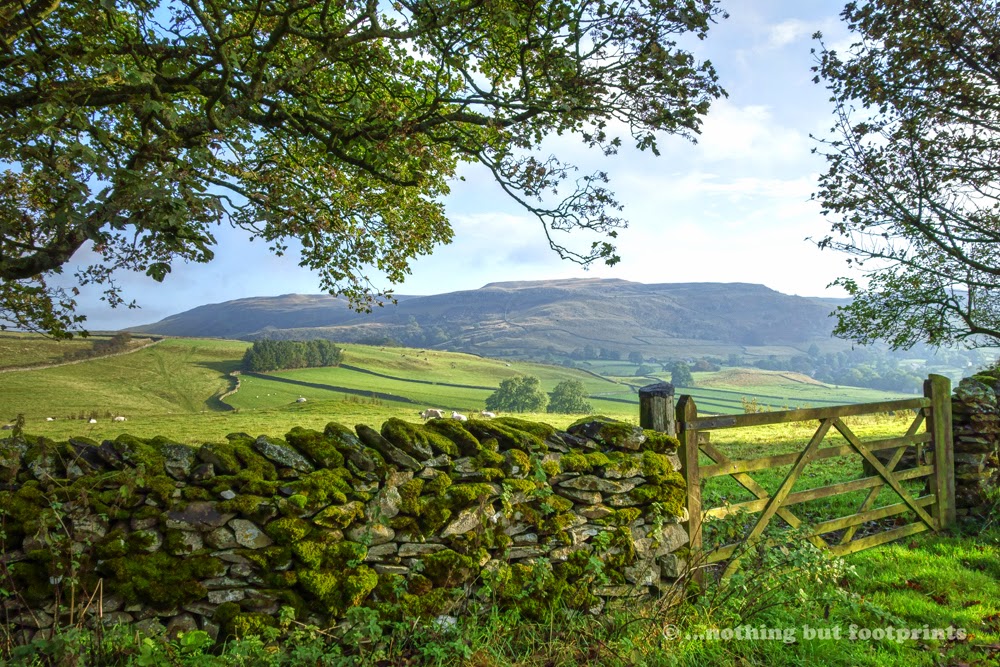 At the top of the lane we reached a crossroads of sorts, with a trail leading off across a field towards a limestone escarpment.  As we walked along a rutted track in the direction of the crags we could already see the first signs of the boulder-strewn ground which was to be our first point of interest on this walk. 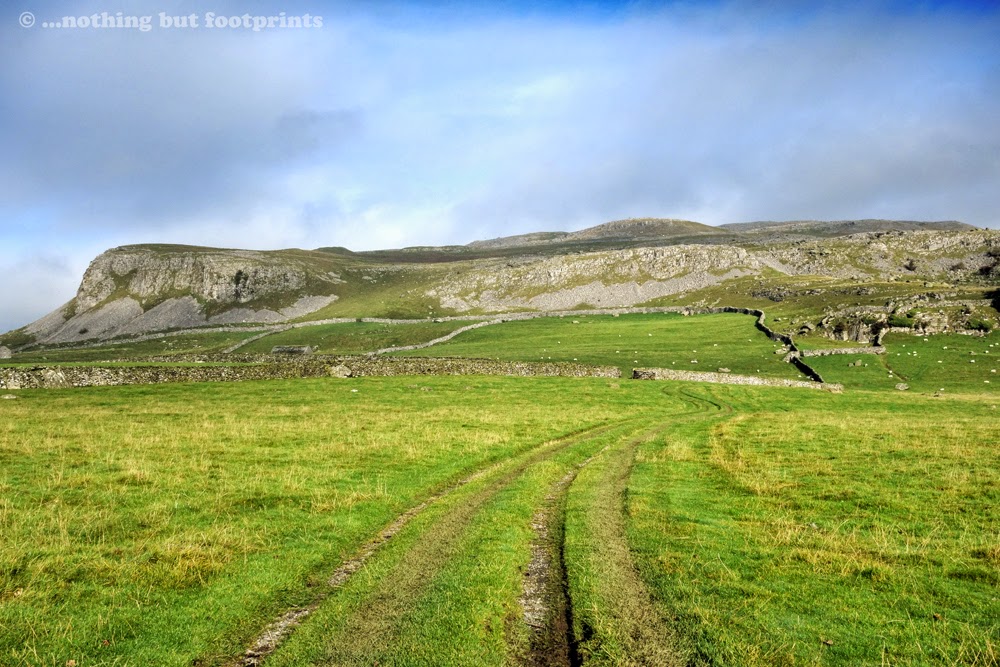 At the end of the track the terrain became a little steeper, leading up towards the rocky outcrops.  We could see that there was a clear path around the edge of the crags, but instead we decided to enjoy a bit of easy climbing, heading for a point between a large rock and a tree, ending with a very straightforward but enjoyable scramble. 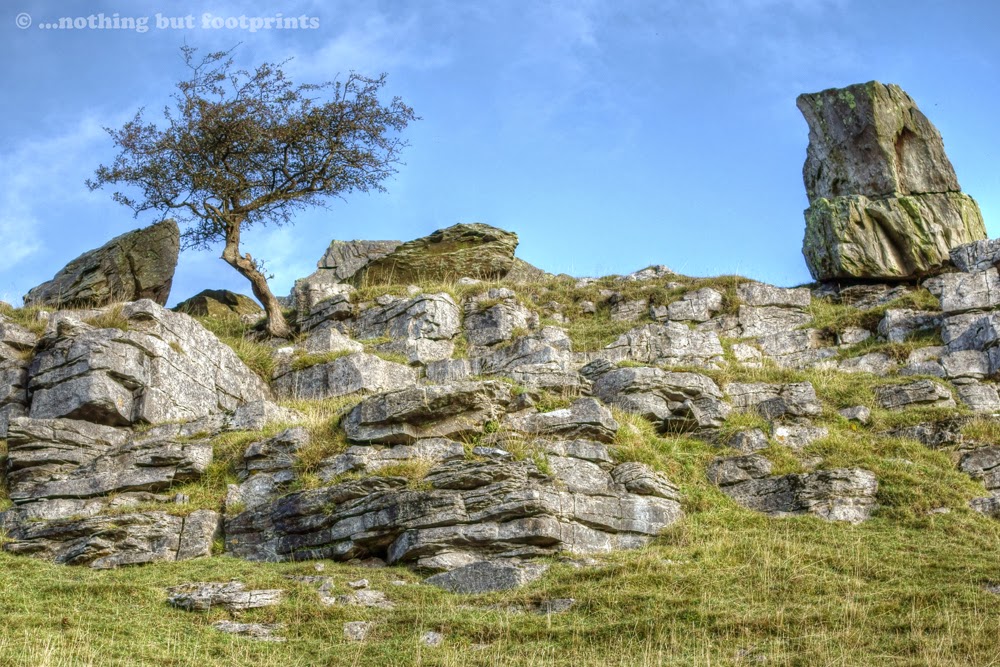 Standing on the top of the rocks afforded us with a wonderful view - a typical Yorkshire Dales scene of drystone walls, barns and distant hazy hills.  It was a sight to savour and we lingered here for a while, just soaking in the beauty of our surroundings. 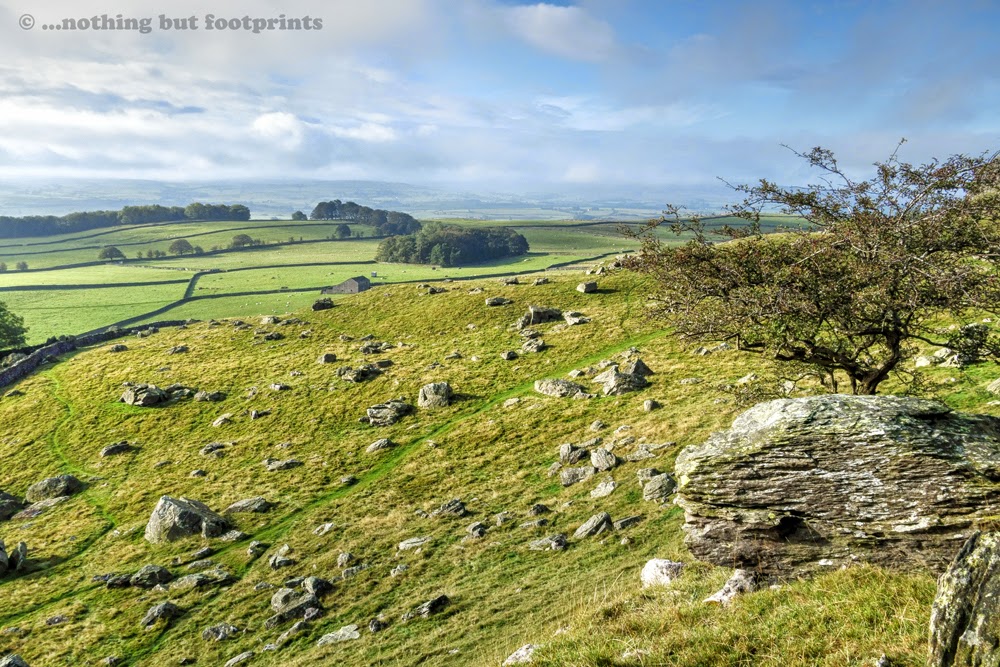 From the top of the hill we headed northwards to walk through the boulder-strewn landscape of Norber. 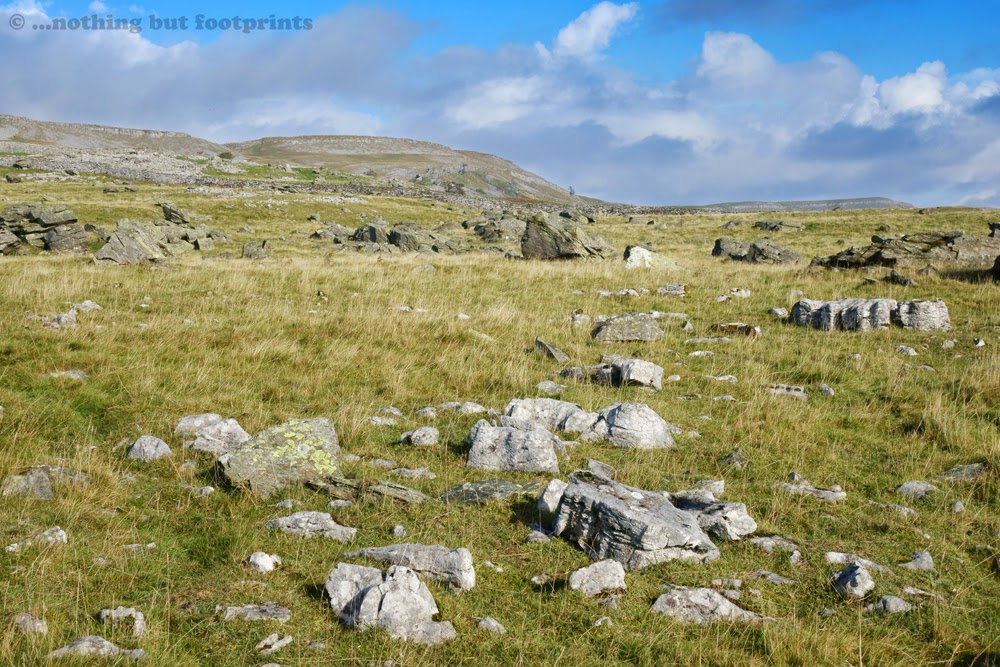 Norber
The underlying geology at Norber, like much of the Yorkshire Dales, is carboniferous limestone.  The hundreds of boulders which lie scattered around this area, however, are Silurian erratics, transported from neighbouring Crummack Dale by glacial movement during the last Ice Age.  As the ice melted at the end of the Ice Age, the Silurian boulders were deposited on top of the limestone.  Over the passing years, rainwater has eroded the limestone but the boulders have acted like umbrellas, protecting the limestone beneath them, leaving many of them resting, almost precariously, on little limestone plinths, like the example below. 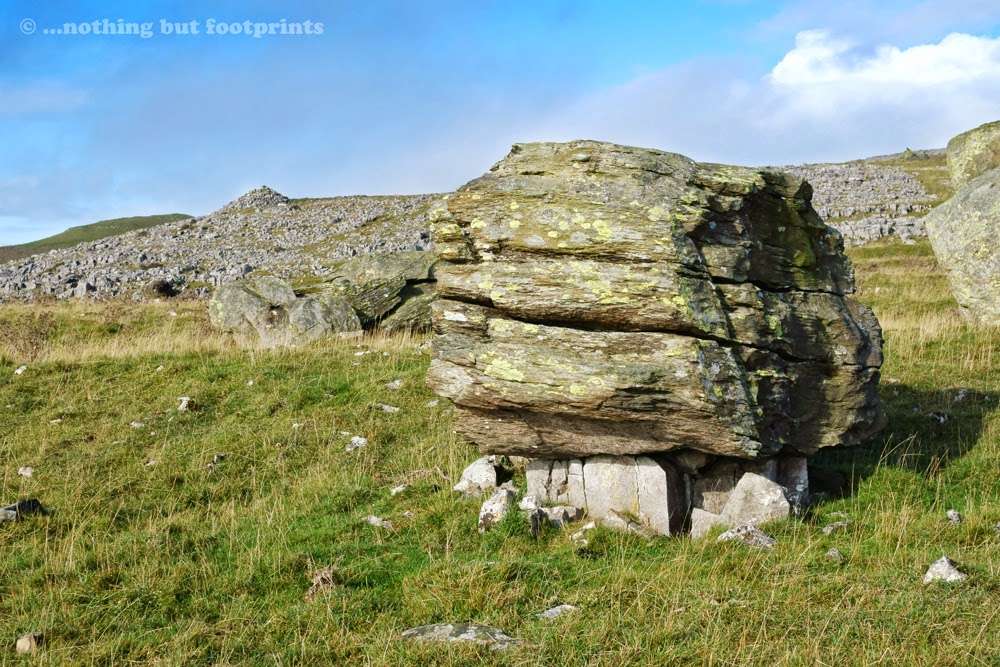 We wandered amongst the boulders for a while, enjoying the scenery and the warm sunshine.  It was a real treat to have this strange, almost incongruous landscape all to ourselves. 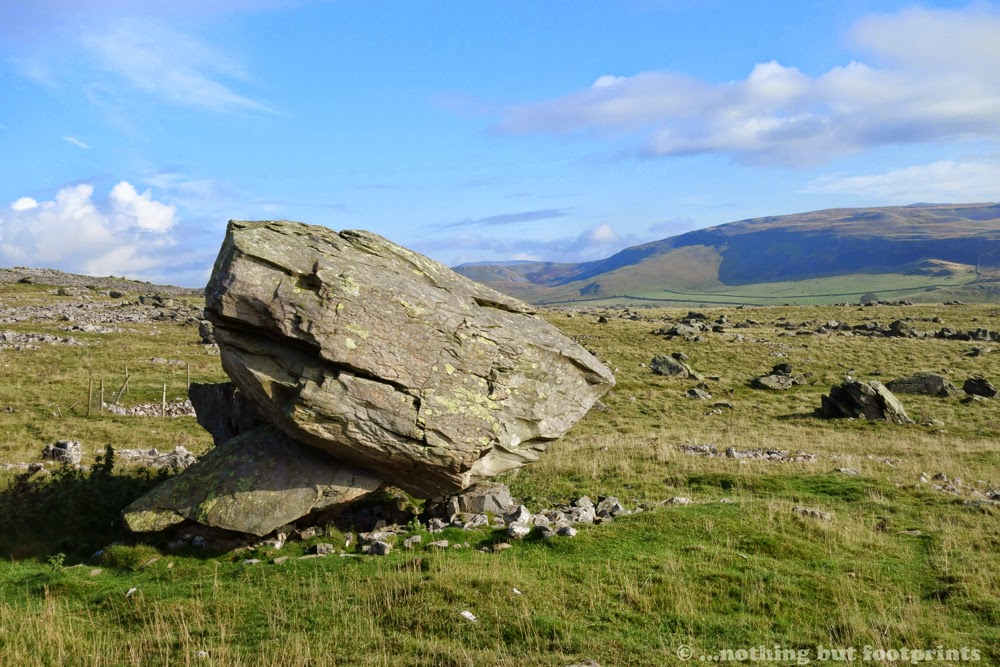 From Norber I had plotted a route which would take us over a small area of limestone pavement, to join a path which would lead us below the lower slopes of Ingleborough towards Maughton Scar.  To begin with this entailed a short climb away from Norber, passing more of the precariously balanced boulders along the way. 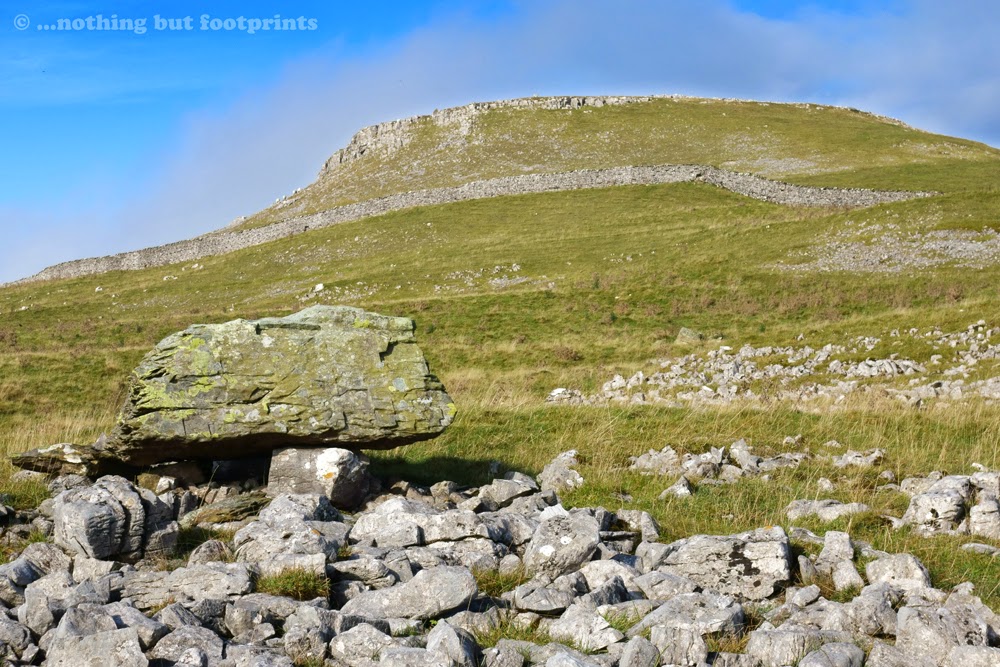 After we'd left the boulder field behind us, we encountered our first, small section of limestone pavement, giving a sample of what lay in wait for us further along on our walk at Maughton. 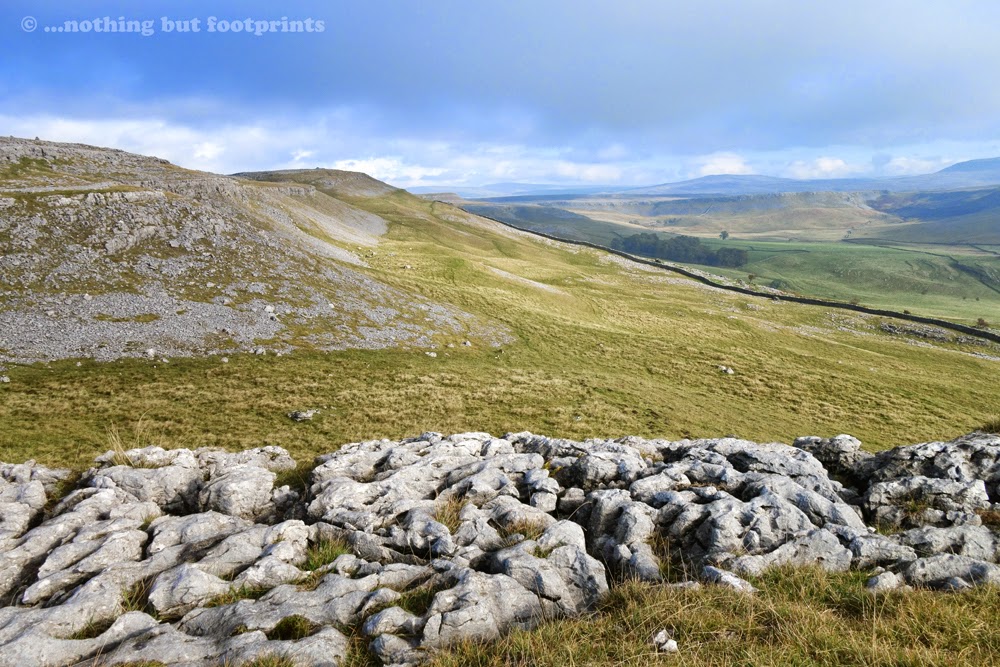 As we climbed higher up the hillside, I stood for a while on the limestone and looked back along the route we'd just taken.  From this vantage point we had a lovely view across the landscape to the distinctive outline of Pen-y-Ghent. 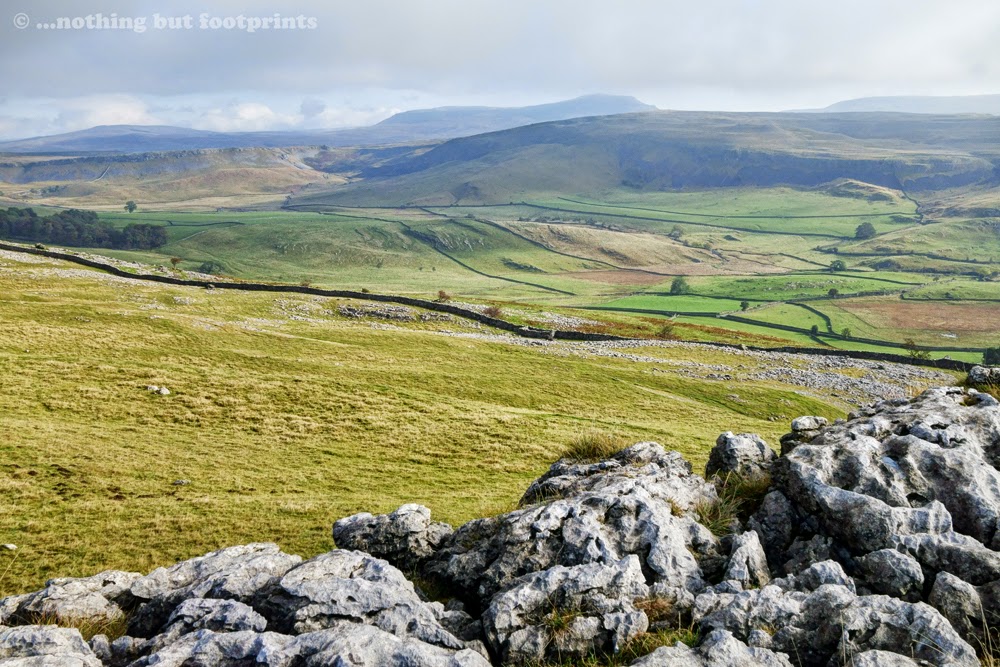 The limestone pavements of the Yorkshire Dales were formed at the end of the last Ice Age, when the retreating glacier scraped away the surface, exposing the limestone which has subsequently eroded to produce cracks and slabs.  These are known as "clints" (the slabs) and "grikes" (the fissures) and walking across them can involve something of a balancing act, as I discovered along this short section of pavement.  As I tottered about on one of the clints to take a photograph, I wobbled slightly, pitched forward and lost one of my water bottles down a grike.  I was able to retrieve it, but as I picked it up liquid spilled out of a crack along its side.  It had been well and truly griked! 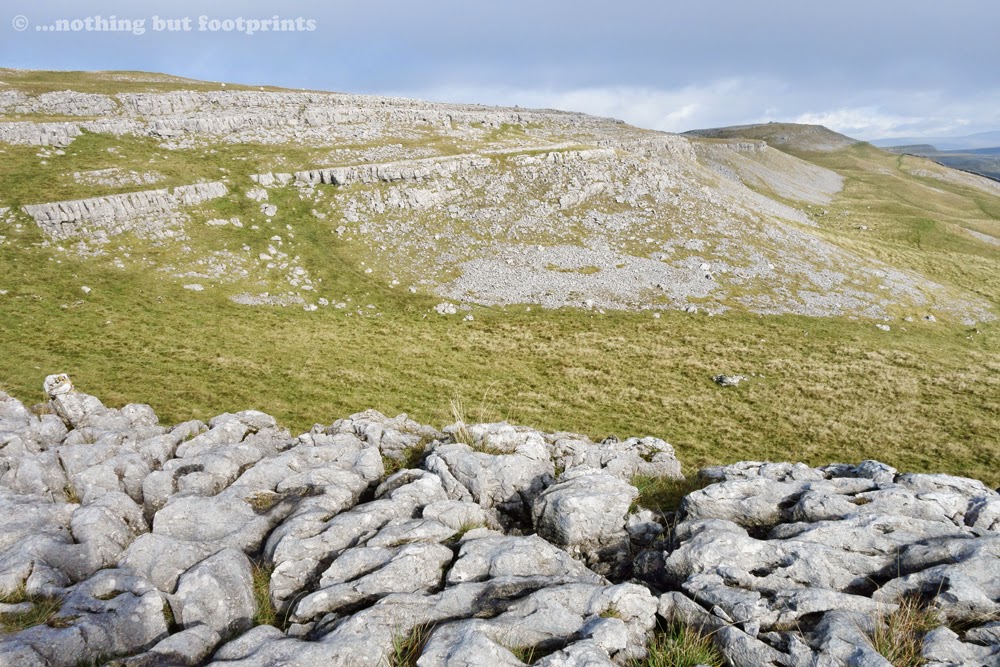 At the top of the hill we followed a drystone wall which cut through an area called Thwaite Scars, from which point we should have had a view across to my favourite Yorkshire mountain, Ingleborough.  Although the day remained warm, low cloud had descended, obscuring the summit from view.  In the valley to our left we could see a little building which is the entrance to Ingleborough Cave - a spectacular show cave which has been open to visitors for over 175 years. 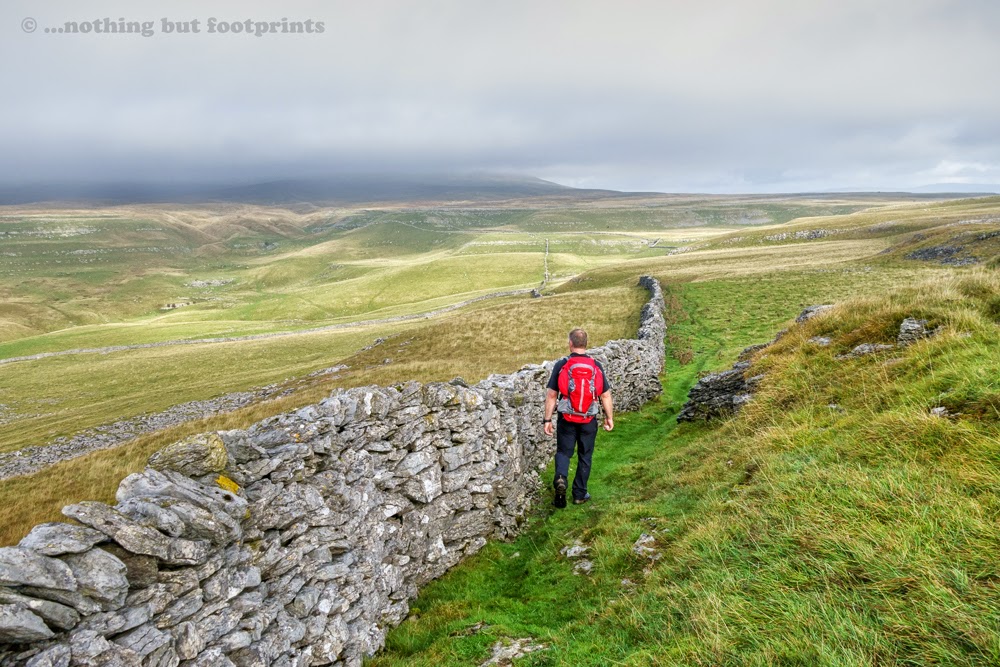 We continued to follow the wall until it formed a junction with another wall, from where a path led us off in the direction of Crummack Dale and Maughton Scar.  The top of Ingleborough continued to be obscured by cloud cover, but I could make out a network of paths leading towards its summit.  Below us to our left lay the wooded limestone ravine of Trow Gill and a route up Ingleborough via Gaping Gill.  It looked like an excellent route and I made a mental note to add it to my list. 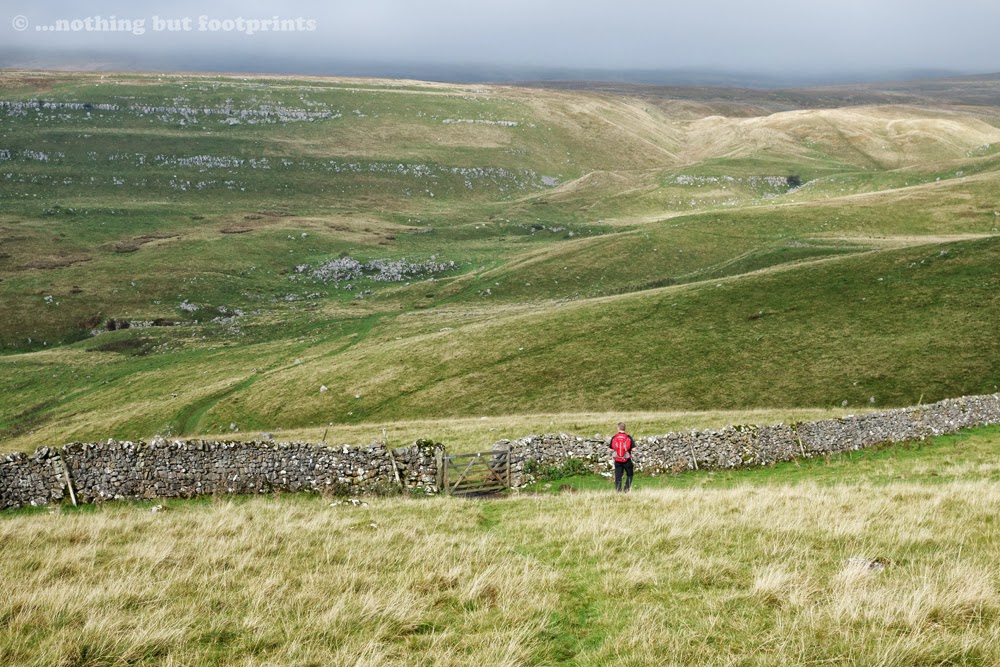 Above Trow Gill
Our route now led us away from Thwaite Scars and there followed a pleasant walk across the higher ground in the direction of Crummack Dale.  After about a mile or so we looked over a wall to be met with the most magnificent sight - the spectacular limestone pavement of Maughton Scar with a cloud-topped Pen-y-Ghent visible in the background.   It was so beautiful.  The sky somehow seemed to reflect a bluish tinge onto the grey limestone which I attempted (inadequately) to capture with my camera.  I thought it  was one of the most beautiful landscapes I've ever seen. 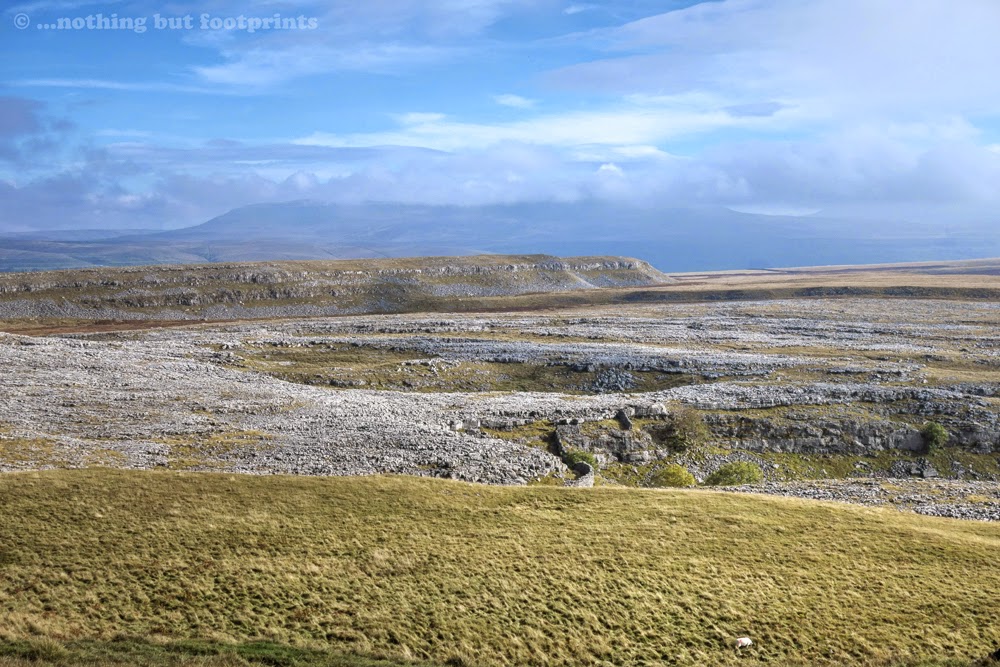 We skirted around the uppermost edge of Crummack Dale before finding a gate at an area known as Thieves Moss, where a path led us downhill and into the valley bottom.  This took us along a route below Maughton Scar, passing a Swaledale sheep who obligingly posed to create a typical Yorkshire Dales scene. 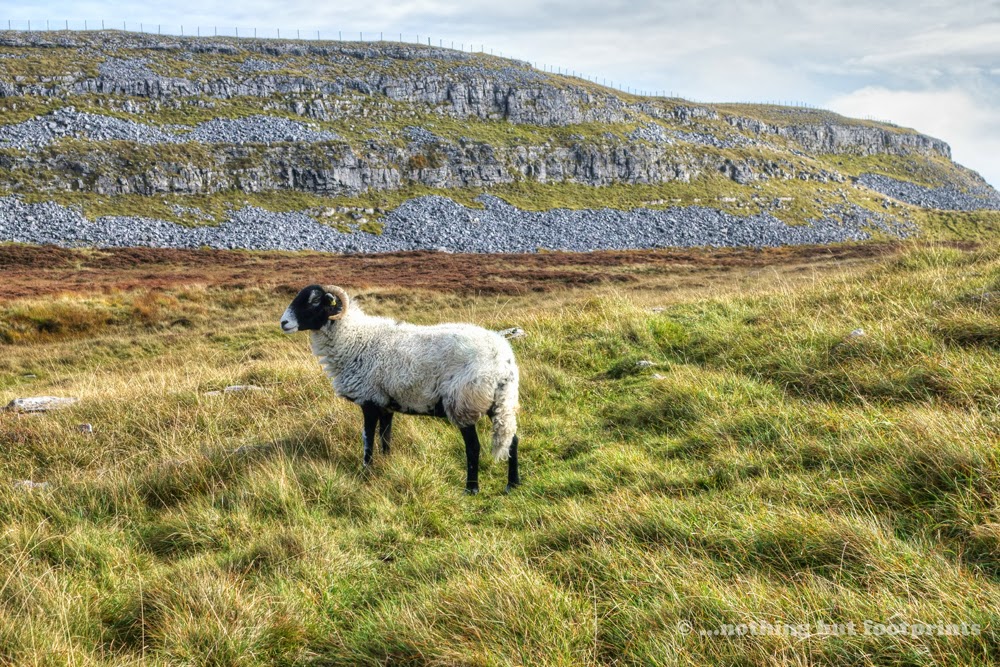 Having climbed up onto the edge of the pavement, we had a lovely view back towards the ridge we had just walked along, and also to the top of Ingleborough which was just starting to become visible through the low clouds.  Here we sat for a while to enjoy a packed lunch in the sunshine.  It was so pleasantly warm that it was hard to believe it was the middle of October. 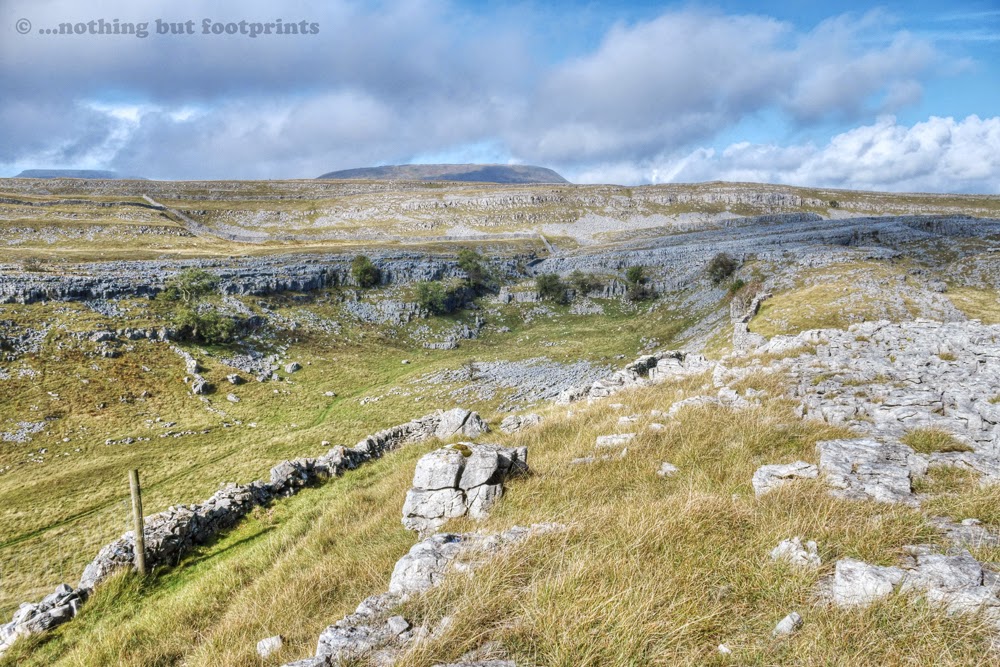 Looking across to Ingleborough

We resumed our walk at Beggar's Stile - a gap in the limestone with a ladder stile over a drystone wall. 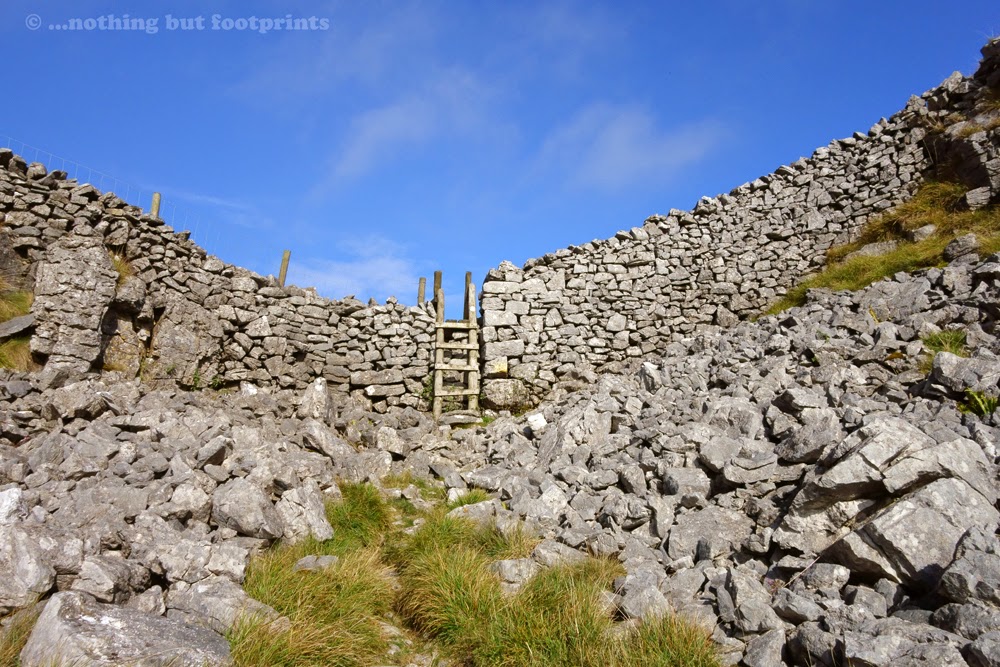 Climbing down from Beggar's Stile took us into Crummack Dale, from which point there was a very pleasing view across the Long Scar - the route we had just taken from Thwaite Scars to Thieves Moss. 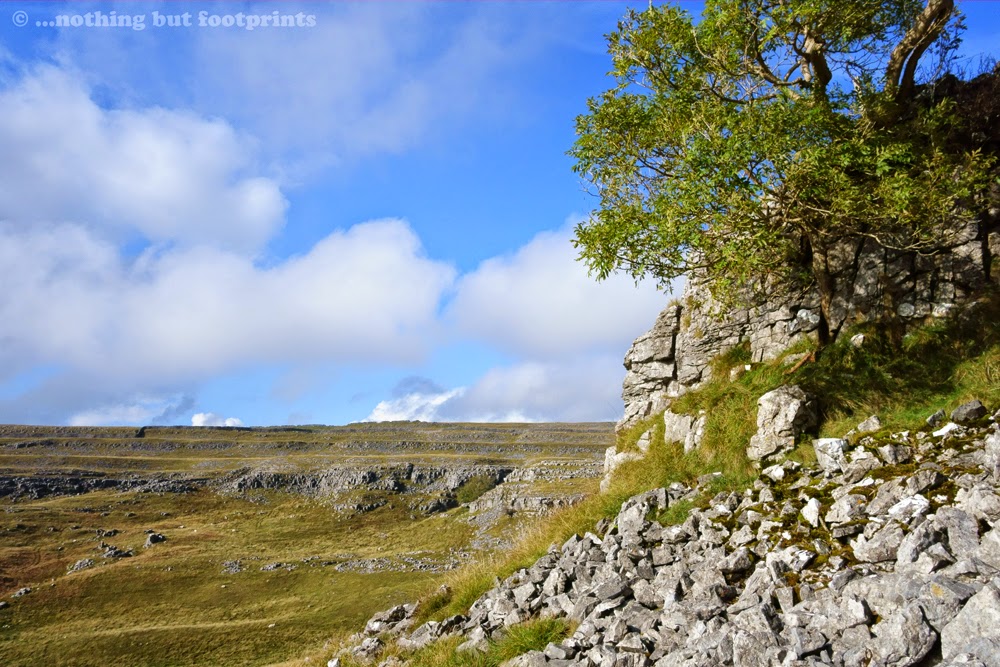 As we continued to follow the path through Crummack Dale in the direction of Crummack, the cloud lifted and Pen-y-Ghent came into view again over the edge of Maughton Scar. 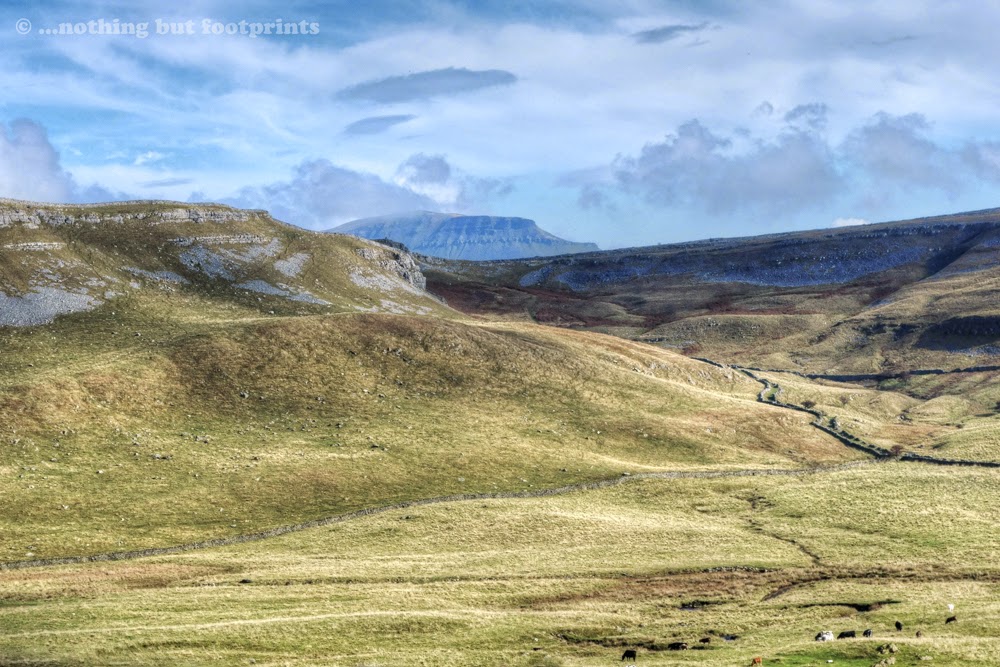 Our route now followed a track from Crummack which led us all the way back to the village of Austwick, passing close by the village of Wharfe, nestling in the valley bottom. 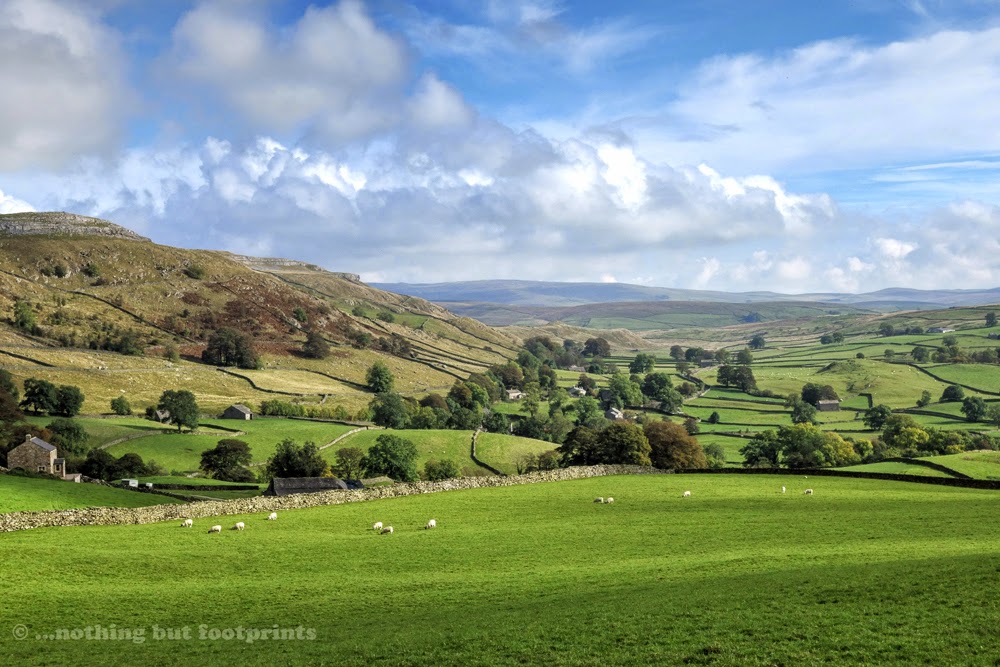 This had been a superb short walk of approximately eight miles, incorporating some of the finest features and scenery that the Yorkshire Dales has to offer.  I'd wanted to complete this walk for a long time, thereby enabling me to tick it off my "must do" list.  However, having experienced the stunning beauty of this area, and having seen on the map just how many alternative routes there are around here, my list has actually grown a little longer.

Coming soon.... The second day of our weekend was spent exploring the Howgill Fells from our base near the town of Sedbergh.
at 07:53