After completing a most enjoyable walk around the Norber Erratics and Maughton Scar, just north of Austwick in the Yorkshire Dales (see earlier blog), we travelled to an inn, just five miles to the south of the town of Sedbergh.  Our base for the rest of the weekend was the charming and slightly quirky "Head at Middleton" - a pub with lovely, well equipped rooms (ours even had its own little kitchen), delicious food and quite possibly the worst selection of beer in any pub I've ever visited.  The best beer on offer was Guinness, which was poured into a glass from a can and then somehow fizzed up with a device on the bar.  For the first time in ages we ordered wine with our evening meal.

The Howgill Fells nestle snugly between the Lake District and the Yorkshire Dales and whilst mostly contained within the western boundary of the Yorkshire Dales National Park, they are actually geographically situated within the modern day county of Cumbria.  I'd wanted to walk in the Howgills for a long time, having studied Wainwright's little guidebook to the area, "Walks on the Howgill Fells" and so for day two of our weekend break I'd planned what must surely be an all-time classic walk.

The quality of the breakfast and the friendliness of the owners at "The Head" more than compensated for the paucity of beer.  The morning was bright and sunny, but quite frosty to begin with, and we were certainly glad to have had a hearty breakfast before setting out.  Having parked in the centre of Sedbergh we headed out of the town to join a path which climbed through the bracken on the southern side of the fells.  We didn't have to climb for long before we were treated to a beautiful, misty view of the valley below. 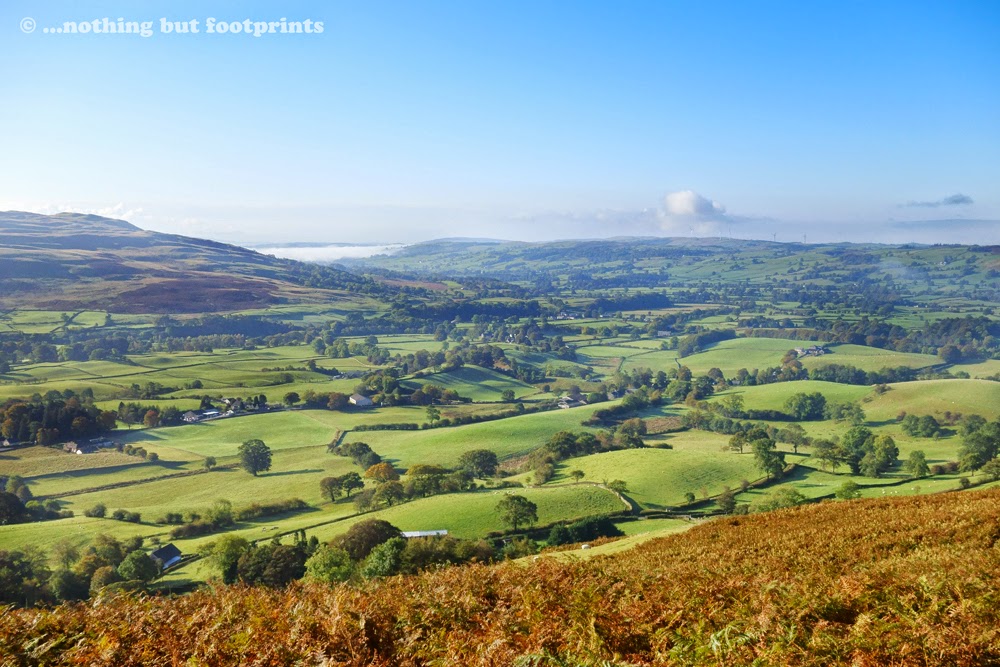 A little further along we could look down across the town of Sedbergh, the sound of Sunday morning church bells drifting across on the breeze. 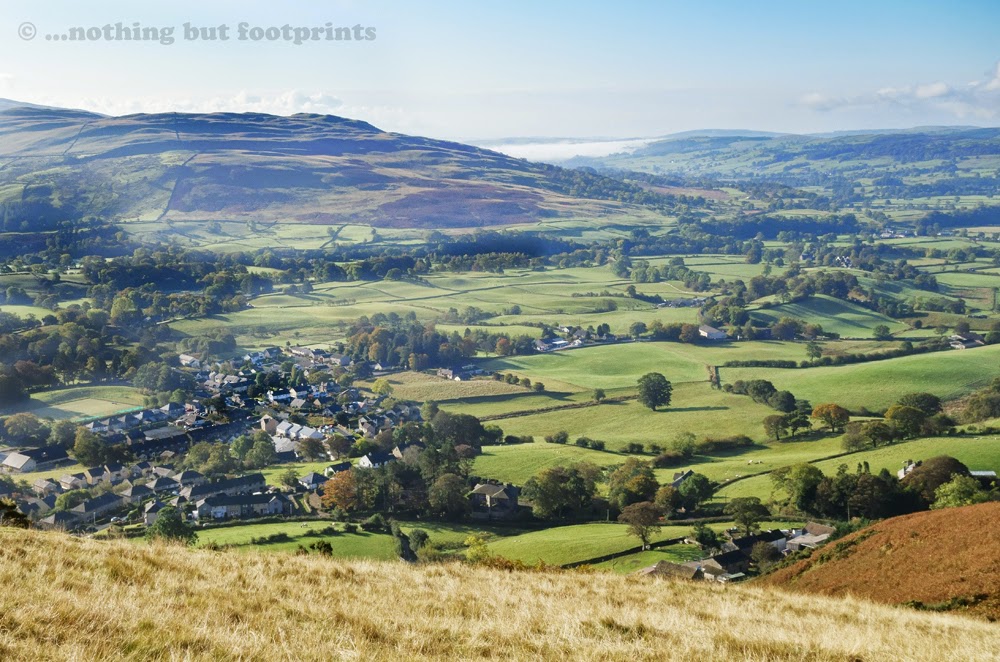 The path ahead of us was clearly defined and the sky was almost free of clouds as we gradually ascended.  Most of the literature I'd read about the Howgill Fells commented on how peaceful it could be, with very few people choosing to walk here when compared to the more popular Lake District or Yorkshire Dales.  This certainly seemed to be true as we followed the path upwards.  As far as we could see there didn't appear to be anyone else around. 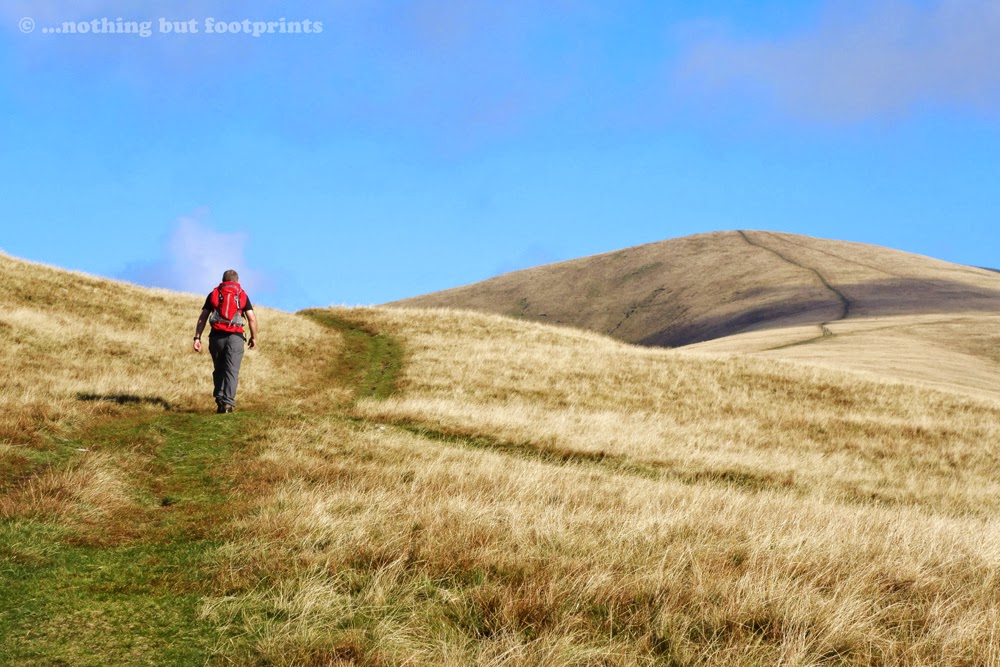 The way ahead is clear

The underlying geology of the Howgills is a combination of siltstone, mudstone and sandstone, swathed in windswept grasses and bracken, making walking here a very different experience to the rocky paths of Lakeland or the limestone pavements of the Dales.  The curvaceous landscape appears to roll and fold in a very attractive way and the paths, which were mostly dry at the time of our visit, were pleasing to walk along. 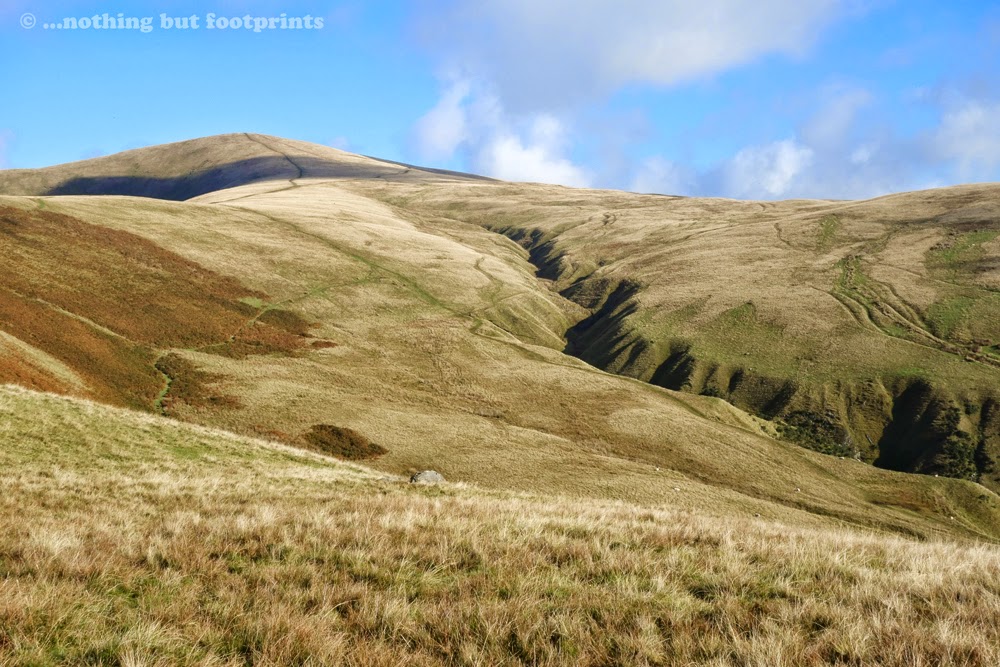 A light covering of cloud was drifting across the tops with shadows dappling the undulating landscape.  As I walked along, admiring the gentle beauty of my surroundings, I was reminded of one of Wainwright's more poetic metaphors for these hills, which he described as being “like velvet curtains in sunlight; like silken drapes at sunset”. 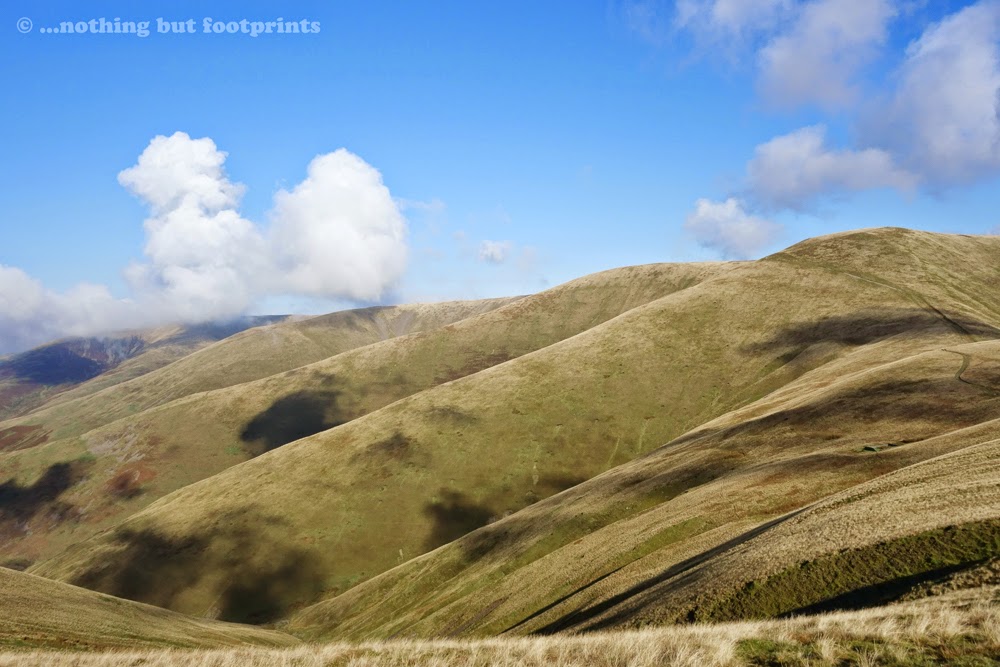 Perhaps the most well-known of Wainwright's descriptions of the Howgill Fells, however, is his likening them to a "herd of sleeping elephants" and, although this is perhaps most clearly realised when viewed from a distance, as more and more folds and valleys came into view, I could see what he'd meant. 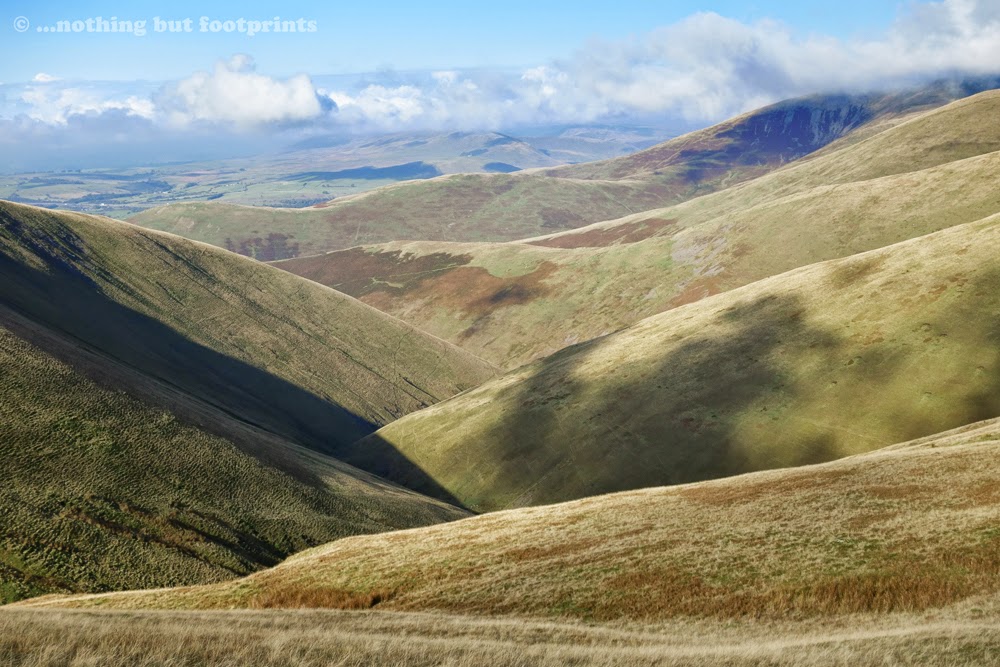 A herd of sleeping elephants

Eventually we had climbed high enough to be able to look out over the land to the west, between the Howgills and the foothills of the Lake District.  At this point I'd been hoping for a view of distant mountain peaks, but the clouds had gathered and we could see very little of the land beyond the line of the busy M6 motorway. 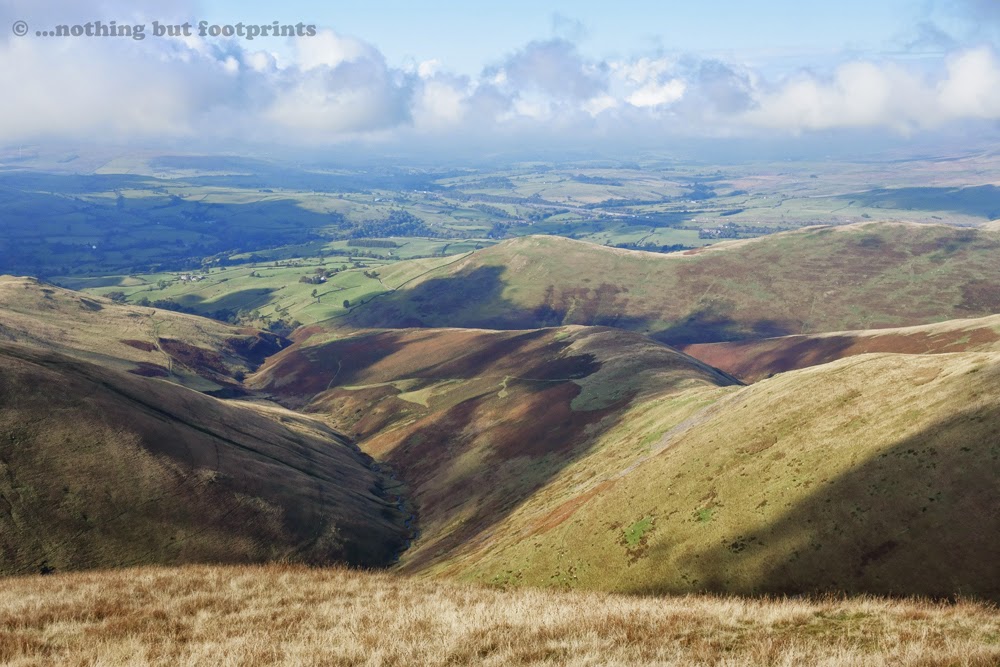 From this point our ascent became steeper and, as the sun beat down on us, it was easy to forget that it was actually mid October.  The fleeces and soft shell jackets we'd started out in had been discarded and we were now just wearing short-sleeved base layers. 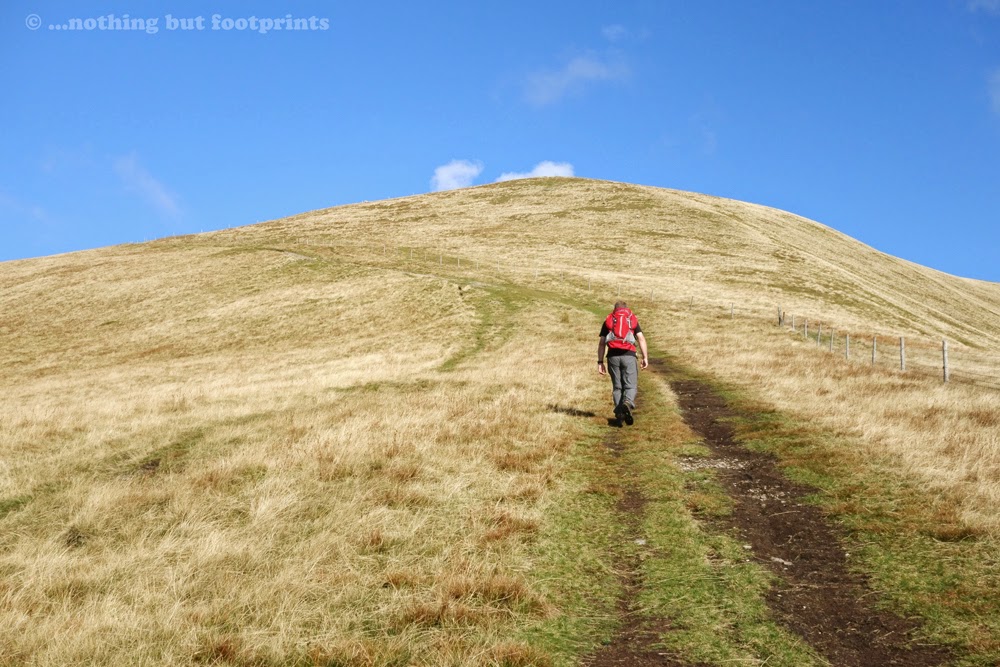 The path gets steeper

The summit, and turning point, for our walk was the highest peak on the Howgills.  Marked by a triangulation point, The Calf stands at 2,218 feet (676m) and its summit afforded us with lovely, albeit a little hazy, views all around.  We took a short break here for a drink and a to take a few photos before turning eastwards, to begin our descent. 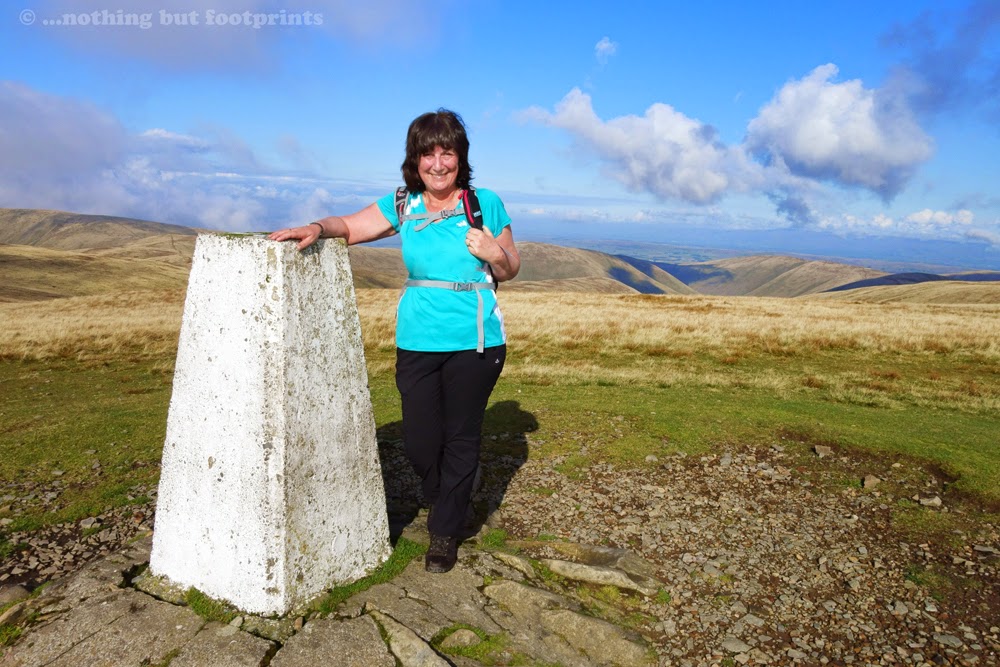 The summit of The Calf

The downwards gradient wasn't too steep to begin with , and we enjoyed excellent views across to Wild Boar Fell and Baugh Fell in the east. 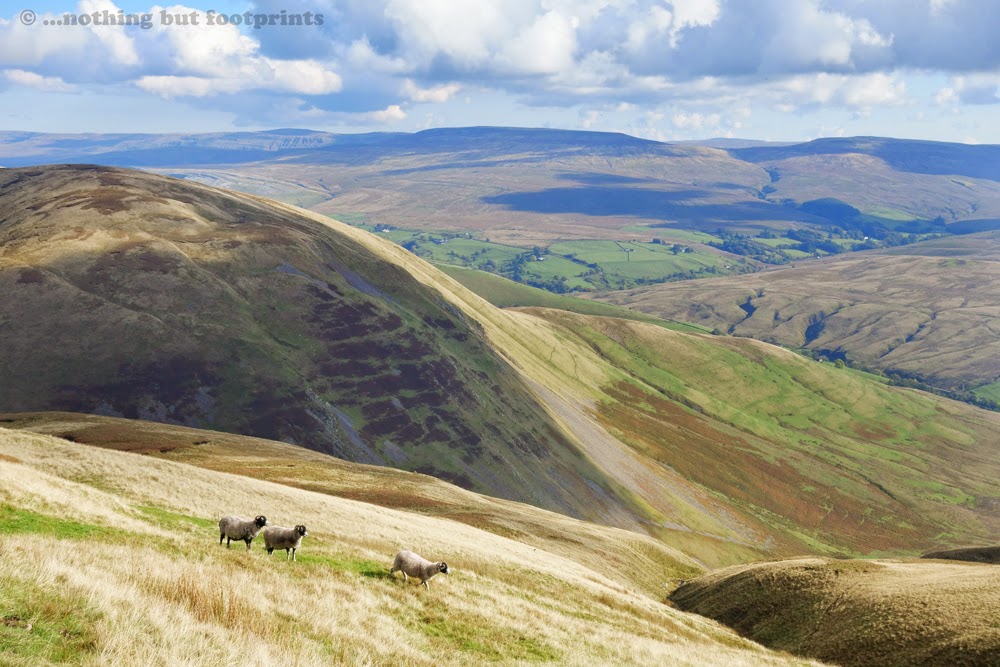 Looking over to Wild Boar Fell

We were now on the very eastern edge of the Howgills and at this point the path turned to descend steeply down the side of a valley. 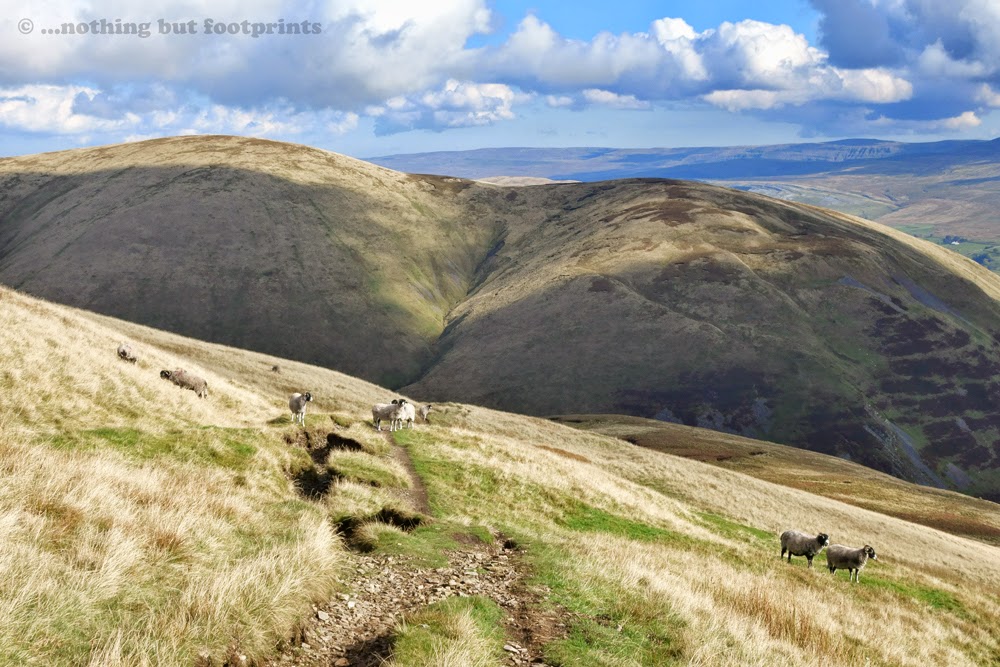 The descent gets steeper

After a fairly sharp descent we left the path which led into Bowerdale and cut across to rejoin it at the head of the valley. 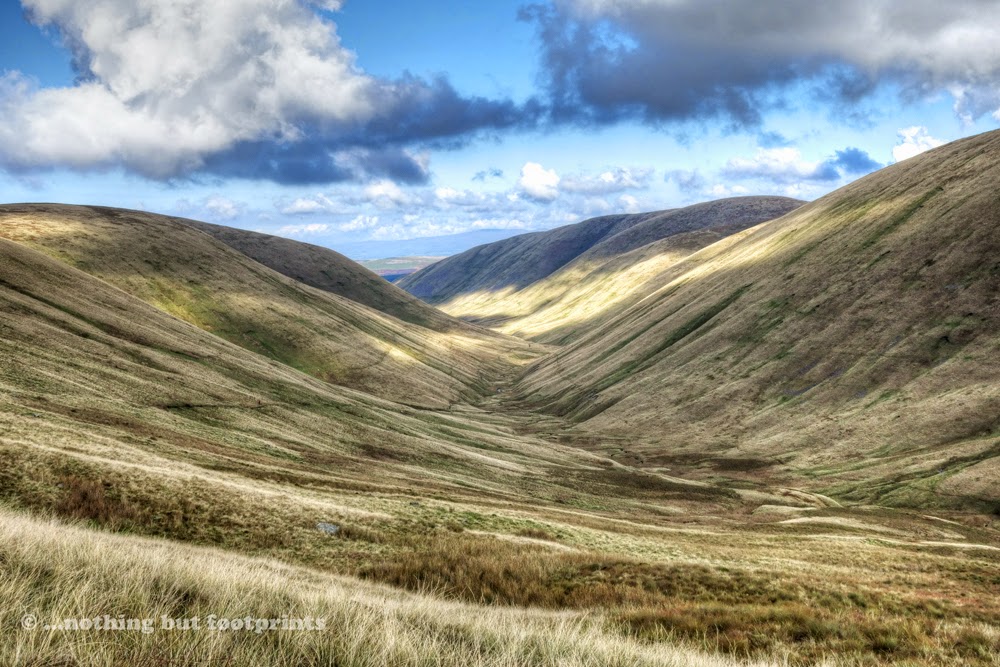 My original intention had been to find a path down the side of the waterfall of Cautley Spout, but this path actually led us away from the falls.  It did, however, mean that we had a good view across to Cautley Crag and the very top of Cautley Spout. 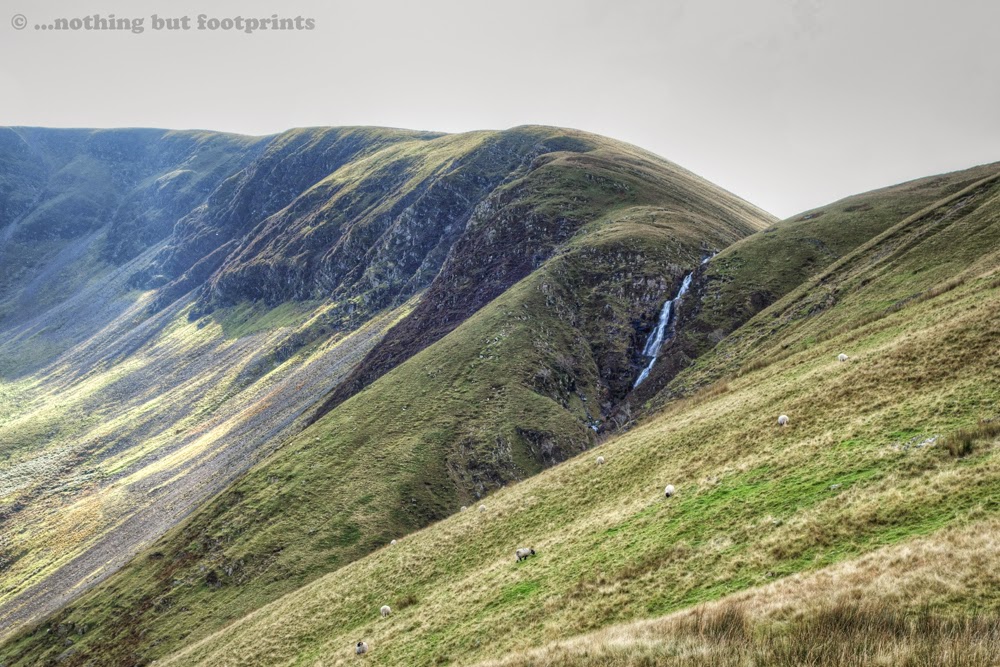 At the top of Cautley Spout

As we followed the path steeply downhill, we could see a small group  of people climbing down the side of the falls.  Our path was steep enough, but the path at the side of the falls looked steeper still, so although we weren't taking the route I'd originally planned, I was happy.  And the view was lovely. 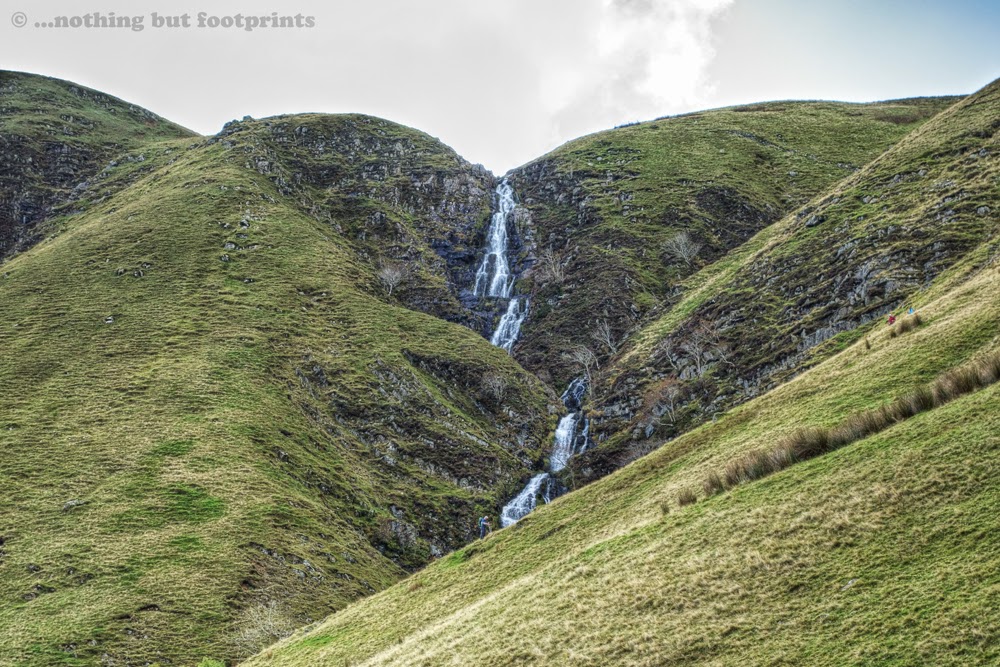 Eventually the path became a little easier and the view along Cautley Holme Beck and eastwards towards Wild Boar Fell was breathtakingly beautiful. 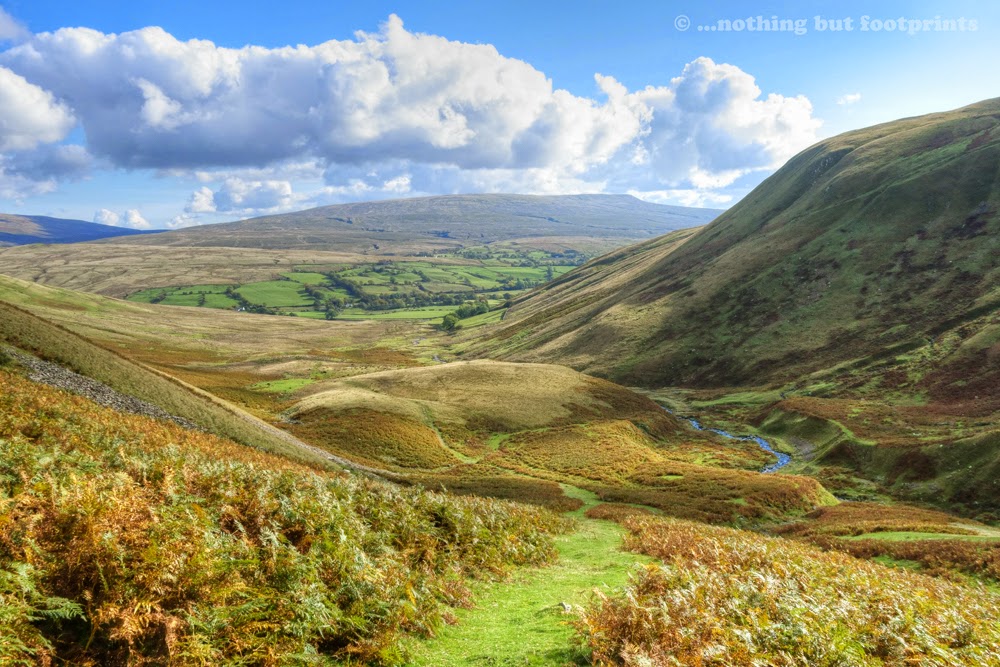 All the while we were descending I kept on looking back, captivated by the sight of sunlight sparkling on the cascading waters of Cautley Spout. The route I'd planned was to take us around the eastern edge of the Howgills, following the valley all the way back to Sedbergh.  But first we decided to go in search of refreshment and so we left the route and crossed a little bridge over the River Rawthey. 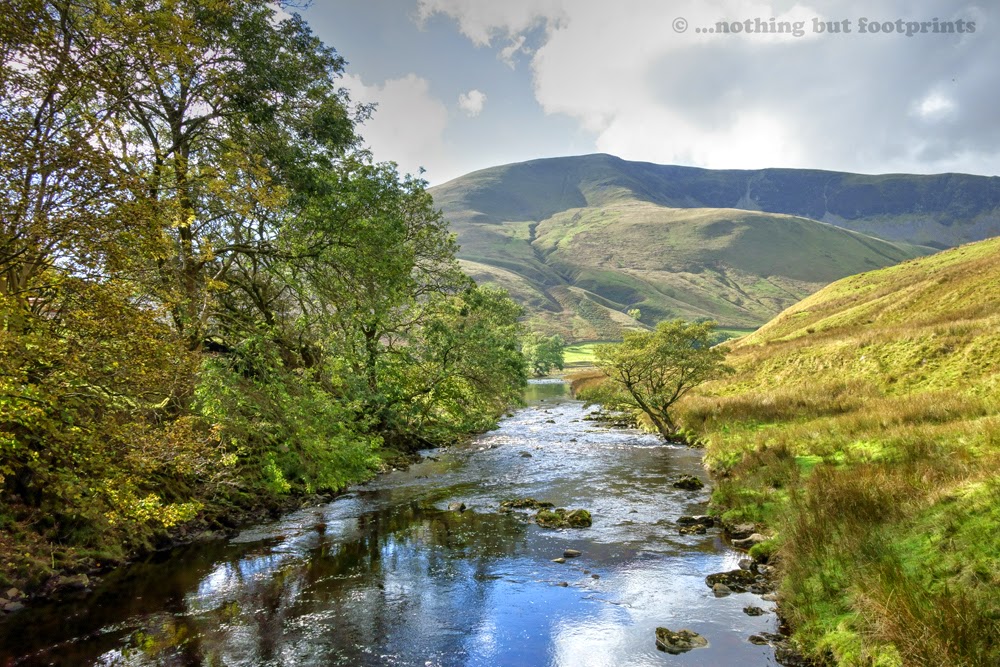 The Cross Keys is a temperance inn, built in the 16th century and extended in the 18th and 19th centuries.  Now in the ownership of the National Trust, the Cross Keys was originally a farmhouse, becoming an inn in the early 1800s.  In 1902 it had its liquor licence removed and since that date has been a temperance inn, which means that it serves non-alcoholic beverages only. 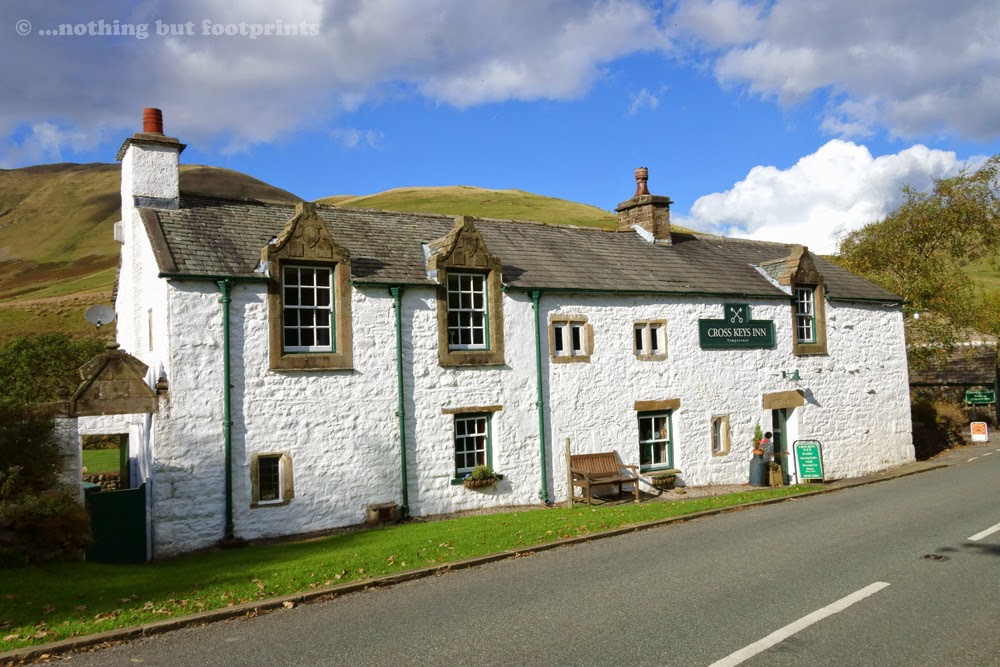 The interior of the inn was quirky and charming, almost like a museum.  It was also very hot and busy, and so we retreated to the beer-free garden at the rear where we enjoyed a glass of rose lemonade in the afternoon sunshine, accompanied by a delicious slice of homemade carrot cake. 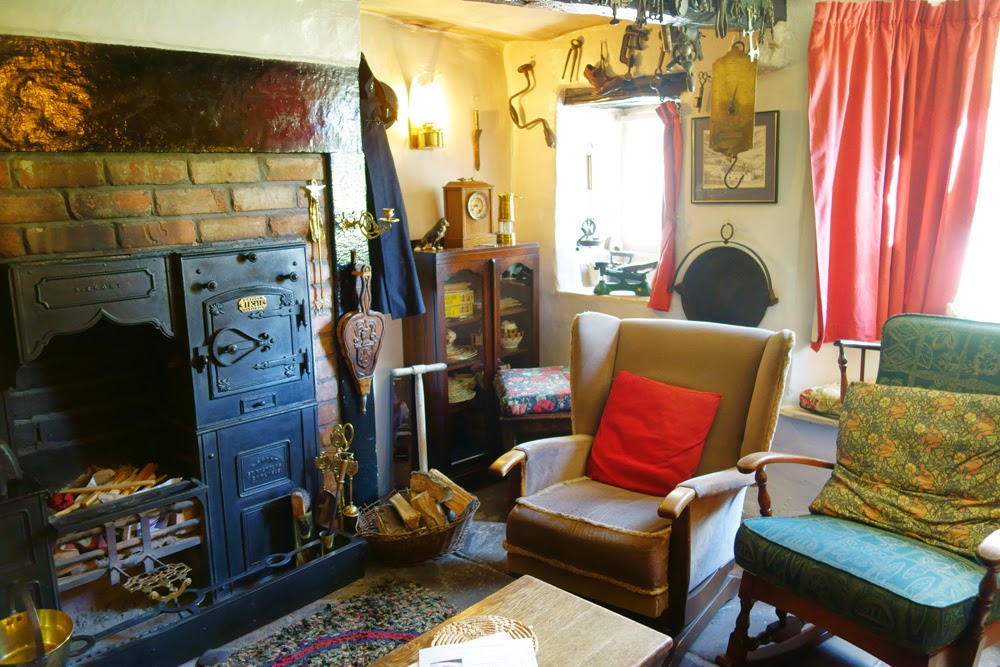 Suitably refreshed we continued on our return journey, skirting around the easternmost base of the Howgills.  The path was shaded by the hills but the afternoon was still pleasantly warm. 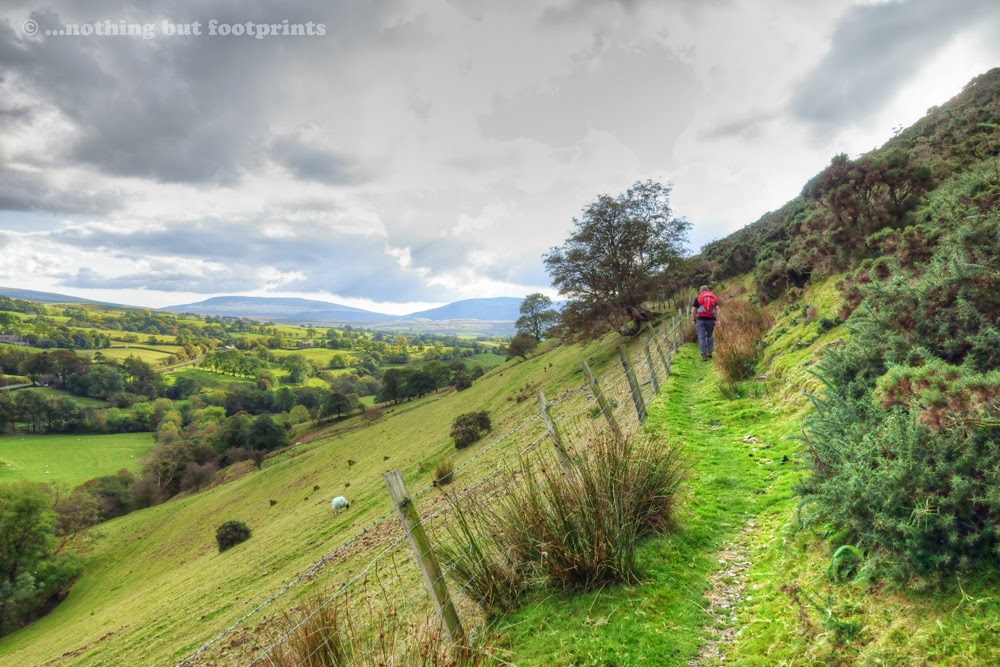 The return route was mostly level, easy walking, with very pleasant views all the way. 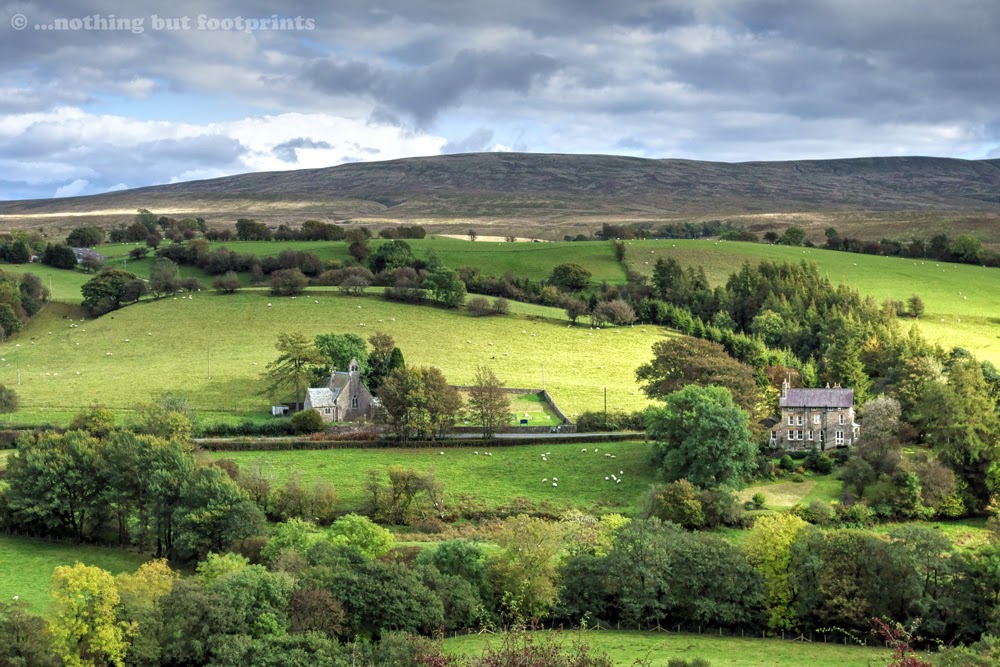 On the short drive back from Sedbergh to "The Head at Middleton"  I pulled over to take one last look at the Howgills, bathed in mellow autumn sunshine.  I'd thoroughly enjoyed my first encounter with these gentle giants, and I drove away resolving that my first visit to the "sleepy elephants" wouldn't be my last. 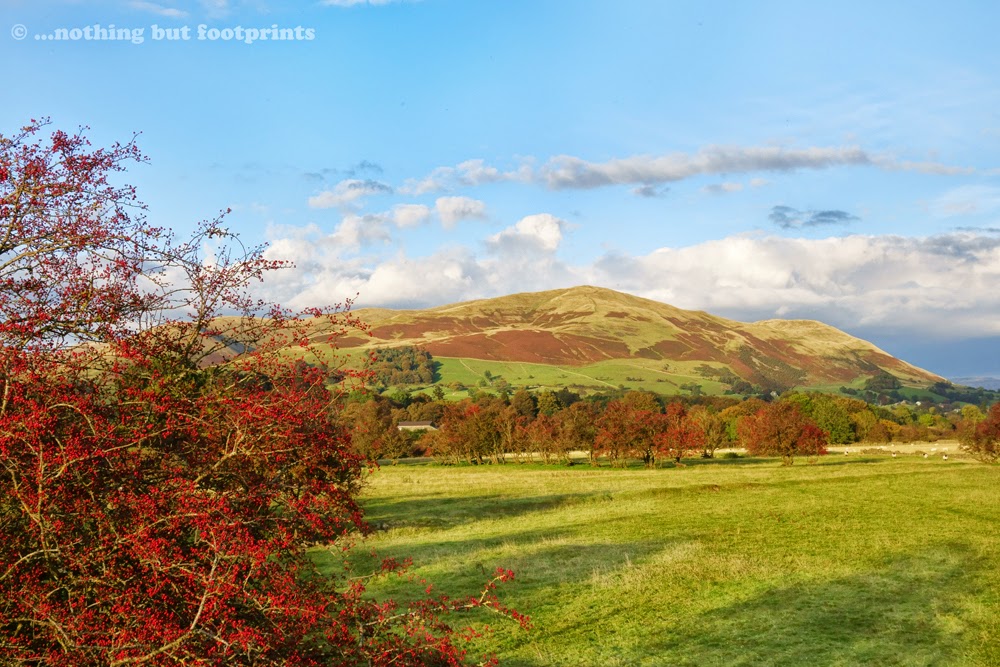 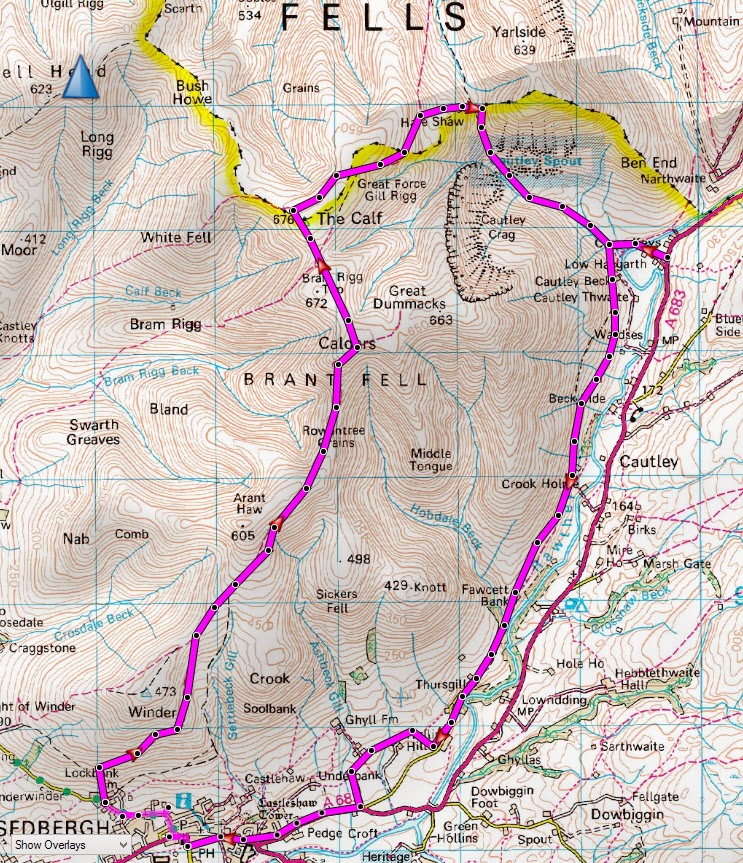 Coming soon...One week after our exploration of the Howgills we returned to the Lake District in very different conditions, for a blustery encounter with Grasmoor.