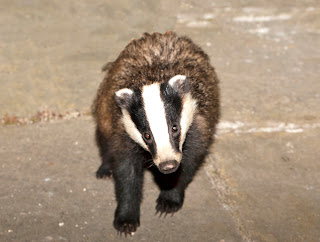 Until last week I had never seen a badger.  Well, actually, that's not strictly true.  I'd seen them on television nature programmes and, sadly, I've seen several dead ones at the side of the road.  I even got out of the car once to take a close look at one which had been recently mown down and, for a brief moment, I considered taking it to a taxidermist.  In the end though I drove on and left it for someone else who fancied the idea of having a stuffed badger in their living room or, more likely, as a substantial meal for the crows.

Then last week my badger drought ended.  Suddenly I found myself keeping nightly company with not one but three of the adorable, humbug faced little creatures.

The place was Wales.  North Pembrokeshire to be exact, where myself and my husband had rented a small cottage on an isolated farm.  When I had booked the cottage several months previously, I vaguely recall there being mention on the website that badgers could sometimes be seen hanging around for scraps of food, but by the time we actually got there I had forgotten all about it.  A couple of nights into our stay and I was sitting on the small patio belonging to our cottage when suddenly a distinctive black and white face peered out of the undergrowth.  I kept very still indeed and slowly but surely the little chap climbed up onto the patio and began snuffling about.  When I stood up to go inside he darted back into the undergrowth but had no further hesitation about showing himself again when I returned and scattered a couple of slices of bread around the patio. 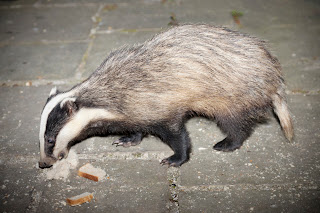 Thereafter it became a nightly ritual for the rest of our stay.  Every night at around 10 p.m., by the light of an almost full moon, not one but three badgers would climb onto the patio and await their free feast.  To be honest we weren't entirely sure what a badger's natural diet consisted of, but have since learned that this is mostly worms and bugs.  Even so, they seemed to enjoy bread, bread and jam, and even dog biscuits provided they were crunched up into small pieces.

I believe the three badgers were a family - a mother and her two cubs, the youngsters possibly being a few months old and not quite fully grown.  They weren't especially tame but at the same time not completely timid and would only dart back into the undergrowth if we made a sudden movement.  The flash from my camera didn't seem to bother them at all, but then I have since discovered that despite being nocturnal they have very poor eyesight.

I have to admit my knowledge of badgers was embarrassingly poor.  I knew they lived in tunnels known as setts and that they are nocturnal but that's about it.  When I asked my husband what animal family they belonged to he hazarded a guess at bear and they certainly have some bearlike characteristics, particularly their noses and long claws.  We were surprised then to learn that they are actually a member of the weasel family, which I suppose I can see when they have their long necks extended.  Confusingly, the males and females have pig's names (boar and sow) whilst their young, like bears, are known as cubs.

Badgers are believed to spread bovine tuberculosis and consequently a controversial cull has been recently undertaken in areas of Somerset and Gloucestershire.  Whilst out walking in the North Pembrokeshire countryside I got chatting to a farmer who told me that he was happy to report no such cull was planned for that area.  In spite of being a cattle farmer, he seemed to welcome the badgers and told me that he regularly encountered one old boar whose nightly range covered the entirety of his 400 acres.

As for the badgers on our patio last week, they didn't have to venture very far to get a nightly snack.  I'm pretty sure every occupant of this particular holiday cottage is delighted by their visits.  I just hope that in feeding them their regular diet and foraging ability isn't badly disrupted.

I'm so pleased to have had the privilege to be in such close proximity to these wonderful little animals.  A very rare and great pleasure indeed. 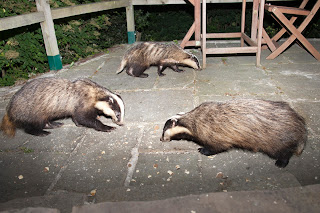