- October 28, 2013
I'm not normally blessed with good weather when I go on holiday.  The usual pattern seems to be that I set off, full of expectation for beautiful scenery and blue skies, only to spend the majority of the week under a blanket of grey with hardly a flicker of sunlight.  It's not that bad weather bothers me too much.  It is, after all, the only part of a holiday that can't be arranged.  It becomes significant though if, like me, you're hoping to get some good photos.

This year turned out to be the exception as we set off for our holiday in Pembrokeshire (South West Wales)  in the middle of  a heat wave.  In fact (and I hate to say this) at times it was almost too hot and sunny.

The county of Pembrokeshire is home to the only coastal National Park in the UK.  Some 186 miles of dramatic coastal scenery have been incorporated into the Pembrokeshire Coastal Path, a National Trail which can be enjoyed in short sections or as a complete long distance hike.  Our home for the week was a delightful little cottage nestled in a valley just a short distance from a particularly scenic stretch of the Coastal Path. 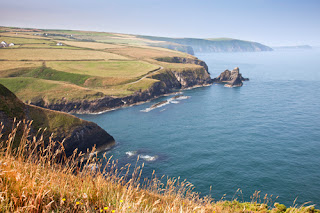 Departing from the door of our little coastal cottage, we could be onto the coastal path within 20 minutes from which point we could devise our own circular walks taking in the most breathtakingly beautiful sections of coastline which, to my mind, rivalled, if not bettered, anything I'd seen in Cornwall a couple of years earlier (although to be fair to Cornwall, most of that week we had less than favourable weather). 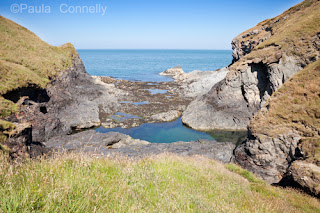 Before we'd set off on our holiday I'd been told that Pembrokeshire was "Cornwall without the crowds" and this was something that had particularly attracted me to the area.  It was still something of a surprise, however, to discover just how peaceful and quiet the area actually was.  We enjoyed mile after mile of wonderful coastal walking without passing another person.  We wondered if this could have been due to the heat wave and the fact that walking the coastal path entails a lot of ups and downs (not easy in temperatures of over 80 degrees), but a conversation with one of the few other people we encountered along the way confirmed that solitude was the norm.  "It's Cornwall without the crowds" the lady confirmed as we stopped to exchange pleasantries and let her pass us on the narrow path. 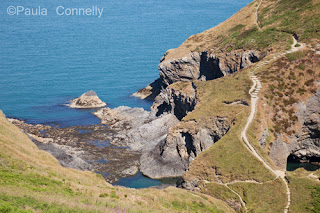 I would like to complete a long distance walk, but I don't think the Pembrokeshire Coastal Path would be my first choice.  There's no disputing the scenery along its entire length is spectacular and, with a total rise and fall of 35,000 feet, having completed it a walker would have climbed the equivalent of Everest!  What concerned me most whilst on the short sections I walked was the precarious nature of some sections of the path.  At times we found ourselves walking down a very steep incline towards a cliff face of around 500 feet with the path only turning away from a sheer drop at what seemed like the very last moment.  I was very unnerved  at times, even with dry conditions underfoot, but on a wet day, when the path becomes slippery with mud, such a walk would be too much like an ordeal for me. 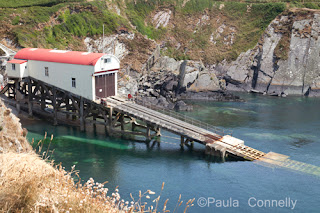 From May 2012 the Pembrokeshire Coastal Path became part of the 870 miles Wales Coast Path - the only footpath in the world to trace the coastline of an entire nation.
Away from the coast Pembrokeshire offers a contrasting walking experience in the beautiful and mysterious Preseli Hills, which will be the subject of Part 2 of my Pembrokeshire blog entry.