- December 03, 2013
I love my camera.  It doesn't quite go everywhere with me, but if I'm going on a walk I definitely want to take it along.  This isn't just so that I can take images to use in my blog, although since I began blogging earlier in the year I have been taking even more photos than usual.  The main reason I want my camera along though is because I make a portion of my income from the sale of stock images and so it's important that I never miss a shot.


As a semi-professional photographer I have a good DSLR camera with an excellent set of lenses.  My camera body is the Canon EOS 5D Mark II and my main "walk-about" lens of choice is the 24-105 L series.  This might not mean anything to any non-photographer readers of my blog, but to put it simply it's a bit of a beast, weighing in at approximately 4lbs.  When that's added to everything else I carry in my rucksack (drinks, waterproofs, etc) it makes for quite a heavy load.  I've certainly felt the strain at the end of a long walk or mountain climb. 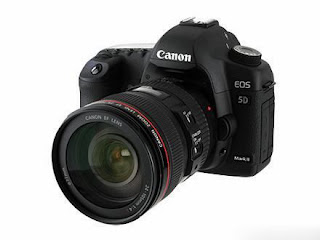 Canon EOS 5D Mark II with 24-105mm L series lens
As my walking has increased in terms of distance and strenuousness, I've also discovered a few other problems associated with transporting my camera gear and getting good shots.  First of all, even if the sky is overcast and the lighting less than ideal when I've set off on a walk, this isn't to say the conditions won't improve as the day progresses.  So as tempting as it may be to leave the camera behind on such days, I've invariably wound up kicking myself as the sun has come out or a particularly beautiful scene has emerged which I've only been able to capture on my iphone.  Then on other days my camera has been with me for the whole walk but has hardly left the rucksack.   Even when I have the camera with me, carrying it out of the rucksack wasn't an option for several reasons.  The weight of it means that carrying it round my neck with the neckstrap is just too uncomfortable.  Also this can be hazardous to the camera as it swings about whilst I'm negotiating a climb over rocks, for example.  So for these reasons I have been carrying the camera within a padded case within my rucksack for the entirety of my walks.  Then, when I have needed to use it, I have to stop, remove my rucksack, take the camera out of its case, take my shots, replace it and put my rucksack back on.  All of this has added a considerable amount of time to any of my walks.


Once I began to climb mountains (starting with Pen-y-Ghent back in August) I started to consider the possibility of buying a compact camera just for lengthy or mountainous walks.  This is something I will write a blog about later, but in the first instance the solution I came up with is the Think Tank Camera Support Strap system, shown below. 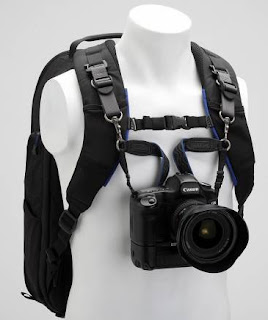 
This system consists of a pair of short straps which affix to the camera's neck strap with two strong metal hooks.  The two straps can then be locked onto the front of a rucksack's shoulder straps by means to two plastic locks, thereby enabling the camera to be worn from the rucksack, as shown above.  The only downside to this was that the Canon EOS neckstrap doesn't have suitable metal loops through which to affix the Think Tank support straps and in order for the system to work I also had to purchase a Think Tank neckstrap as well.  In total the whole system cost me just over £30. 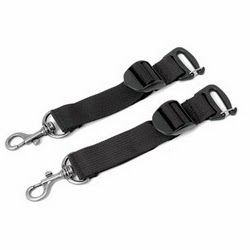 
At the time of writing I have had this set-up for just over a couple of months and have undertaken several walks where I've been able to carry my camera from my rucksack's shoulder straps for the entire length of my walk.  The furthest distance I've walked whilst carrying my camera this way has been 12 miles and I can happily report it was very comfortable indeed, with the added advantage of my camera being easily to hand at all times.


The only time I have not carried my camera via the Think Tank system has been when climbing a mountain which involved a scramble up a rock face.  On that occasion I chose to leave the camera behind, much to my regret when I missed some wonderful views in beautiful lighting.  It was at that point that I began to seriously consider purchasing a smaller camera purely for walks.


And so my search for a suitable small camera began, but this will be the subject of a future blog.
Reviews