- December 18, 2013
Day two of our short stay in the Lake District started with a dilemma.  I had set out on our weekend break with the intention of climbing one of the larger mountains for which the Lake District is famous.  My preferred mountain of choice was Great Gable (2,949 feet), with the intention of ascending from Seathwaite in Borrowdale.  However, as our accommodation for the weekend was located in the village of Braithwaite, at the foot of Grisedale Pike, this slightly smaller mountain was held in reserve.


As it turned out, day two dawned with overcast skies and looking down towards the direction of Great Gable, through Borrowdale and beyond, we could see the clouds were hanging heavily over the mountain tops, meaning the majority of any climb would be undertaken in damp conditions with poor visibility.   Whilst I didn’t mind this so much, I remembered our recent ascent of Skiddaw in similar conditions.  Although this climb had been highly enjoyable, it was nevertheless a bit disappointing to have missed out on some truly spectacular views.  A glance towards Grisedale Pike showed very little cloud cover on the summit and so our mind was made up for us.  The car could have a rest and we would start our walk straight from the doorstep!


Before we set off, however, I found myself faced with a second dilemma.  Should I take my camera?  Readers of my previous blog entries will know that I had struggled to carry my Canon DSLR on long walks and had recently invested in a set of straps by Think Tank, enabling me to carry the camera from my rucksack’s shoulder straps.  Unfortunately though, this method of carrying a camera just wasn’t advisable for steep mountain climbing which invariably entailed a scramble up a rock face on certain sections.  As the weather seemed less than ideal for photographs, I therefore took the decision to leave the DSLR behind and rely purely on my iphone’s in-built camera.  This, it turned out, was a decision I later regretted and marked the beginning of my quest for a smaller, lightweight camera….which is to be the subject of a future blog entry.


At 2,595 feet (791 metres), Grisedale Pike is situated just over four miles west of the popular Lake District town of Keswick and one of the most popular routes of ascent is from the village of Braithwaite, our base for the weekend.  There was therefore a very well-defined path from a small wood called Hospital Plantation which climbed steeply up the eastern side of the mountain.  Very soon we were able to look down upon the white-painted houses of Braithwaite and beyond to Keswick and the shores of Derewentwater. 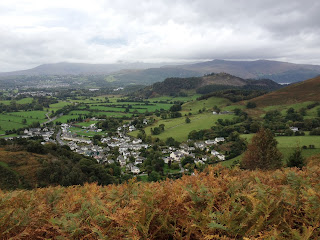 Braithwaite from the ascent of Grisedale Pike
The path then levelled out for a while, which made for a very pleasant (and easier) walk, before once again the gradient increased.  Ahead I could make out the path on a ridge at the eastern side of the mountain.  It looked very steep indeed with a steep drop at either side and I approached this, the final section of the climb with some trepidation. 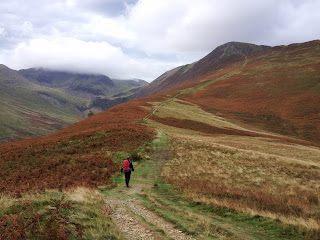 Approaching the final climb to the summit
There was a little bit of a scramble up this rocky ridge which I found to be made difficult by the sheer weight of my rucksack pressing me down to the extent that at one point I actually needed assistance to get off the rock and stand upright.  Having completed the “proper” climb though, the summit was soon reached with that marvellous sense of accomplishment that I have only experienced once before, on the summit of Skiddaw.  It was truly exhilarating!


Although it was still heavily overcast, the view from the summit of Grisedale Pike was nonetheless magnificent. 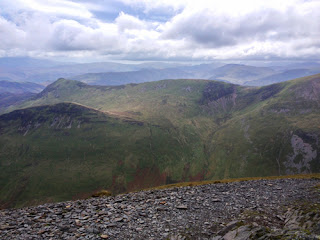 View from the summit looking south
As with most Lakeland walks, we soon found ourselves with company as a small group of walkers reached the summit shortly after us, and one of their party kindly took a photo with my phone of Tom and I together. 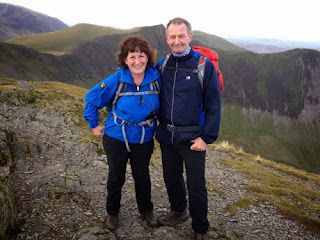 Another Wainwright conquered!
I was at this point a bit disappointed not to have my DSLR with me, but I still managed a few shots of the view over towards our next destination and second Wainwright of the day, the nearby Hopegill Head (2,526 feet). 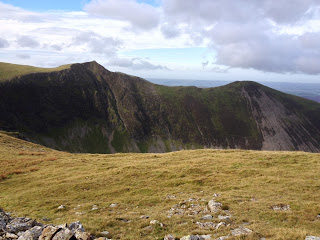 
From Grisedale Pike the walk to Hopegill Head was fairly easy, with a little descent in the first instance and then further ascent to the summit. 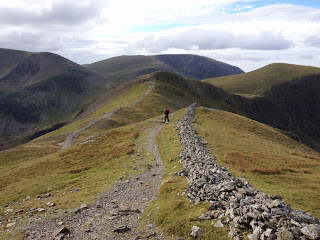 The path between Grisedale Pike and Hopegill Head
Once there I also took some photos looking back to Grisedale Pike.  It was truly stunning.  How I wished I’d had my Canon with me! 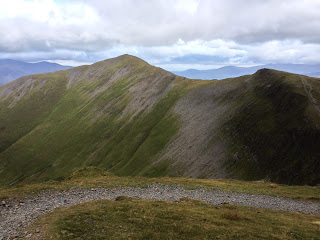 Grisedale Pike viewed from Hopegill Head
The descent was equally enjoyable and, thankfully, a lot gentler than the climb up, leading off the ridge known as Coledale Hause, between Hopegill Head and Eel Crag.  The path down passed waterfalls, crossed streams and offered excellent views upwards to the ridge we’d just traversed. 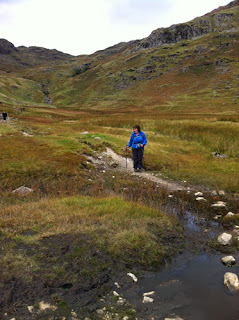 On the descent
It also took us within sight of Force Crag Mine, the last working lead mine in the Lake District which closed in 1990 following a major collapse.  Eventually the stony path down joined the road to the mine which left us with a couple of miles of easy walking on the level before emerging back in the village of Braithwaite – conveniently outside the excellent Royal Oak pub where I celebrated my eighth Wainwright to date!
This had been a wonderful walk and had quite possibly earned Grisedale Pike the accolade of being my favourite mountain so far, with lots left to explore including, of course, Great Gable.