- December 13, 2013
I have wanted to climb a Lake District mountain for as long as I can remember.  Until September this year, however, it had been one of those ambitions I just hadn’t worked hard enough to achieve.  There was always an excuse.  I wasn’t fit enough.  I didn’t have time to prepare.  The weather in the Lake District is too unpredictable (it is a bit of a watershed).  Other holiday destinations took precedence.  Excuse after excuse!  I mention this to highlight just how much my climb of Skiddaw meant to me.  It was hard work and it was wonderful.  And it left me wanting more.  Which is why, just three weeks later, I found myself on the road at 6 a.m., driving westwards towards the Lake District again.


This time I had several peaks in mind.  I didn’t intend climbing all of them, but had decided to leave my final decision as to which of them I would tackle until we arrived in Lakeland.  The weather forecast was promising, but I realised that where the Lake District is concerned forecasts can never be entirely relied upon.  As the sun began to rise and we turned onto the A66 from Scotch Corner to Penrith, all I knew for sure was that I would like to bag at least a couple of Wainwrights.


Perhaps not all readers of my blog will be familiar with the work of Alfred Wainwright, although certainly there has been plenty written about him.  Born in Blackburn, Lancashire in 1907, Wainwright (who became affectionately known to his followers as simply ‘AW’) was a fellwalker, author and illustrator whose seven volume “Pictorial Guide to the Lakeland Fells” has become the standard reference to 214 of the fells of the English Lake District.  Wainwright’s name is now synonymous with the Lake District and bagging all 214 “Wainwrights” has become something of an obsession for many walkers.  On my previous trip to the Lakes I bought myself an illustrated map showing all 214 Wainwrights along with a little chart which can be ticked and dated as each of the peaks is conquered.  Upon studying the map I was pleased to find that I had already bagged myself three Wainwrights – Skiddaw, Walla Crag and Catbells.  That just left 211 to go! 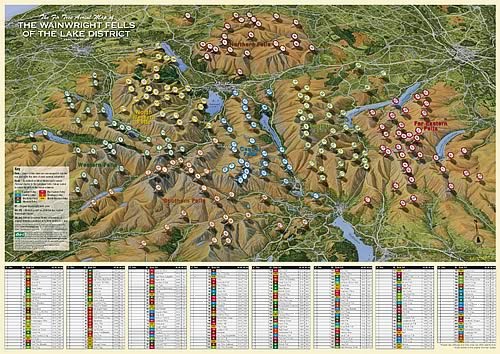 Map of Wainwright Fells
The village of Grasmere was our arrival point at just before 9 a.m. on this overcast October morning.   It was surprising to find the main village car park was empty!  Grasmere is not only a beautiful little Lakeland village, it is also the final resting place of the poet William Wordsworth and therefore a bustling tourist trap all year round.  Having changed into our walking gear we headed through its narrow streets just as the cafes and gift shops were opening their doors and the first of the tourists were emerging from their hotels and guesthouses.  We were heading off to climb the hills above Grasmere, starting with Helm Crag. 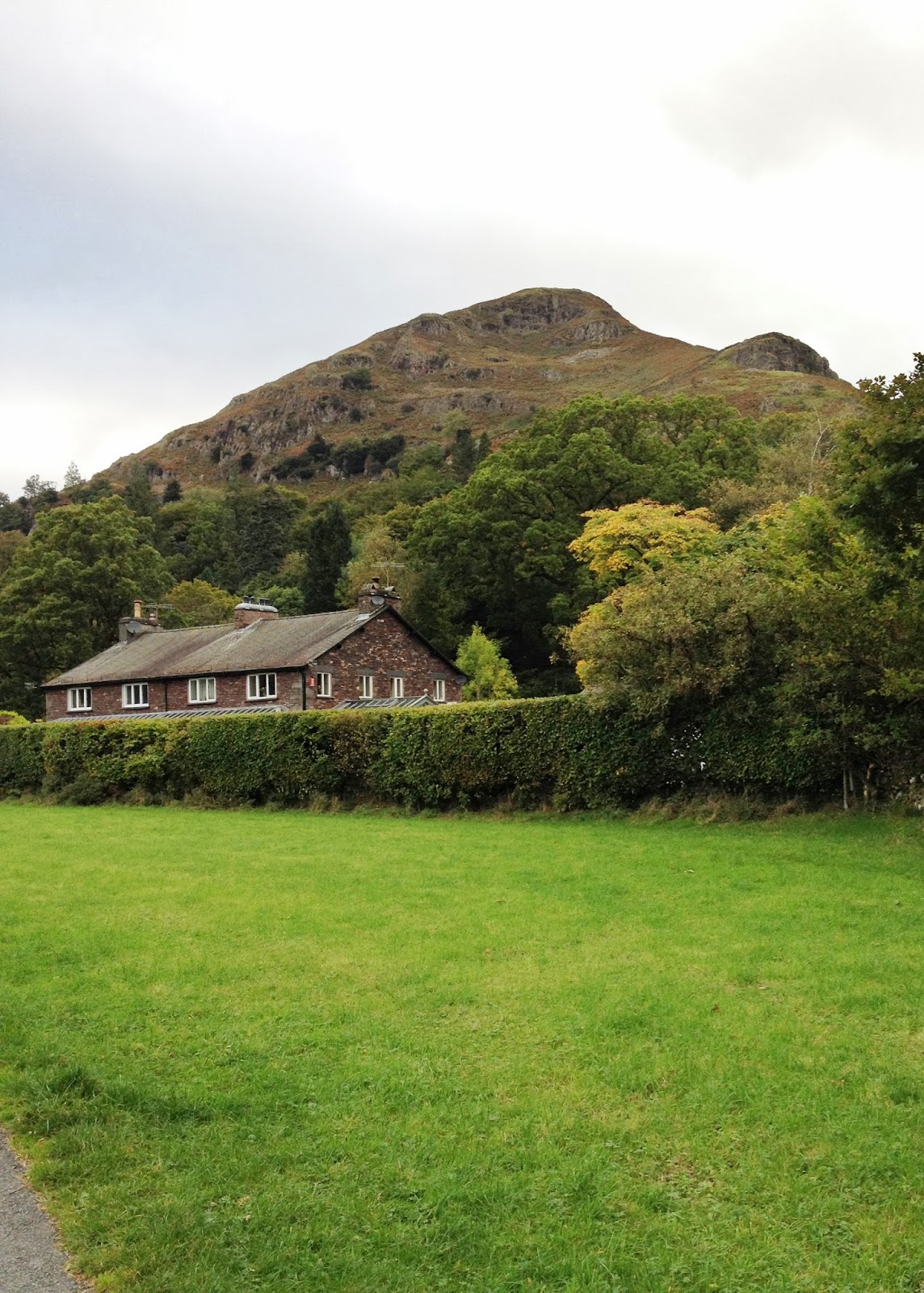 
As we walked out of the village to the foot of Helm Crag it was difficult to make out the rock formations on the summit which give the crag its nickname “The Lion and the Lamb” (apparently from Grasmere the rocks look like a lion and a lamb sitting side by side on the summit). 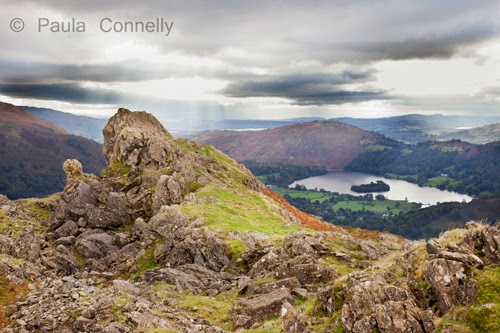 The Lion and the Lamb - Helm Crag


At just 1,329 feet (405 meters), Helm Crag isn’t a mountain but its distinctive summit makes it one of the most recognised hills in the Lake District.  On climbing Helm Crag, Wainwright wrote “It gives an exhilarating little climb, a brief essay in real mountaineering”.  As we walked along the lane towards the foot of the hill it looked a lot higher than 1,329 feet to me, although in fact it turned out to be a steady and highly enjoyable ascent to a summit with spectacular views in all directions – looking over the Langdale Pikes, the Coniston Fells and the Helvellyn range. 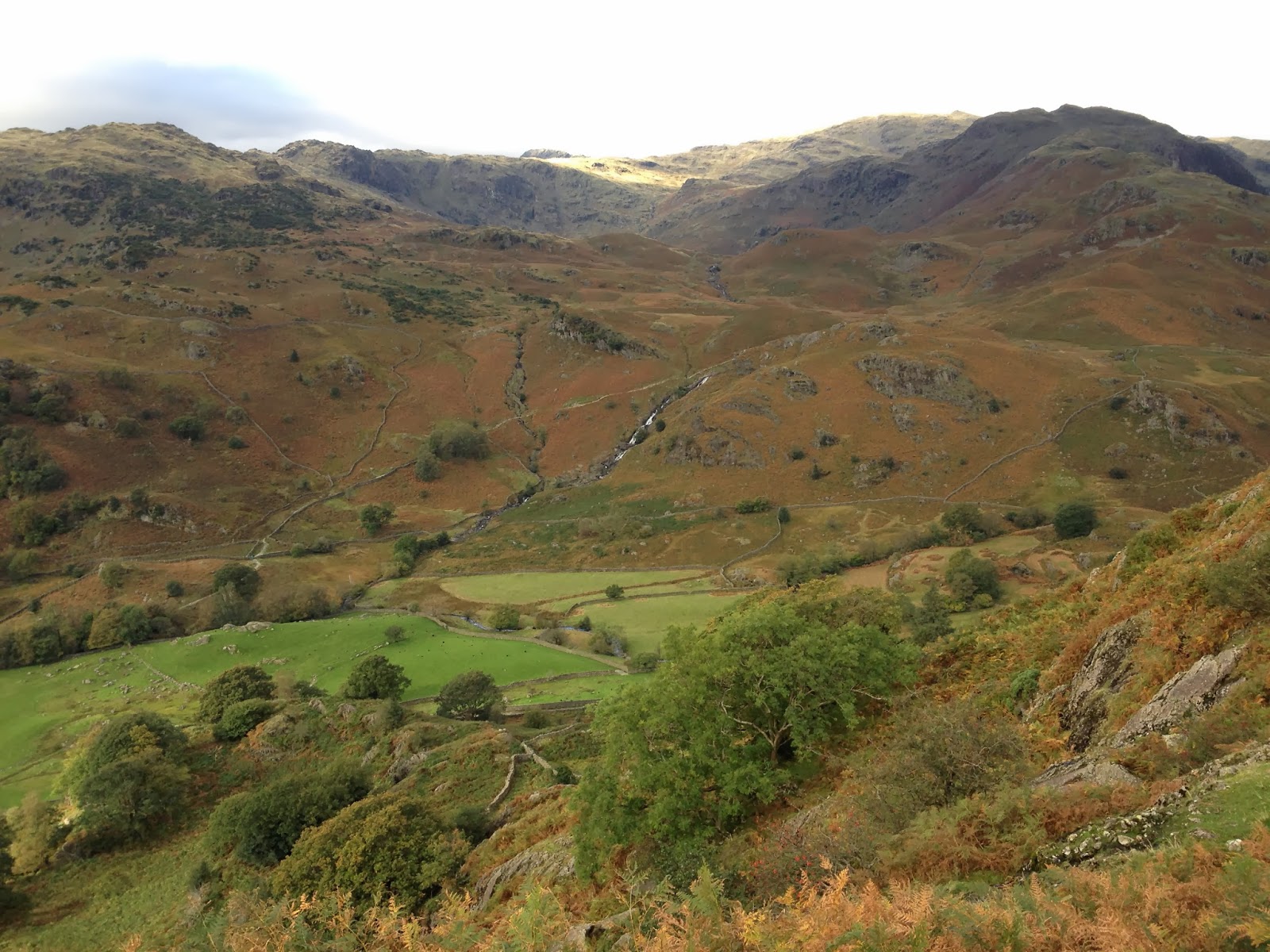 Looking west from the top of Helm Crag
The true summit of Helm Crag is another rock formation known as “The Howitzer”, a name given due to its artillery-like appearance from below.  We rested here a while and ate our sandwiches, all the while watching a steady stream of people making their way along the ridge.  It was beginning to get pretty crowded up there! 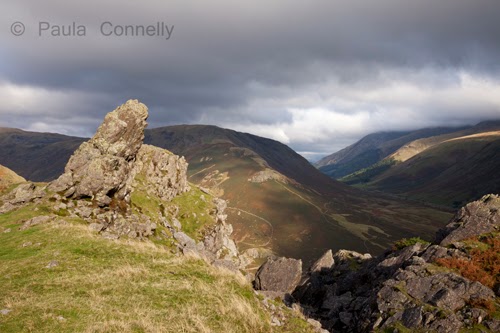 
From the summit of Helm Crag our walk took us along the ridge, thereby bagging two further Wainwrights in the process – Calf Crag (1,762 feet) and Gibson Knott (1,385 feet) (three in one day!) before descending into Easedale and following the Easedale Beck into Grasmere again. 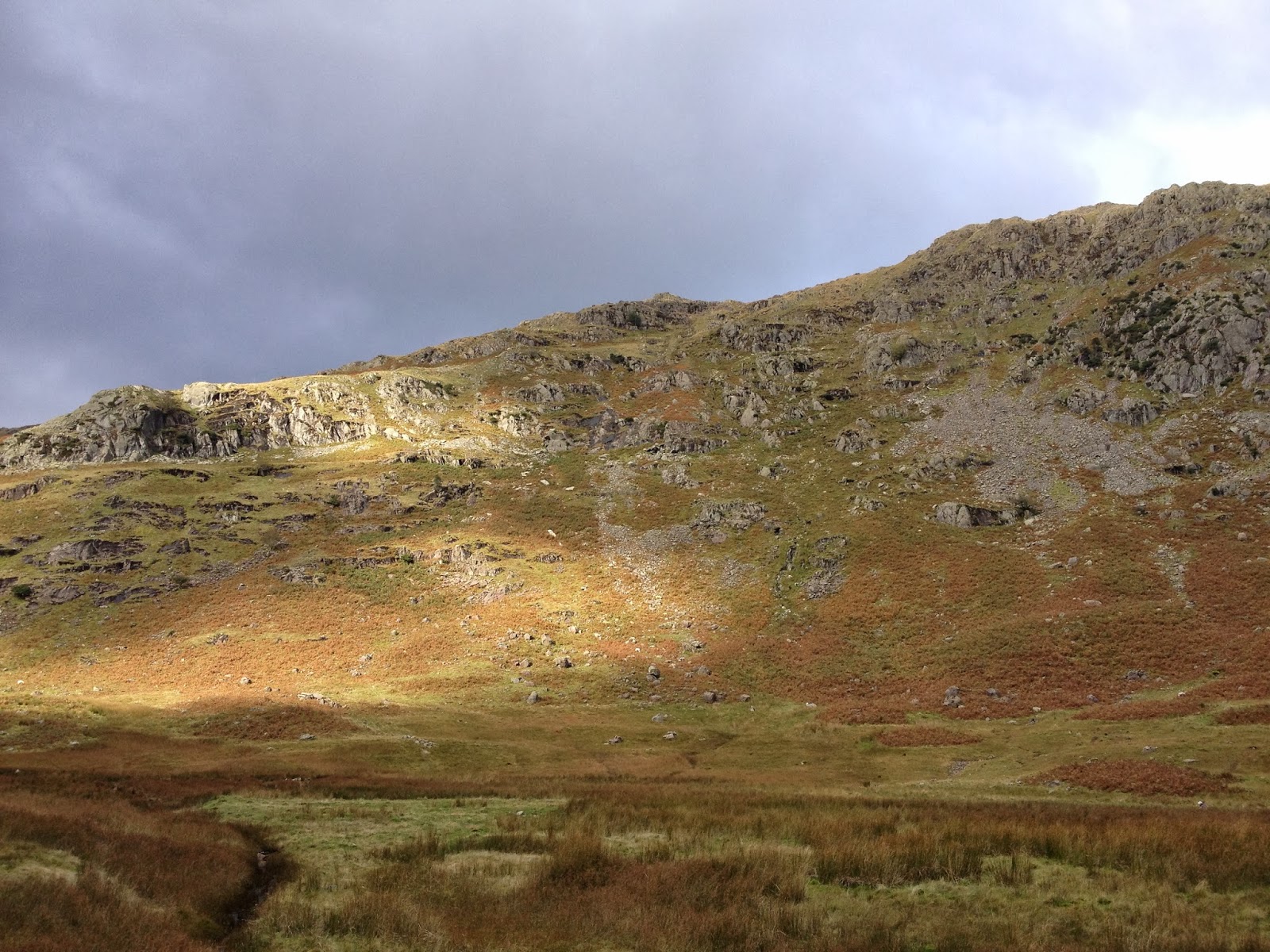 Easedale
The walk hadn’t taken quite as long as I had thought and so it was nice to have time to hit a few of Grasmere’s little shops and enjoy coffee and cake in one of the many cafes.  By this time of day Grasmere was teeming with people and the car park where we’d left our car was full to capacity.  It was time to leave and head north to Keswick, to check into our accommodation and figure out just which of those true mountains (2,000 feet+) we were going to tackle the following day.  But this will be the subject of my next blog entry.
Lake District