As 2013 drew to a close I realised I had unfinished business in the Yorkshire Dales.  There was one of Yorkshire's Three Peaks which I had yet to climb.  The highest of the three - Whernside.


The idea of climbing all three in the same year appealed to me and so I decided to waste no further time.  As the weather forecast for the second weekend in November seemed reasonably favourable, we headed west again, initially to the Wensleydale village of Hawes.  Although we could have easily driven directly to Whernside, climbed the mountain and driven home again in the same day, the chance to spend a little longer in the Yorkshire Dales is one we’d seldom pass by.  And Hawes is home to two of our favourite places to visit in the Dales – the Wensleydale Creamery and the Wensleydale Pantry.  The “Pantry” is a little restaurant in Hawes which offers the most comprehensive menu I’ve ever seen, from cooked breakfasts to curries, steak dinners, pasta, cakes, pastries – just about anything you can imagine.  We are particularly fond of their cooked breakfasts, so a very early start landed us on their doorstep just after they had first opened.  Suitably stuffed with a “full English” we then made our way to the "Creamery", home of the famous Wensleydale cheese.  Here you can taste all the many varieties of Wensleydale, such as cranberry, ginger or even blue Wensleydale.  Even after a full breakfast, there’s always room to taste as many samples as possible before shopping for our favourites!


From Wensleydale it was just a short drive to the village of Dent, which is actually just over the border into Cumbria.  I wanted to stay the night here at the George and Dragon – a pub with its very own brewery.  I also planned to warm up for the Whernside climb with a walk around the beautiful Dentdale. Having checked into the pub though and sampled a glass of their ale by the roaring log fire, a walk began to seem less likely.  Even so, we stole ourselves away and headed off along the banks of the River Dee in crisp autumn sunshine.  Sadly, the sunny weather did not stay with us for very long and, as we began to climb up away from the river, we could see an ominous cloud rolling in along the valley.  No sooner had we put on our waterproof gear than the cloud had caught us up, engulfing us in a very sharp hailstorm with thunder rumbling over the hilltops.  This was all the excuse we needed to return to that cosy fireside and tasty beer.    And there we stayed for the rest of the afternoon and evening. 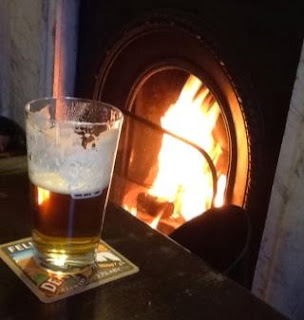 
Today Dent is in Cumbria, although it is within the boundaries of the Yorkshire Dales National Park and historically was part of the West Riding of Yorkshire.  It’s a very beautiful little village and its main street is very narrow and cobbled.  Watching tractors rumbling along here was quite a sight, particularly if one met a car coming in the opposite direction. 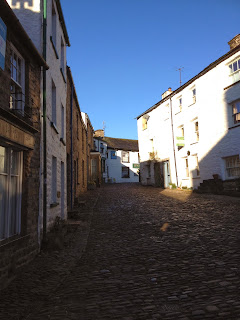 The main road through Dent


We awoke on Sunday morning in Dent to find that there had been a very hard frost overnight.  After a massive breakfast we headed off to the Ribblehead Viaduct, the starting point for our ascent of Whernside.  As we approached we could see that the top of the mountain was white with snow, as were many of the surrounding hills.  The sky was clear and the sun was shining brightly, and having wrapped up well the conditions were actually perfect for a climb. 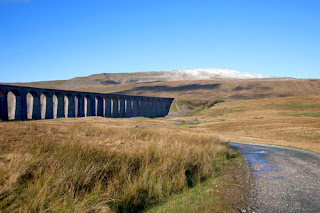 Whernside and the Ribblehead Viaduct


Ribblehead is the longest viaduct on the Settle to Carlisle Line.  Built between 1870 and 1874, the construction was undertaken by thousands of navvies who established homes for themselves and their families in shanty towns which they built on the surrounding moorland.  Over 100 navvies lost their lives building the viaduct, which measures 440 yards in length and 104 feet high.  The Settle to Carlisle Line is one of the most beautiful stretches of railway in the UK and in the 1980s there were plans to close it down which thankfully failed.  Leaving our car in the roadside car park by the viaduct, we set off along our route which to begin with followed the course of the railway, eventually crossing the line at Blea Moor Tunnel. 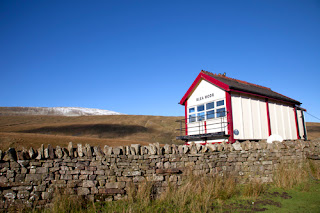 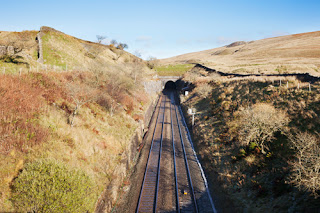 
Having crossed the railway at Blea Moor our ascent of Whernside began in earnest.  Just like Pen-y-Ghent and Ingleborough, the path up Whernside was very nicely maintained and paved which not only helps walkers to navigate their route to the top but also controls erosion from all those walking boots.  However, on this particular day those paving slabs and steps were glazed with sheets of ice, making them treacherously slippery and to be avoided if possible.  Slipping hazards aside though, the ascent of Whernside was actually very straightforward and easy.  It may be the highest of the Three Peaks, but it is without a doubt the easiest. 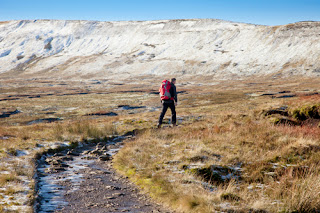 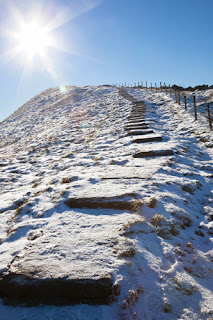 Snow covered steps near the summit of Whernside


Reaching the summit of a hill or mountain gives me a real sense of achievement and happiness.  Somehow the snow at the top of Whernside, albeit a mere dusting, amplified that sense of wellbeing.  It was magical!  The views all around were stunning.  Close by were the now familiar peaks of Pen-y-Ghent and Ingleborough, just below the summit was the very cold looking yet beautiful Greensett Tarn and over to the west I could see the mountains of the Lake District silhouetted on the horizon. 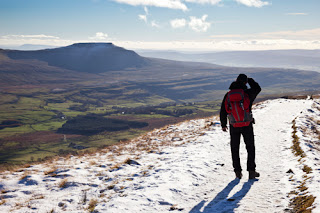 Looking towards Ingleborough from the summit of Whernside
After posing by the summit's trig point (it was Remembrance Sunday, and someone had thoughtfully placed a single poppy on the stone), it was time to make our descent back to Ribblehead. 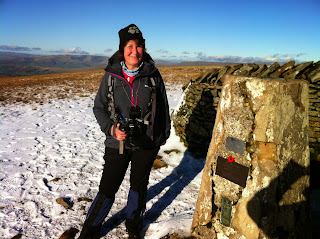 On the summit of Whernside


Luckily for us our descent of Whernside was on the sunny side of the mountain and so any ice and snow had quickly melted away, making the steep path down much easier to negotiate.   The sun was shining brightly and it very quickly became too warm for all the layers of clothing we'd needed on the summit.  A walk of approximately three miles took us back to the viaduct and our car. 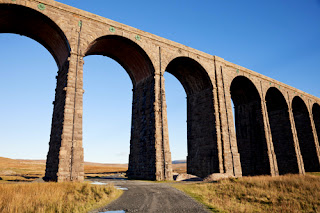 
As we enjoyed a well earned beer in the pub which sits by the viaduct (the Station Inn), I felt reasonably satisfied to have now completed my own Three Peaks Challenge.  But at the same time this did leave me asking myself the question: can I complete all three in one go?  That's all there mountains and a total of 25 miles in under 12 hours?   I guess I'll just have to give it a try.
at 07:49