- February 17, 2014
February already!  The second month of the year and only our second "proper" walk.  I'd hoped to have done at least a couple more by now, but although I don't mind walking in bad weather, I have a tendency to stay at home if the forecast is bad.  When deciding to walk in the Yorkshire Wolds this time we took two factors into consideration.  First of all, we thought the ground might be firmer under foot.  There'd been a lot of rain and whilst a certain amount of mud is inevitable, it's not much fun slipping and sliding for mile after mile.  And secondly we thought a bit of a "Wolds Way Warm-up" was in order.

I'm becoming a bit better acquainted with my Garmin GPS and the associated "Base Camp" software, and so for this walk I plotted out my own circular route of around ten miles, starting and finishing in the East Yorkshire market town of Pocklington.

We parked in the centre of Pocklington and then headed eastwards, along Kilnwick Road, turning left on Target Lane (where there's a public footpath sign), past some newly built houses and along a footpath which eventually turns into a track and leads uphill.  Turning back gave us a good view of the town and All Saints Church (near where we'd parked). 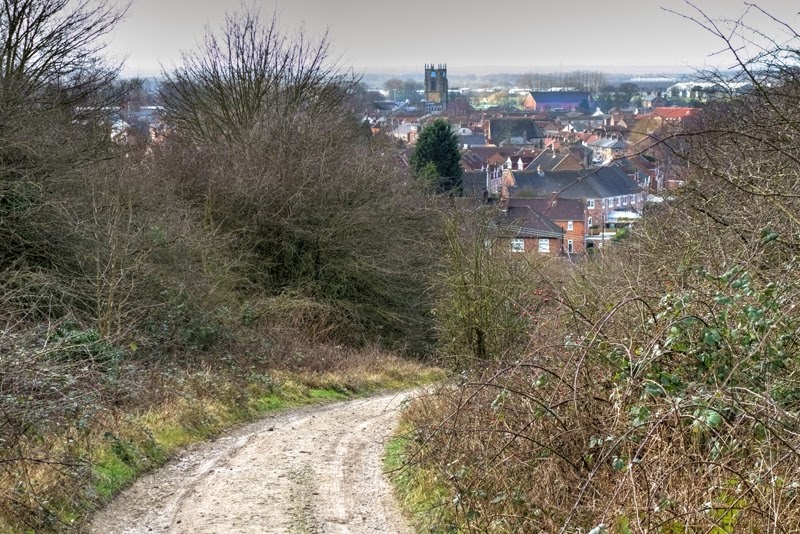 Looking back over Pocklington

At the top of the hill, in a field by a radio transmitter, we encountered a little group of ponies and a donkey, munching on some freshly delivered hay in a field devoid of greenery.  A small sample of some of the mud that awaited us, just round the corner! 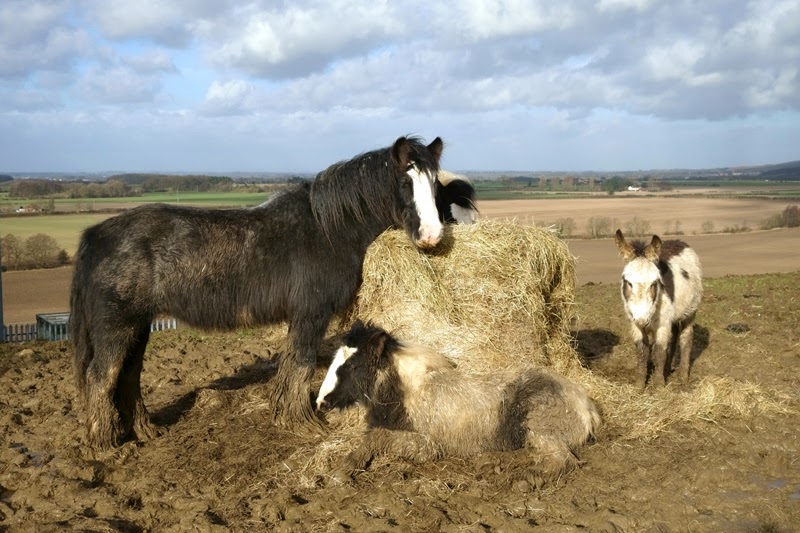 From this point we went through a gate and into Pocklington Woods, following the path on the edge of a golf course before emerging onto a lane which winds its way downhill to join the road, where we turned right walking ahead for a short distance to a footpath sign across the road which directed us into a field.  This path was grassy and clearly defined to begin with, but after a couple of fields we crossed a lane to take a path towards more woodland.  The path across this field wasn't too clearly marked.  It was simply a case of following the tyre marks across the mud! 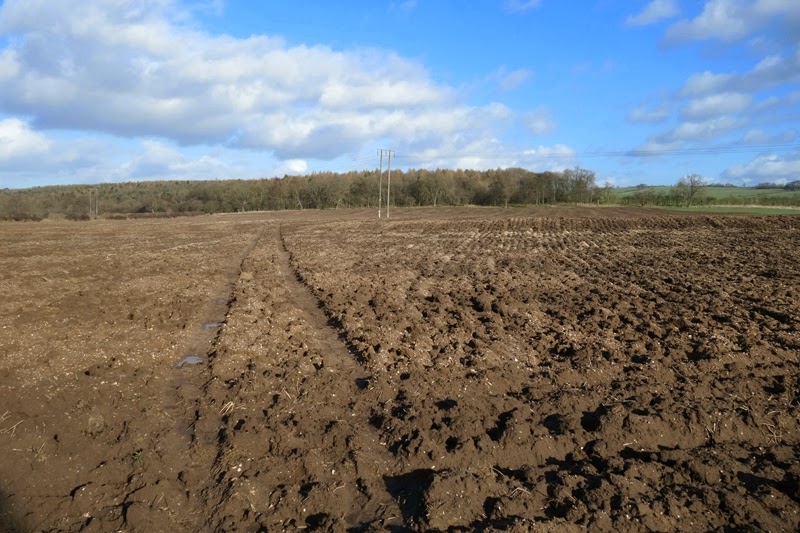 There's a path across there somewhere

My route then led us through Grimthorpe Wood and out the other side where we turned left to walk along field edges, following the route of the Chalkland Way to the little hamlet of Great Givendale.  This is the first time I had heard of the Chalkland Way, a forty mile circular route devised in 1994 and linking the Wolds villages of Great Givendale, Bishop Wilton, Bugthorpe, Thixendale, Fimber, Wetwang and Huggate.  A free leaflet is available from the East Yorkshire and Derwent Ramblers and more information can be obtained on their website.

After all the mud of the past few miles, we were pleased to emerge onto a country lane and stamp our boots on firm ground before heading towards the very beautiful Great Givendale and its lovely little church.  The sun was out and the wind had eased, making it a very pleasant afternoon. 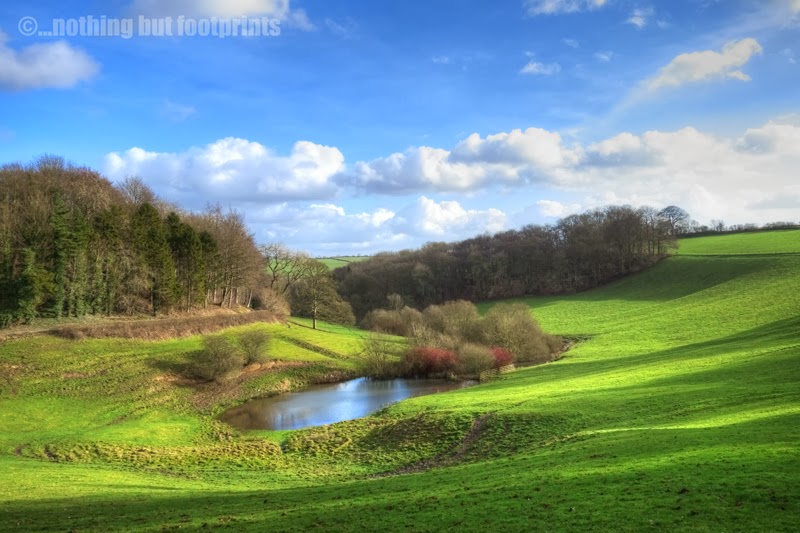 The little church of St Ethelburga was rebuilt in 1849 on the site of a much earlier, 12th century church.  Regular readers of my blog may recognise the name Ethelburga from my last walk.  Daughter of Saint Aethelbert, the first Christian king of Kent, in AD 625 Ethelburga married King Edwin of Northumbria.  After his death at the Battle of Hatfield, Queen Ethelburga escaped by sea to Kent where she became the first Anglo-Saxon queen to take the veil, living the remainder of her life as Abbess of Lyming. 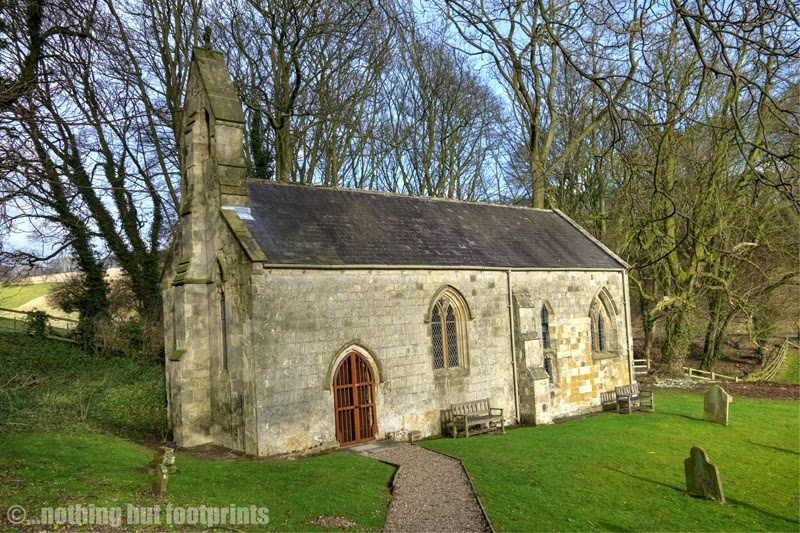 I was fortunate that the sun was still shining and very grateful to the couple who were sitting on the bench in front of the church to eat their packed lunch as they momentarily hid round the corner to allow me to take a photo.  I was a little dubious about going into the church, even though most of the mud on my boots had been stomped off, but the lady said "Go on in.  They won't mind".  I'm not sure who exactly "they" were, and how she knew this, but I took a chance and cautiously  made my way inside to take a quick interior shot.  On this occasion, leaving "nothing but footprints" wouldn't have been appropriate and, thankfully, a couple of pounds for a guide book was all I left behind! 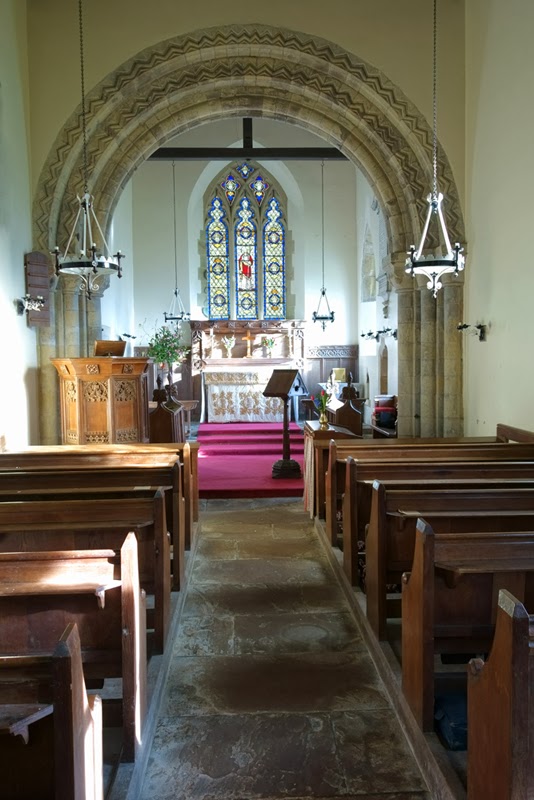 From Great Givendale we took the bridleway behind the church and headed off in the direction of Little Givendale (a farm), leaving the bridleway after a gated bridge and climbing uphill through a group of trees.  From this vantage point we had a lovely view of the route we'd just taken along the valley bottom. 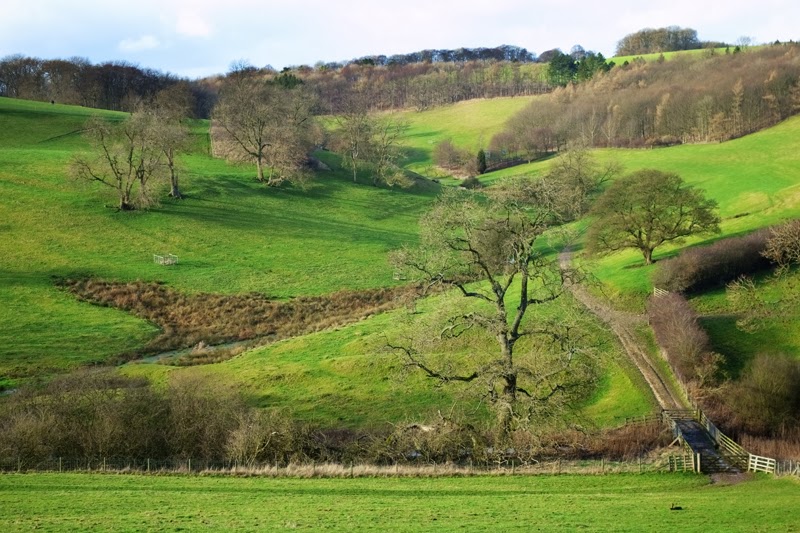 After climbing the hill we turned right onto a farm track which took us through Little Givendale and to a crossroads where we continued straight on to a road called The Balk.  This took us downhill to the lovely village of Millington where, according to their welcome sign, they really want you to hang around for as long as possible (either that or there's some particularly nasty torture going on - I hope it's the former)! 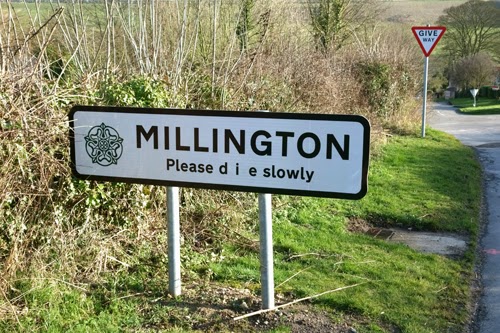 Millington can offer the walker a choice of refreshment, either at the charming Rambler's Rest Tearooms (which also provides accommodation), or at the village pub, The Gait Inn, which is where we decided to have a break.  Fortunately, given the state of our boots, it was a nice enough day to sit and enjoy a drink at one of their outdoor tables. 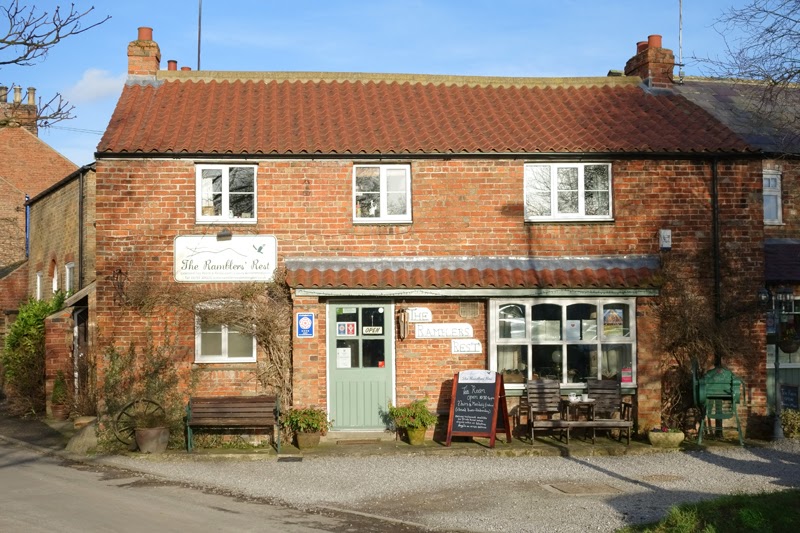 From the centre of Millington we retraced our steps for a short distance, following signs for the Chalkland Way uphill steeply to join the Wolds Way which passes along the ridge to the south east of the village. 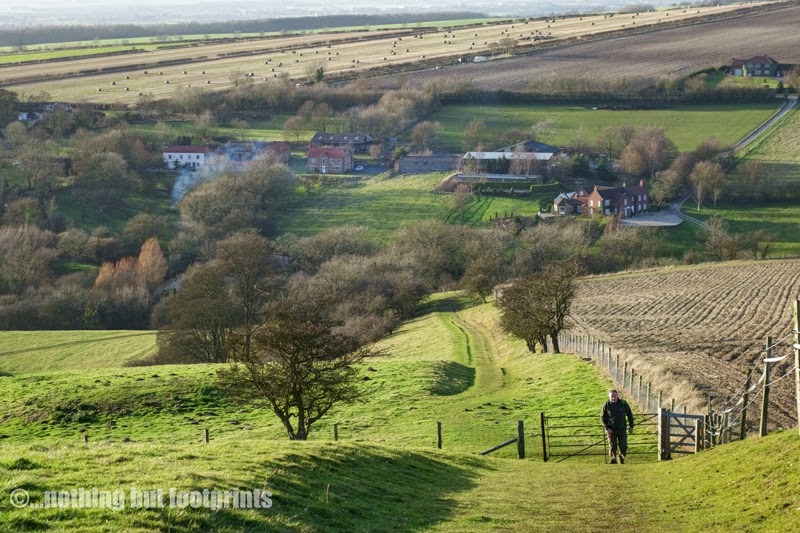 Steep climb out of Millington

As we climbed up the hill the views opened up across typical Yorkshire Wolds scenery of undulating farmland. 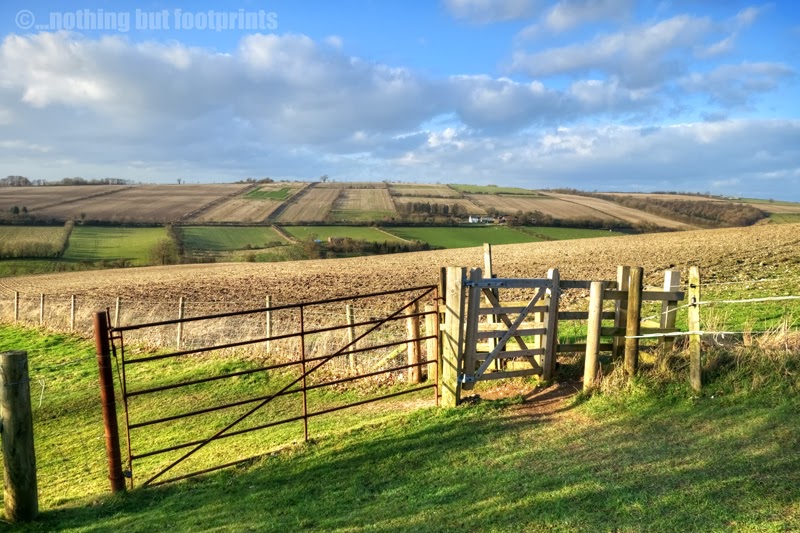 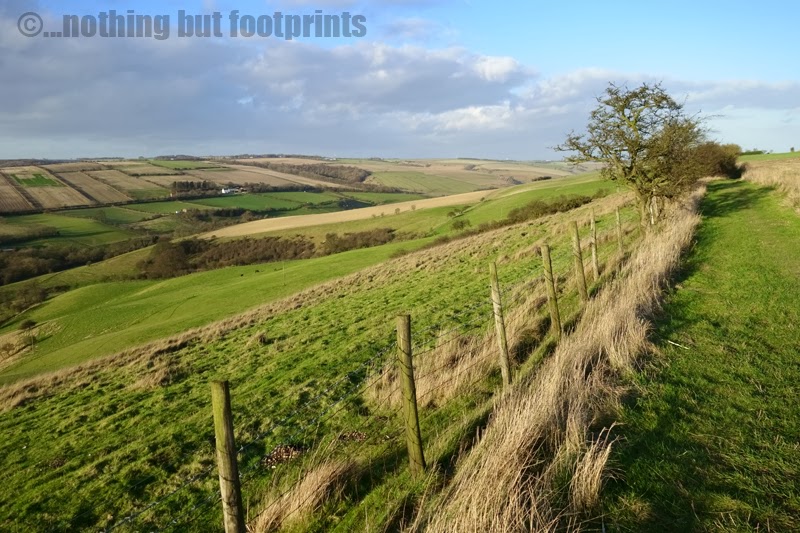 On the Wolds Way above Millington

We followed the route of the Wolds Way back downhill and onto a lane which took us to the golf club at Kilnwick Percy, which is where we left the national trail and joined a public footpath which, rather ominously, cuts right across the fairway.  It was quite late in the afternoon by now and, thankfully, all the golfers had retired to the clubhouse, otherwise I think this path may have left me a little on edge! 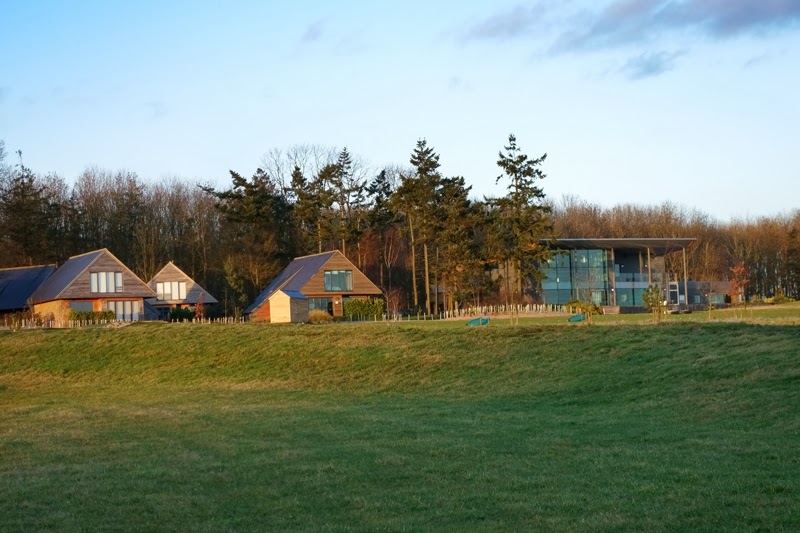 The path eventually left the golf course and led us back down into the town of Pocklington, just as the sun was going down on a most enjoyable afternoon.  This path emerges into a residential area and a left turn here took us back to Kilnwick Road and a short walk back to the town centre.

I'm adding a rough outline of our walk below and, as always, I'm happy to provide extra information or answer questions.  You can also get updates on my blog and other walking related subjects by liking my Facebook page. 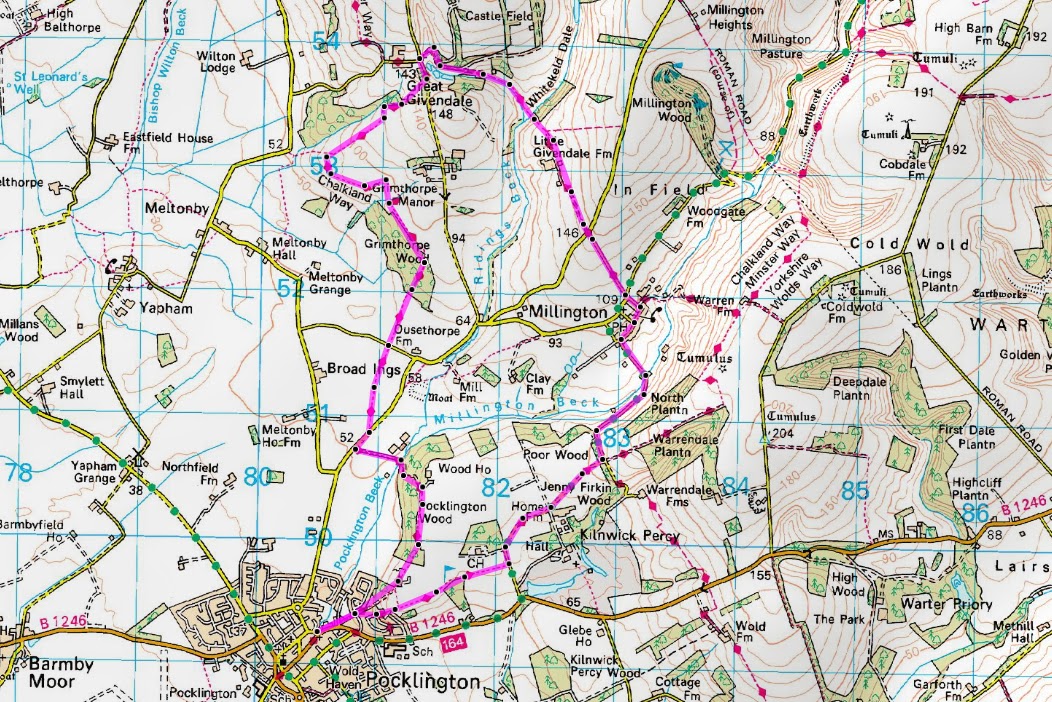