- March 26, 2014
Just a few days after returning from our weekend in the Yorkshire Dales I began to think about a return visit.  Like many, I suspect, the Yorkshire Dales has that kind of effect on me.  A quick check through my diary soon had me frowning though.  Weekend after weekend had some kind of work or family commitment inked in.  Except, that is, the very next weekend which was tantalisingly free.  Those two blank pages taunted me.  But not for long.  A quick search on good old Trip Advisor and one phone call later we had booked accommodation  in the lovely little Swaledale village of Reeth.  The weather forecast didn't look too bad and I was keen to explore some of the area's distinctive industrial history.

The village of Reeth is situated 11 miles to the west of Richmond and is considered to be the main settlement in Upper Swaledale.  It's also located on the highly popular Coast to Coast Walk, which is perhaps why a such a small place has need of no fewer than three pubs and one hotel, not to mention various bed and breakfast establishments.  Our base for the weekend was the Kings Arms Hotel, a traditional Dales pub overlooking the village green.  On arrival we gave it a quick once over and sampled a pint of Theakston's Old Peculier before setting off on a fairly short circular walk of 8 miles, to discover the valley of Arkengarthdale. 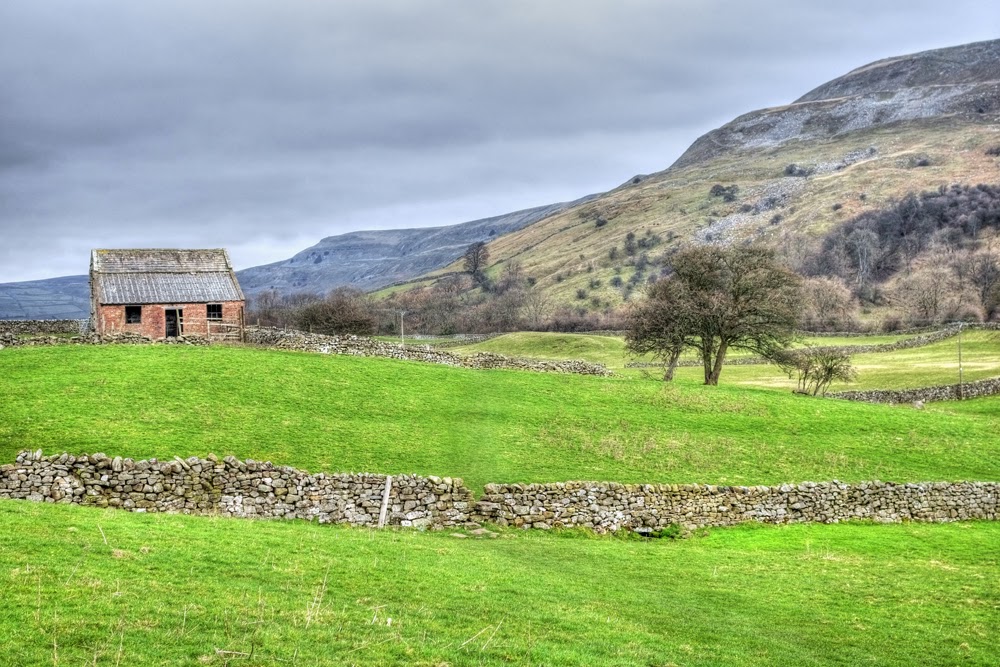 Arkengarthdale.  It sounds almost Scandinavian.  And that's because its name is derived from the old Norse word for a yard "Garth",  which belonged to Arkil, a Viking chieftain who settled here in the 11th century.  The Norse invaders used much of Swaledale for summer grazing on small farmsteads which they called "saetrs". Over time this word changed by usage to "seat", "side" or "sett" and still survives in various place names today, such as Lunersett, Gunnerside and Ravenseat.  Our route headed out of Reeth and northwards into Arkengarthdale.

The day became increasingly overcast as we walked below  Fremington Edge, the three mile long escarpment which runs above the eastern side of Arkengarthdale.  Formed in the last Ice Age, the Edge is scattered with ruined buildings and old mine workings, evidence of the mining activity which had taken place in this area since the time of the Romans. 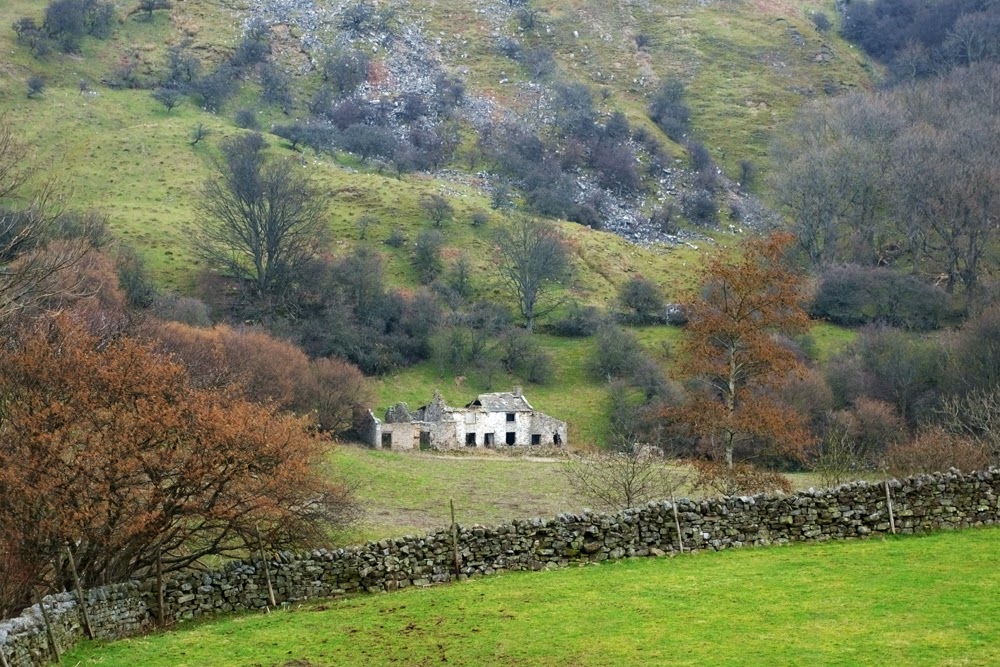 The public footpath was easy to follow across field after field and it was clearly marked with wooden finger posts.  If in any doubt about our direction we simply had to look over the field to the next drystone wall where a stile or a gate provided our bearings.  This eventually led us to a footbridge over Arkle Beck.  In Southern parts a "beck" would be called a "brook", which is to say a stream which runs along a stony bed.  Up here in the North it's a beck, from the Norse word "bekkr". Those Vikings again!  And clearly this "bekkr" was named after Arkil the Viking.  I paused for a while at the bridge, giving a few moments thought to those Nordic settlers.  I was sure that by the time they'd settled in this beautiful corner of Yorkshire they would have shaken off their reputation as blood-thirsty marauders.  Medieval chronicles described them as "wolves among sheep", but here in Swaledale they had become farmers of those sheep. 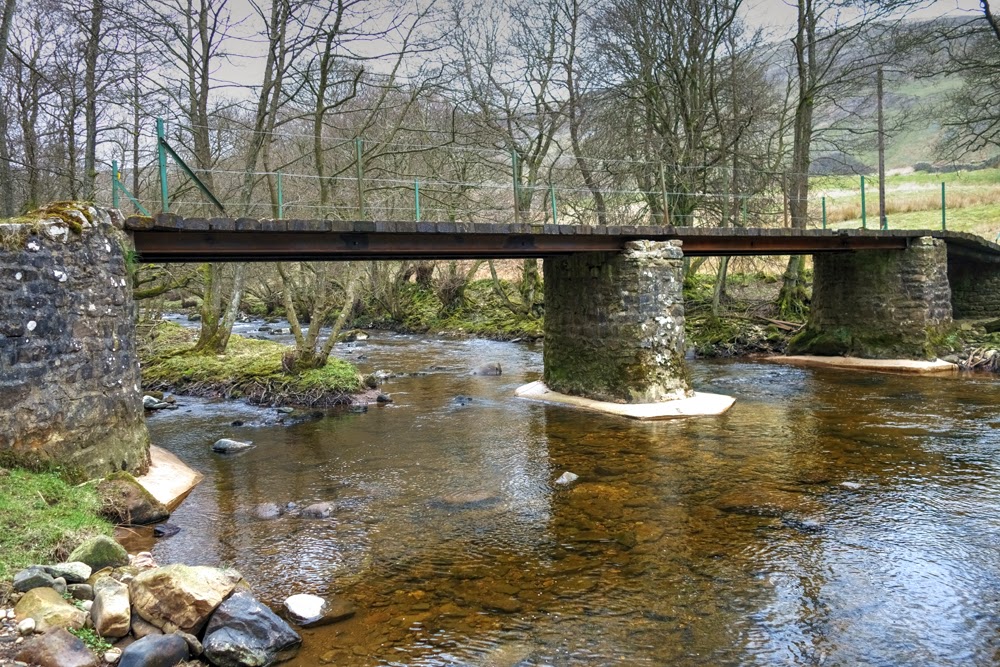 Our route continued along Arkengarthdale in a northerly direction, following the course of the beck upstream as it snaked past us on its way to join the Swale just below Reeth.  The view to the west of the beck was dominated by Calver Hill which was to be the final and highest point of our walk. 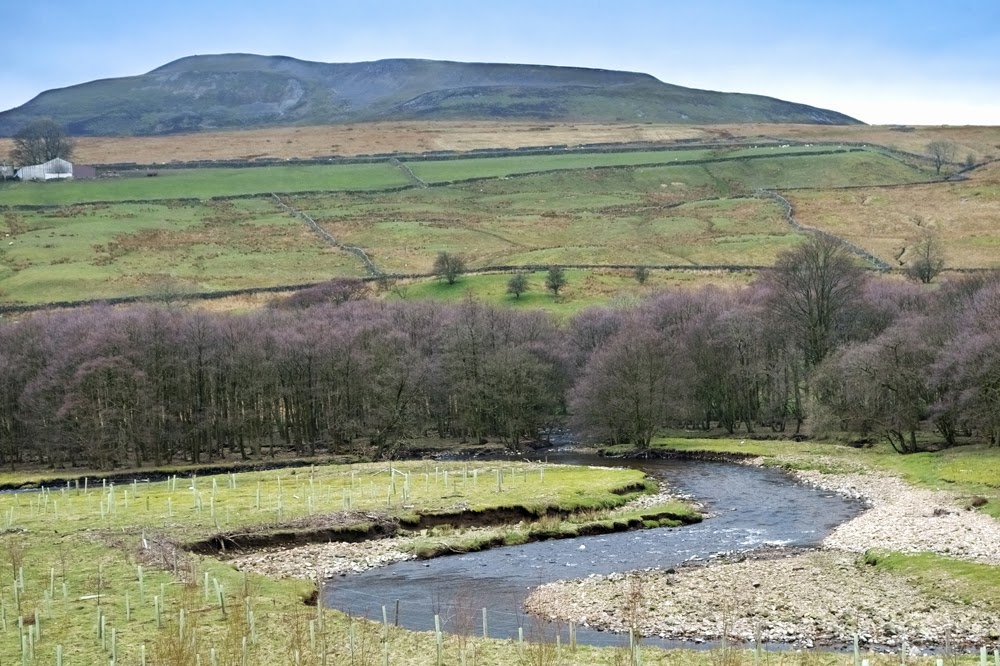 I have to confess that many times I'm guilty of not reading very much about an area before I set off on a walk.  Nor do I study maps in advance as much as I probably should do.  However, this can lead to some surprises, and that's just what happened for the next part of this walk.  Suddenly we found ourselves faced with a footpath which led through a little tunnel in the woods.  It looked intriguing but also rather dank and uninviting.   I had no idea what it was, what it had been or why it was there.  This was a prime example of my "shoot (photographs) now and ask questions later" method of discovery.  And having done just that I understand that this was a remnant of the former Slei Gill iron mine.  Two tunnels sit side by side, the smaller one used for draining water and the larger one for the movement of iron ore. 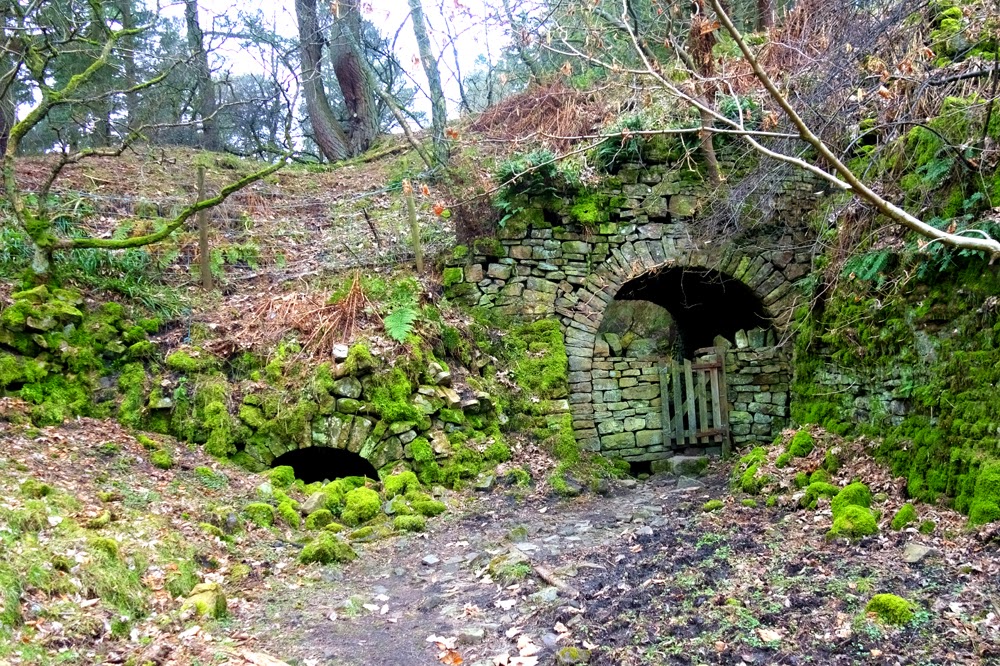 A short distance from the tunnel our route led us down into Arkle Town.  Evidence of Arkil the Viking again!  Except quite why this tiny hamlet bears the name "town" escapes me.  Apparently once there was a church, an inn and a workhouse in Arkle Town, but even in the 1851 census only 41 households were recorded.  The church was undermined by the beck and demolished in 1812, but as we discovered, evidence of the graveyard can still be found in a paddock through which our footpath led us down into the village. 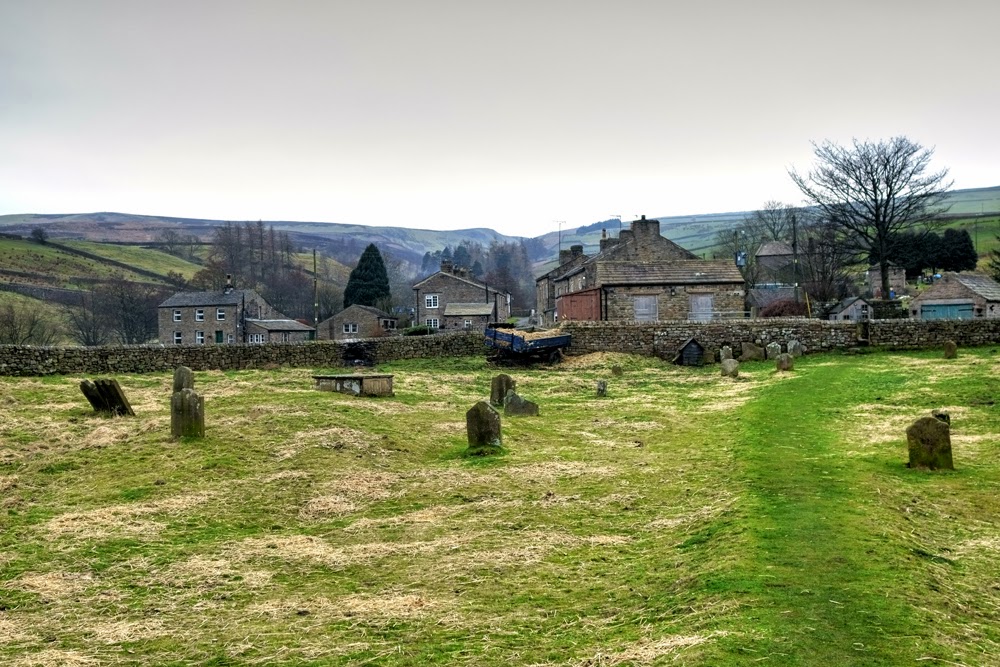 Graves in a field at Arkle Town

I had a quick look at a few of the gravestones, which mostly dated from the 18th century, like this lonely example, for one Thomas Alderson who died in 1747. 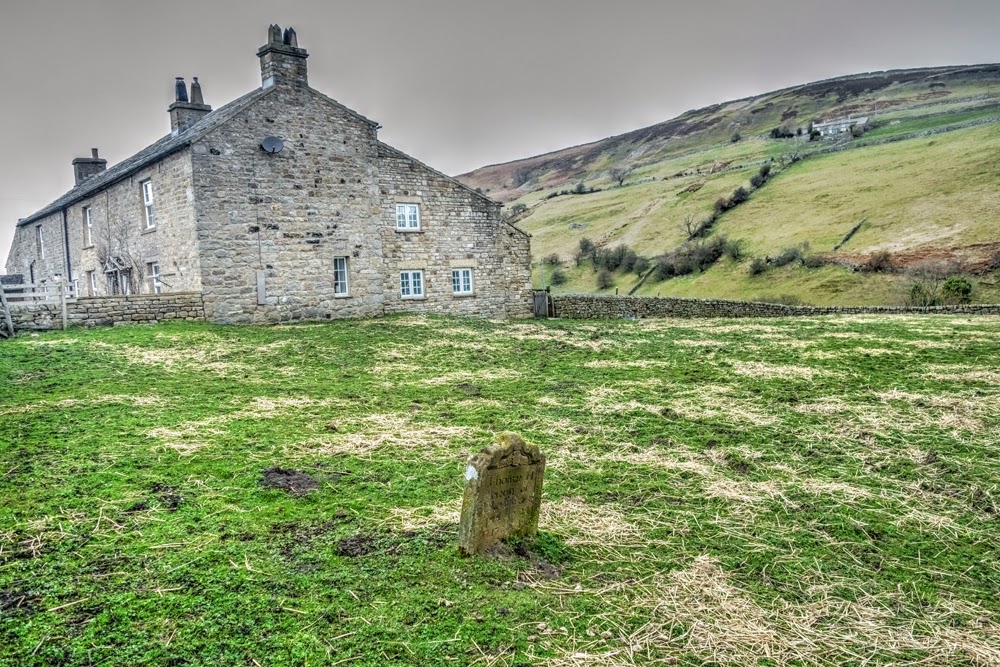 From Arkle Town we headed uphill, back along the road towards Reeth for a short distance, before turning onto open moorland and steadily climbing upwards.   The path we were following skirted round the base of Calver Hill but there hadn't really been much elevation in this walk and at just 1,600 feet it was waiting to be climbed.  The view from the top was lovely. I would have preferred better lighting but it was beautiful all the same.  Nearly all of Swaledale stretched out before us. 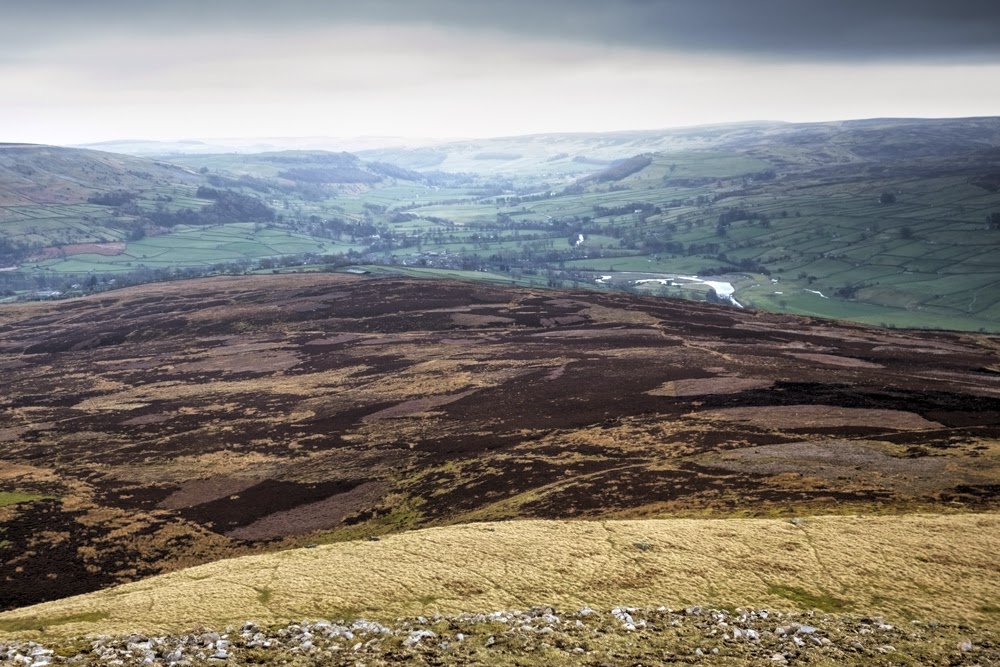 A fairly easy descent took us back down to Reeth.  I looked back up at Calver Hill and resolved to go up there again one day in better light, to capture that view.  But now it was time to check in to the pub and study the next day's route over a cold glass of Theakston's. 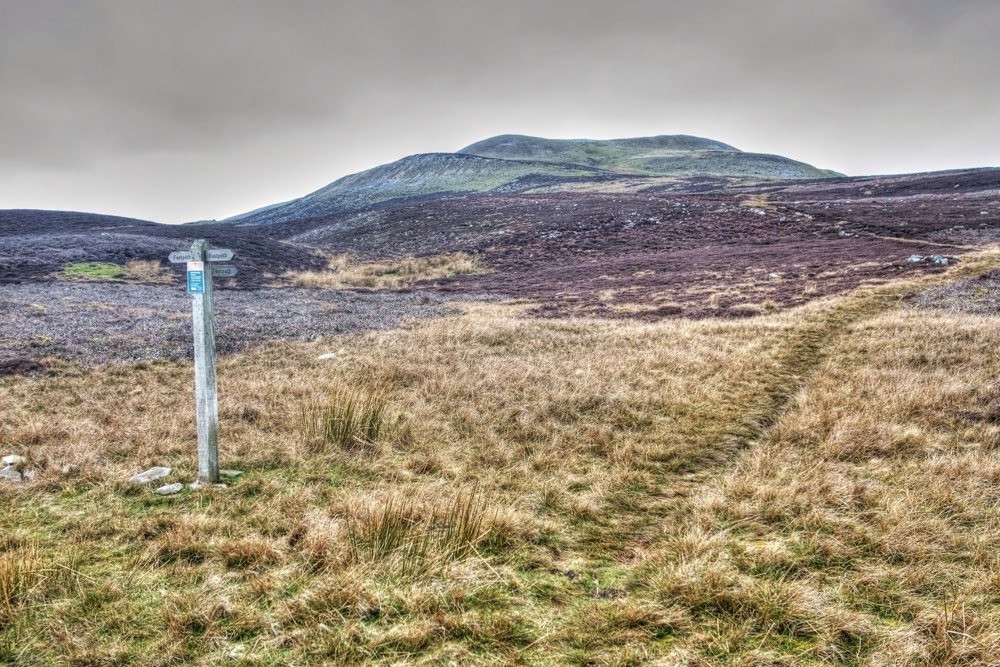 Looking back to Calver Hill on the descent to Reeth

From the centre of Reeth follow the road signposted to Langthwaite, over a cattle grid and then look for a public footpath sign posted across a field to the right.  Follow this path across several fields in the direction of Lanthwaite before crossing a footbridge over Arkle Beck.  After climbing up a slight incline look for a footpath on the left towards Lanthwaite which follows the course of Arkle Beck until reaching Arkle Town.  Leave the hamlet by turning left onto the road back in the direction of Reeth until a public footpath sign directs a route uphill onto open moorland.  This path meets up with a stony track, follow the track for a while until a footpath leads off to the left in the direction of Calver Hill.  From this point the path can either be followed around the foot of the hill or, for a better view, the hill can be climbed to the summit.  At the bottom of the hill the route back to Reeth is clearly signposted. 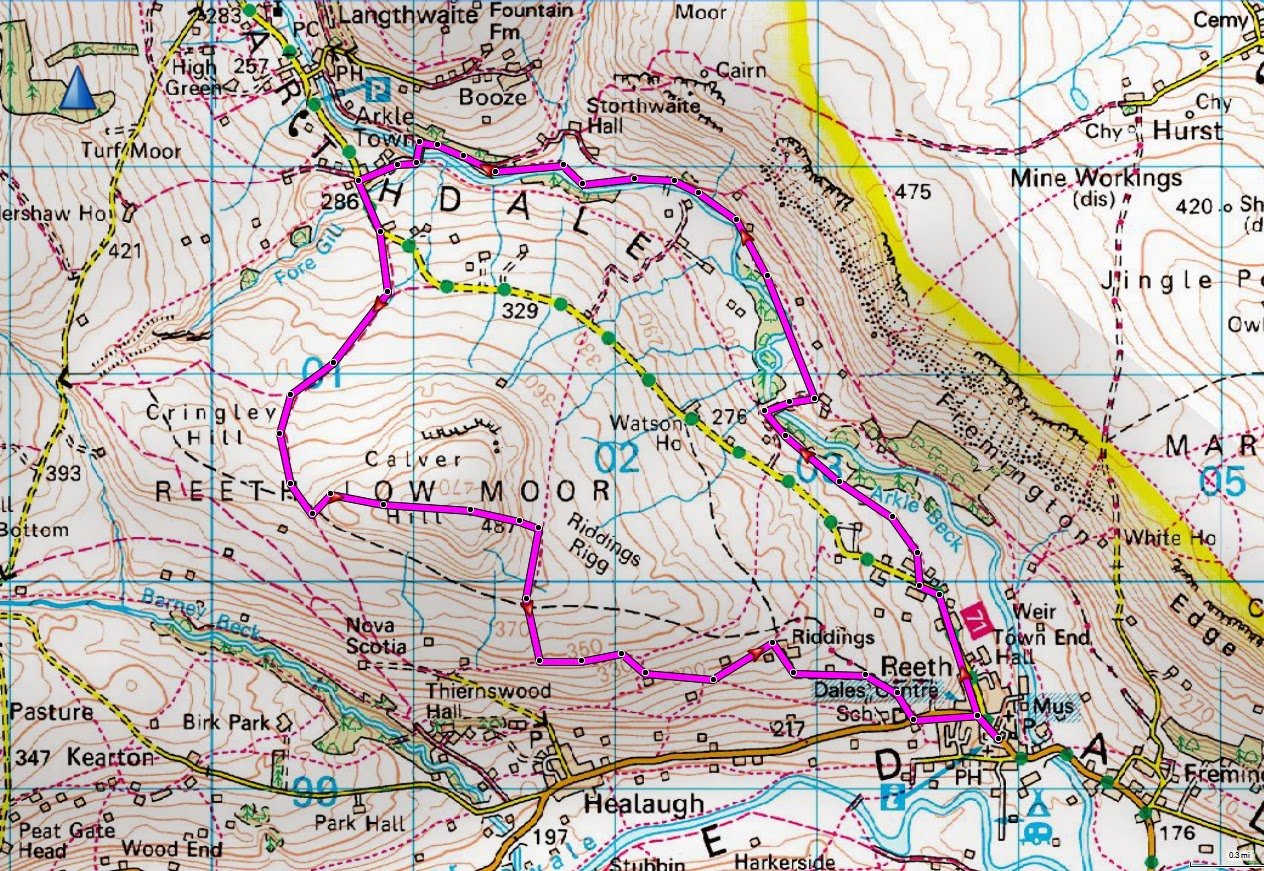