- March 19, 2014
I always intended to write about more than just walking in my blog, but for the past few months the walks seem to have taken over.  I suppose this is because, having decided to write a description and a journal for each walk, I had a bit of catching up to do.  Well, now I'm almost up to date, so it's time to include some extra stuff.  Of course, I'll still be writing about my walks, and hopefully improving the maps and route directions so others can enjoy following  in my footsteps.  But I'm also going to occasionally punctuate the walks with other items.

Over the years I've taken thousands of photographs.  Many of them have been for commercial purposes (for sale via a stock agency or as prints and canvases), but a large number have also been just for the record.  These are photos simply to remind me of where I've been, taken just for the pleasure of remembering the moment.   And recently I've also been snapping away purely with the blog in mind.  Now I've decided to spend some time going through my photo archives and selecting a few images where there's something of a story to tell.  So here is the first of those "stories behind the picture".

This is the tale of Troller's Gill, an eerie gorge that cuts through the limestone above the village of Appletreewick (pronounced "app-trick") in Wharfedale. 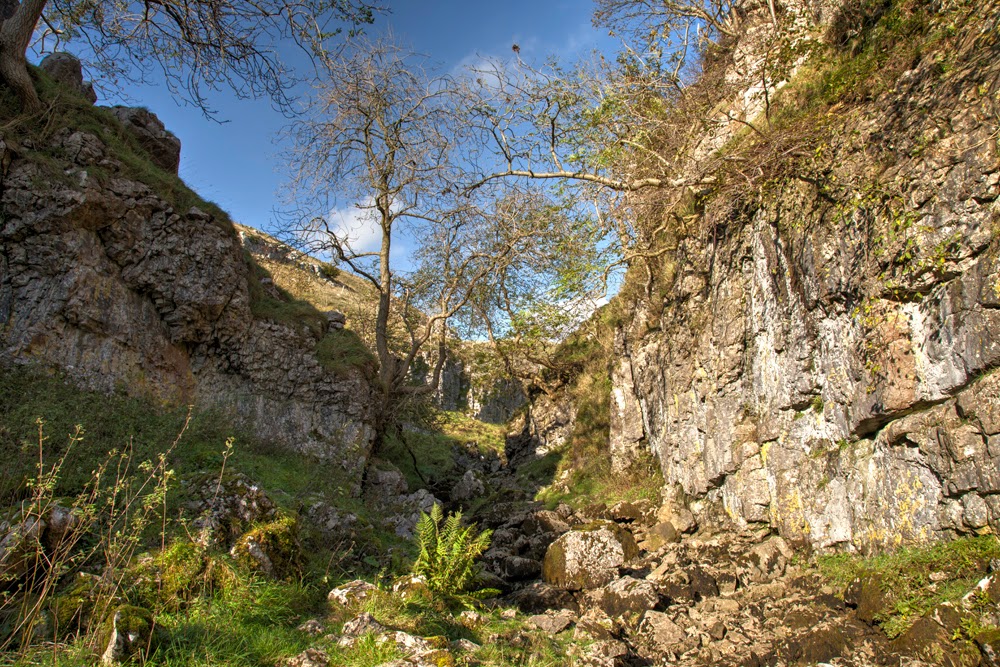 There are myths  aplenty about Troller's Gill.  Its name is supposed to originate from a group of Scandinavian trolls who live here, lying in wait at the top of the ravine, ready to hurl rocks at unsuspecting ramblers as they negotiate the rocky terrain through the narrow gap.  Other legends tell of flesh eating goblins, murderous gnomes, blood-sucking boggarts, rock crunching sprites and evil criminal pixie masterminds (alright, so I made the last one up, but you never know...).  It really doesn't sound like a very nice place to go for a pleasant walk.

The most legendary supernatural resident of Troller's Gill though is the barguest, which has been described as a monstrous black hairy dog with huge teeth and claws and fiery eyes as big as saucers.  Legends of the barguest tell that it will appear to foretell the death of a notable person at which time it will be followed by all the dogs of the neighbourhood, howling and baying in a horrifying procession.   There are several legends of barguests appearing throughout Yorkshire, including at Whitby where one is supposed to have appeared in advance of the arrival of Count Dracula.  Sir Arthur Conan Doyle, who was very interested in local myths and legends, supposedly drew upon tales of the barguest as inspiration for his Hound of the Baskerville.

In reality though, Troller's Gill is a beautiful place.  Walking through the ravine can be quite tricky and hazardous, particularly if the rocks are wet and slippery.  You need to concentrate to negotiate your way through.   So much so that trolls, barguests and evil criminal pixie masterminds are the last thing you'd worry about.