In 2012 the entire coastline of Wales, all 870 miles of it, became accessible as a National Trail.  Work is now underway to provide a similar coastal path for the entirety of England's coastline, although at the time of writing many sections are still inaccessible.  The beautiful coastline of East Yorkshire at Flamborough Head has been classified as a Heritage Coast since 1979 and has its own long distance footpath, the Headland Way.  Starting at Bridlington in the south it follows the coastline for 20 miles to Filey, just over the border in North Yorkshire.  The walk I'm describing here, which I undertook on a dull and blustery Sunday in early March, is a circular route of approximately 13 miles, starting and ending at Bridlington. 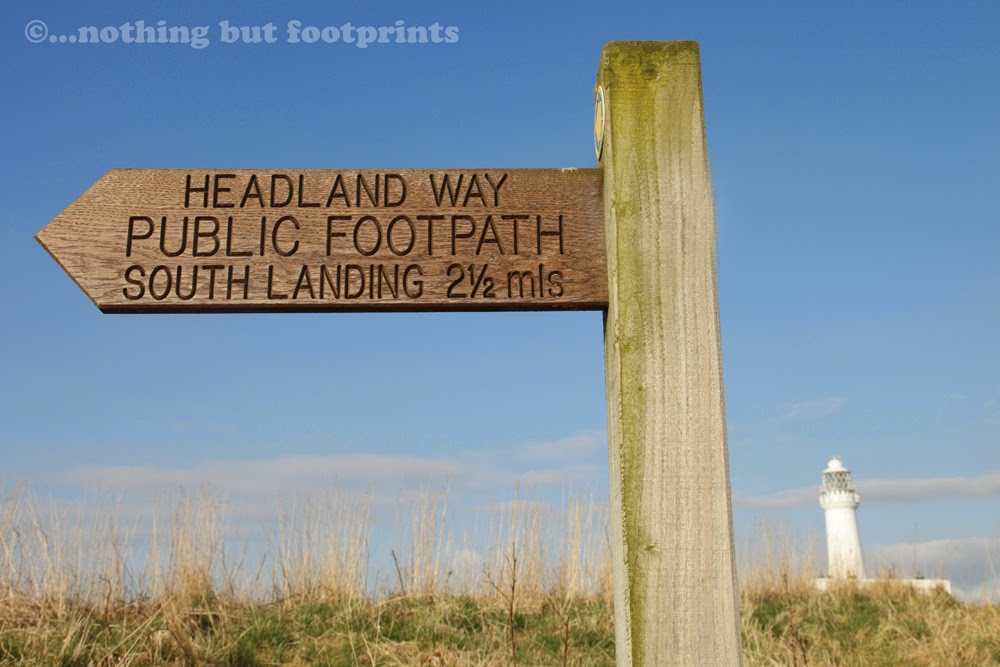 On the Flamborough Headland Way

I've walked along this stretch of coastline many times and so most of the images I'm using here were taken at other times, in better light.  Although I'll describe the whole of my route, I'm not providing a map as the paths are so well signposted and there are many different routes that can be undertaken, of varying distances.

The best starting point for a walk along this coastal path is Bridlington's North Beach Car Park at Limekiln Lane which is right on the cliff top and has spaces for approximately 1,500 vehicles.  From here the way ahead is obvious and the view of the headland is lovely. 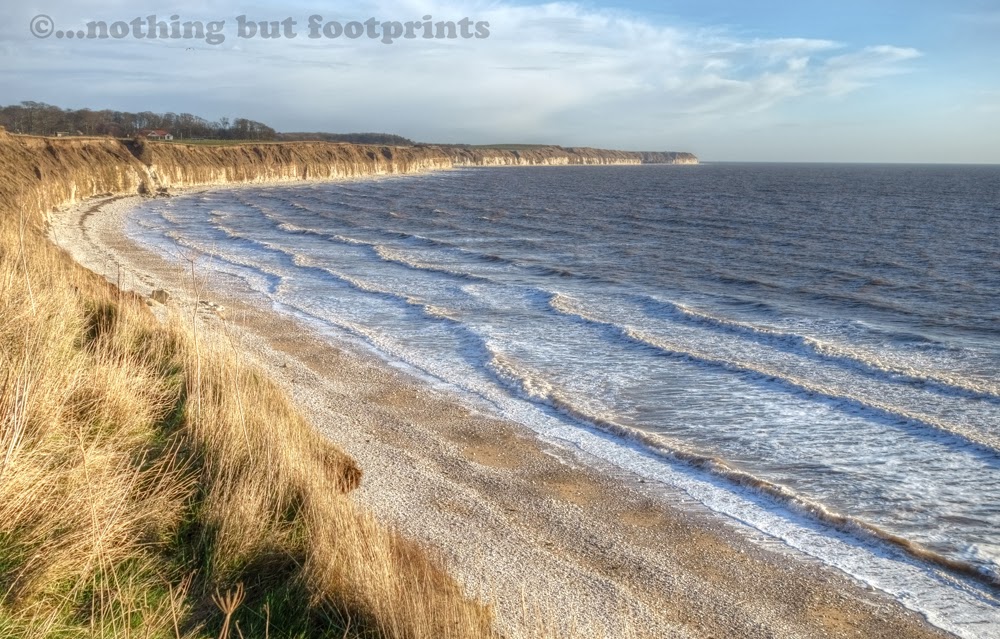 There are actually two clearly defined pathways along this stretch, separated by a broad section of closely cropped grass, and the one closest to the cliff edge provides the best views, with the added advantage of not having to keep a watch out for cyclists and the little land trains which operate during the summer months along the wider of the two paths.  Although it's unlikely anyone will need a rest so soon into this walk, the whole length of this section of cliff is lined with benches, all dedicated to people who in the past have loved this view.  And it's certainly a view worth savouring for a while.

After about a mile or so the path passes by Sewerby Hall, an impressive Georgian mansion, built between 1714 and 1720 by John Greame and set in 50 acres of parkland.  This was the main residence of the Lloyd-Greame family until 1934, at which time it was sold to the local council.  Thereafter, on 1st June 1936, the hall and park was opened to the public by the famous aviator Amy Johnson.  At the time of writing the hall is closed to the public while it undergoes restoration work and it is expected to re-open in the summer (2014).  The Park includes ornamental gardens, adventure playground, a nine hole golf course and a zoo and this remains open during the hall's refurbishment. There's a choice of paths again from Sewerby - either following the cliff edge (recommended) or a little further inland, cutting across a golf course (less interesting).  Both paths lead to Danes Dyke which was bypassed on my walk but is certainly worthy of a visit in its own right.  The name "Danes Dyke" is misleading as the "dyke" had little if anything to do with the Viking population who settled in this area.  Incidentally, the name Flamborough is thought to have derived from the Scandinavian words "flam" (promontory of land) and "burgh" (settlement).  Danes Dyke, however, predates the arrival of the Vikings by several centuries and is believed to date from the Iron Age.  At two and a half miles long it's an impressive earthwork feature which actually dissects the entire headland.  Its original purpose is unknown although it seems most likely it was intended as a boundary or fortification of some kind.  Today Danes Dyke is a nature reserve with trails leading all around the earthworks and through the densely wooded area down to the beach.  A visitor could happily spend a whole day here, but having descended the steps to the beach we climbed up the other side and continued along the headland in the direction of South Landing.  A point worth noting though is that there are toilets and a small refreshment kiosk by the main Danes Dyke car park, which is just a short detour up the (steep) slope from the beach. 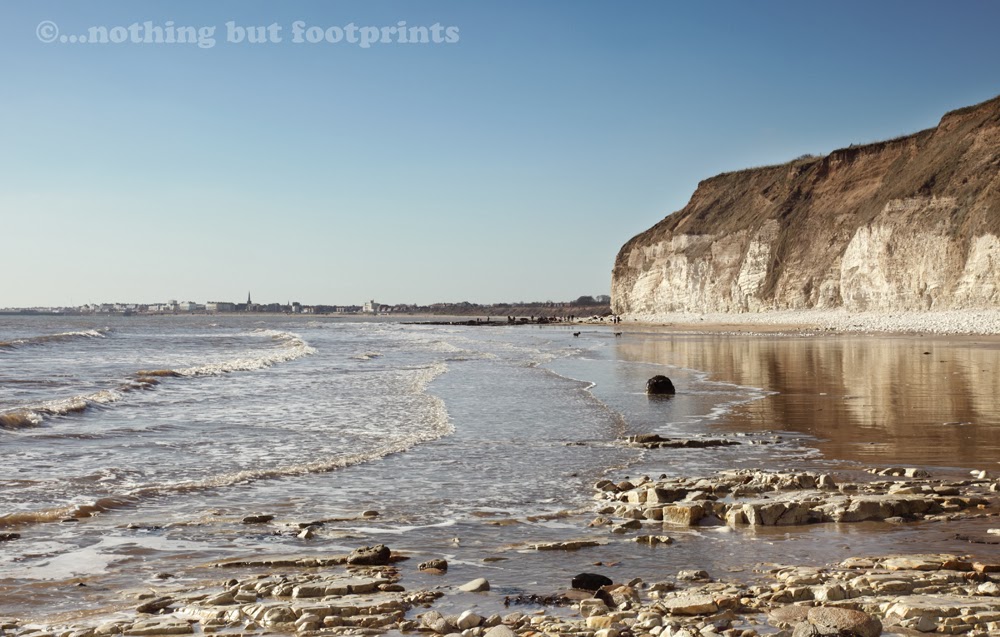 Looking back towards Bridlington from the beach at Danes Dyke

Flamborough Head has several little bays but only two of them are "landings" (a place where boats can be landed), named for their orientation on the headland, North and South.  Each used to have its own lifeboat station, although today the RNLI only operate a boat out of South Landing and in the holiday season their volunteers operate a small shop selling lifeboat merchandise.  We continued up the steps from the beach and back up on to the coastal path.  South Landing also has its own nature and sculpture trail, with various artistic installations depicting the history and heritage of the area.  This trail (which is circular) can be followed by turning left at the top of the steps, and this would possibly add an extra mile or so onto a coastal walk but is worth the extra effort.  I took a quick photo of one of the sculptures before continuing on my way.  This one represents the tradition of sword dancing by Flamborough fishermen. 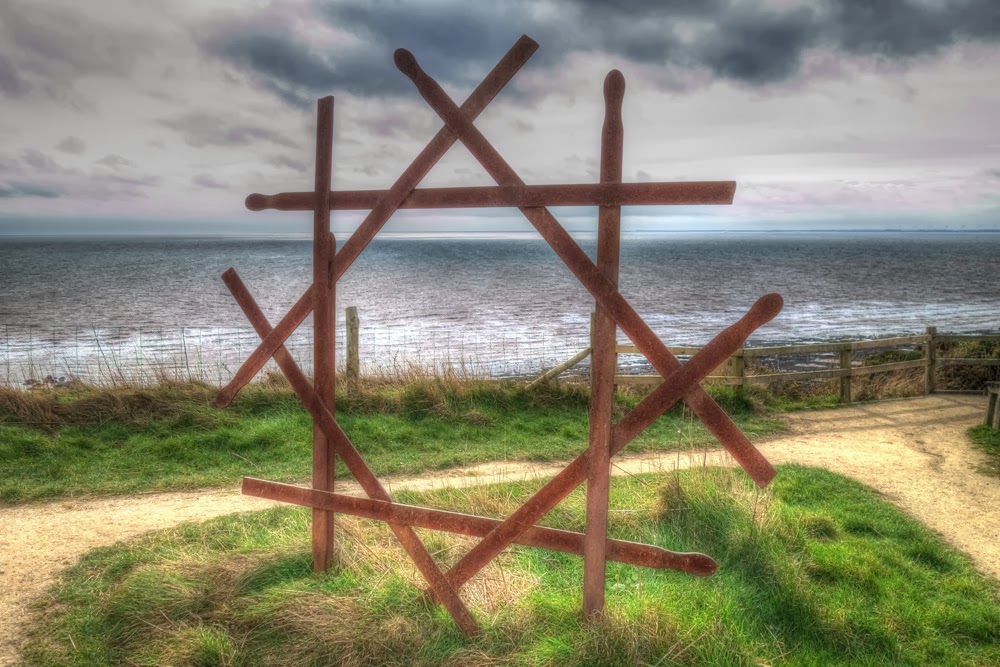 From South Landing it's a distance of about two and a half miles to the next point of interest on the walk - Silex Bay, home to not one but two lighthouses, as well as a fog horn, a shop, cafe and public conveniences.  It's also possible to catch a bus from here back to Bridlington or into the village of Flamborough.   The cafe is a nice place to get a drink and a snack although I personally would not recommend it for a meal.  I don't really like to give negative reviews, so I'll just leave it at that.  Tea or coffee and a scone or cake would be my choice here.  That's all!  We had a break here for lunch.  Anyway, moving swiftly on...which we should have done.... 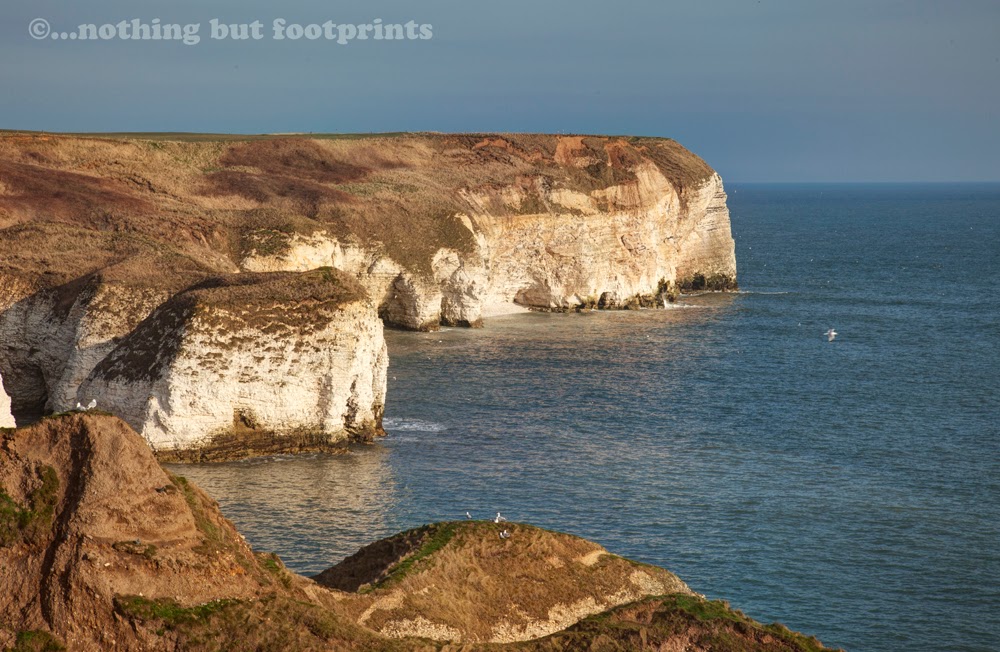 There has been a lighthouse on Flamborough headland since 1674 and a short detour of a couple of hundred yards or so inland takes you to that very first lighthouse, which was built from chalk and was designed to hold a beacon.  Recent restoration work has cast doubt as to whether the beacon was ever actually lit, but it's nevertheless a rare survival and a fascinating structure. 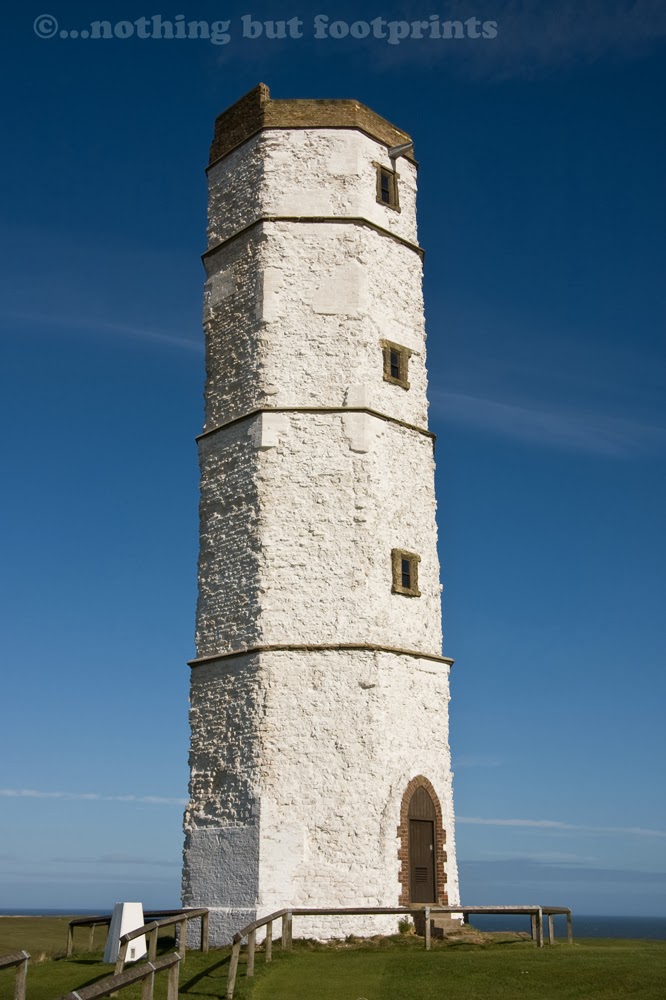 The present day lighthouse was built in 1806 and was first lit on the first of December in that year.  It was electrified for the first time in 1940 and fully automated in 1996 which meant there was no longer the necessity for there to be a resident lighthouse keeper.  Today it is monitored and controlled by Trinity House from their operations centre in Essex. 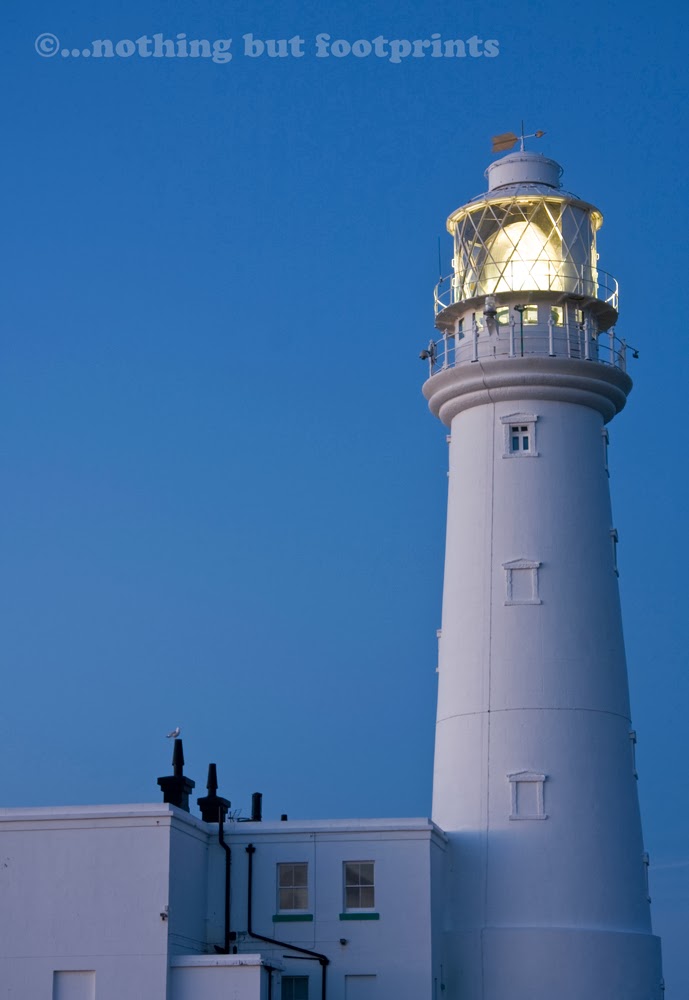 Leaving Silex Bay behind us we continued around the headland on what is arguably the most picturesque section of the route, following the cliff top for approximately one and a half miles to the little bay at North Landing.  In places the path seems to get perilously close to the cliff face, so anyone afraid of heights may not feel entirely comfortable, although to avoid this section would be to miss some lovely scenery and wildlife.  Seabirds that can be spotted here in the summer months include fulmars, herring gulls, kittiwakes, guillemots, razorbills and puffins. 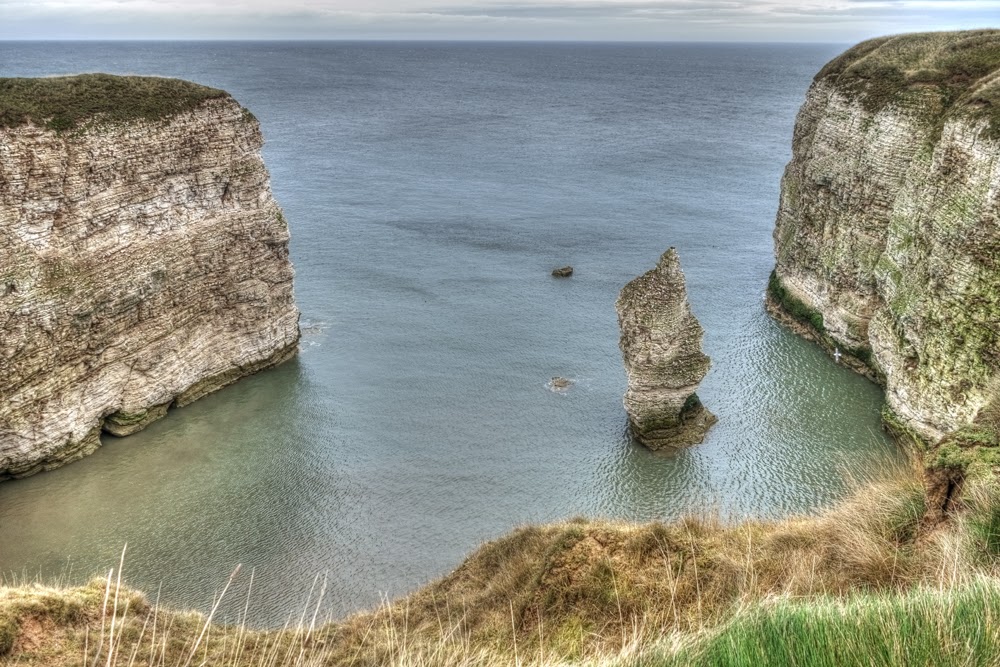 North Landing is definitely the most attractive, and popular of the two "landings" and is well served with a bar, cafe and shop.  In the summer you can take a boat trip from here to see some of the caves and hear tales of fishing and smuggling.  It's also a lovely place to sit with a drink before continuing with a walk.  Or, if you've had enough at this point, you can catch a bus back to Bridlington.  For the more energetic, the coastal path continues from this point in the direction of Thornwick Bay and then the impressively high Bempton Cliffs with their RSPB bird sanctuary.  For us though, this was the turning point for our walk and we headed away from the coast along the main road back into the village of Flamborough.  From here we walked through the village and out along the main road towards Bridlington before turning off the road into Danes Dyke where we enjoyed a short section of the woodland nature trail before taking the path over the golf course back to Sewerby and then along the cliff top path to Bridlington.  The total distance of this walk, according to the GPS, had been 12.75 miles. 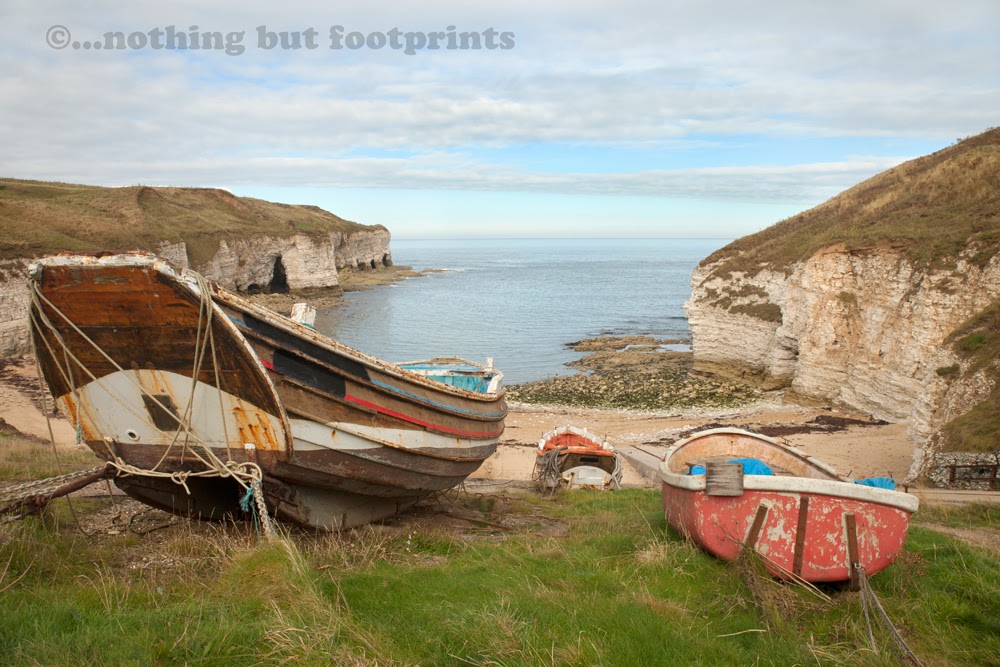 It had been a very interesting and varied walk, with plenty of elevations thanks to all the steps up and down the various little bays.  And I ended it with a massive blister on each heel!  This wasn't due to the distance, however, or to any problem with my boots.  It turned out (I discovered about 6 miles into the walk) that I'd inadvertently put a pair of Tom's size 11 socks on my size 6 feet, resulting in the back of each sock bunching up and rubbing my heels.  Proper footwear is so important.  And that includes socks.  From now on I'm only buying them in girly colours!