After the wettest winter on record (according to Met Office statistics), Spring came as something of a surprise.  One moment it was cold and damp and the next the sun was shining and daffodils were starting to open up.  At least, that's how it seemed to me.   And with the onset of Spring came the feeling that I hadn't climbed enough hills lately.  It was time, literally, to spring into action.

When thinking about where to start it was tempting to head straight for the Lake District and tackle the likes of Great Gable, Haystacks or High Street (the top three on my "what to climb next" list).  Then I hesitated.  It was hard to believe, but it had been five months since Grisedale Pike and although I'd kept walking all winter and had tried  to stick to my "Mountain Fitness" programme (not very successfully if I'm truthful), anything over 2,000 feet was possibly a little too ambitious.  After a little research online and a quick look through my walking books I decided to head for the Yorkshire Dales, to the village of Kettlewell, and the confusingly named Great Whernside.

Regular readers of my blog will know that in November I had climbed Whernside, the highest mountain in the Three Peaks and, indeed, in Yorkshire.  It's perhaps understandably confusing then to learn that 17 miles to the east of Whernside sits Great Whernside which is in a different range of hills and is lower in elevation than just plain old Whernside.  In choosing the next hill to climb, my confusion didn't just end with the name.  I was also confused by the altitude.  When it came to Great Whernside, it seems,  I went up a hill, but came down a mountain!

I don't know why I had an altitude of 1,500 feet in mind when we set off from Kettlewell in Wharfedale on this overcast Saturday morning.  That height seemed about right to get me started for what I hope will be a year of increasingly higher climbs.  What I wanted was a steady but not too steep walk upwards, followed by a gentle descent and then a few extra miles on the level.  What I got was actually a very steep and long slog which I soon realised was proving to be too much of a challenge.  I don't know how I had got that figure of 1,500 feet in mind.  At 2,310 feet Great Whernside is not a hill but a mountain, just 100 feet short of its namesake Whernside.  Not only was I confused, I was very quickly in a little difficulty. 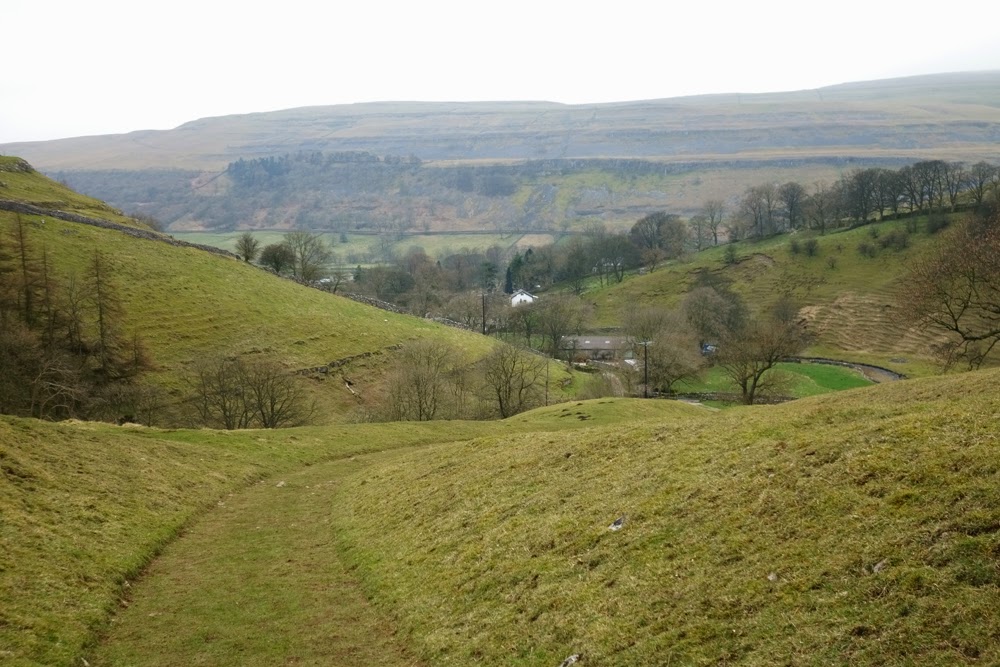 Steep ascent out of Kettlewell

The route we took from Kettlewell was unrelentingly steep and led us to Hag Dyke, a Scout Hostel administered by the Ben Rhydding Scout and Guide Group from Ben Rhydding, Ilkley.  The higher we climbed the closer we were to the cloud cover which shrouded the top of Great Whernside (and further added to my confusion as to its height).  Hag Dyke was a welcome sight, if an eerie one.  At this point I seriously considered turning around as I struggled to catch my breath and at one point felt as if I might faint.  I sat for a while on a protruding ledge on the side of the house and, as I began to recover, I realised that quitting at this point was not an option. 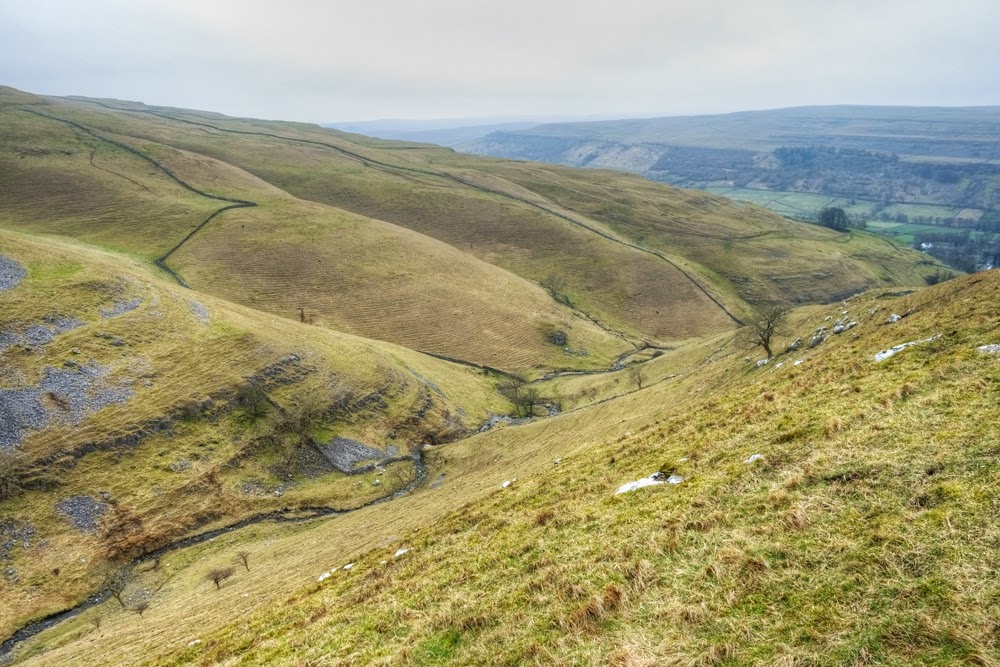 I was glad of the shelter provided by the building and for that reason I found it to be a welcoming place.  Not at all eerie.  Had I known that it's reputedly haunted (I know not by what) then I may have recovered a little faster. 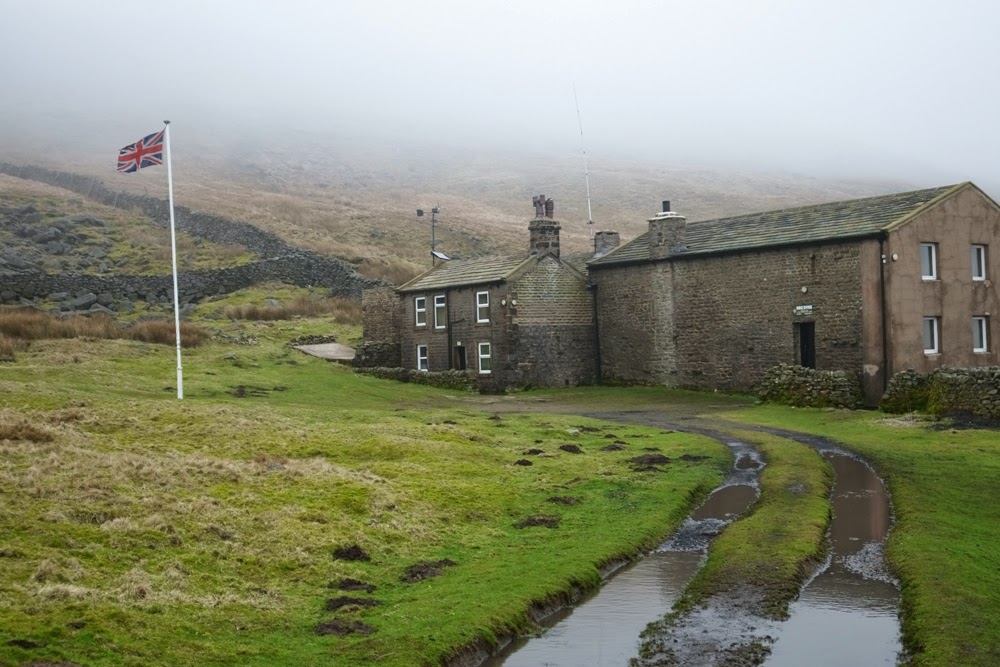 From Hag Dyke there was a little bit of a scramble which compared to the steady slog I'd already undertaken didn't seem too arduous and we very quickly reached a series of cairns.  The cloud was really descending now which I believe was to my advantage in that I couldn't see that there was yet more climbing to be done to reach the summit. 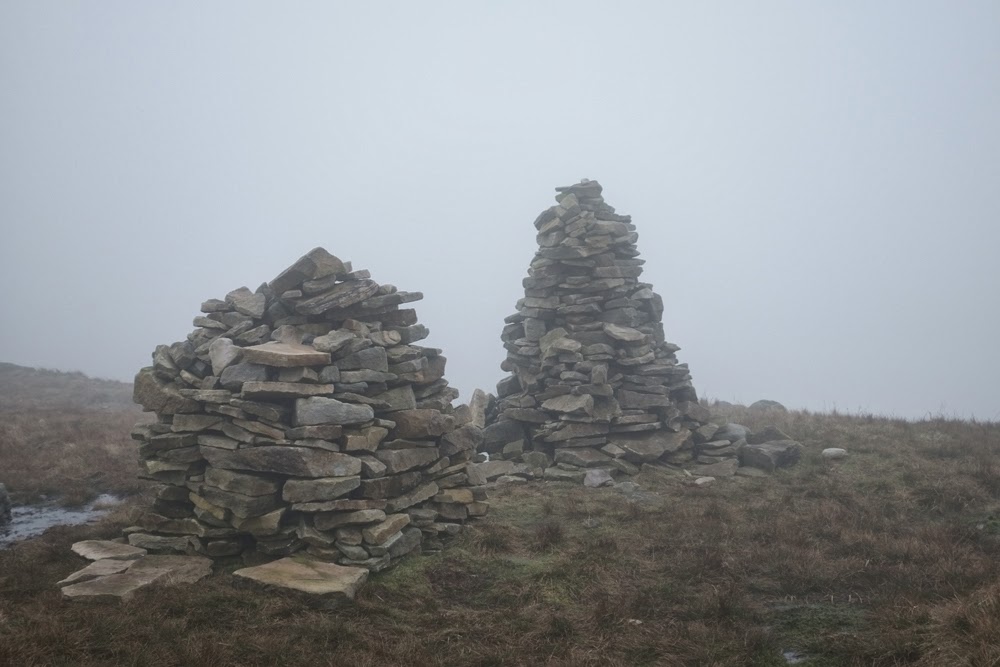 Cairns in the cloud above Hag Dyke

Thankfully though this was much steadier than the previous hike upwards and accomplished with relative ease.  A couple of walkers passed us by on their descent and one of them commented "It's a bit claggy up there", which I thought referred to the cloud but, as we quickly discovered, was a bit of an understatement regarding the ground.  It was nearly all pure bog!  And the visibility was very poor too. 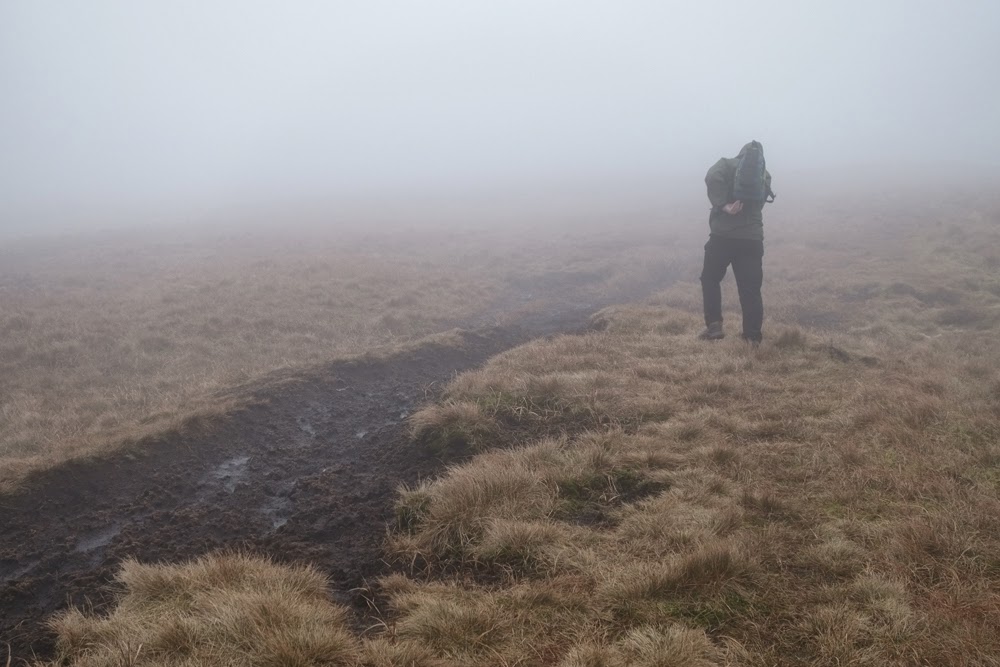 Through a bog in poor visibility
Thankfully the path was easy to spot and navigation was aided by posts painted with yellow dots placed at regular intervals.  As we reached the summit the ground became firmer and the terrain rockier until at last the summit cairn was in sight.  Disappointingly the view from here was non-existent.  I later discovered that on a clear day one can see the Three Peaks of Pen y Ghent, Ingleborough and Whernside and beyond to the distant Lakeland fells.  We could barely see the other walkers who gathered around the summit's trig point to pose for photos.  It was very wet, very windy and very cold.  And I was elated.  Because at this point I squinted at my OS map and realised (embarrassingly) that this was not a mere hill of 1,500 feet but a true mountain. 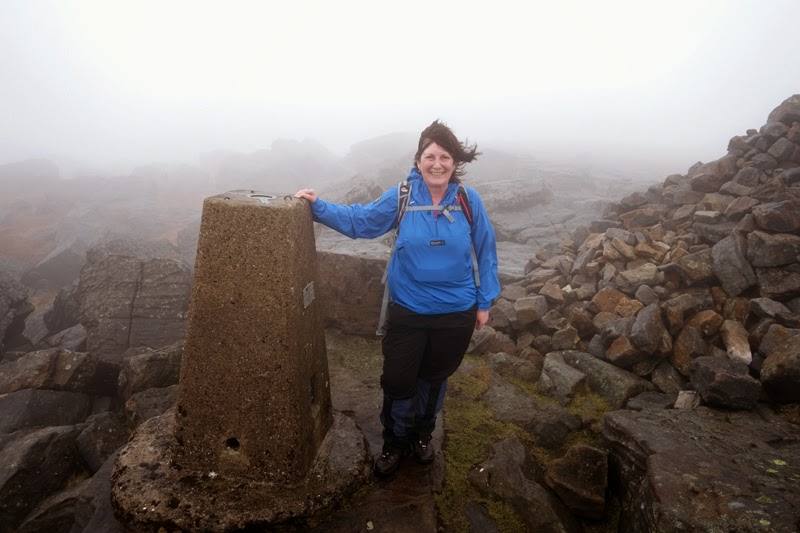 On the summit - it didn't feel much like Spring up here!

The summit wasn't a place to linger and after a brief rest we began to follow the path down in the opposite direction to our ascent. Again this was aided by those helpful direction posts as we made our way through the cloud and between the rocks.  I thought it was a bleak and yet strangely beautiful landscape. 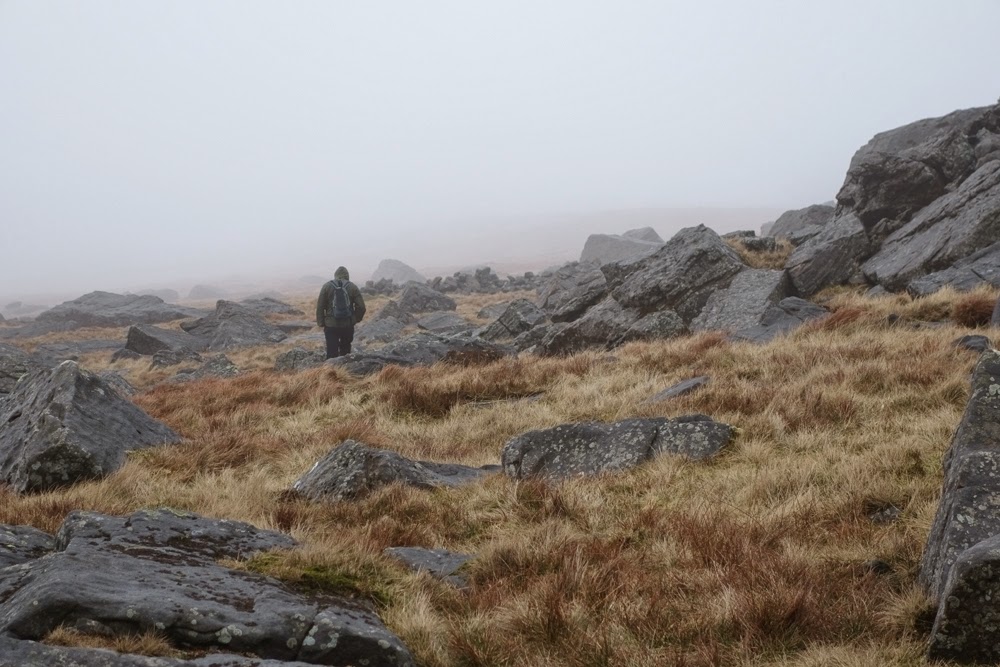 The ridge walk before the descent

A short distance into our descent I turned back to see that the sun was beginning to burn away the low cloud and mist and the summit was becoming visible from a distance.  I was in two minds whether to turn back but instead we continued our descent. 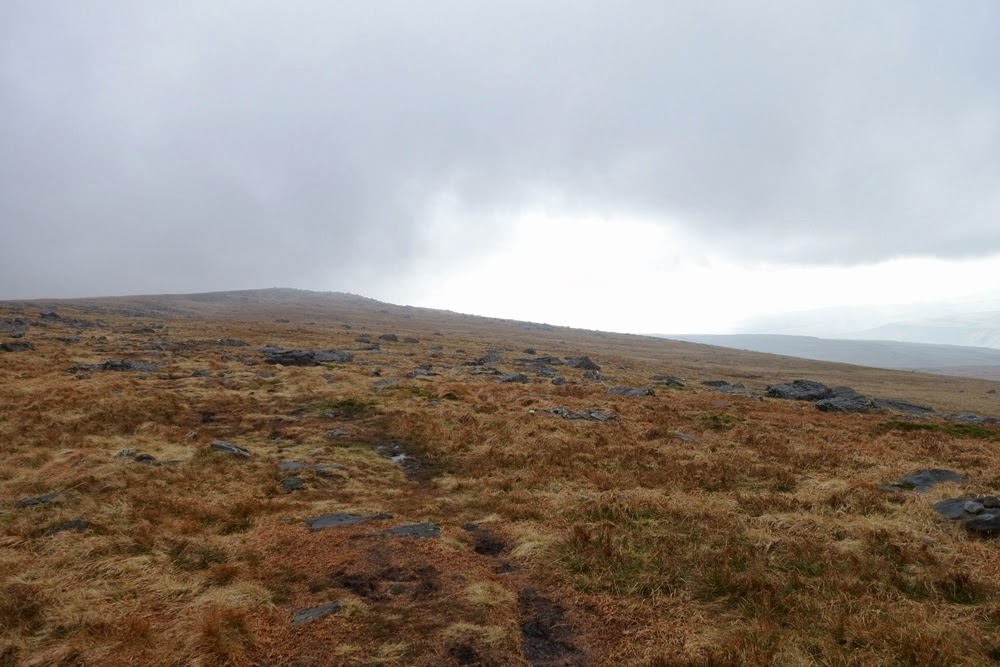 The cloud begins to lift

All the while the light was improving and the landscape was opening up before us.  The descent on this side was not too steep.  In fact, this may have been a better route to have taken to the top but at least it was quite easy on the knees. 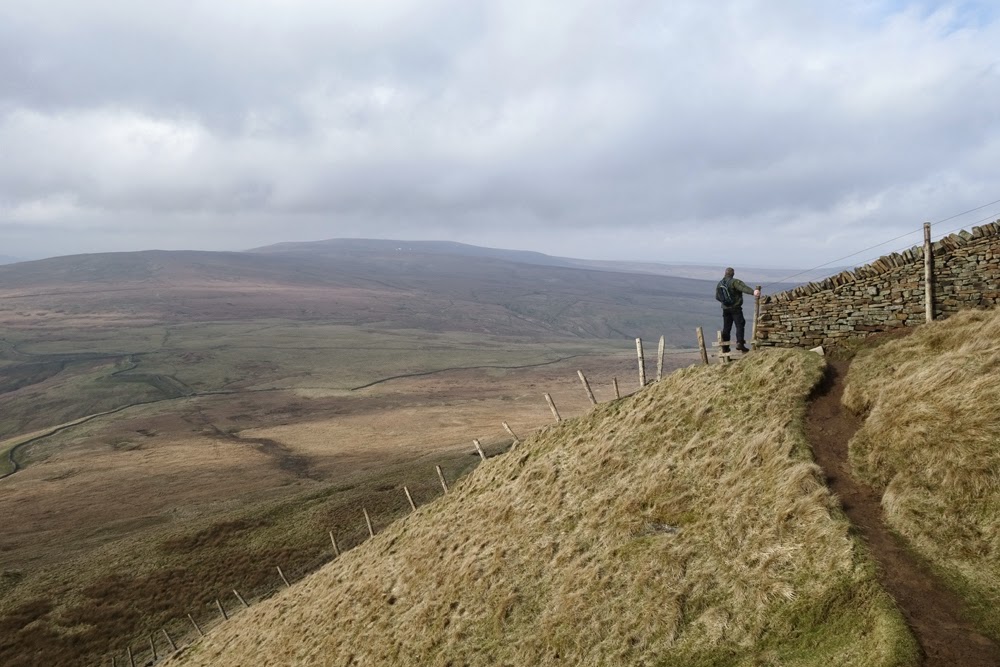 On the way down - the landscape reveals itself

By the time we'd reached the road which runs out of Kettlewell towards Leyburn the whole of Great Whernside appeared to be bathed in sunlight.  It was a pretty sight to behold and only very slightly annoying that the weather had waited for us to get this far down before deciding to change so drastically. 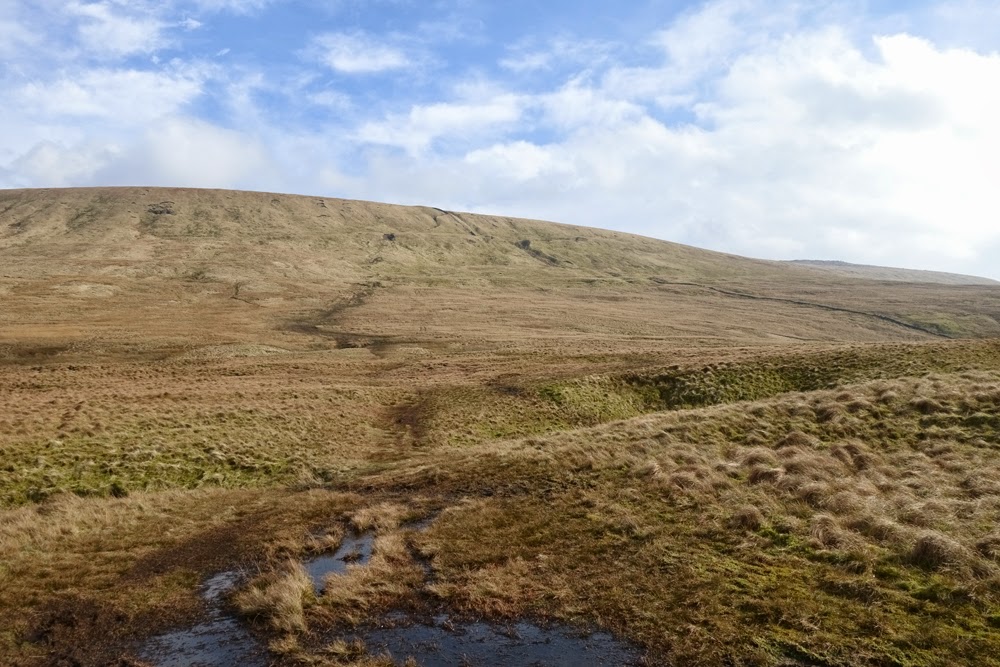 And suddenly the sun came out

The rest of the walk was all downhill, the final section being along a stony track where a few of the locals gathered menacingly.  Thankfully we managed to get by them without incident. On the lane back down to Kettlewell

Back in the village and the sun was shining and the sky was blue.   It was a great shame the weather hadn't presented itself in reverse, because now the pub beckoned. 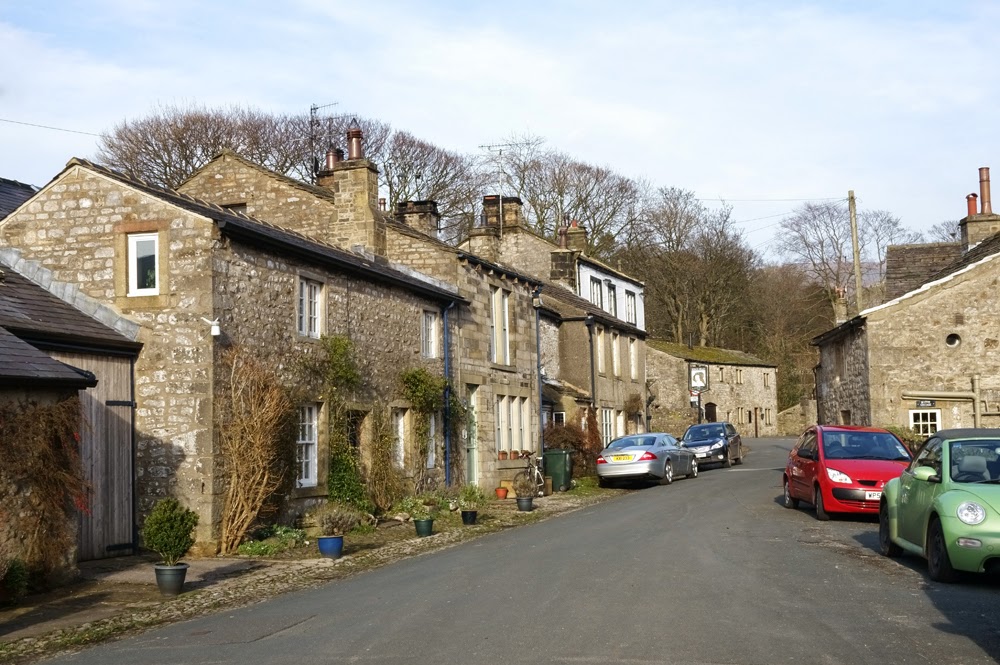 The sun shines in Kettlewell

As I pondered over the day's walk over a glass of Timothy Taylor's Ram Tam (a very nice dark ale) I realised that I'd perhaps been a bit too complacent.  For starters I hadn't really studied the map properly before setting off.  How could I not have  noticed the true height of the summit?  And if I had realised how steep a climb lay ahead of me, would I have still attempted it?  Clearly I either wasn't as fit as I'd hoped by now or my technique had been at fault because I really did feel quite ill for a while before my rest stop at Hag Dyke.  I didn't ponder over this for too long though.   A rather delicious steak and ale suet pudding and another pint of Ram Tam saw to that!

This is a very straightforward and easy route to follow.  From the main car park in Kettlewell head along Middle Lane to Scabbate Gate where a public footpath sign points to Hag Dyke.  This is where the climb instantly begins and continues all the way to the Scout Hostel.  The path to the summit can be found behind the hostel where there's a short section of easy scrambling over rocks to three cairns.  From this point the path to the summit is easier, the first section having paving slab steps before the boggier terrain begins, the route being marked with posts painted with yellow spots.  The summit is marked with a triangulation point and from here a short ridge walk passes among the large rocks in a northerly direction.  Again the route is marked with yellow spotted posts.  The path down this way is gentler than the ascent and eventually meets the road to Leyburn across which a path skirts the edge of the valley at Cam Head before descending back down to Kettlewell.  The total length of this route is approximately 8 miles. 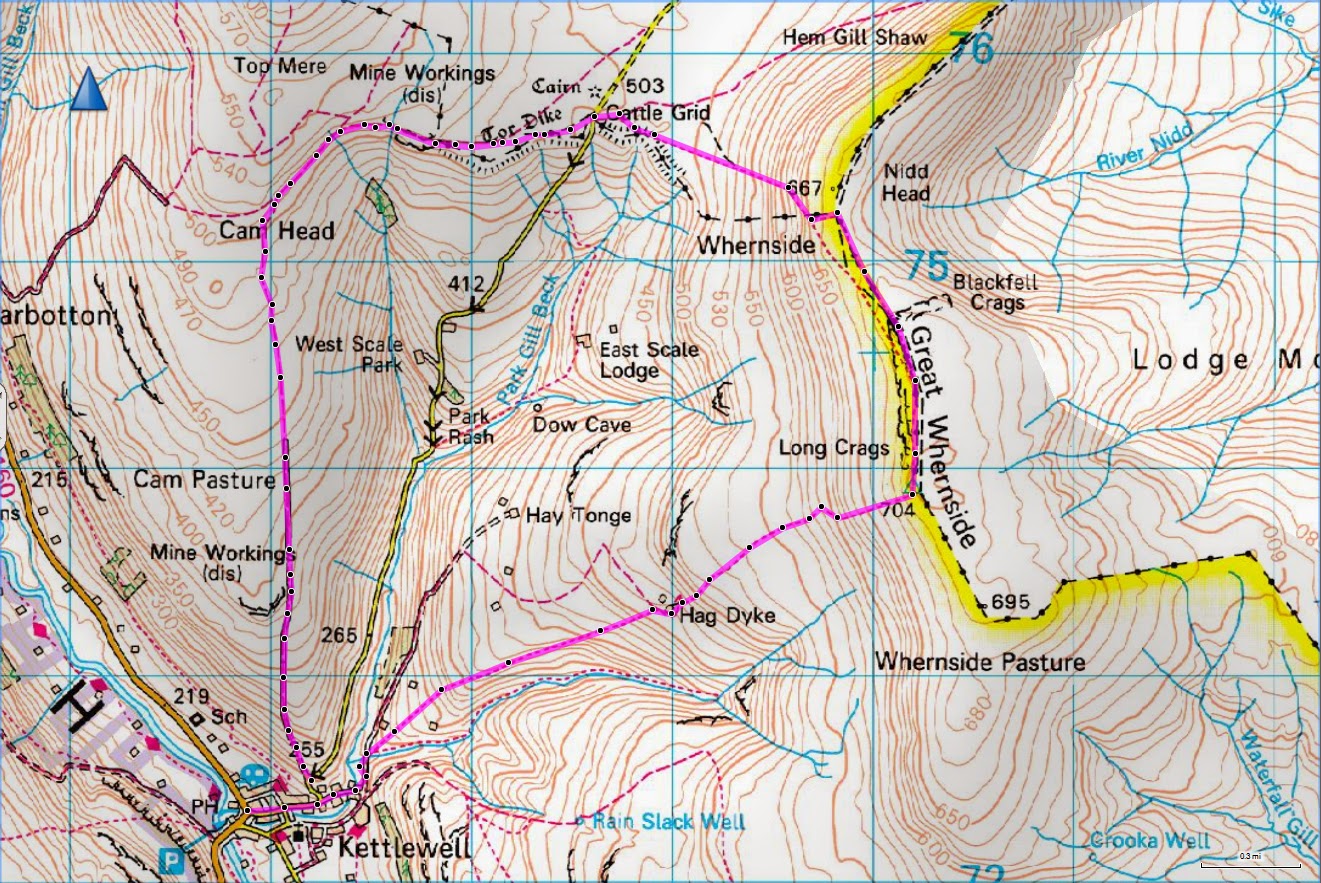