- March 03, 2014
When I started this blog I decided that perhaps it wouldn't be a good idea to write about every walk I'd done because, let's face it, some walks just aren't very interesting.  And, as a photographer, there are days (too many of them!) when the light is poor, the sky is grey and the views lacklustre.  In spite of some interesting aspects, this was very nearly one such walk.  For me though it had one redeeming feature worth writing about - beer!

When I sat down to plot out this route I took several factors into account.  First of all there was the weather forecast, which for this particular Sunday in late February had predicted a dry, overcast day with gusty winds.  Although, as I frequently am, I was drawn to the North York Moors, the higher ground offers very little shelter.  The lower ground, on the other hand, can be poorly drained and, as there'd been a fair bit of rain, the going underfoot would be, at best, squelchy.    After much squinting at OS maps and searching the internet for recommended walks, I opted for a circular route of just under ten miles, beginning and ending in the village of Hutton-le-Hole.

A couple of miles north of the little town of Kirbymoorside, Hutton-le-Hole is a picturesque moorland village, best known these days for being the home of the Ryedale Folk Museum.  Spread over six acres, the museum tells the rural history of the area from the Iron Age right up to the 1950s with exhibits, reconstructed shops and houses, living history and craft displays.  I've visited here several times before and can wholeheartedly recommend it as a wonderful day out for all age groups.  Today though there was just time for a quick snap of the old tractor parked outside the main entrance before we set off. 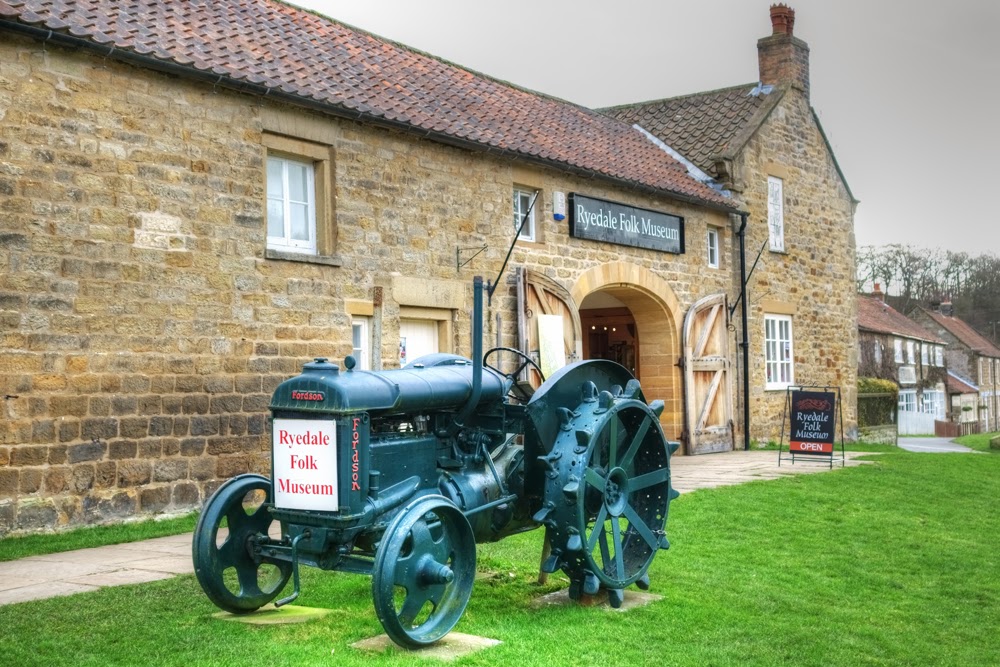 Our route took us along the main street through the village in the direction of Kirbymoorside and then followed a muddy track up a steep slope.  This was also a bridle path, clearly well used, and as you'd expect very muddy indeed.
The route was a straightforward one to follow.  We simply had to stick to the bridle paths (and the mud) all the way to the village of Appleton-le-Moors, following the route of the Tabular Hills Walk for some of the way. 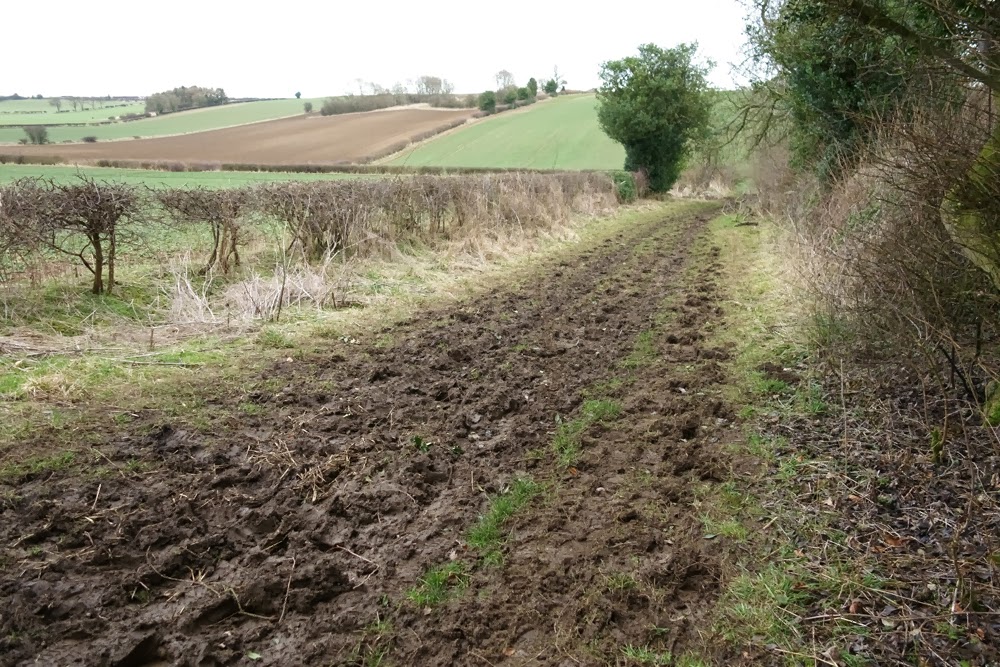 The path from Hutton-le-Hole to Appleton-le-Moors

It was something of a relief as the village church came closer into view as I realised that our route was now going to follow a quiet country lane for a short way.  No more mud for a while! 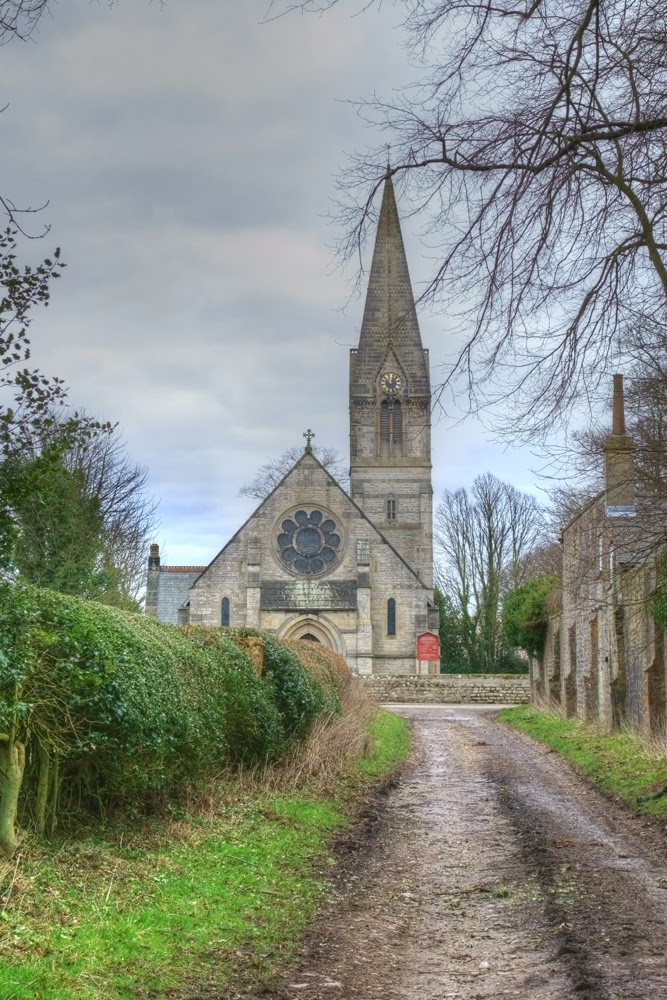 Built in 1869, Christ Church, Appleton-le-Moors was described by Poet Laureate Sir John Betjeman as "a little gem among moorland churches".  A sign outside announced that it was open to visitors, but it being a Sunday morning I figured the congregation may still be in attendance and so, on this occasion, we passed it by and continued, with some enthusiasm, in the direction of the ultimate focal point of this walk.  A pub with its own brewery! 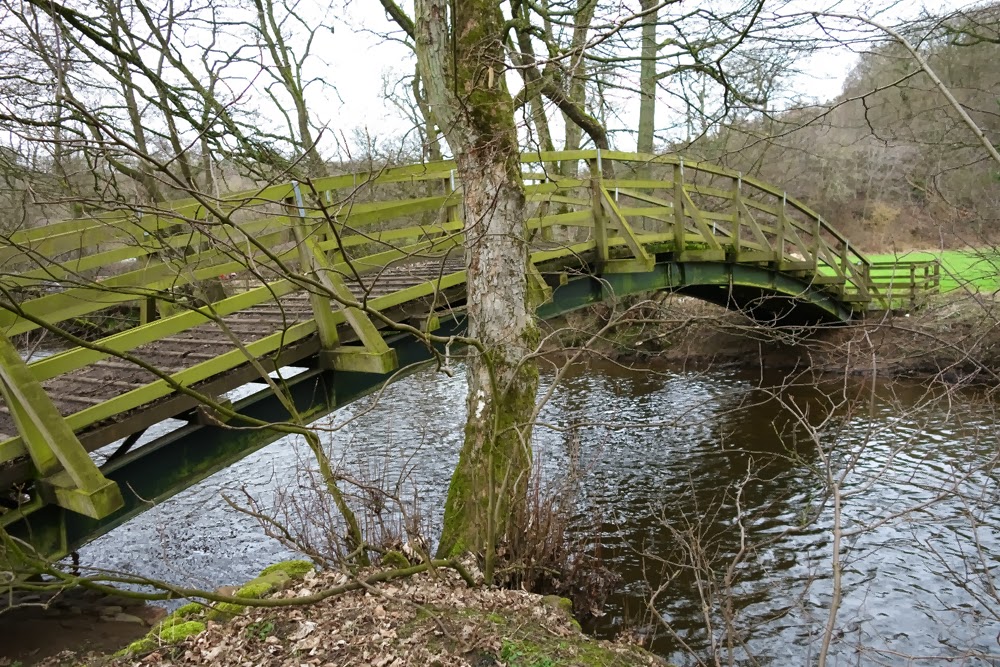 Footbridge over the River Seven

Continuing along a quiet country lane and then onto a farm road we walked downhill to join yet another muddy bridle path which led us to a wooden bridge over the River Seven.  From here I had plotted out two possible routes up to the village of Cropton.  It turned out, rather predictably, that both were equally muddy and so we opted for the most direct, uphill route which emerged on the road right by the side of the New Inn. 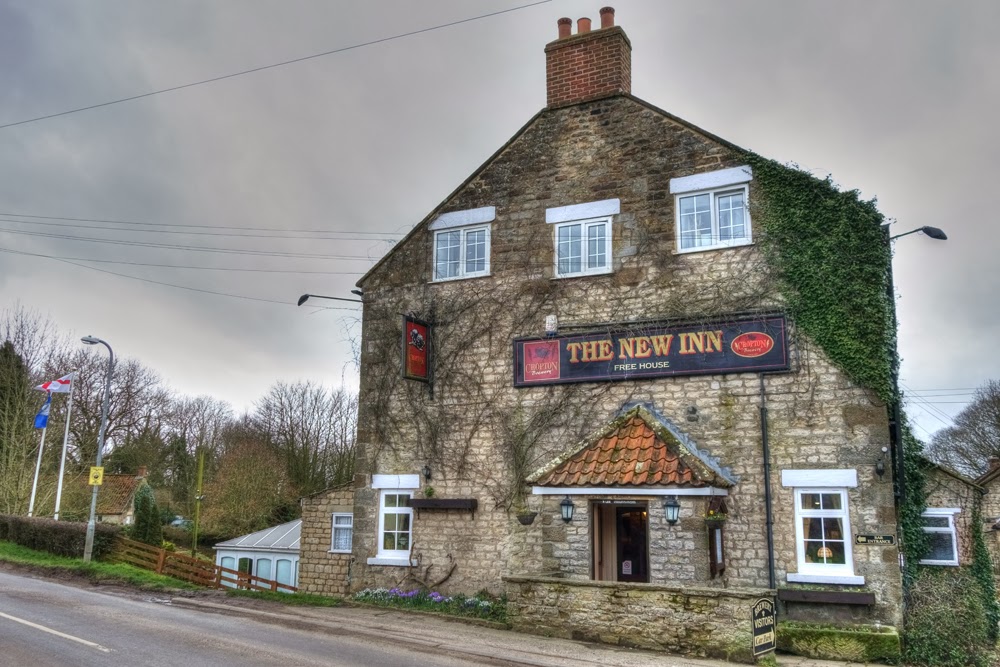 This was the part of the walk I was most interested in!  The New Inn at Cropton is a small, family owned inn which provides good food, accommodation and has its own brewery at the bottom of the garden.  It was the perfect halfway point for this walk and we eagerly left our boots by the back door (hiding them under a discarded Christmas tree...you can't be too careful!) and went in search of refreshment.  Even though the place was packed to capacity (standing room only), we were served very quickly with a pint of their fantastic Yorkshire Blackout (a dark porter) and were assured if we ordered sandwiches we wouldn't have to wait very long.  In view of the fact that it was very hot and crowded, and I was a bit edgy at the prospect of someone making off with our boots (you never know!) we opted to eat outdoors.
It was surprisingly sheltered in the beer garden and, as promised, our food arrived very quickly, but not before we'd had the chance to order a second pint of Yorkshire Blackout.  This beer was really so good we are now seriously considering spending a night at the New Inn, just to be able to savour a few pints in comfort! 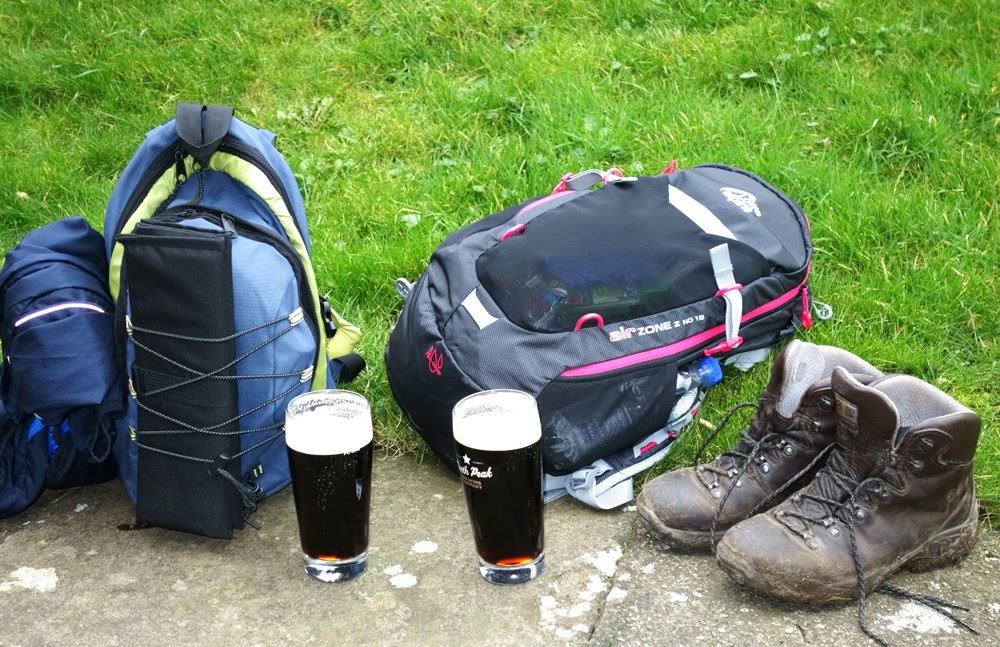 As we drained the last drop of beer from our glasses, a few gentle spots of rain began to fall and so, having a further four miles to walk, we set off promptly in the direction of Lastingham.  At this point our actual route deviated from the one I had originally planned .  Instead of venturing out onto the open moorland for a while, we decided to make our way back to Hutton-le-Hole along the reasonably quiet country roads. 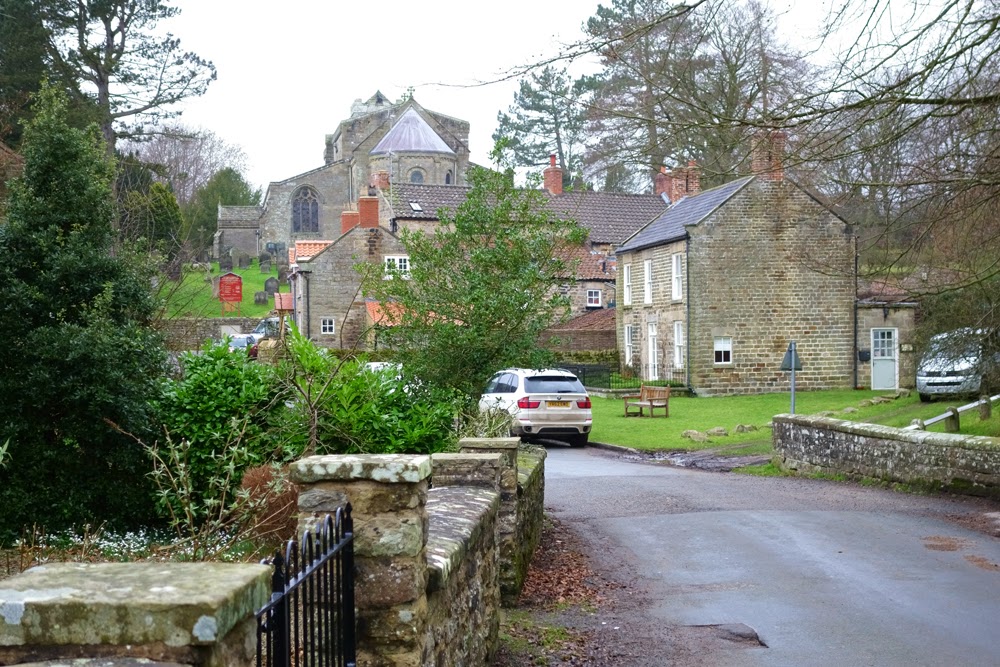 In Lastingham we passed by the Church of St Mary - the most visited of all moorland churches.  Founded circa 654 AD by Saint Cedd, the existing church was built in the 11th century and is famous for its unique Norman crypt.
It was drizzling steadily as we passed through Lastingham and so we decided not to stop but to carry on for the final couple of miles back to Hutton-le-Hole.  I managed a couple of quick and drab photos as we tramped on by. 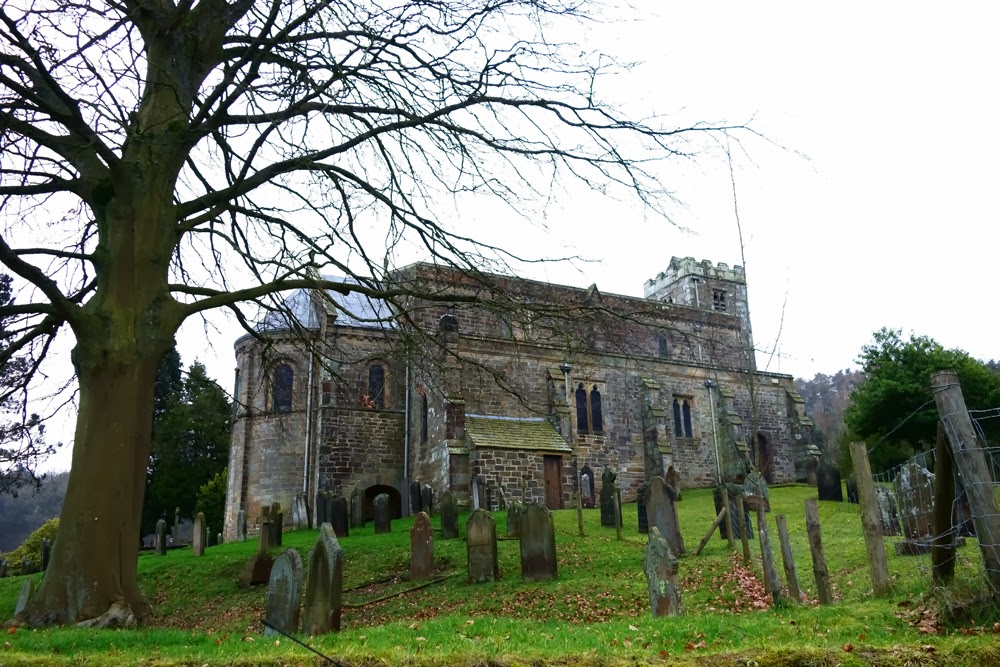 This is definitely a walk to undertake again, in the summer, when the ground underfoot is firm and the hours of daylight longer, allowing time to at least visit the churches at Appleton-le-Moors and Lastingham and possibly stay a while longer in the beer garden of the New Inn.

The route is fairly straightforward, should anyone wish to follow in our (muddy) footsteps. 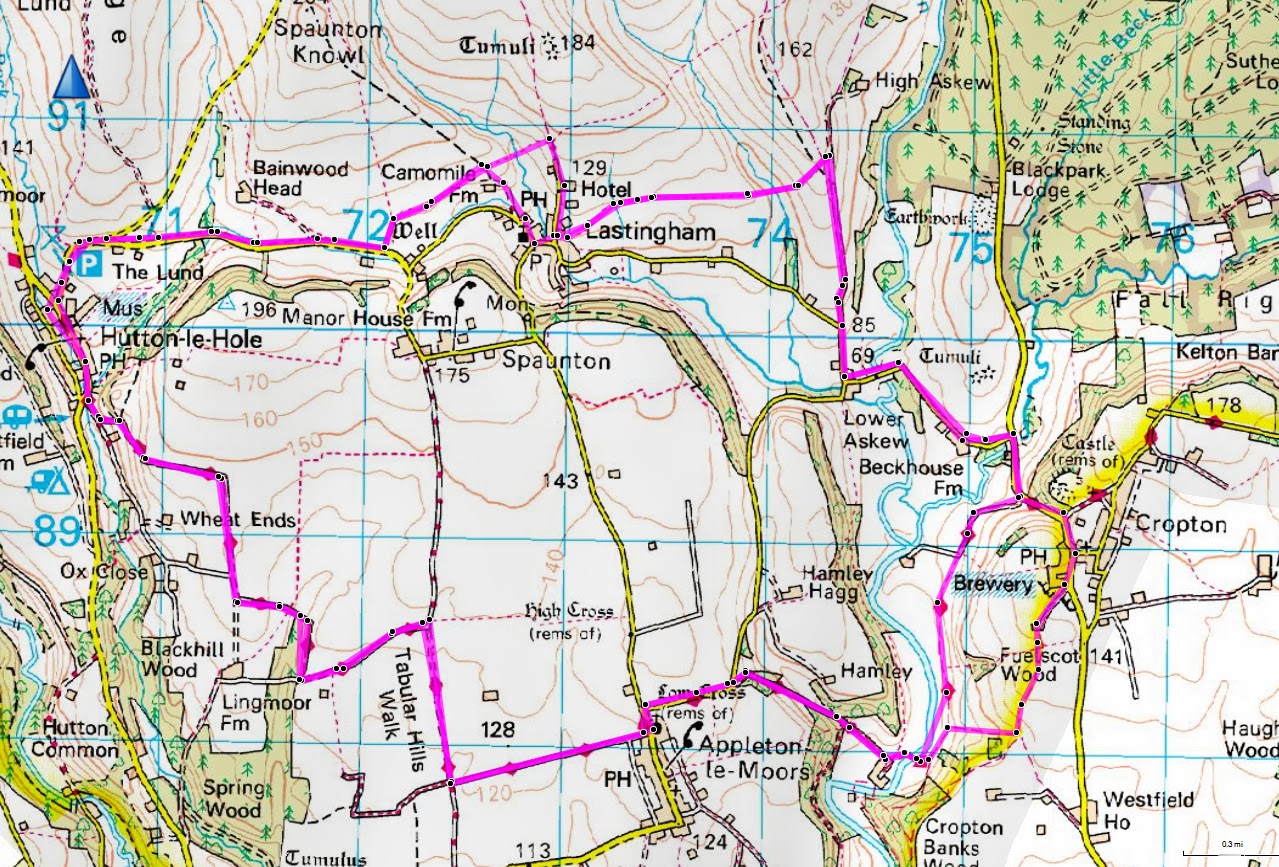