This is the second article about our plans to walk the Yorkshire Wolds Way National Trail later this year.  Having plotted out an itinerary and booked our accommodation (see Part One), it's now time to take a look at what we will need to wear, work out how much we can carry and decide whether the rucksacks and footwear we already have will be adequate. 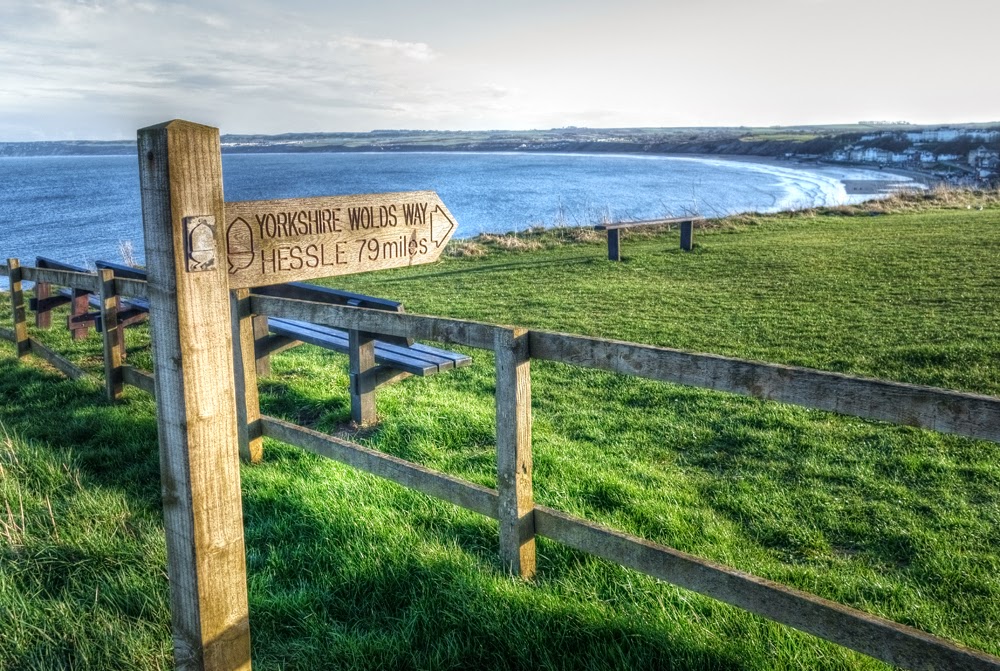 I once read somewhere that  80% of what's found in a rucksack could have been left behind and the 20% that's left behind is sure to be needed.  There's definitely some truth in that, but joking aside, having looked at the map for the Wolds Way, I believe there are only three locations throughout the whole 79 miles where supplies can be purchased, and one of them is just a village petrol station.

When it comes to packing for any trip, be that for a fortnight or just one night away, I follow the same principle every time.  It's always worked for me and, to date, I've rarely forgotten anything.  My packing routine dates back to the days when I used to regularly go camping.  A time when the packing list didn't just include clothing but items like pots, pans, bedding, gas stoves...virtually everything including the kitchen sink (or rather a washing up bowl).  It's a fairly straightforward system, which simply entails getting a note book, thinking my way through an entire trip and listing what I think will be needed.  The same principle applies to every trip I make.  I envisage every activity, work out what I'll need, make a list then tick items off as I pack.  And I keep my notebooks, amending the entries to add things I'd missed or cross out items that weren't actually needed, so the next time I undertake a similar trip it's even easier.

For our Wolds Way walk what we'll need is fairly basic.  For starters there's clothing for each day which will consist of a short sleeved base layer and trousers in lightweight, fast-drying/wicking fabric.  In addition to this we'll need a very lightweight micro fleece, waterproof coat and trousers and (essential) a clean pair of walking socks for each day.  The correct socks, as I see it, are probably the most important piece of kit, after the boots or shoes.  A couple of pairs of lightweight socks and some light shoes will also be packed - because I don't intend going for an evening meal in bare feet or dirty walking boots!  Then there's toiletries which can be purchased in the miniature travel sizes (that is, those items I haven't already purloined from hotels).  A basic first aid kit is a must - plasters, blister plasters, Paracetamol, sting relief cream, antiseptic cream - as are water bottles.  Navigational aids will consist of OS maps and GPS, plus I will also have a mobile phone, charger, camera, spare battery and memory cards.  Items I would like to take but will have to leave behind include a hairdryer (most places can lend you one anyway) and (male readers will not understand why this is such a sacrifice) hair straighteners (I just hope it isn't too humid this time).

Once I'd gathered together everything we already own from the above list and laid it all out on the bed, it quickly became apparent that our current rucksacks were inadequate.  The largest I owned had a capacity of 28 litres, which is technically what's known as a daypack, albeit a larger than average one.  By leaving out a couple of items of clothing and cramming everything down tightly I could just fit everything from my list into the rucksack, but then when I tried it on it was very uncomfortable indeed.  Just walking downstairs and to the bottom of the garden and back was a chore, so it was impossible to imagine carrying it for 15 miles a day.  I decided I needed to invest in something fit for purpose. 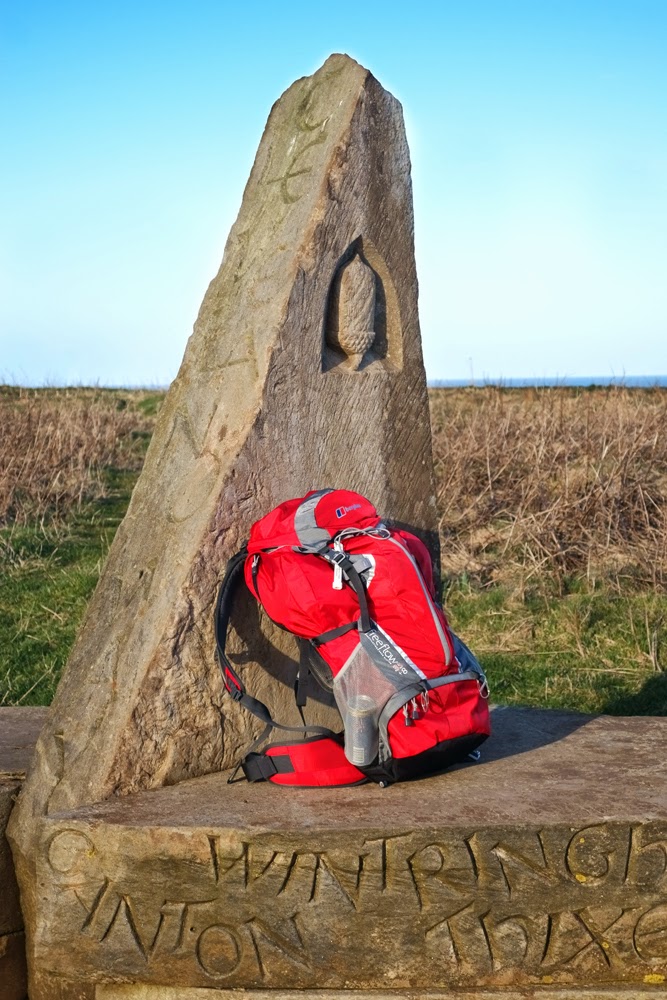 This will be our finishing point (at Filey in North Yorkshire)

Before we set off to visit our nearest large outdoor gear retailer I had a good long think about what other items I might need to buy.  And my thoughts immediately turned to footwear.  Memories of our previous attempt to walk the Wolds Way (17 years ago) are still all too clear.  We had set off in a heat wave, the first few miles being through woodland with high humidity, resulting in wet feet and blisters on our very first day.    The leather boots I owned back then had not been particularly breathable and my thick socks had done a great job of retaining moisture.  It was not only very uncomfortable, it also completely scuppered our walk and we had been forced to quit after walking 50 of the 79 miles.  I have no intention of letting this happen again.  Perhaps, I reasoned, I should not be walking in boots but instead should think about investing in a decent pair of shoes.  After all, the Wolds Way doesn't involve any scrambling over rocks or wading through streams.  As long distance paths go it's fairly gentle, so the boots I wear for moorland walks and Lakeland climbs are maybe just too sturdy and heavy.

These days the simple activity of walking (like most leisure activities and hobbies) has been hammered by marketing hype.  A quick look through a walking magazine or an outdoor retailer's catalogue and your head will soon be reeling with options you may not have considered before, such as "Pertex shield", "Vibram soles", "Polartec" and the like.    And then there's what appears, on the face of it, to be the issue of brand name snobbery.  The wearing of clothing with logos and names clearly emblazoned for all to see means you have a pretty good idea what someone has paid for their gear.  "Fjall Raven?  Ooh...expensive!" or "Mountain Warehouse?  Really?"  Hands up.  I'm guilty of this too, to a certain extent.  I have been known to position the rucksack strap to cover up the "Regatta" label on a base layer, but move it down a touch so as to proudly display Jack Wolfskin's pawprint.  Sad, I know.  But I suspect I'm not the only one.  It's what the manufacturers want us to do - to advertise their gear for them.  Vanity aside though, I do believe in the old maxim "you get what you pay for" and, having previously fallen foul of attempting a long walk without all the "tech", I was willing to splash out on all the "Keprotec",  "Polygiene" and "Contagrip" I could get my hands on.

Now don't get me wrong.  I'm not knocking the budget brands at all, especially not for clothing such as trousers and base layers.  But when it comes to what I consider to be the crucial bits of kit - the shoes, socks and rucksacks - I believe it's worth investing a little extra.  And for those three particular items I have my own favourite brands - Scarpa, Bridgedale and Lowe Alpine.

Having tried on practically every pair of shoes in my local Go Outdoors I finally decided on a pair of Scarpa Breeze GTX (seriously.....GTX!) which look somewhat like a trainer but have those all important Vibram soles and are so comfortable straight out of the box that I don't think they will need any breaking in.  Naturally though I won't leave that to chance and will do a good few walks in them before embarking on a journey of 79 miles.  To complete the lightweight option I invested in a few pairs of Bridgedale's "Trail Diva" socks which are designed for summer walking.  And finally, the rucksack I chose was Lowe Alpine's Kongur 65-75, which is to say it has a capacity of 65 litres expandable by letting out a few straps to a whopping 75 litres.  I was able to try this on in the shop, filled and weighted, and by virtue of a comfortable, padded waist belt and properly positioned straps, it was much more comfortable than even my smallest (18 litre) daypack.  Of course, the three items I've mentioned are all female-specific in style and design.  Although Tom has yet to find himself a suitable rucksack, he has also gone for a lightweight shoe and sock option with Mammut Treon Low GTX trail shoes and Lorpen Light Hike socks. 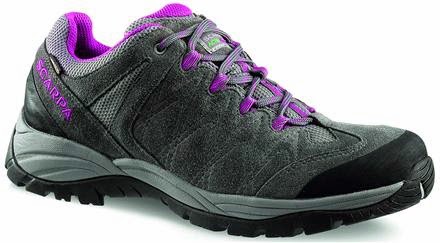 When I first decided to have another go at the Yorkshire Wolds Way I didn't anticipate having to splash out on any extra gear at all.  And although I did wonder whether I'd need to buy a bigger rucksack, I certainly didn't expect I'd be buying extra footwear.  I was mulling this over as I waited in line to pay for my purchases when a display of guidebooks caught my eye.  I picked one up for a closer look right at the very moment the next checkout became free.  Almost absent-mindedly the guidebook was added to my basket.

The Hadrian's Wall Path is an 85 mile national trail crossing the country at one of my very favourite places.  I haven't just bought that rucksack to use once!