Cleveland Hills Weekend - Day One: The Wainstones - May 2014

An unexpected free weekend is something of a rare treat for me.  It's not very often that I have work commitments which are cancelled at the last minute, and especially not over a holiday weekend.  But that's just what happened a couple of days prior to the May Day Bank Holiday and it seemed like too good an opportunity to miss the chance of an impromptu weekend break.  Where to go though?  The Lake District and the Yorkshire Dales, whilst tempting, were out of the question.  Both those National Parks, and in particular the Lakes, are busy all year round but a holiday weekend with a favourable weather forecast meant that finding accommodation would be highly unlikely, if not impossible.  And then there was the unappealing prospect of crowds of people.  My thoughts instantly turned to an interesting pub I'd spotted in the Cleveland Hills, on the western edge of the North York Moors.  To my surprise, one quick phone call later and I had booked accommodation for one night at The Buck Inn, Chop Gate.  How things can change in an instant.  One moment I was facing a weekend at work and the next I found myself contemplating the promise of some great walking, good food and beer.  An altogether much more agreeable prospect, I must say!

The little village of Chop Gate is situated on the B1257 road to Stokesley, 12 miles north of the market town of Helmsley, North Yorkshire.  When I'd made our reservation at the Buck Inn I enquired whether we could park our car early on the day of our  arrival until we checked our bags in later that afternoon and the landlord had readily agreed.  Usually pubs and hotels will let you do this, but it's always advisable (and polite) to check first.  Before heading to Chop Gate though we stopped for a break in Helmsley.  The shops were only just beginning to open and it was much quieter than usual. 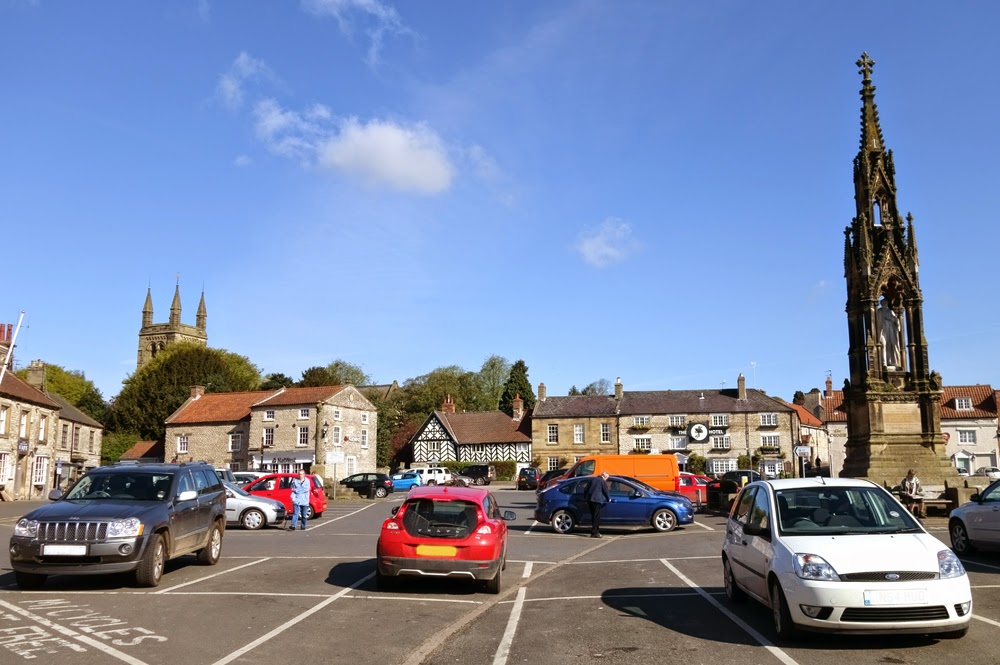 Helmsley is a real honey pot of a town which is often teeming with visitors and very popular with motorcyclists who gather around the memorial to Lord Feversham in the centre of the market square.  Early on a Saturday morning though it's not too difficult to find a parking space and we enjoyed a leg stretch in the warm sunshine before paying a quick visit to Hunter's, a top notch delicatessen, where we put together a packed lunch consisting of some of their delicious sausage rolls and pastries.  A little old fashioned sweet shop provided some extra treats and then we were on the road again for the last, short part of our journey. 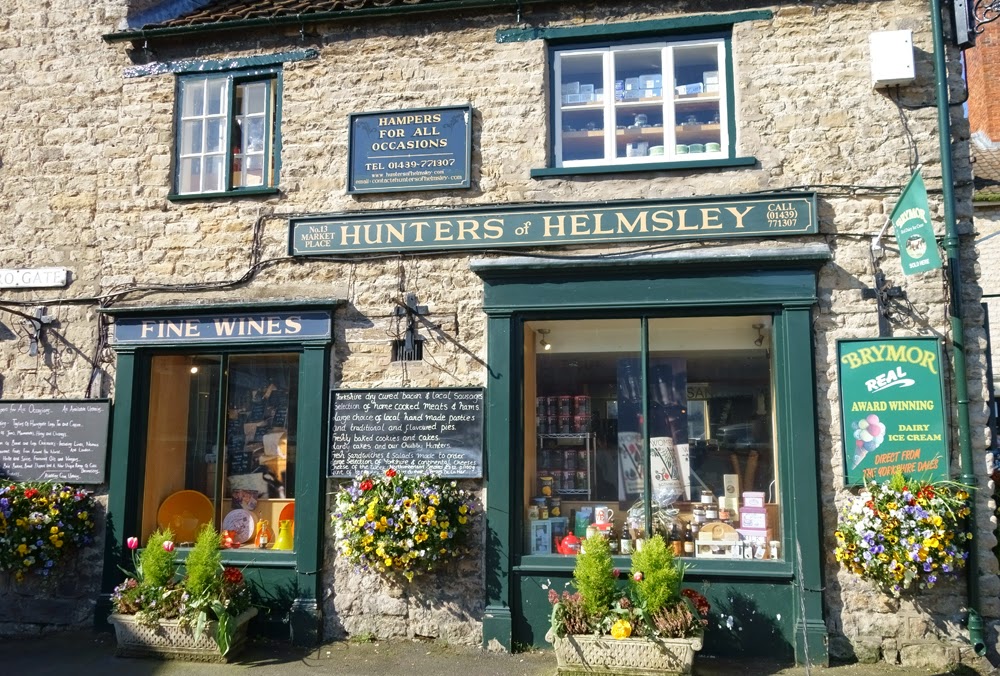 On first sight the pronunciation of Chop Gate would seem to be obvious.  Not so.  In actual fact it is pronounced "Chop Yat",  which translates to "pedlar's gate", "chop" being from the old English word "ceap" meaning to barter and "yat" meaning, believe it or not, "gate".  So, strictly speaking, pronouncing it as it's spelled would be correct...but not with the locals!  Confused?  I was!  Thankfully, no such confusion existed with our base for the weekend, the Buck Inn, which has a spacious and secure car park where we left our car and headed out onto the moors. 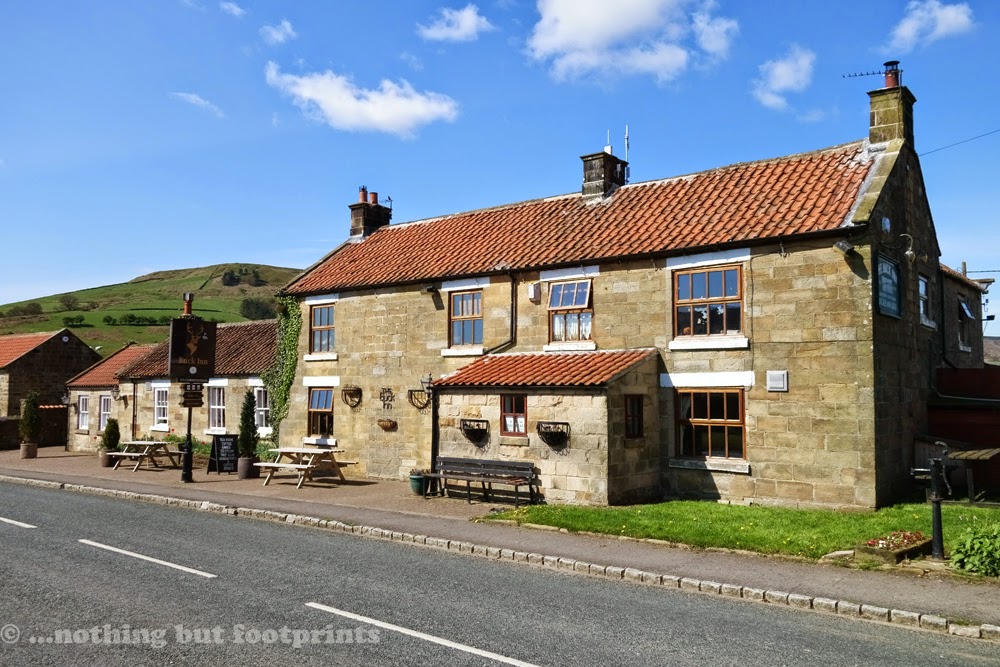 Our walk began along a delightful short section of hollow way which led uphill by the side of a Methodist chapel.   A hollow way is a sunken lane or path which has fallen over time to be significantly lower than the land surrounding it, due to erosion factors such as the flowing of water or usage by traffic, people or animals. 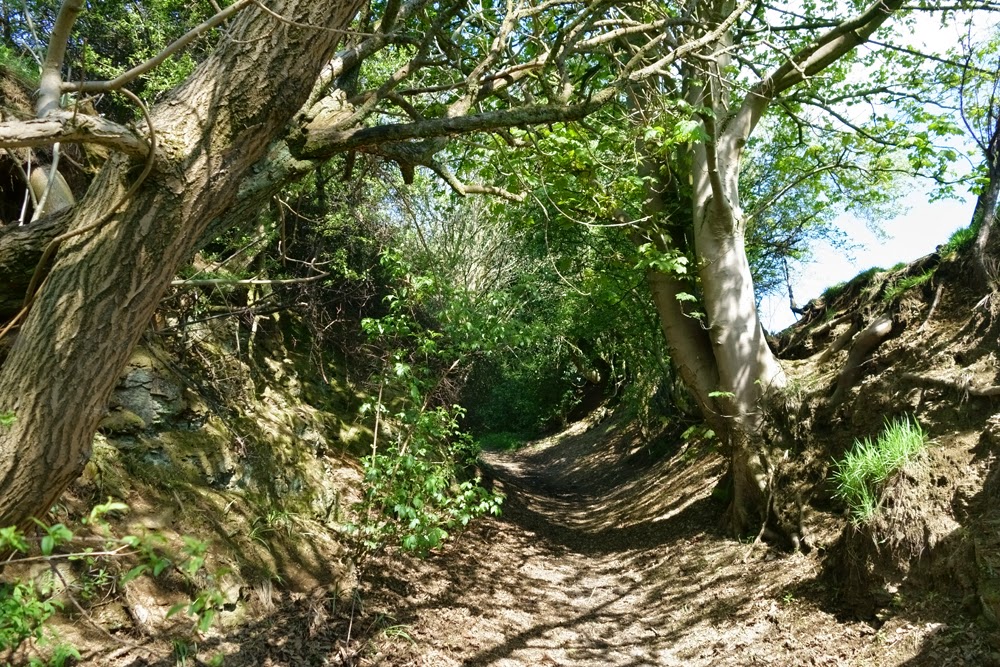 Eventually the hollow way opened up to a pleasant path which climbed steadily up onto the open moorland.  Looking back we were rewarded with a view of Bilsdale.  The view was hazy, looking into the sun, but the road through the valley was clearly picked out, as was the Bilsdale transmitter.  This 314 metres (1,030 feet) high mast is one of the most powerful telecommunications and broadcasting facilities in the UK.  It was constructed in 1971 to bring colour television to Teesside and covers an area from Harrogate and York to the south, Filey and Whitby to the east, Middlesbrough, Darlington, Hartlepool and Sunderland to the north and Barnard Castle to the west.   It also, as we later discovered, provides a useful landmark to help get your bearings out on the moors! 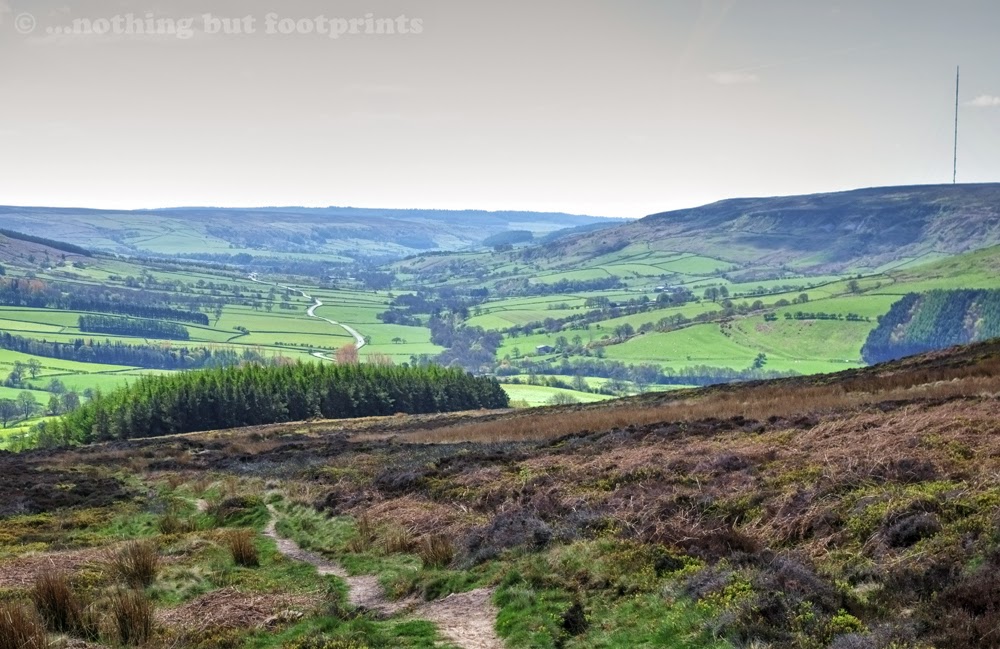 
Our route now took us up onto Cold Moor.  Given the exposed nature of this patch of moorland I'm sure that for a good part of the year its name is entirely appropriate, but as we steadily climbed uphill it was anything but cold.  In fact, it was sweltering.  The sun beat down without the slightest hint of a breeze.  Fleeces were quickly shed and sunglasses and hats brought out of our rucksacks for the first time this year.  And it was at this point we realised that we'd forgotten to bring any sun block lotion.  A basic error for which I paid the price later that day as my arms turned lobster red.  I made a mental note to always have a travel sized sun lotion bottle in my rucksack. 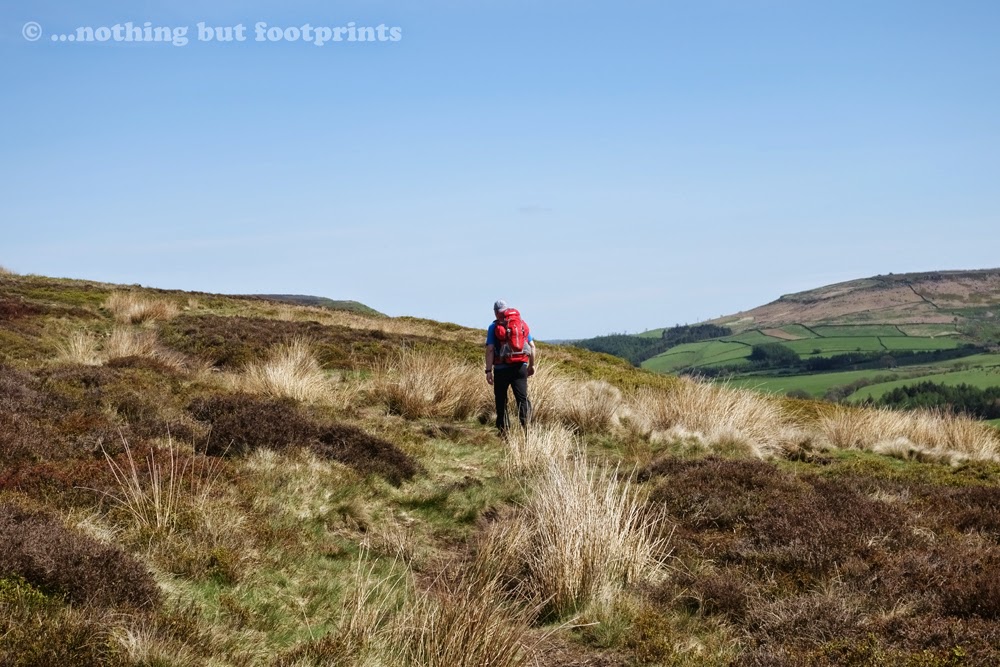 Cold Moor (or, on this occasion perhaps, Hot Moor!)

The path along Cold Moor climbs very gradually and eventually the most glorious views appeared before us as we had our first glimpse of the Tees Valley, looking down the Cleveland plain towards Middlesbrough and across to the iconic landmark of Roseberry Topping, beyond which we caught a glittering hint of the sea. 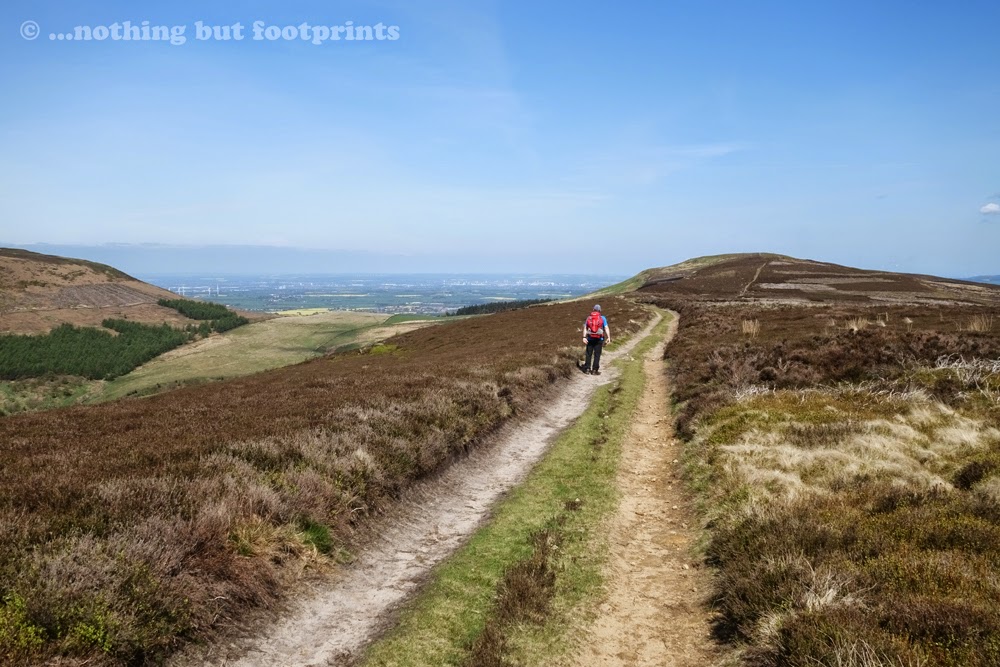 
At 1,049 feet (320 metres) high, Roseberry Topping is a distinctive feature in the landscape, its unusual shape having been caused by a combination of a geological fault and a mining collapse in 1912.  Whilst Roseberry Topping is almost 1,000 feet short of being a mountain, many people still describe it as such and, because of its shape, it has even been nicknamed "Yorkshire's Matterhorn". 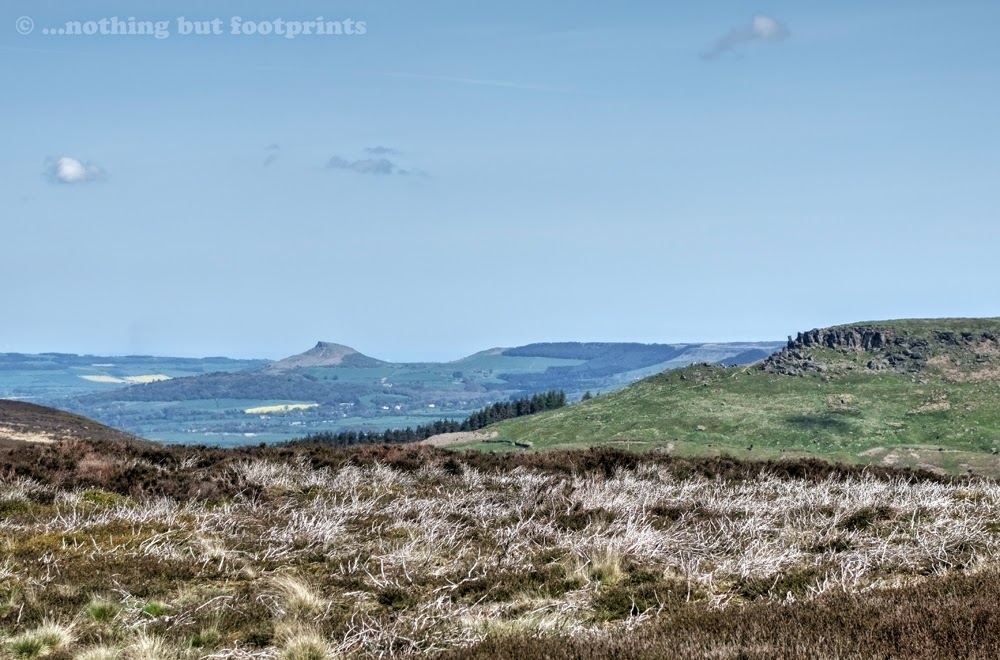 First glimpse of Roseberry Topping and the Wainstones

Also from our elevated position we could see the focal point for this walk - the Wainstones.  In his "Coast to Coast Walk" Alfred Wainwright wrote "you will like the Wainstones" and, even from a distance, I could see that I would agree.  This large rocky outcrop is believed to have been named from the Saxon word "wanian" meaning "to lament" and this may refer to a Danish chieftain who, according to legend, was slain here. 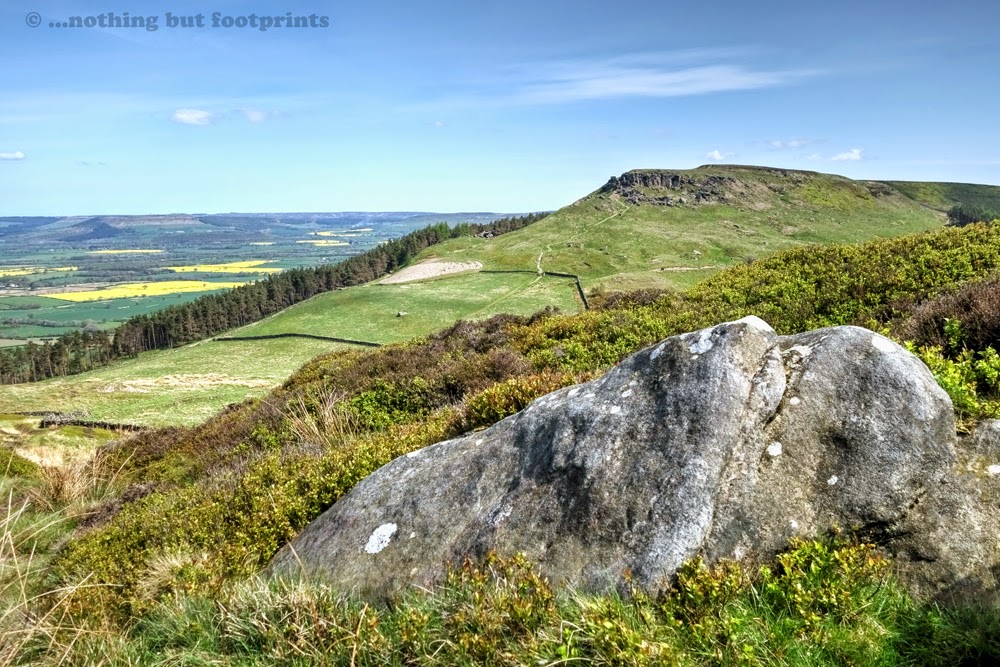 Looking across to the Wainstones from Cold Moor

Before we could begin our ascent of the western edge of Hasty Bank to reach the Wainstones we first had to take a path downhill from Cold Moor, allowing me to stop from time to time as increasingly better photo opportunities arose. 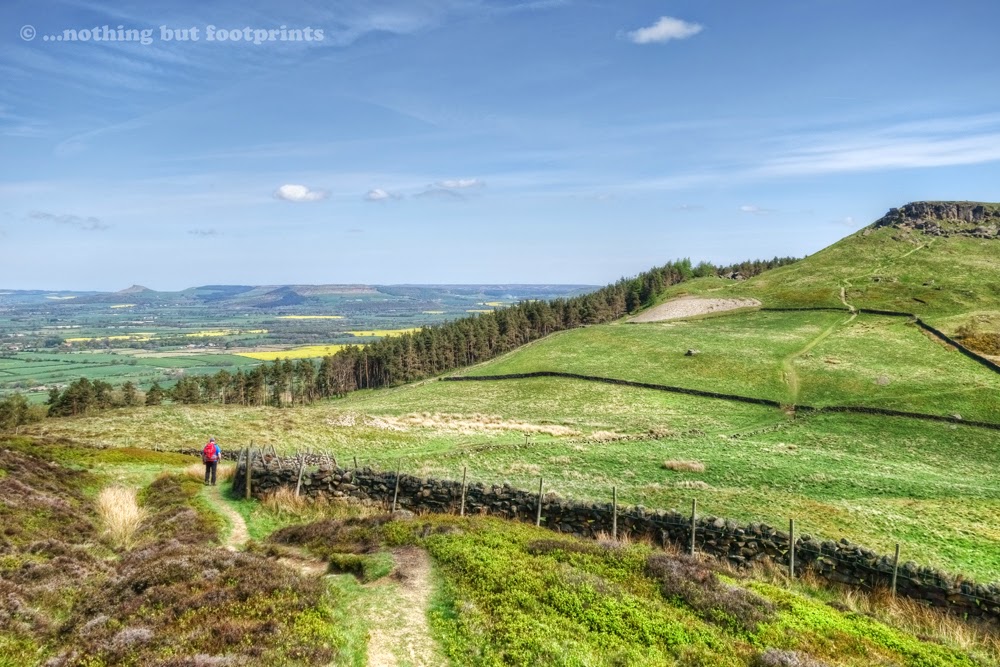 Once at the stones we rested for a while among the rocks and enjoyed our lunch whilst watching climbers on the rock face.  The many different faces of the Wainstones provide climbers with a variety of ascents and the sheltered position makes it a popular place to climb all year round. As we munched on our tasty sausage rolls from Helmsley I realised that "rock face" was quite an apt description.  One of the rocks in particular seemed to resemble one of the famous Easter Island moai.  Nature can be a great sculptor sometimes! 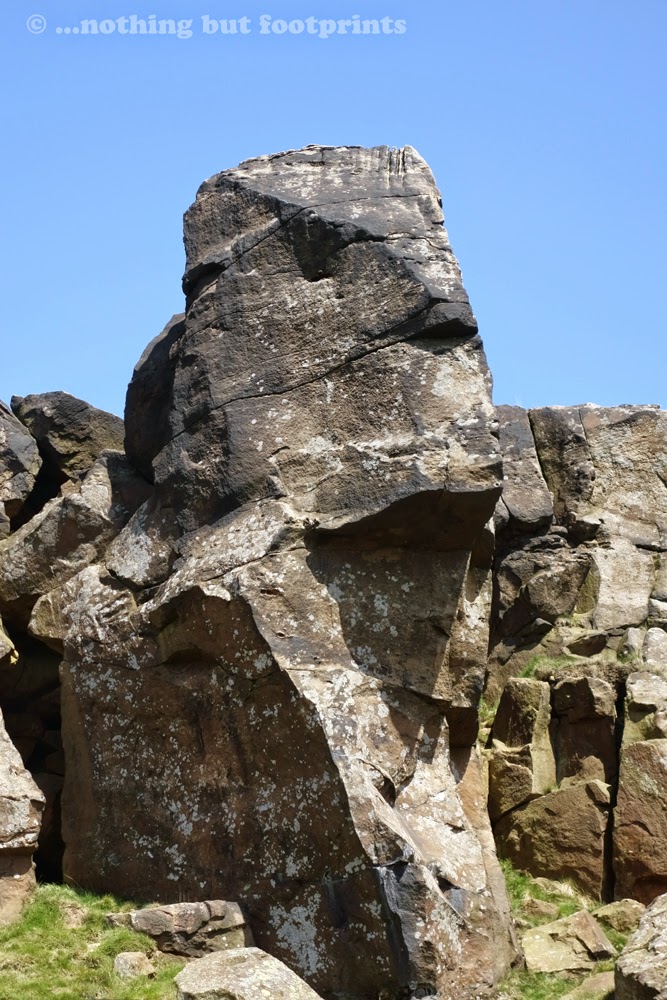 After lunch we enjoyed a little scramble up a short section of the Wainstones followed by a short climb to the top of Hasty Bank.  As we admired the sweeping views I realised that we were now standing on the route of two of the country's finest and most popular long distance paths - the Coast to Coast and the Cleveland Way, which converge as they follow the line of the Cleveland Hills from Osmotherley in the west to Bloworth Crossing in the east. 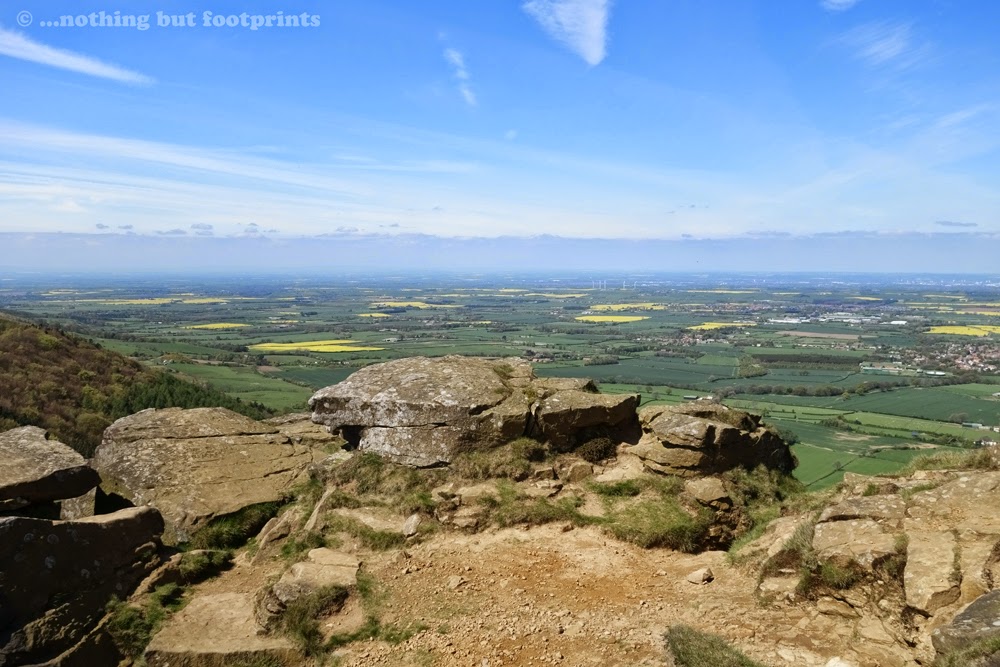 View from the top of the Wainstones

Resuming our walk, we continued along Hasty Bank.  The route here is not only very clearly defined, it's also nicely paved and, judging by the number of people we passed along just this short section, the need for a permanent, hard-wearing surface was all too apparent. 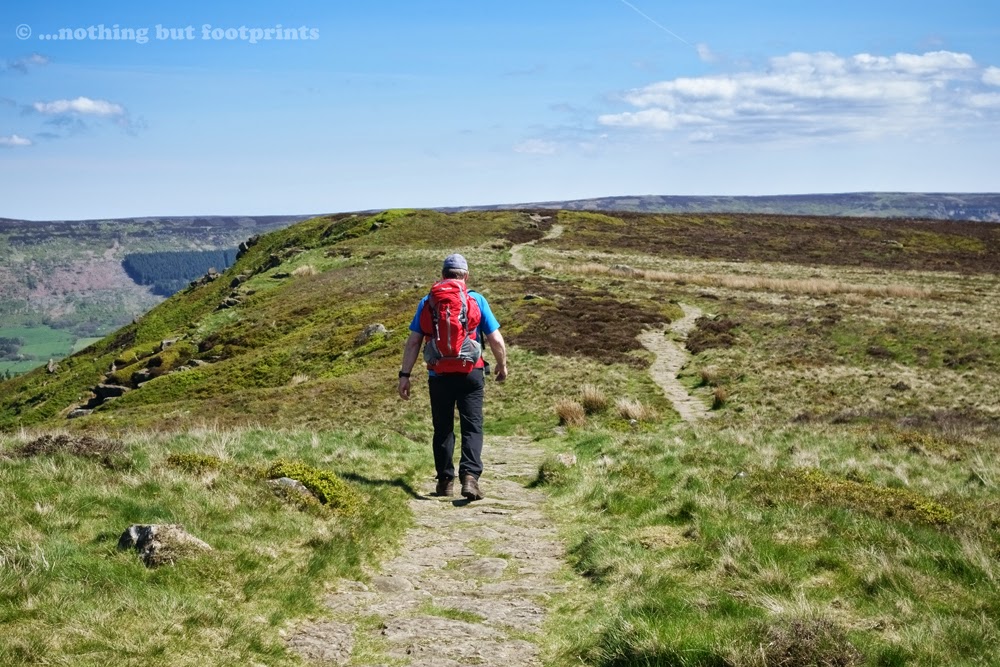 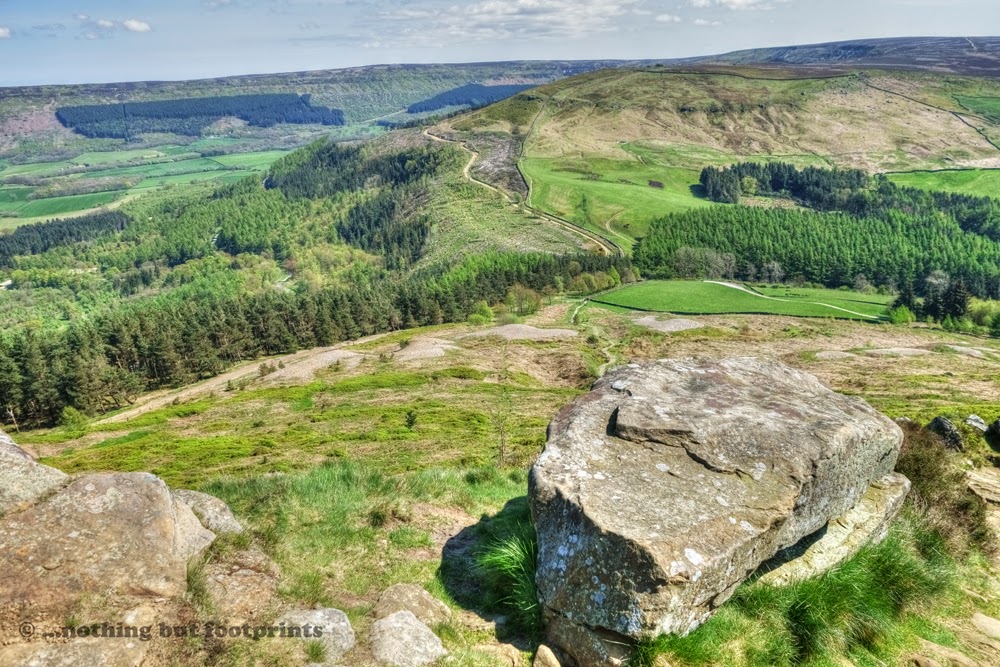 At the foot of Hasty Bank we crossed over the B1257 road which was busy with motorcycles speeding noisily into Bilsdale.  I have to say, although I don't have anything against them, the noise was quite intrusive as the bikers accelerated uphill.  Clay Bank is a popular place for dramatic views and many people park here to enjoy a walk or a picnic.  After a short but fairly steep climb, we stopped to take a look back at Hasty Bank and the route we had taken so far before climbing up further onto the edge of Urra Moor. 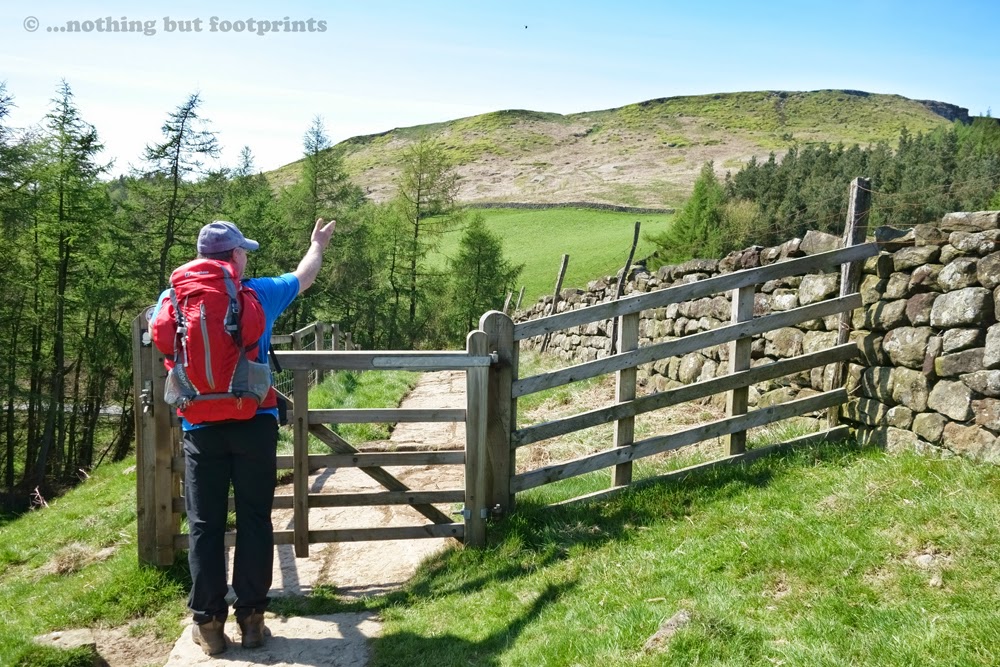 Looking back to Hasty Bank

Turning off the Cleveland Way, we headed across the moorland, back in the direction of Chop Gate.  After a short distance a standing stone caught my attention and, as always, I had to go and investigate. This one was clearly a boundary stone, marking a boundary of the estate belonging to Lord Feversham of Duncombe Park, Helmsley, delineated in the year 1848. 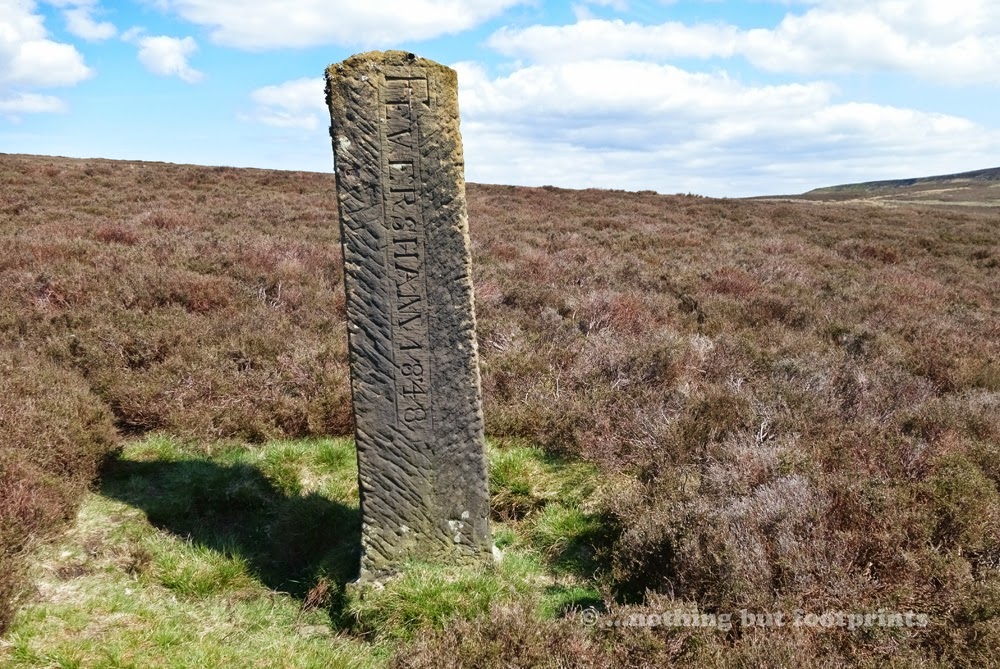 Our route followed the edge of Urra Moor, providing us with a view of the full length of Hasty Bank.  By now the heat was beginning to take its toll and we quickened our pace along the ridge to an outcrop known as Medd Cragg where we descended into the village of Seave Green.   A short walk along the  footpath by the B1257 and we were back in Chop Gate.  The Buck Inn was a welcome sight indeed and a cold glass of beer even more so! 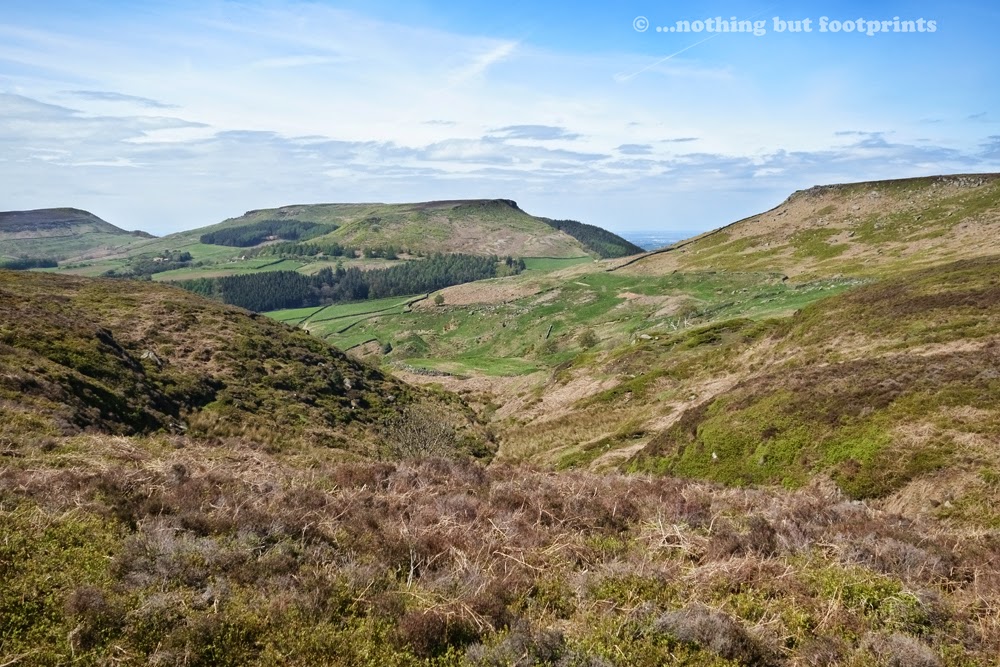 Hasty Bank from the edge of Urra Moor

This had been a highly enjoyable walk with a satisfying number of ascents and descents.  And we had the prospect of a similar walk to look forward to the very next day, which will be the subject of my next blog.  For now though, I'd just like to give a special mention to the Buck Inn, Chop Gate, which turned out to be a truly super place for a short break.  The accommodation was very comfortable, the food was lovely, the selection of beers (and single malts) excellent and the owners very friendly and helpful.  Whilst filling out a form to select our breakfast options I noticed that the landlord provides transport for Coast to Coast and Cleveland Way walkers to and from the Clay Bank car park, making the Buck Inn an ideal accommodation option for both these long distance routes.  I for one can certainly recommend it!

From the main road in Chop Gate turn left onto Raisdale Road, which is signposted to Carlton-in-Cleveland.  A public footpath sign can be found at the side of the Methodist Church leading up a holloway which climbs uphill and eventually emerges onto Cold Moor.  This path follows a direct line all the way to join the Cleveland Way at Hasty Bank where a right turn takes you to the Wainstones.  From here follow the Cleveland Way down to Clay Bank, taking care when crossing the B1257 and climbing uphill onto Urra Moor.  At the top of the hill follow the public bridleway sign and take the path which leads around the edge of Urra Moor , following it round to Medd Cragg.  From here a footpath leads downhill to the village of Seave Green from where a left turn onto the main road will take you back to Chop Gate.  This walk is approximately 8 miles in length. 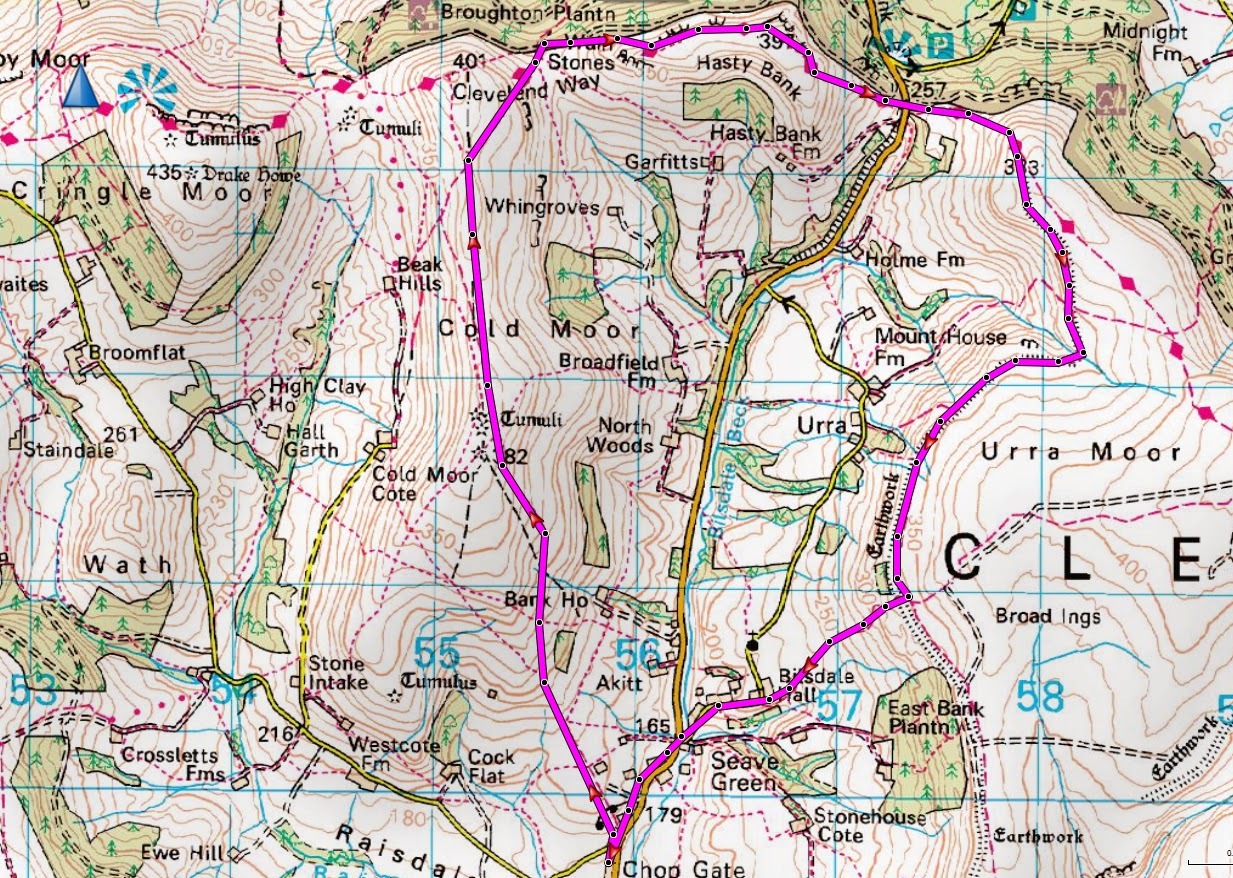 Coming soon.... Day 2 of our Cleveland Hills weekend took us up onto Cold Moor once more, but this time we turned left on the Cleveland Way to explore in the opposite direction.