It was the morning after Midsummer's Day, the weather was fair and I awoke very early feeling eager to go for a nice long walk.  A quick look at my list entitled "Walks I would like to do" and I instantly knew which one I favoured.  This was to be a 12 mile circuit over high moorland at the very northernmost edge of the North York Moors, visiting a couple of well-known landmarks along the way.

It was still quite early and the roads were quiet as we drove out to the little Cleveland market town of Guisborough.  This being a Sunday, parking was free and unlimited along the main street where we left our car.  Before we could get up onto the higher ground, however, we first of all had to navigate our way out of the town centre.  After a couple of wrong turns we eventually found ourselves on a dismantled railway line which skirted the southern edge of the town.  This was the line of the former Middlesbrough and Guisborough railway which closed in 1964 and is now known as the Guisborough Greenway. 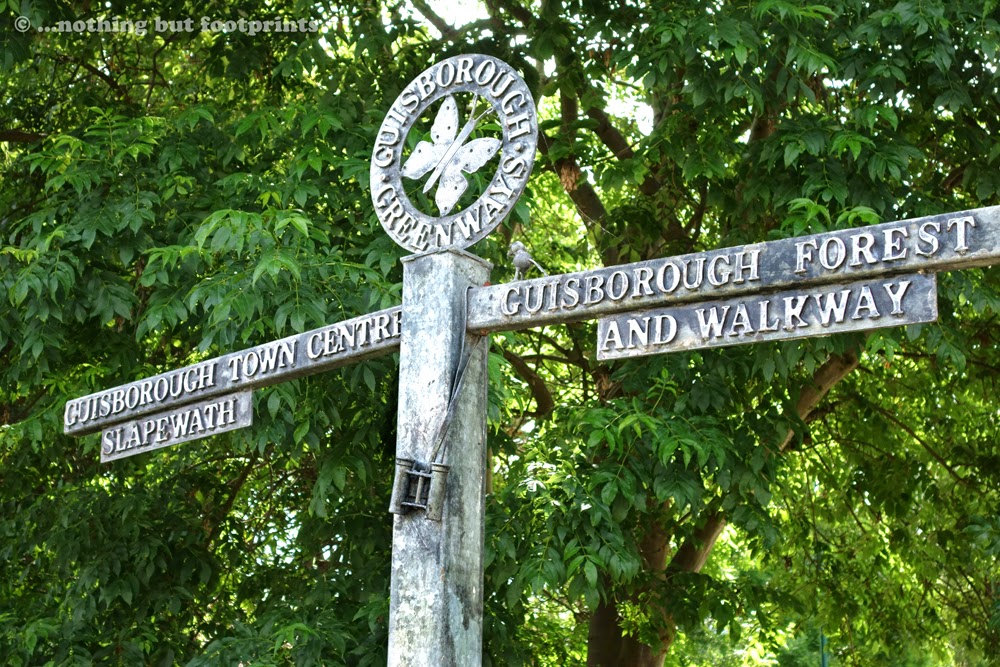 As with many former railway lines, the Guisborough Greenway is an excellent footpath and cycle track which certainly lives up to its name in sections where the cinder track seems to be like a leafy tunnel. 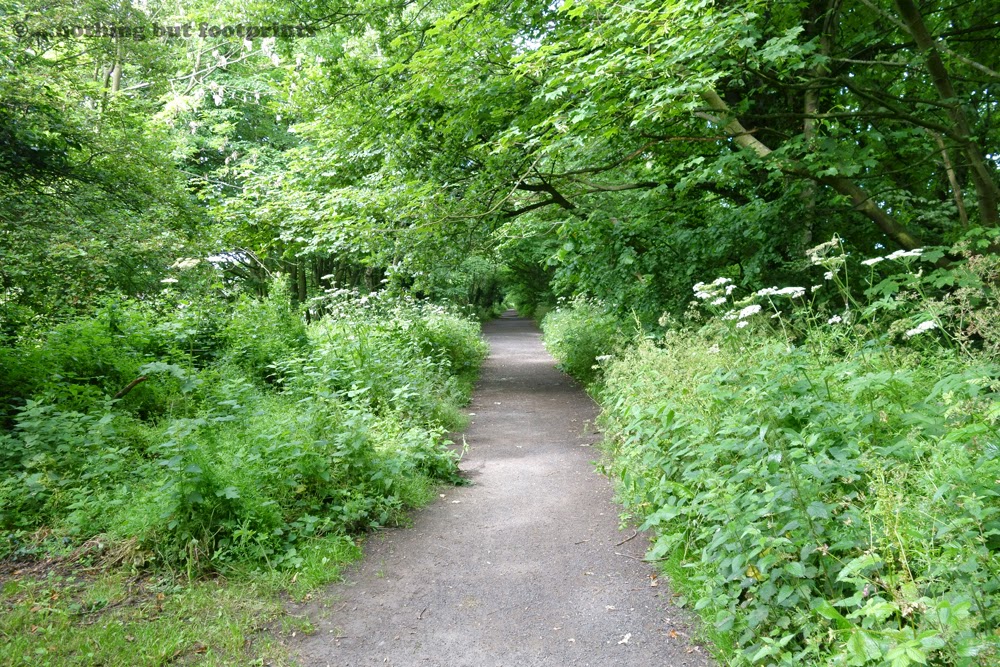 After a mile or so the track opened up to a country lane which led us to Hutton Village, a small settlement built to house miners and agricultural workers.  Judging by the number of cars parked along this quiet lane, this is a popular starting point for walks and cycle rides through the nearby woods and moors.  Just before entering the village we found the path we were to follow uphill through Hutton Lowcross Woods.  The day was becoming rather hot as we climbed up through the woodland, pausing for a while to enjoy the shade and to admire the wild foxgloves growing among the trees along the banks. 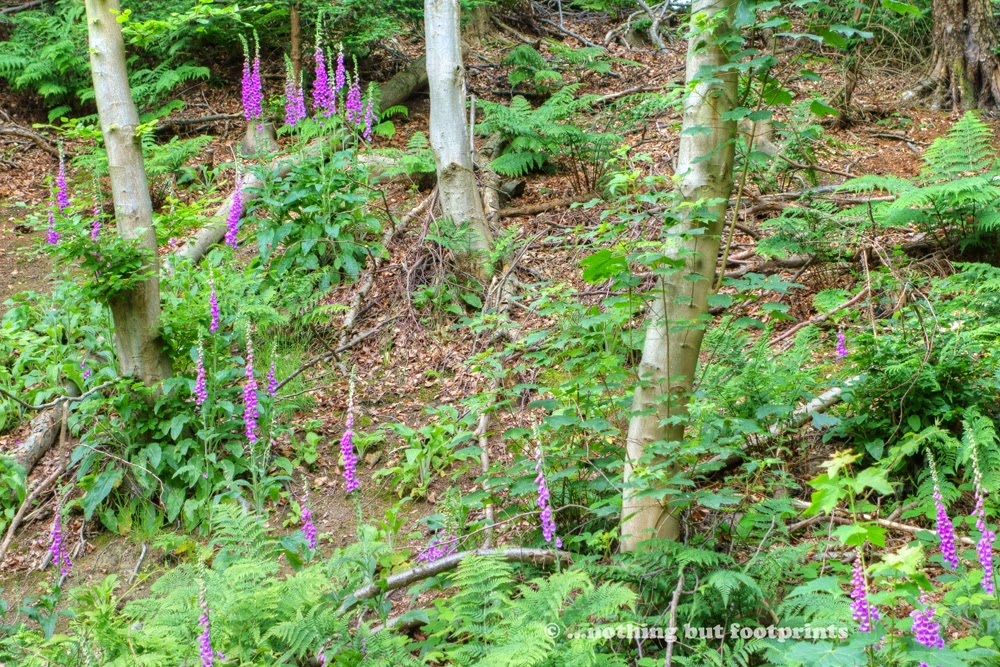 As the path climbed steadily uphill we eventually left the woods behind and emerged onto the open moorland of Great Ayton Moor.  Here we enjoyed a lovely view back along our route, over the town of Guisborough and beyond to the sea.   The area was obviously very popular with cyclists as they seemed to suddenly appear from all directions, up the hill, down the hill and across our path into the woods and over the moors. 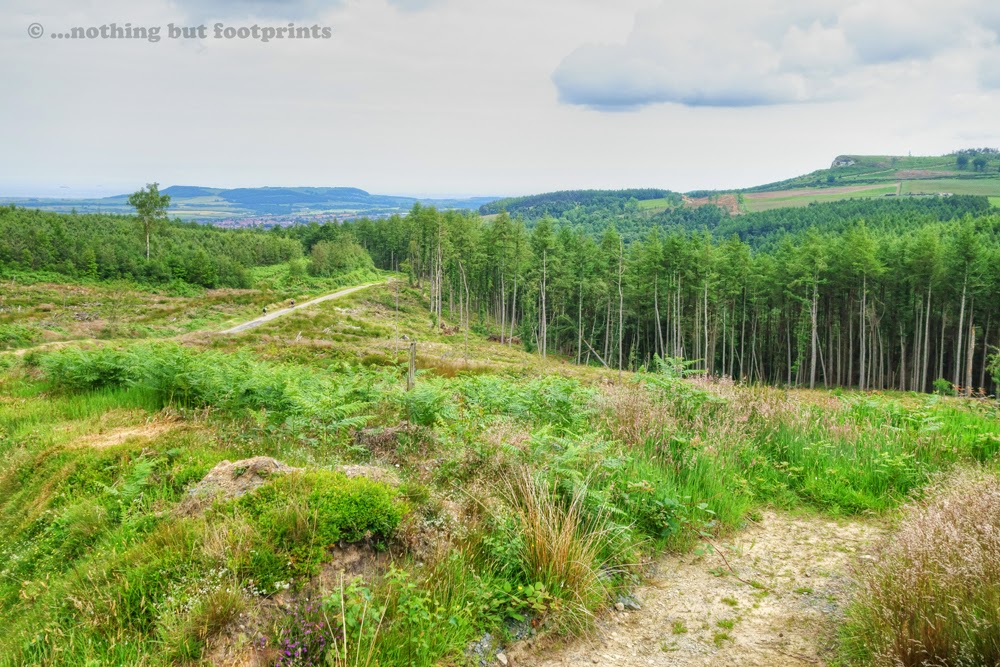 The view looking back

A short distance along the moors and we found ourselves once again on the Cleveland Way - a national trail we regularly encounter on sections of our moorland walks.  Today we followed it for just a few yards before it turned off to head north-eastwards on its way to meet the sea at Saltburn.  Our route from this point was along a dusty moorland track at the side of which the heather was just starting to show early signs of coming into bloom. 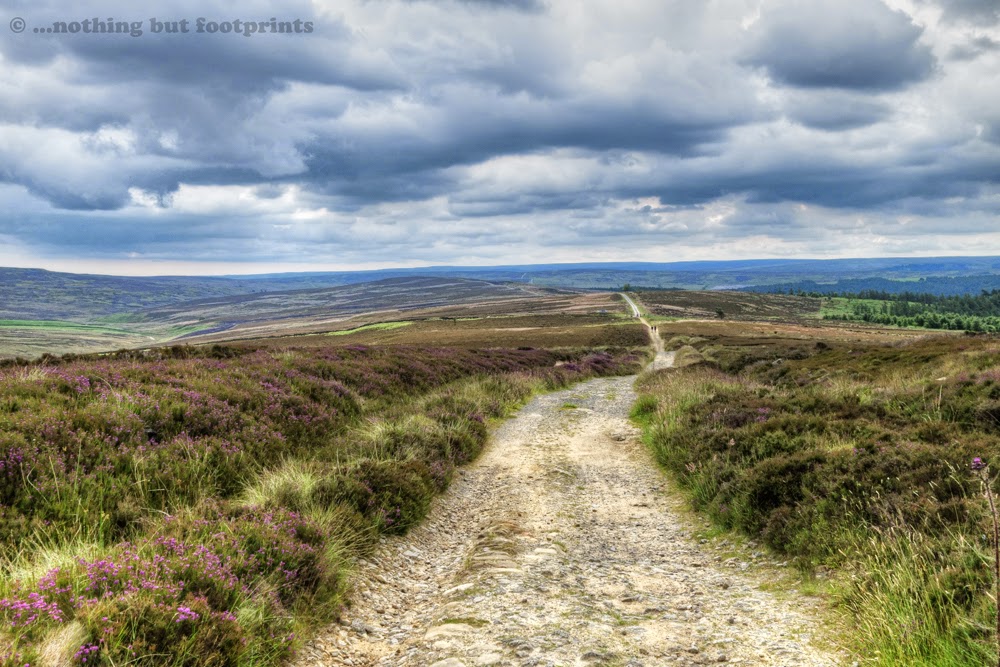 The heather begins to bloom

The day was rather overcast now, but muggy and hot with occasional bursts of sunlight through the clouds.  Across a valley we caught a glimpse of the monument which was to be our first destination and at this point our route took us sharply downhill along a deeply rutted track and then steeply uphill to once again meet up with the Cleveland Way just above the village of Kildale. 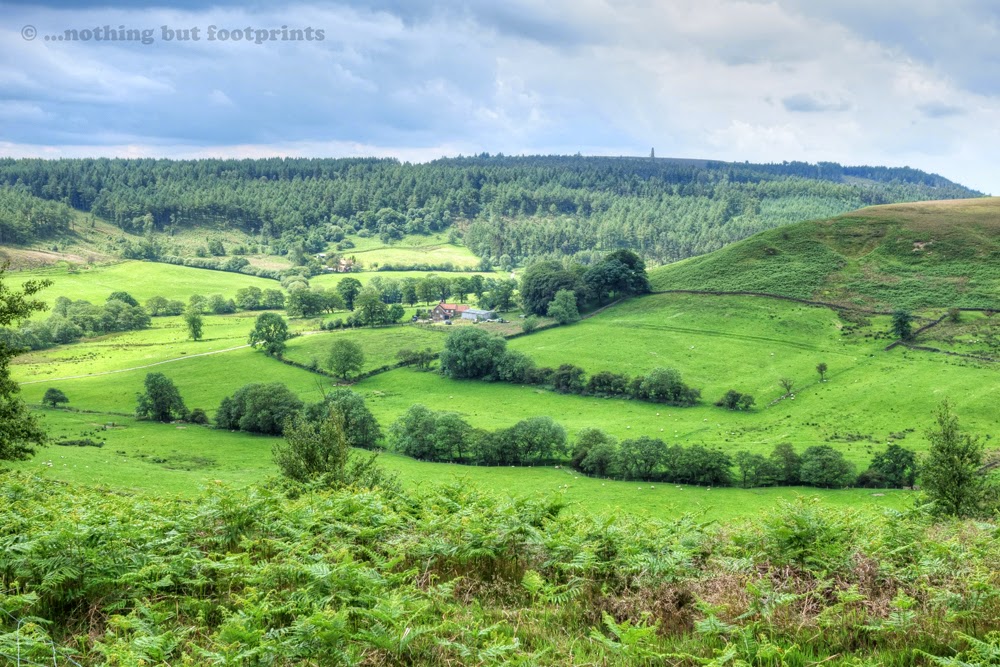 There then followed a very pleasant stretch of level walking through woodland at Coates Moor, following the Cleveland Way until it emerged out of the woods and climbed up to the top of Easby Moor and the Captain Cook Monument.  In the distance, almost peering over the top of the hill, we also got our first sight of Roseberry Topping, silhouetted against the skyline. 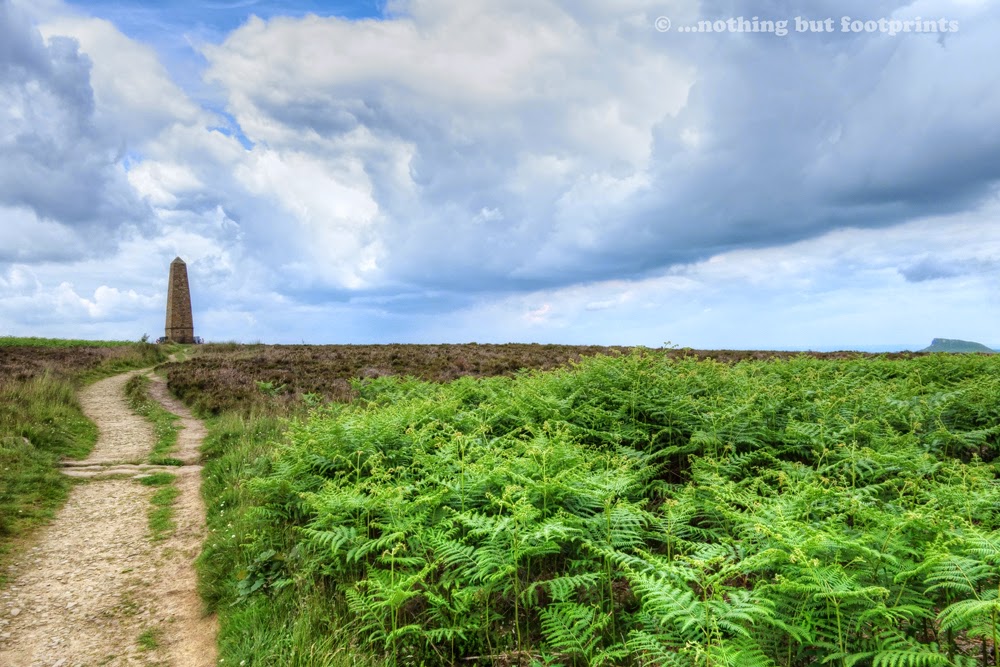 The Captain Cook Monument is a 51 feet high obelisk, made from local sandstone, which was erected in 1827 at the top of Easby Moor.  From this point, high up on the moors, it can be seen for miles around and its position is close to the village of Great Ayton, which is where Captain Cook had his boyhood home.  On the side of the monument facing out over the Cleveland plain there is a plaque with an inscription which reads as follows:

In memory of the celebrated circumnavigator Captain James Cook F.R.S. A man of nautical  knowledge inferior to none, in zeal, prudence and energy, superior to most. Regardless of  danger he opened an intercourse with the Friendly Isles and other parts of the Southern  Hemisphere. He was born at Marton Oct. 27th 1728 and massacred at Owythee Feb. 14th  1779 to the inexpressible grief of his countrymen. While the art of navigation shall be  cultivated among men, whilst the spirit of enterprise, commerce and philanthropy shall  animate the sons of Britain, while it shall be deemed the honour of a Christian Nation to  spread civilisation and the blessings of the Christian faith among pagan and savage tribes, so  long will the name of Captain Cook stand out amongst the most celebrated and most  admired benefactors of the human race. 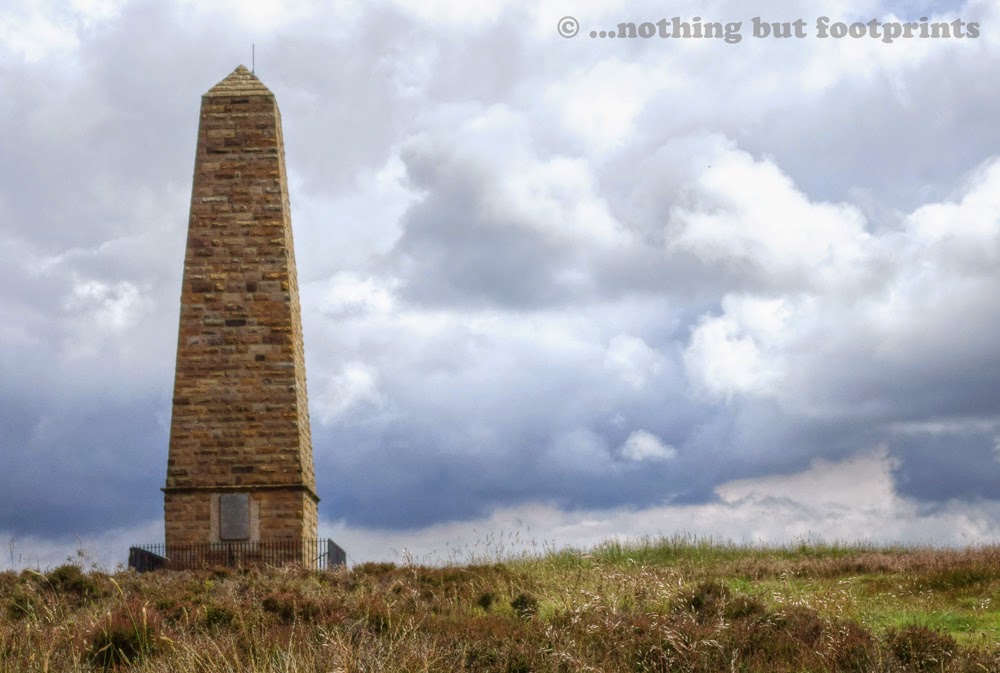 The Captain Cook Monument
We sat for a while, below the monument on the edge of the escarpment, enjoying the view whilst eating our packed lunch.  From this vantage point we could pick out familiar landscape features along the line of the Cleveland Hills, such as the Wainstones and Carlton Bank.  We could also see rain clouds approaching from the direction of Middlesbrough and so we quickly finished our lunch and set off again to follow the Cleveland Way. 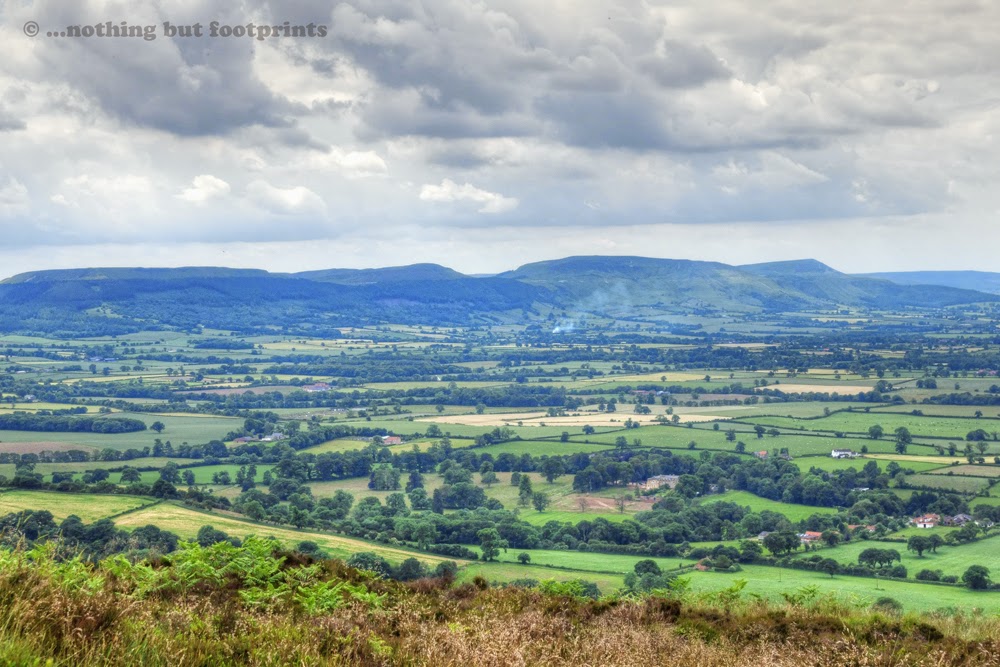 View from the monument

Before long our next landmark destination came fully into view.  Roseberry Topping has a very distinctive shape, caused by a combination of a geological fault and a mining collapse which occurred in 1912.  As we walked downhill from the monument, its Matterhorn-like profile was clearly visible over the top of a nearby coniferous plantation.  Even from this distance we could clearly see the paths leading up the hillside and also the outlines of people gathering on the summit. 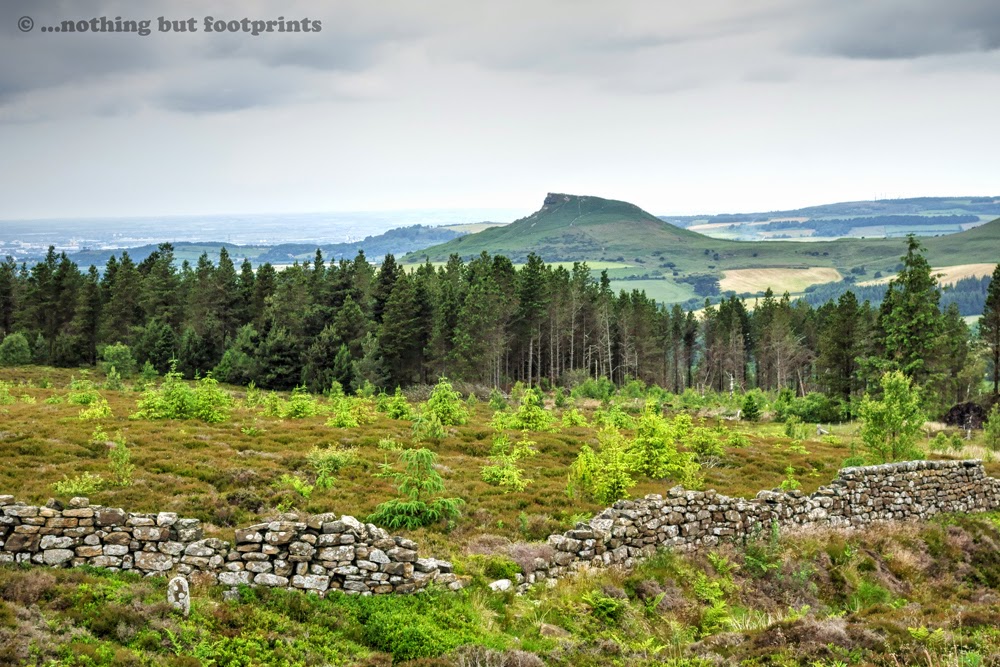 Looking across to Roseberry Topping's distinctive shape
Our route now took us steeply downhill to cross the road to the visitor car park for the Captain Cook Monument, after which we climbed up again onto Great Ayton Moor.  At the top we looked back along the path we'd just followed and we could also see that the threat of rain was going to pass us by.  This section of the walk was very busy with walkers, tourists and off-road cyclists.  It was also popular with midges and I realised too late that I had forgotten to apply any insect repellent before setting off that morning.  I certainly regretted this omission later in the week! 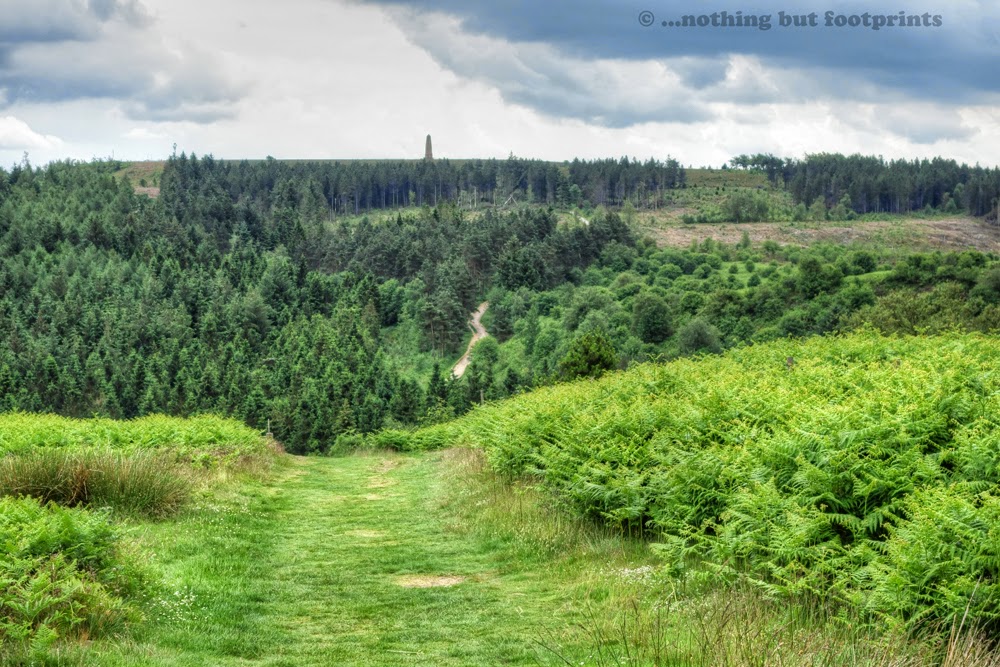 Looking back towards the monument
After about a mile or so the path turned off giving us the option to climb Roseberry Topping.  At just 1,049 feet its summit falls a thousand feet short of being classified as a mountain and yet, bizarrely, in a recent poll by "Trail" magazine, this iconic hill was ranked by readers as the 16th best mountain in the UK.  I was very keen to walk up to the top again because in February 2013 this had been the highest peak I had attempted for some considerable time and I had found it both daunting and exhilarating.  Now, after almost 18 months of walking and climbing, I was interested to see if I would notice any difference. 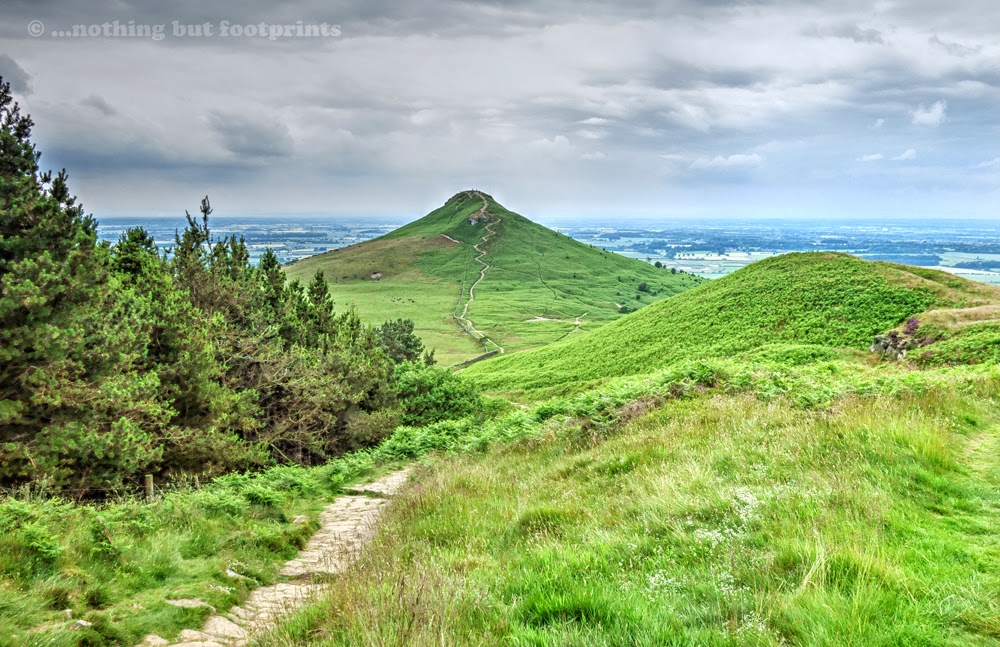 Approaching Roseberry Topping
As I began to climb up the stepped pathway to the summit my attention was drawn to a fat, hairy caterpillar wiggling its way along a branch.  My first thoughts were that this was a Red Admiral butterfly caterpillar but I've since realised that this is incorrect and, to date, I haven't been able to positively identify the species. 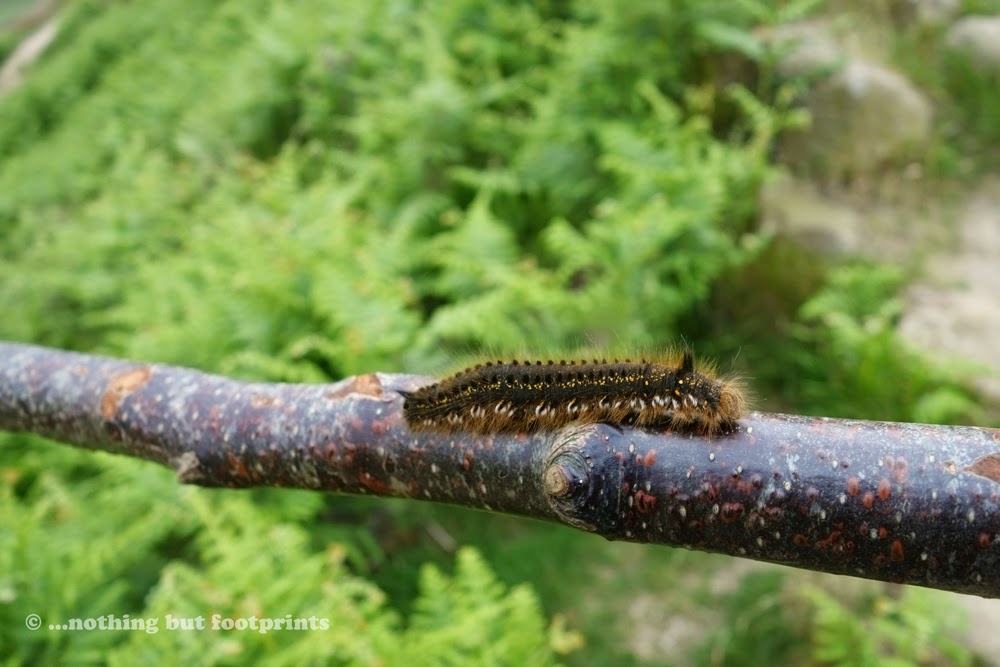 Unknown species of caterpillar
Happily my climb to the top of Roseberry Topping was completed with ease.  It hardly seemed like a climb at all and I only stopped once on the way up, to photograph the caterpillar.  A rest stop wasn't necessary and when I got to the top I was hardly out of breath.   It was good to have had this chance to monitor my progress and I felt extremely pleased with myself.  Finding somewhere to sit down at the top to have a drink and enjoy the view proved rather more of a challenge.  It was so crowded up there!  But eventually I found a perch with a view over the village of Great Ayton and across to the Cleveland Hills. 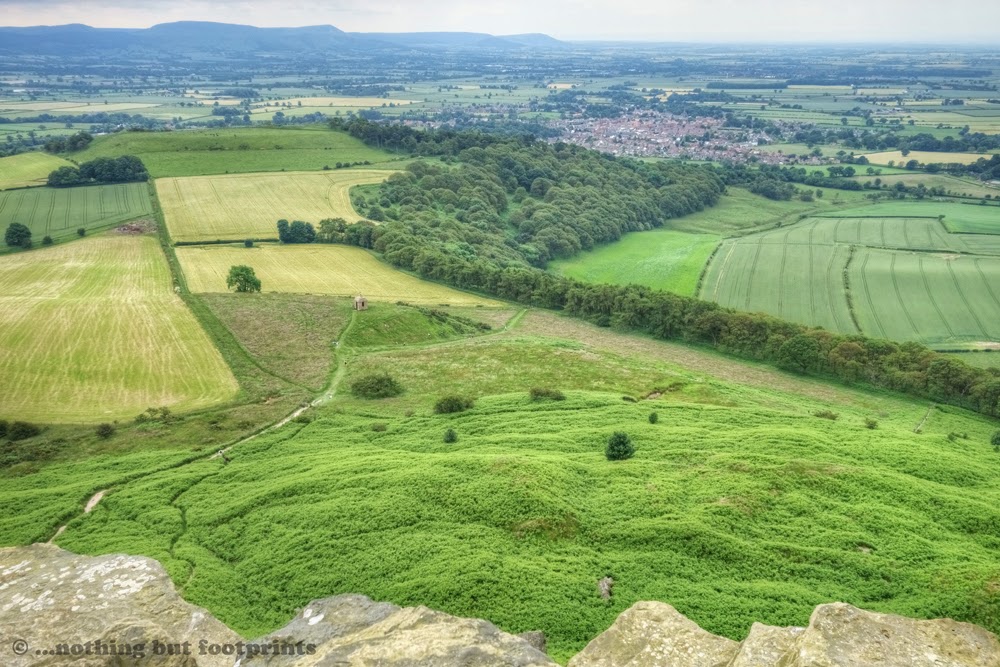 View from the top of the Topping
From the top of Roseberry Topping our route back to Guisborough could not have been more obvious.  A very clear path led into woodlands over the top of which the town was clearly visible. 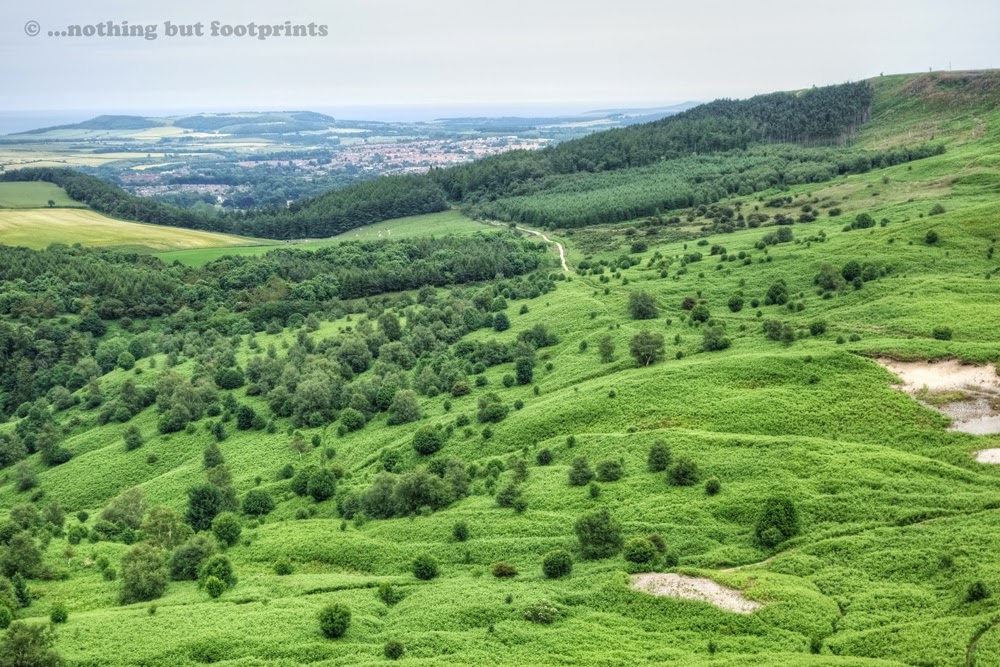 The way ahead is clear
Before entering the woods which would lead us back to Hutton Village and Guisborough via the Greenway, I glanced back at Roseberry Topping. From this angle its shape was not so distinctive.  It just looked like any average sized green hill and yet I could see why it enjoys so much popularity.  It may not actually have the stature of a mountain, but those who climb to its summit are rewarded not only with a sweeping 360 degrees view, but also a sense of achievement, whatever the level of fitness.   Little wonder then that this modest peak had its place in a list alongside the likes of Snowdon and Ben Nevis. 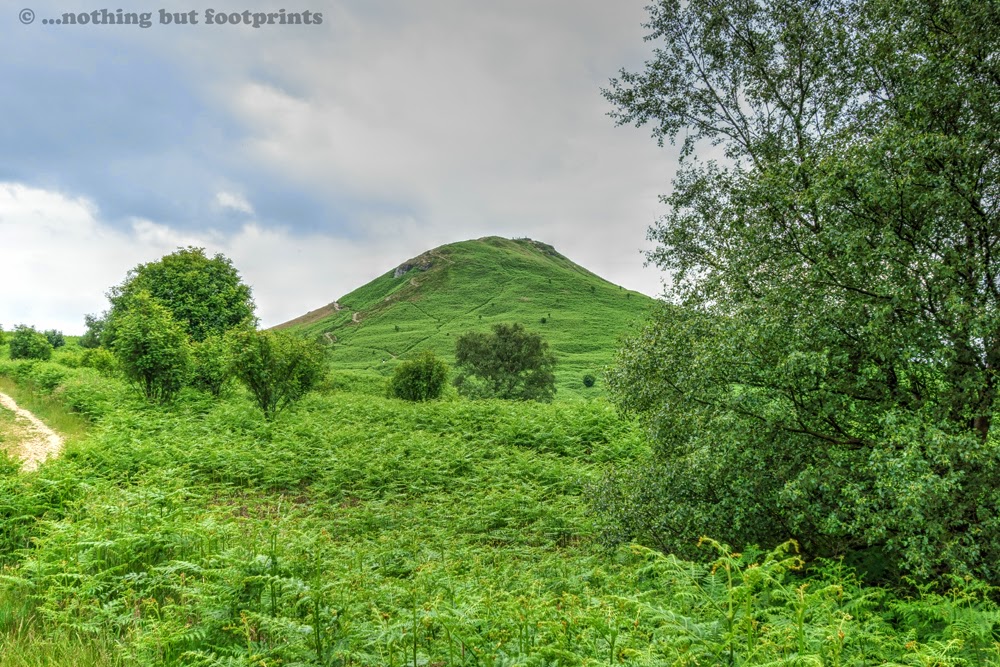 The less distinctive side of Roseberry Topping
Directions for this walk:
For a slightly shorter version of this walk you can park on the side of the road approaching Hutton Village.  However, this is a busy road and parking is limited.  On a Sunday parking is free and unlimited on Westgate in Guisborough and the town also has pay and display car parks.
From the centre of Guisborough head for Rectory Lane and turn onto Enfield Chase, just after the Lidl supermarket.  After a couple of hundred yards or so turn right onto the dismantled railway line known as the Guisborough Greenway and follow the track for a mile or so until it meets up with Hutton Village Road.  Follow this road until just before Hutton Village and then take the public footpath uphill through Hutton Lowcross Woods and out onto Great Ayton Moor.  Here a sandy track can be followed to a point known as Percy Cross from where a deeply rutted track to the right leads downhill to Lonsdale Farm.
After the farm follow the quiet country lane steeply uphill until a sign for the Cleveland Way points to the right.  Follow this footpath which will take you all the way to the Captain Cook Monument on Easby Moor.
From the monument take the Cleveland Way to Roseberry Topping (climbing to the top is recommended but optional) and then leaving the Cleveland Way a path can be taken through Hutton Lowcross Woods, either to Hutton Village Road or back along the Greenway into Guisborough, depending where you have parked.
Total distance - 12.25 miles. 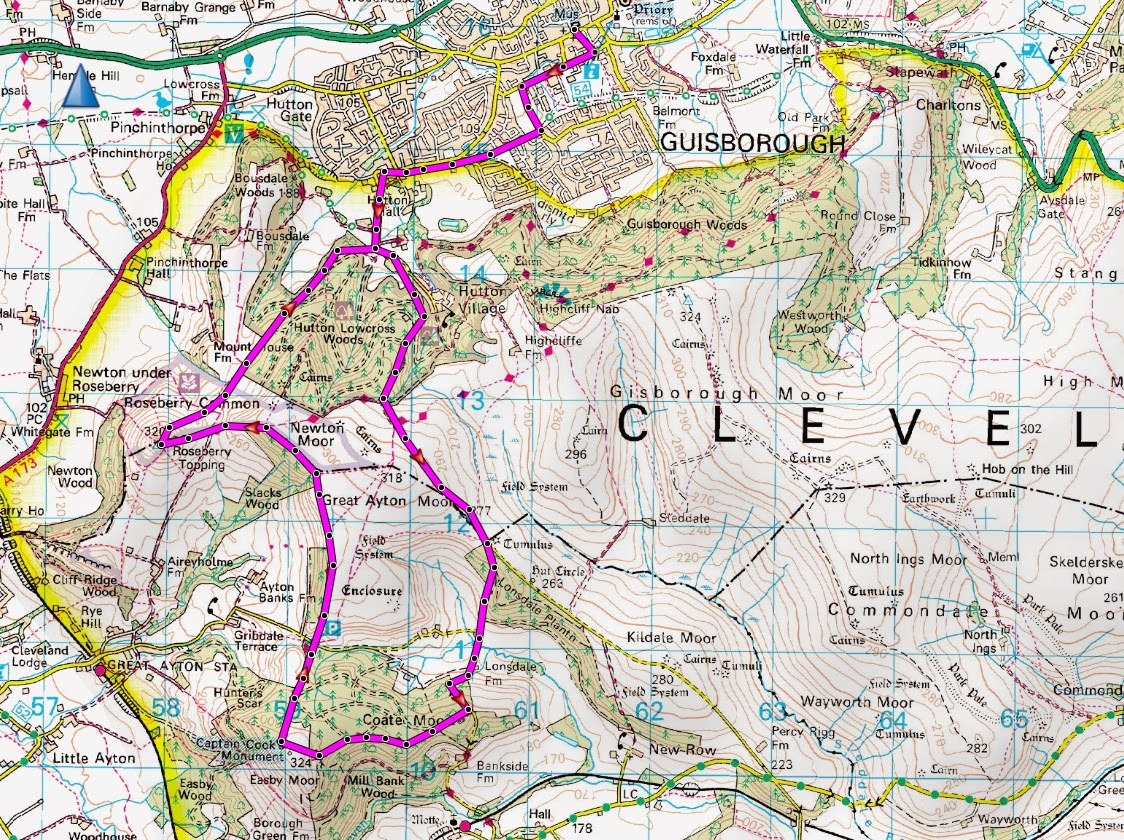 Coming soon...It's time to climb some proper mountains!  We head off to the Lake District for a fantastic week of walking, beginning with beautiful Blencathra.
at 09:17