- October 16, 2014
As much as I'd like to be able to, I can't go walking in the Lake District every week.  It's just a little too far to travel there and back in a day.  And the Yorkshire Dales, whilst closer to home, also entails just a little too much travel time to make regular walking there feasible, particularly as the hours of daylight decrease.  Although we seem to favour the North York Moors for most of our weekend walks, the Yorkshire Wolds occasionally provide us with a contrasting alternative.

In mid September, on a calm, mild and overcast day, we decided to revisit a section of the Yorkshire Wolds Way, with a circular walk beginning from the village of Settrington, near Malton.  It had been raining heavily when we had walked this section of the Wolds Way, back in May, and the low cloud had robbed us of any kind of a view from the higher ground.  So, although the light was far from crystal clear, I nevertheless hoped to at least catch a glimpse of what we had missed the last time we had passed this way.

Starting the walk from the pretty village of Settrington appealed to me, because I have strong family connections with the place.  It was here, almost 80 years ago, that my father had been born, in a little York stone cottage by the stream.  His grandfather (my great-grandfather) was the village blacksmith and as a child I had visited his cottage and forge, fascinated by the anvil and the tools of his trade, and the antiquated interior of his home.  When my father died, 15 years ago, my family briefly considered scattering his ashes in the stream which passes the door of the former forge, but instead we opted for a burial in our local churchyard, with an anvil carved on his headstone as a symbolic reminder of his birth.   I have rarely revisited Settrington since my childhood.  My great-grandfather died when I was a child, and his house and forge were sold and converted into a family home.  As we walked towards the former blacksmith's shop, I paused for a while, looking over the stream towards the cottage, enjoying  clear memories of playing in the stream and my father driving through the ford. 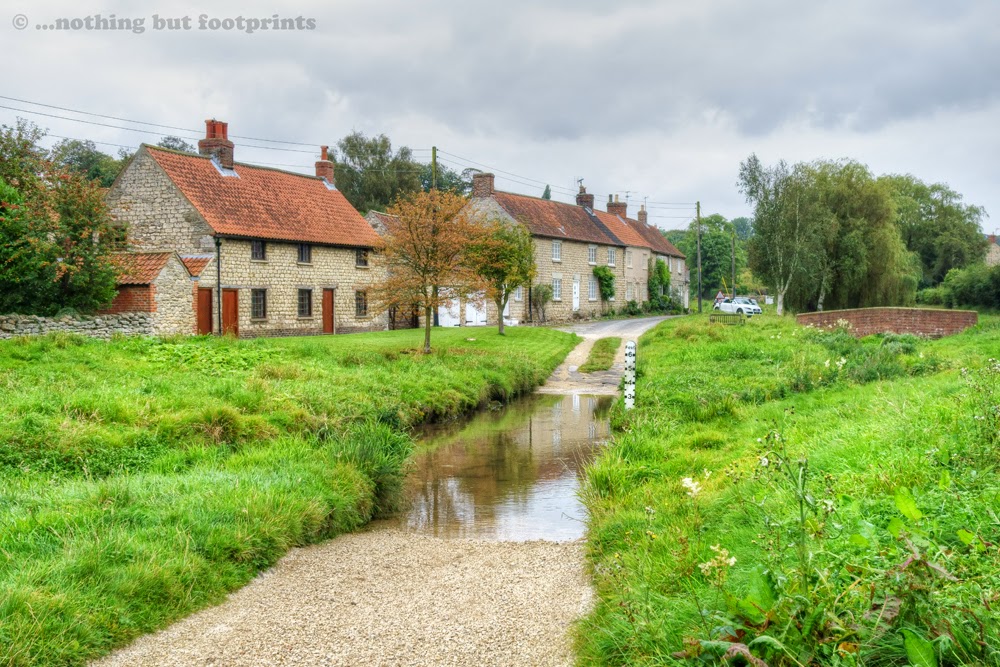 Looking across the ford to the Old Blacksmith's Shop, Settrington

Our route from the village took us past the entrance to Settrington House where I stopped for a moment to look at the gates.  I recalled that my great-grandfather had made a set of gates for the house, but the ones in place today were obviously much newer replacements, and so we pressed on, up the hill, before turning to join a track towards a farm called Low Bellmanear.   After the farm we crossed a couple of fields, heading towards the higher ground and to join the course of the Yorkshire Wolds Way. 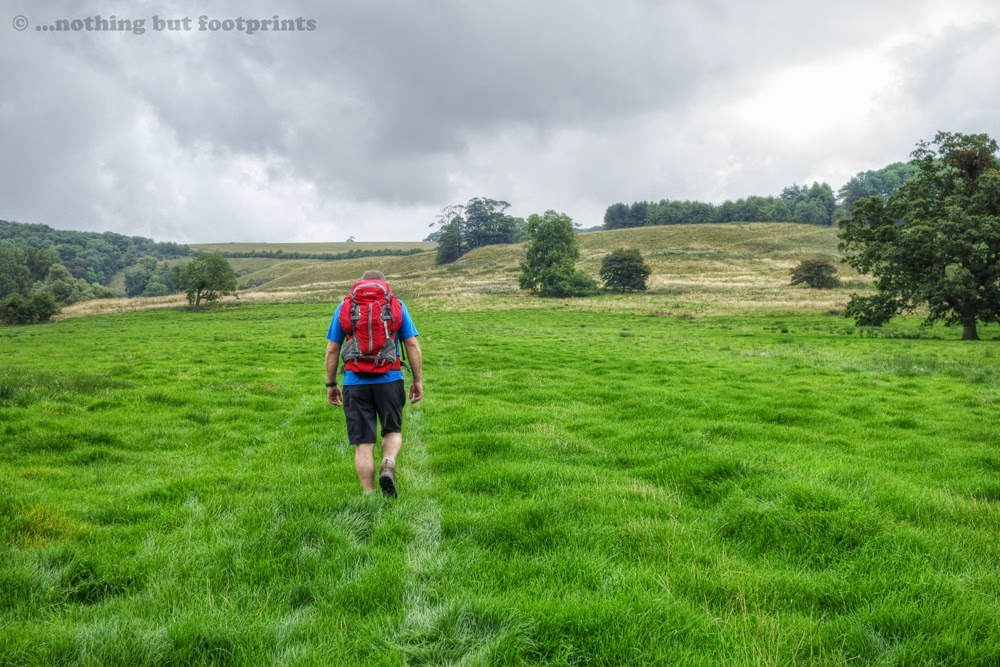 Crossing the fields at Low Bellmanear

As the path climbed uphill, a hazy view of the Vale of Pickering became visible.  It was quite a dull day and the landscape was poorly lit, but even so the view was very pastoral and pleasant. 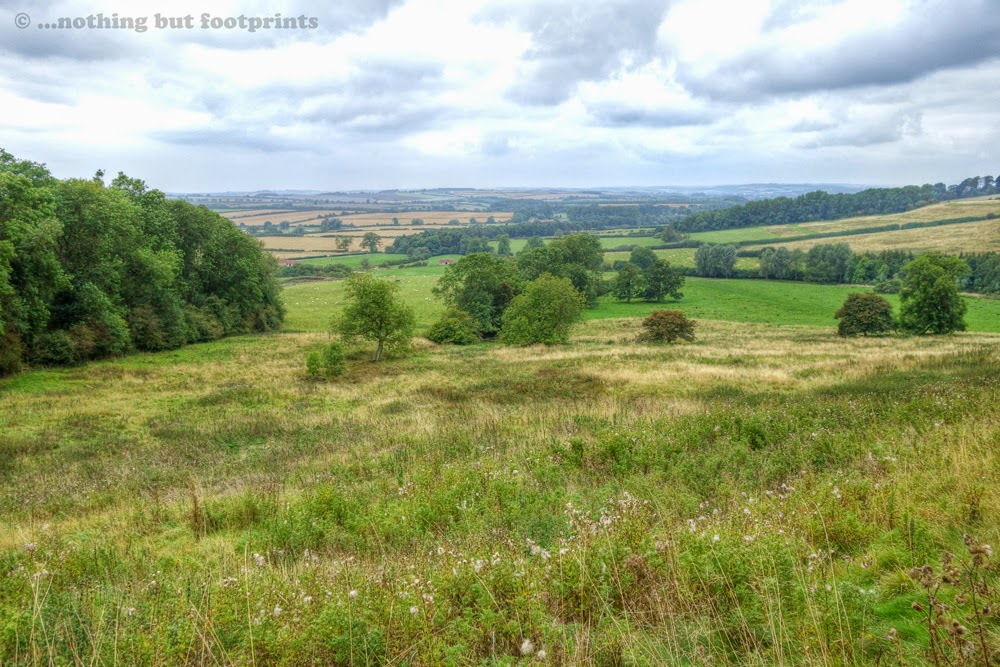 View over the Vale of Pickering

One of the fields we passed through was thick with dandelions in flower and in seed, providing a splash of sunny colour on an otherwise fairly drab day. 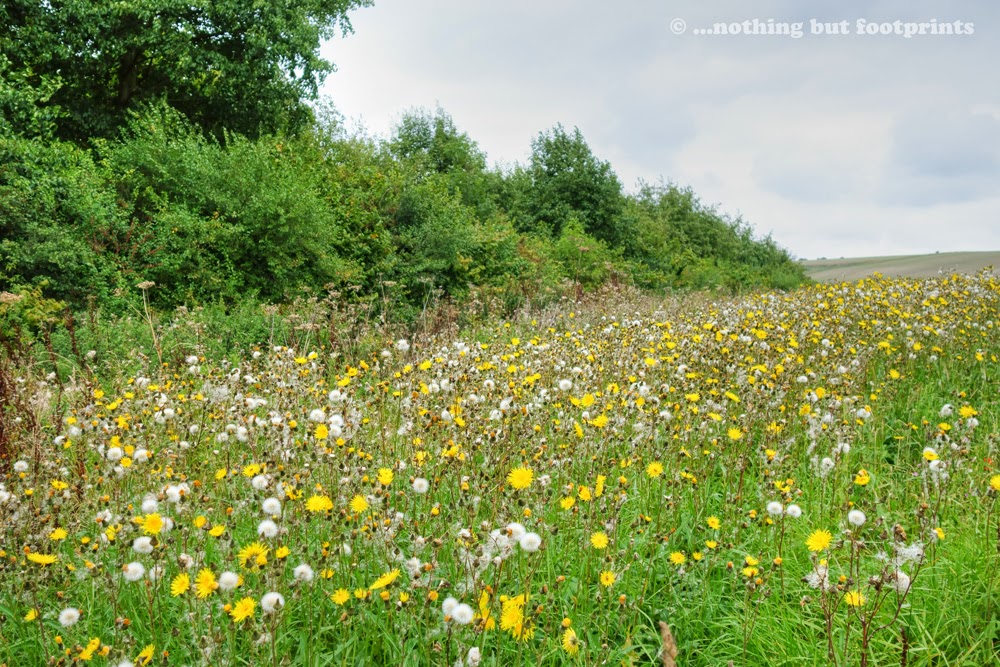 A splash of sunshine on a dull day

At the top of the hill we met up with the Yorkshire Wolds Way.  I recalled this section of the walk very clearly indeed.  There had been no view whatsoever as we had passed this way in May, on the fourth day of our long distance walk.  The cloud had been so low, even the tree in the middle distance had been obscured from view. 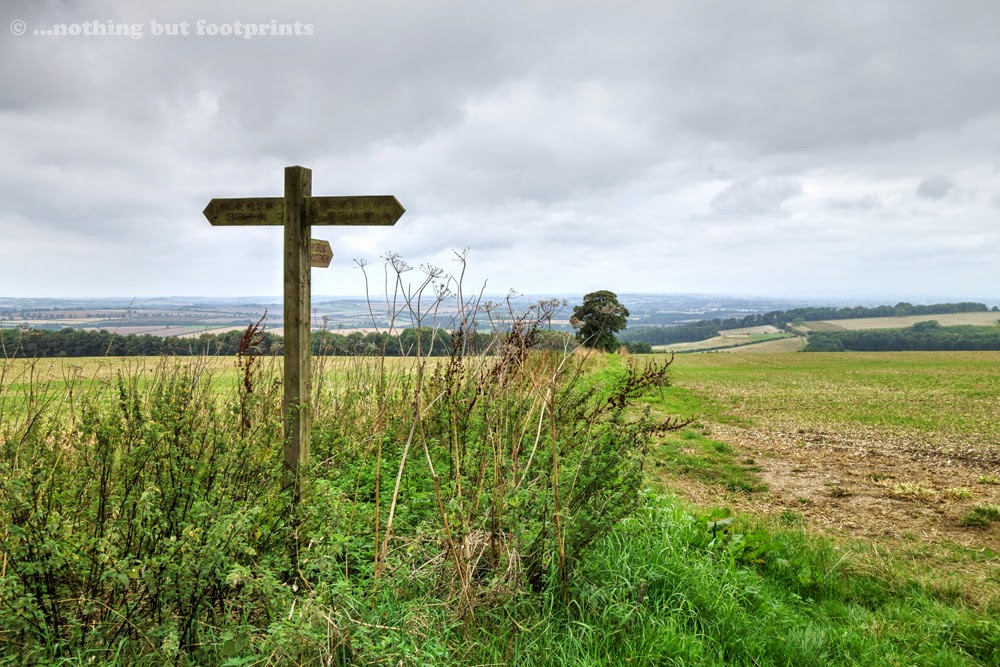 From this point we followed the Wolds Way for a couple of miles, passing through the farm of High Bellmanear where a large heap of recently harvested grain lay stashed against the side of a barn. 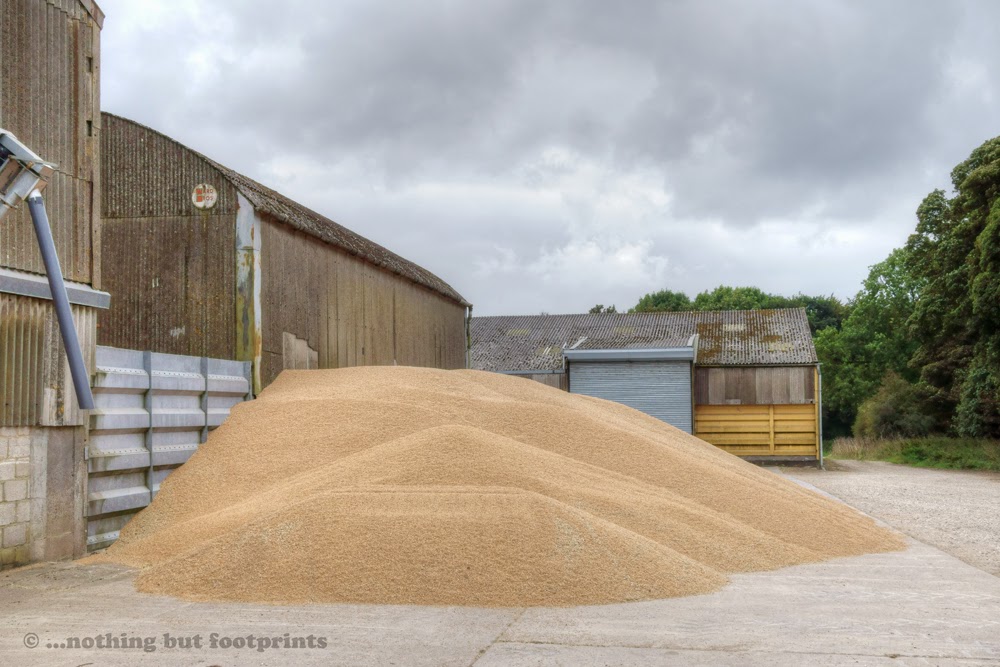 At Settrington Beacon we crossed a road and entered woodland which I remembered had provided us with some welcome shelter on the day we had passed this way along the Wolds Way. 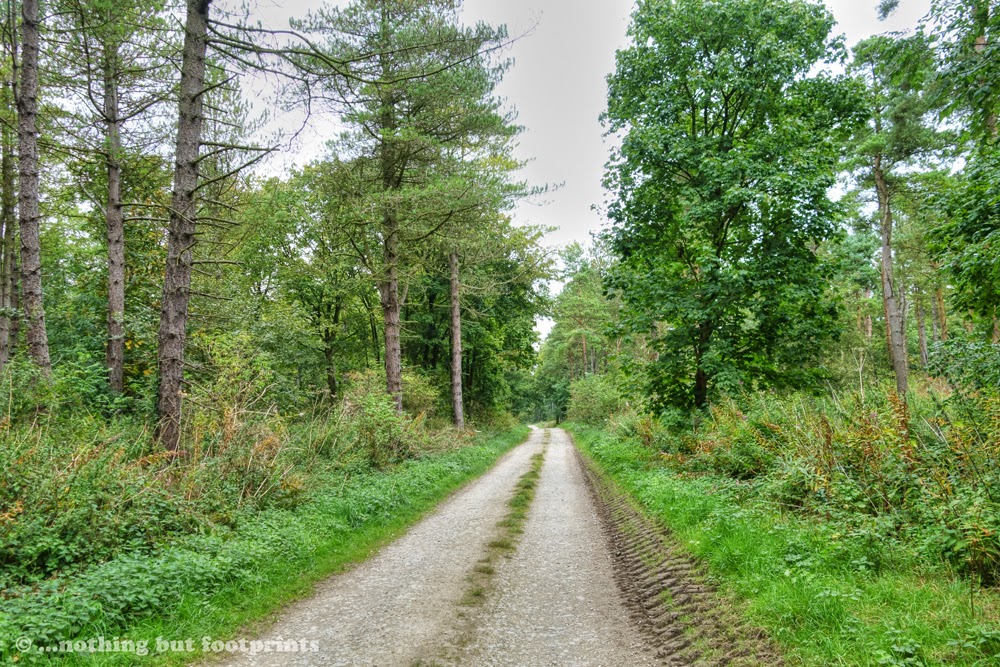 The route through the woods

The woodland ended at a gate with a view over the Vale of Pickering towards the North York Moors beyond.  We had a slightly better vista to look at this time, although the line of the distant moorland was hazy. 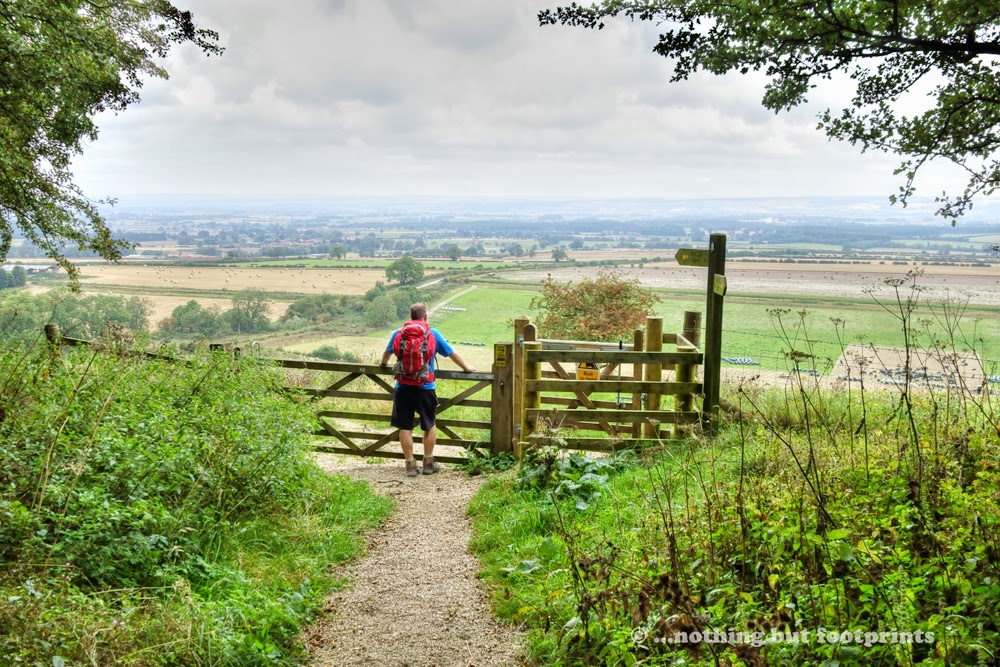 Even so, it was a nice spot to pause for a while and enjoy a drink before continuing along the route of the Wolds Way in the direction of Wintringham. 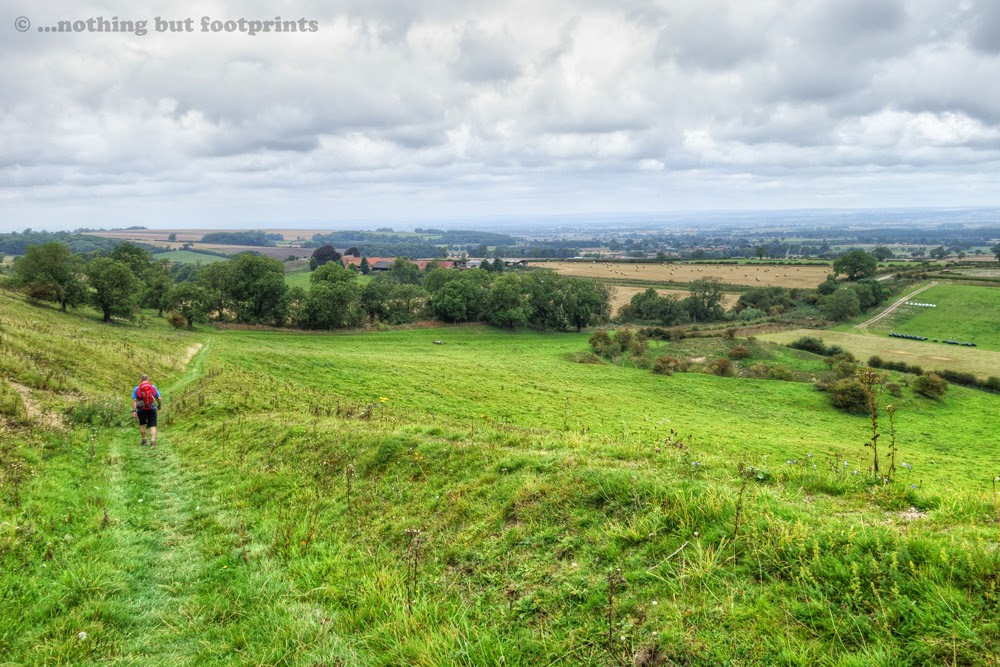 Our intended circular route should have turned back in the direction of Settrington before we reached the village of Wintringham, but I was keen to pay a return visit to the Wolds Way Lavender Farm, and so we headed into the village, crossing a field which had recently been harvested.  In May this path had been high with corn, now the route was much clearer. 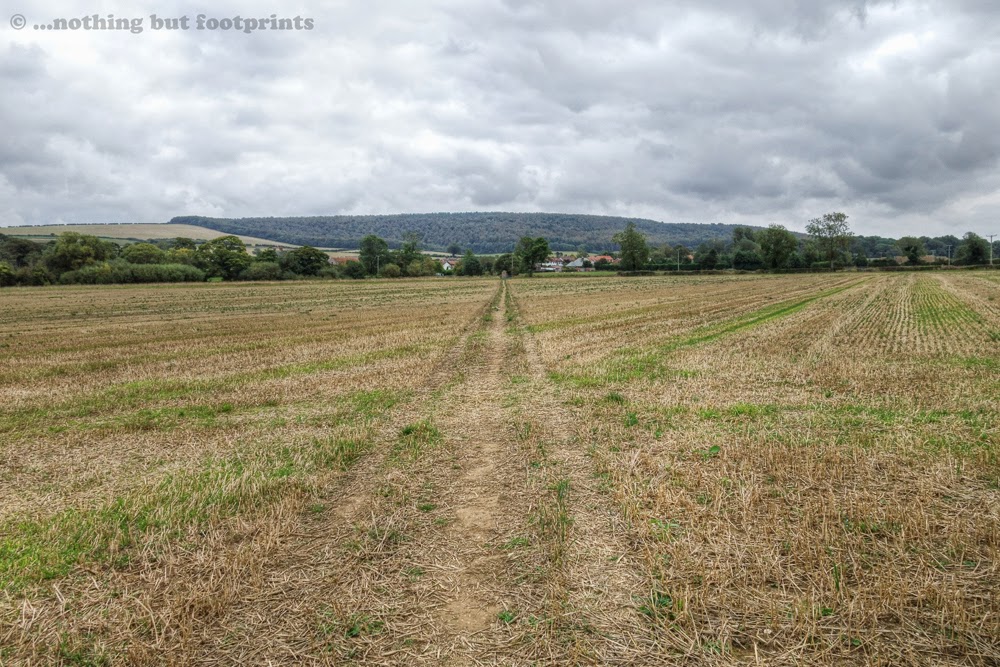 Crossing the fields to Wintringham

We entered the village of Wintringham by the village's Millennium Pond, a flash of iridescent blue catching Tom's eye as we approached.  It was a kingfisher, which had darted into the reeds as we approached and we sat for a while, hoping he would return to his recent perch on a stake in the centre of the pond.  As a group of walkers approached in one direction, and a couple of horse riders emerged from the other, we realised that the lovely little bird wasn't going to return any time soon, and so we continued along our way, through the village, and along to the lavender farm. 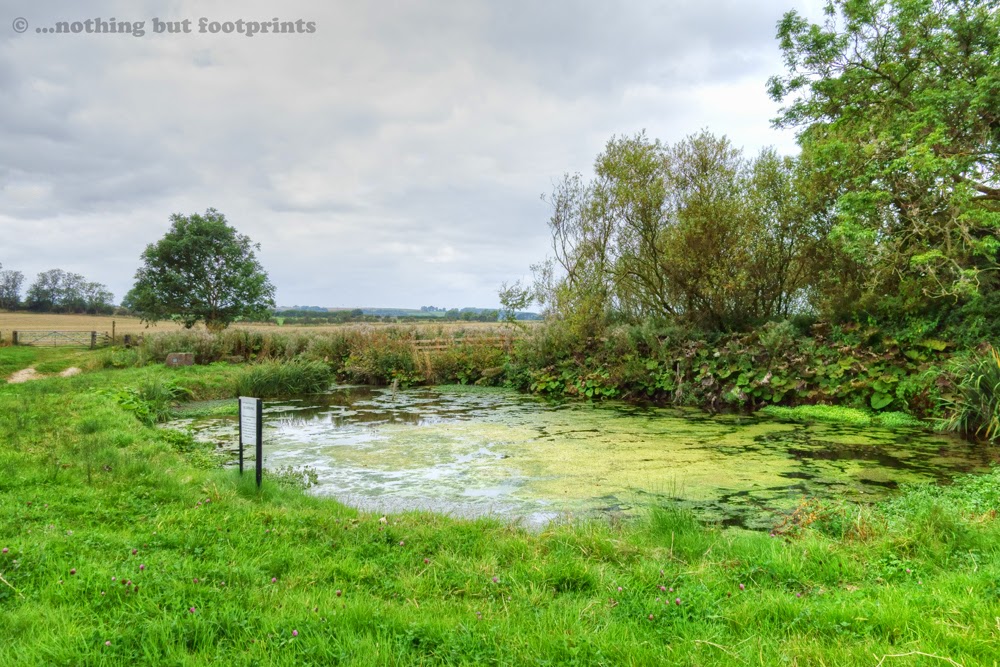 In May we had spent a happy hour at Wolds Way Lavender Farm, sheltering from the rain whilst sampling the cakes and shopping for lavender products.  On this occasion my diet prevented me from enjoying any of the delicious sweet treats on offer and I restricted myself to a black coffee.  I was happy though to be able to purchase some more of their wonderful soothing foot balm and also a pot of lavender cooling gel, which is excellent for relieving nettle rash and insect bites. 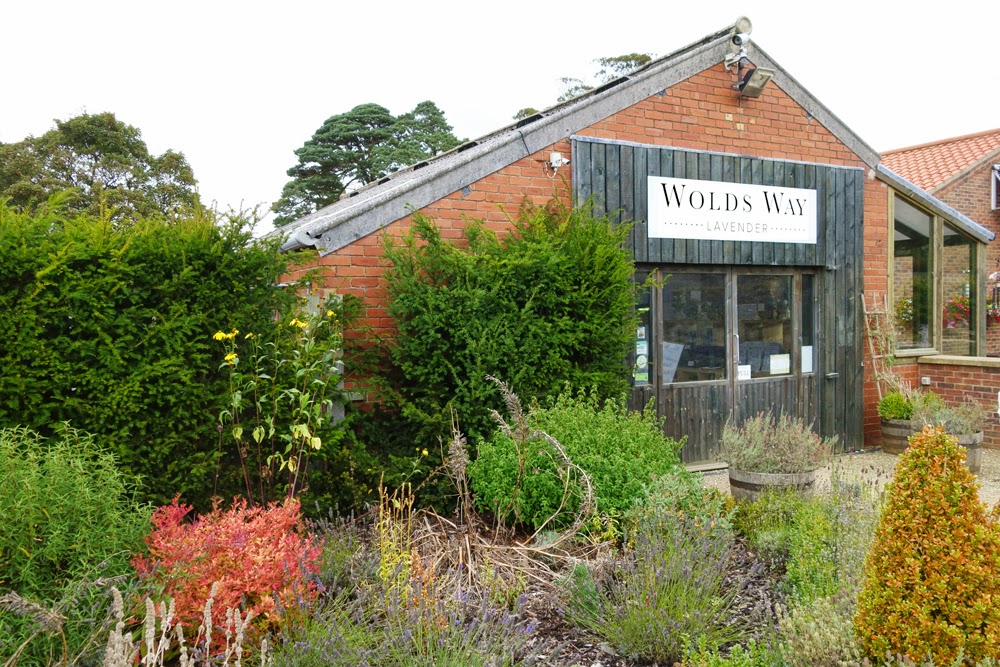 From the lavender farm we retraced our steps to the Millennium pond and back over the field path to cross the Wolds Way again and head off in the direction of the village of Thorpe Bassett.  As I walked I munched on an apple, congratulating myself on my willpower.  To date I had shed ten pounds and I wasn't about to spoil that for the sake of a lavender scone...as tasty as they may be!

As we crossed the Wolds Way we met up with a couple who were walking the long distance trail and we stopped for a while to chat with them, providing directions for the next part of their route and generally agreeing on what an excellent walk it is.  This was their fifth day on the trail and I have to confess I felt a little envious at the wonderful weather they had enjoyed.  Even on this day, as overcast as it may have been, at least it wasn't raining and the temperature was ideal.

The village of Thorpe Bassett was just a mile or so from the Wolds Way, along a distinct and broad farm track.  The map showed a ford and footbridge close to the village which turned out to be something of an obstacle.  The ford was a little too deep and muddy to wade across and the footbridge could only be accessed by walking over a very muddy verge, ducking under a hawthorn tree and then jumping onto the bridge.  Thankfully some long grass a little further along the path enabled us to clean the thickest of the mud from our boots. 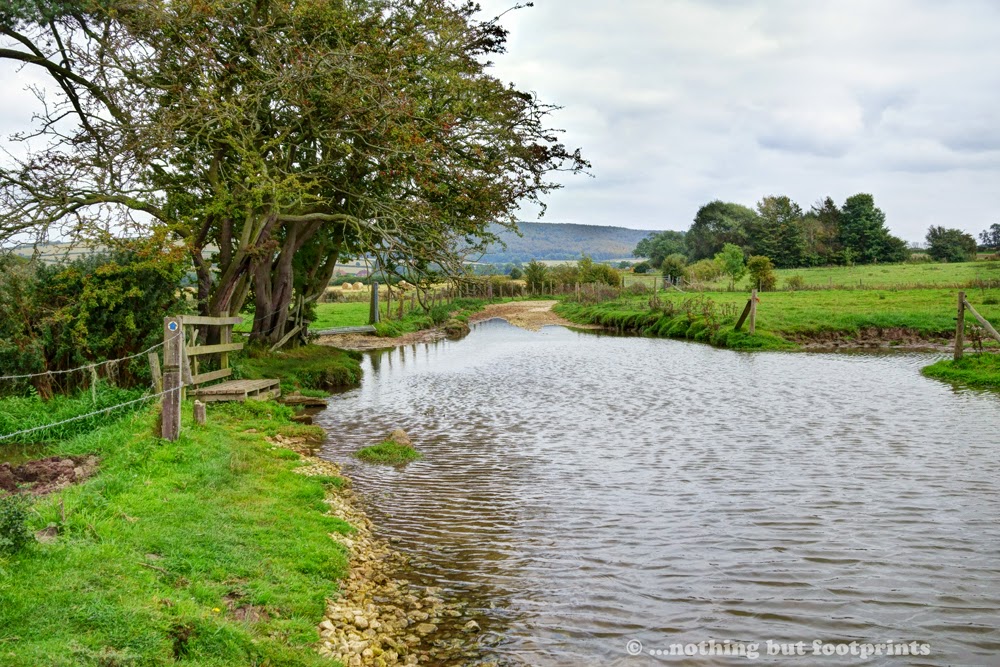 From Thorpe Bassett the walk was mostly a tramp along field headlands and hedgerows, climbing all the while until once again we had a view across the Vale of Pickering towards the North York Moors. 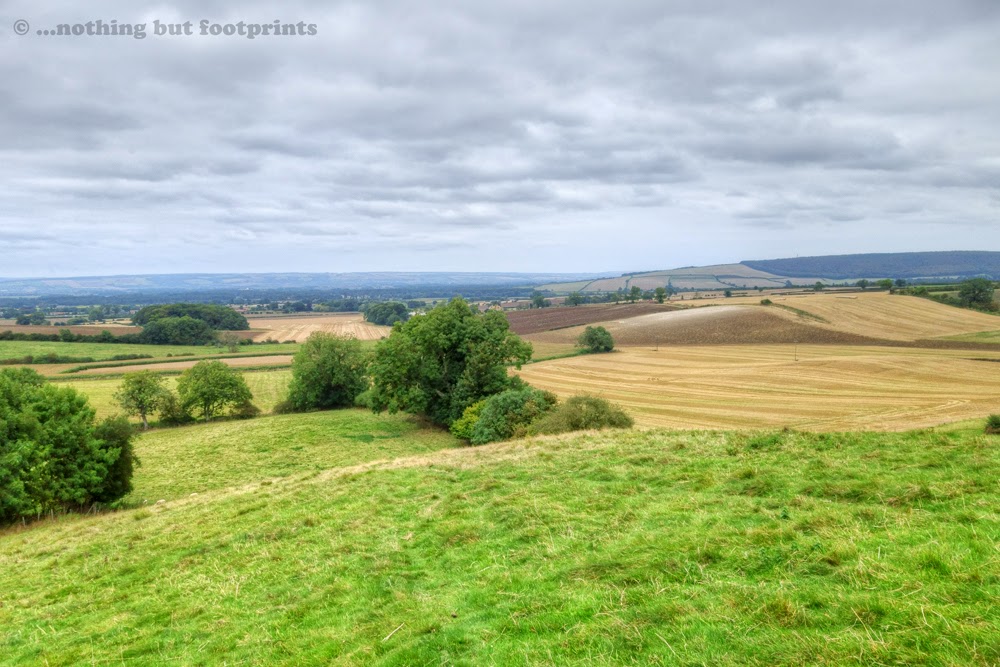 Looking over the Vale of Pickering

From the higher ground we followed a quiet country lane downhill and back into Settrington, having walked a total distance of just over 12 miles.

Perhaps it was the overcast day, or maybe the fact that just one week before we had been clambering up the Lakeland fells, but I must admit that this walk seemed a little flat, in more ways than one.  Maybe one day we will follow this route again, on a brighter day, and finally get to see what I'm sure, on a sunny day, is a very nice view indeed. 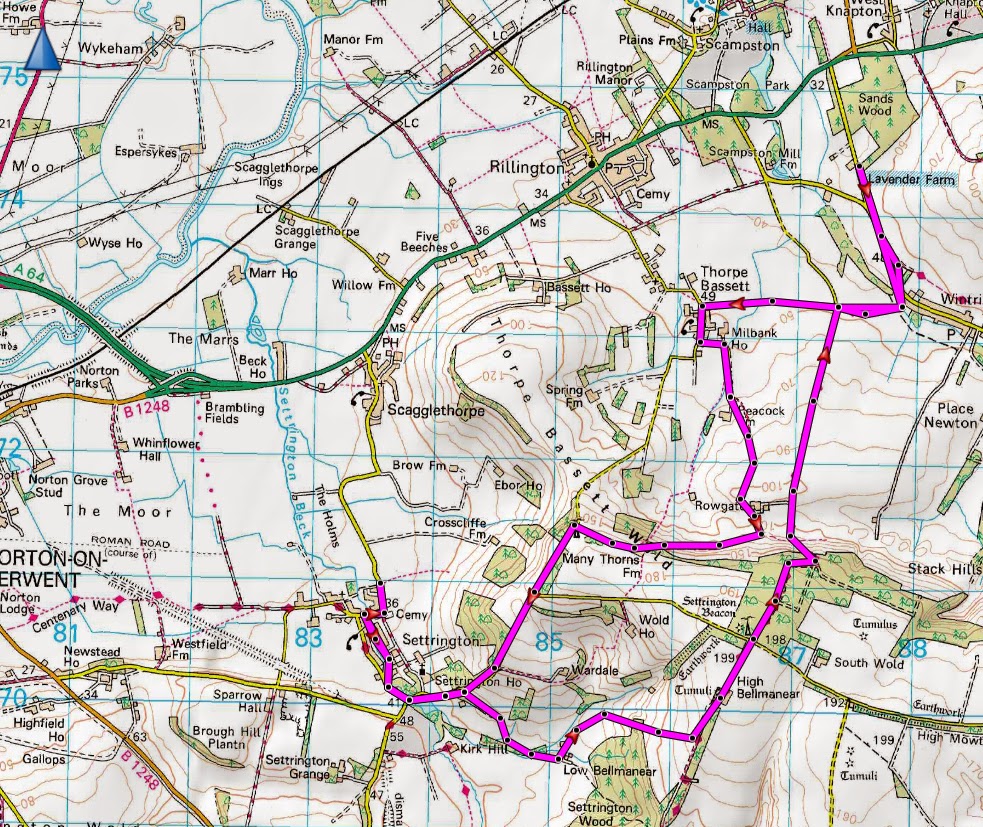