On a bright and frosty morning in early February we decided to revisit the Yorkshire Wolds.  There had been a fall of snow earlier in the week which had mostly melted away from the lower ground but was still laying quite thickly up on the North York Moors.  Anticipating a lighter covering on the Wolds, we wrapped up warmly and drove out to the village of Thixendale.

The roads approaching the village were unsalted and very icy in places, particularly in the valley bottoms where the shadows of the hillsides had kept the sunlight at bay.  I had plotted a route out of the village following the Yorkshire Wolds Way to begin with before turning to follow the route of the Centenary Way in a large arc, eventually to rejoin the Yorkshire Wolds Way again for the return to Thixendale.  I believed our route was to be approximately 12 miles in length, which allowed us plenty of time to get back to the car before darkness fell, at around 6 p.m.

We had only taken a few short steps away from our car when a welcoming sign offering refreshments lured us in to the tiny village hall in the centre of the village.  Here we enjoyed a coffee and slice of homemade cake before leaving the road to join the Yorkshire Wolds Way as it climbs steeply up Beamer Hill.   After just a short climb I turned to take a photo of a very wintry looking Thixendale, the road shining like an icy ribbon running through the centre of the village. 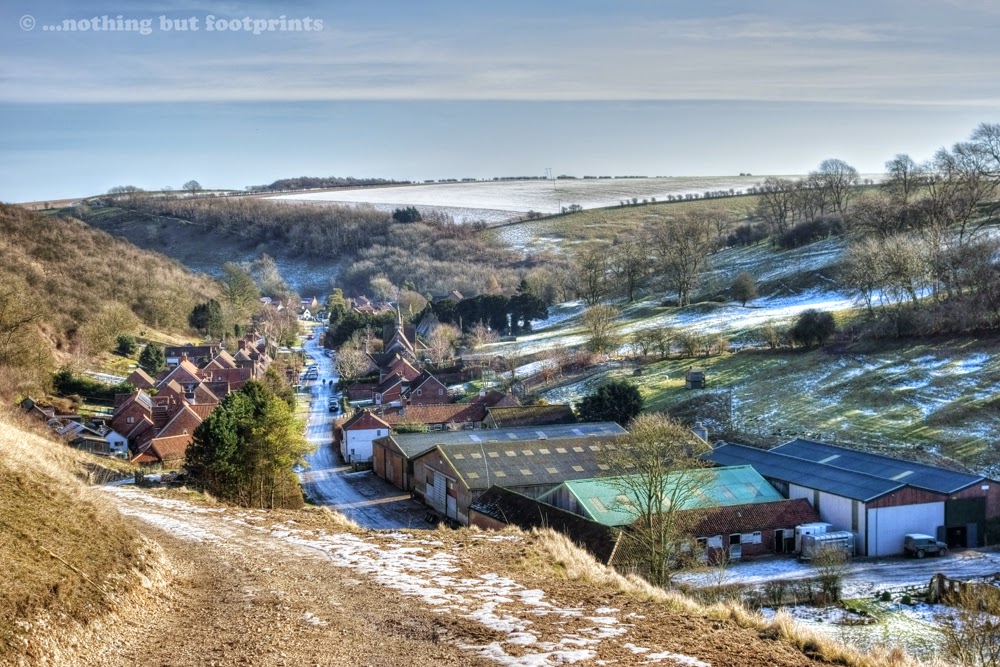 At the top of the hill I paused to look down over the convergence of undulating valleys, remembering the last time we had stopped here, when we'd been walking the Wolds Way.  This was back in May when the now naked hawthorns had been abundant with blossom and, as far as the eye could see, the fields were a rich, lush green.  The winter version of this view was quite a contrast, but just as beautiful in its own way. 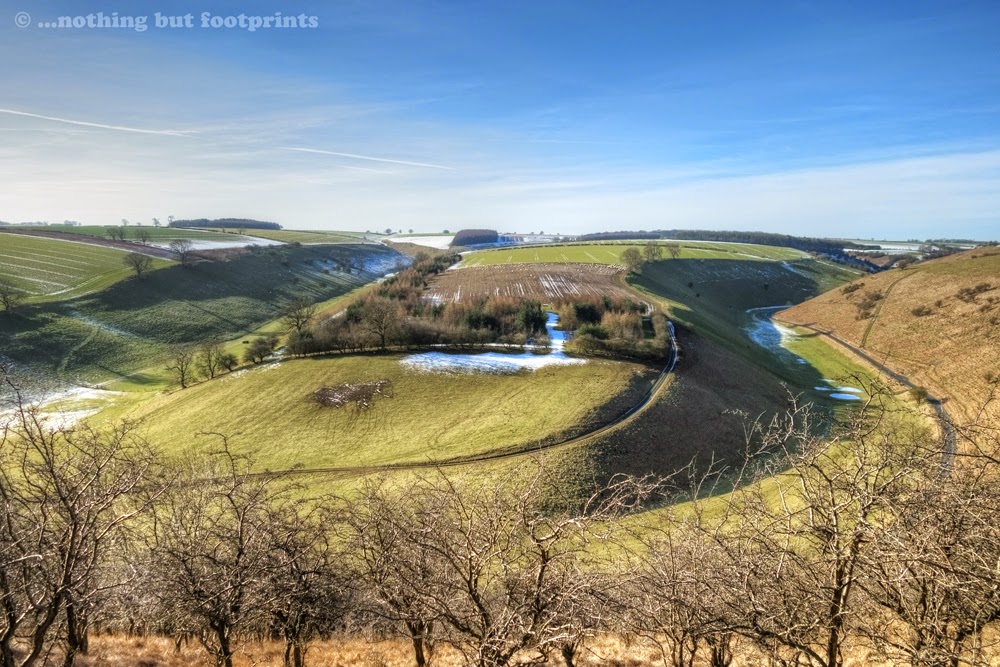 So far the snow cover had been patchy, but as we headed along the higher ground it became a little thicker, especially where tree belts had sheltered the ground from the sun's rays. 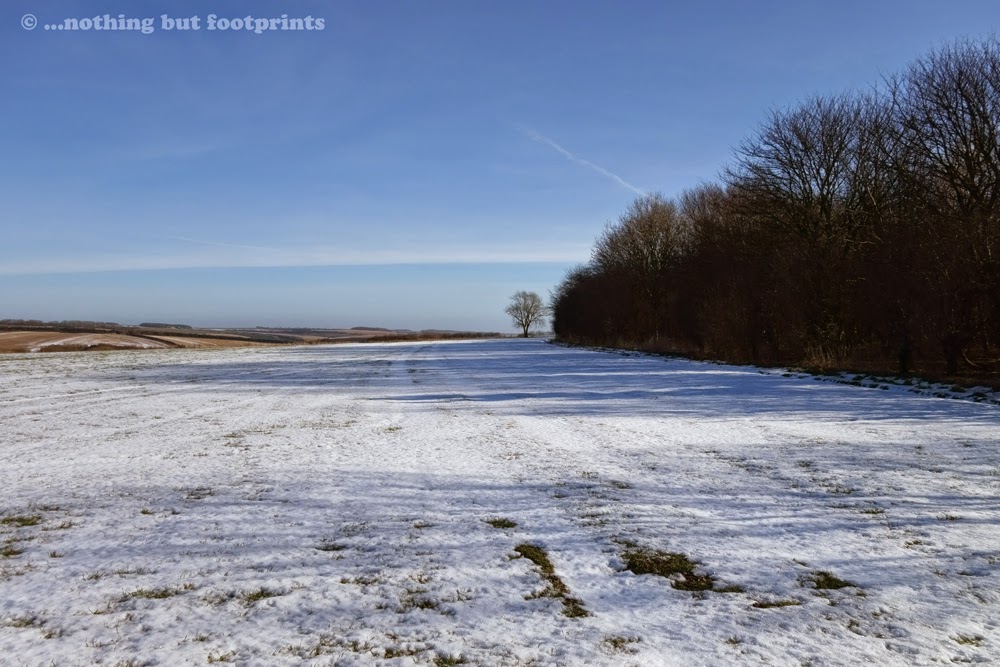 The day was now surprisingly warm, in spite of the frozen ground, and the sun shone down on us as we continued to follow the clearly defined trail between fields. 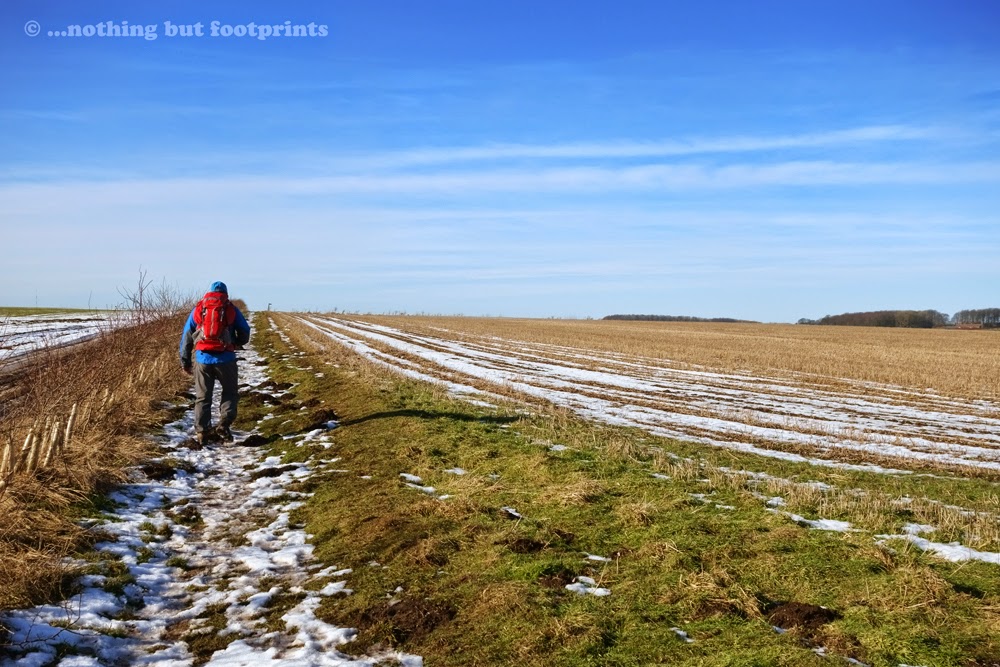 On the Yorkshire Wolds Way

The Yorkshire Wolds were formed during the Cretaceous period, which lasted for over 80 million years and ended with the mass extinction event which eradicated the dinosaurs.  Ordinarily, as you walk among the rolling hills, it's hard to imagine that they are formed from the bones of zillions of marine creatures.  As we reached the top of a hill I caught a rare glimpse of the underlying chalk by the side of the track, where the grass and subsoil had eroded. 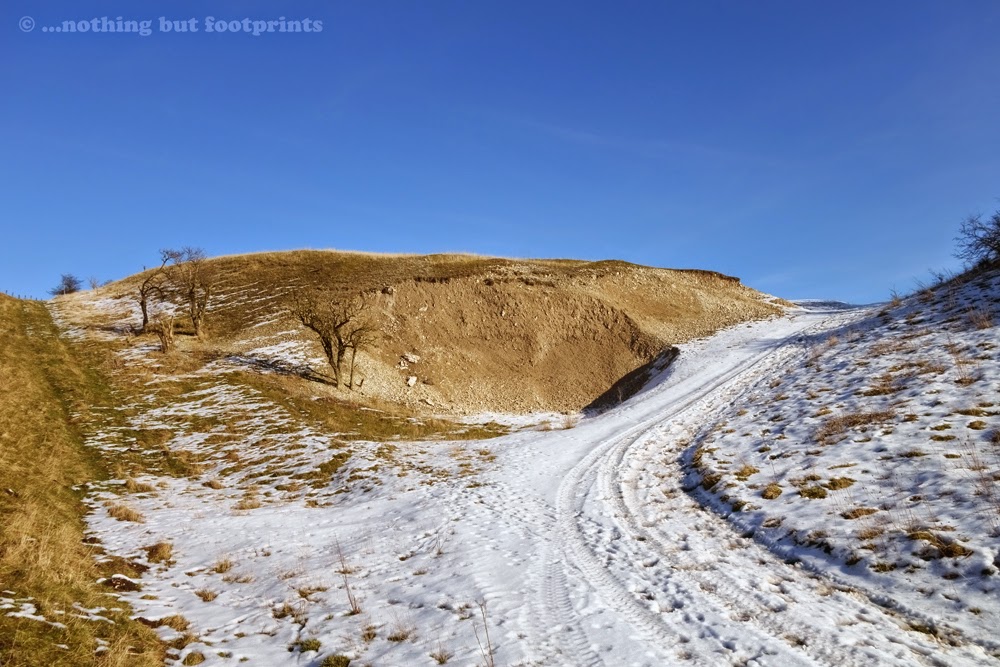 At the top of the hill we reached a parting of the ways, the Yorkshire Wolds Way turning right in the direction of Wharram Percy.  We, however, turned left, to follow the route of the Centenary Way, a long distance walk of 83 miles which was devised in 1989 to celebrate 100 years of North Yorkshire County Council.  Starting in York, the Centenary Way winds its way through the Howardian Hills to join up with the Yorkshire Wolds Way east of North Grimston and then onwards to the sea at Filey Brigg. 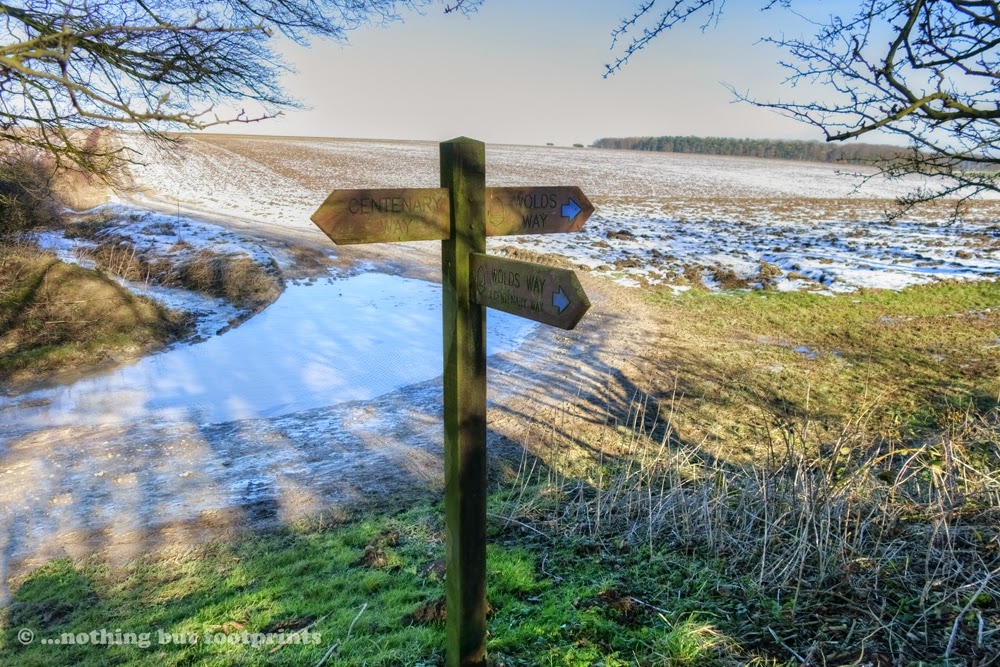 Parting of the Ways

At this point we were following a route we had never walked before, even though I am very familiar with the area.   Like the Yorkshire Wolds Way, the Centenary Way is well signposted, making navigation very straightforward.  We simply had to follow the fingerposts and enjoy the view.  On the higher ground the snow created lacy patterns in the furrows of recently ploughed fields, contrasting beautifully with the crisp blue sky. 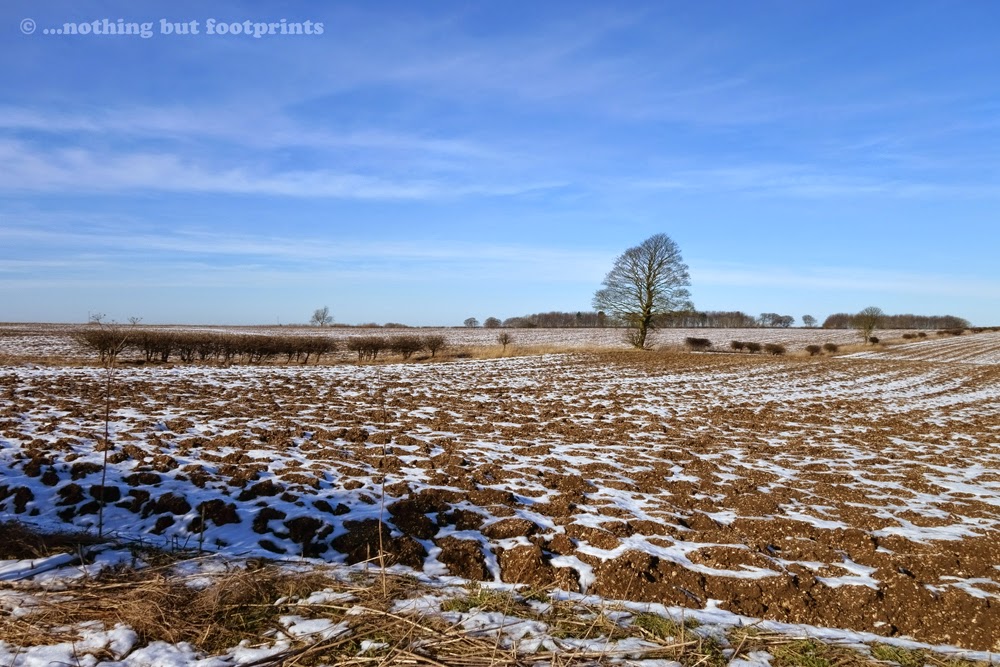 After a short walk in a westerly direction we turned northwards, walking through a farmyard beyond which we arrived at the top of Birdsall Brow.  Before heading downhill we paused to admire a wonderful view across the Vale of Pickering to the snowy higher ground of the distant North York Moors. 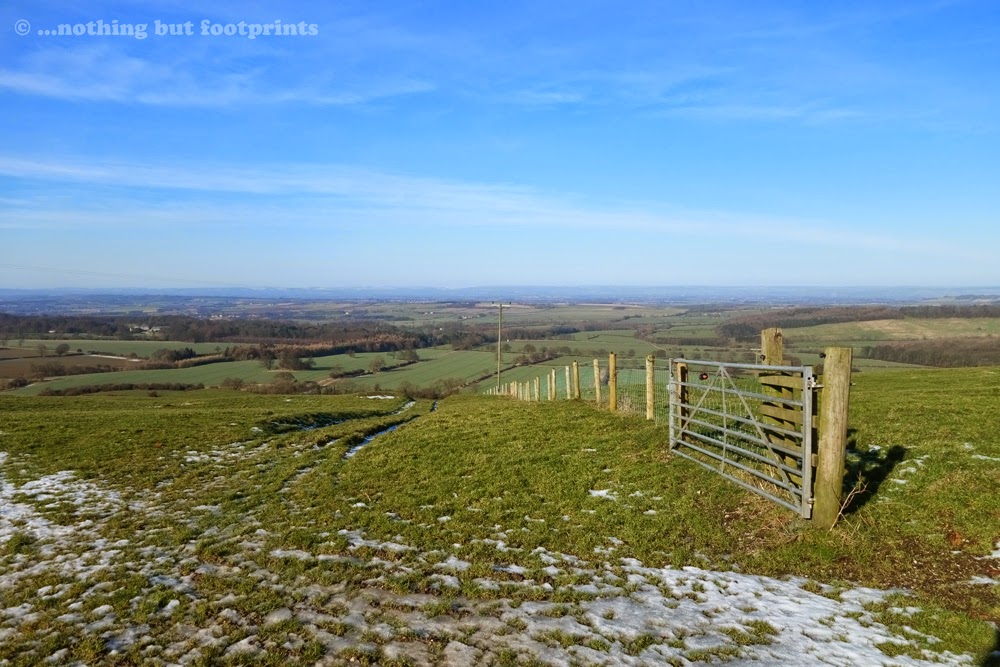 As we descended we caught a glimpse of our next destination, the village of Birdsall, which was just visible among the trees surrounding the grounds of Birdsall House, a large country house established in the 16th century. 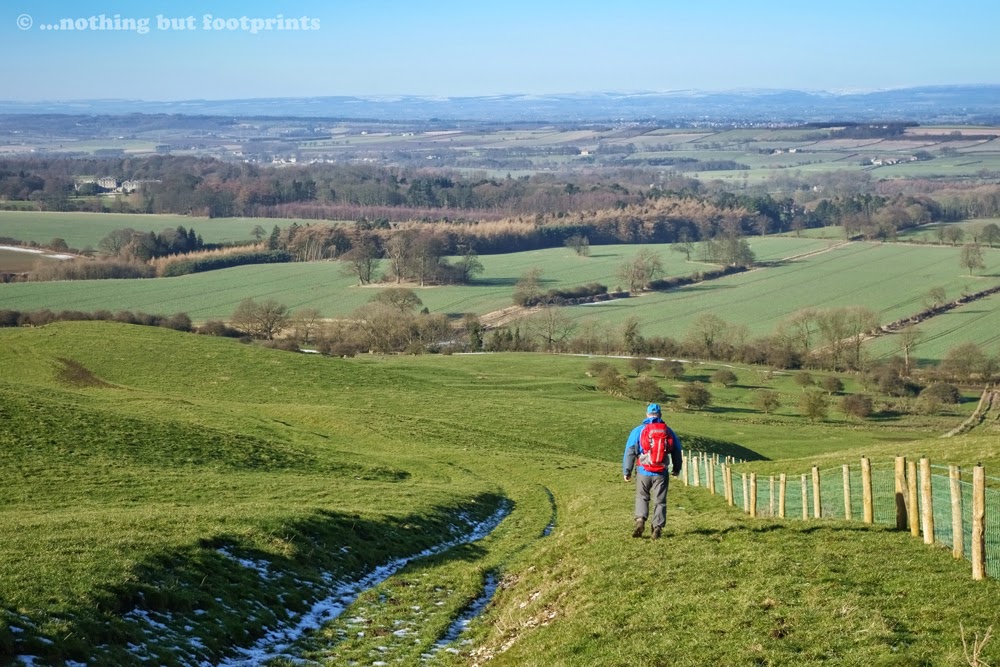 At the foot of Birdsall Brow I turned around to look back at the downhill path we had just followed from the farm at the top of the hill and my attention was drawn to a series of lumps and bumps in the landscape.  These certainly had the appearance of being manmade rather than geological features, although I have yet to determine their origin.  A short distance to the west of this area can be found the earthwork remains of a motte and bailey  castle at Mount Ferrant, and to the east lies the deserted medieval village of Wharram Percy.  This has led me to wondering if the bumps I could see on Birdsall Brow were also medieval earthworks of some kind. 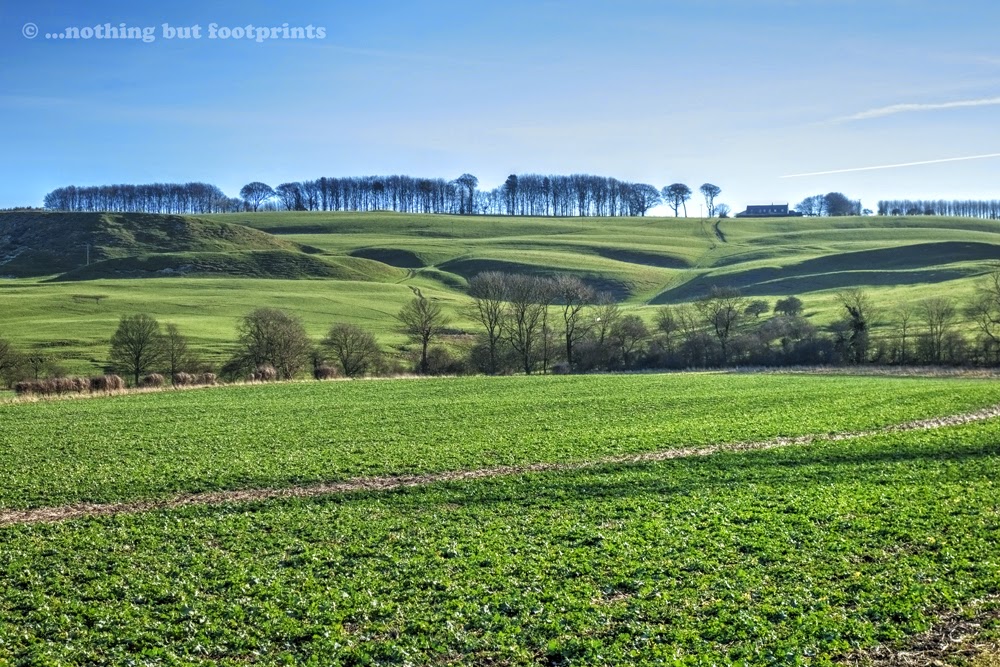 Continuing along the Centenary Way, we joined a quiet country road which we followed through the village of Birdsall and onwards past the picturesque church  of St Mary's which was built in the 19th century on a hill to the north of the village. 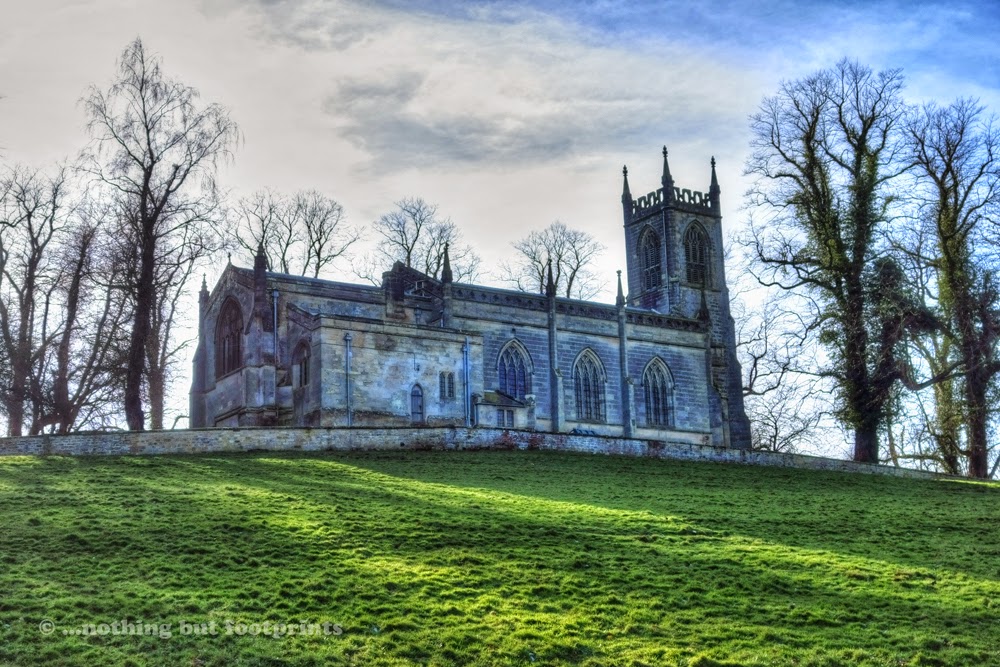 The road we were following curved around the foot of the hill,  before continuing northwards in the direction of the town of Malton.  We, however, left the road just north of the village, following a narrow lane for a short distance before turning to follow the Centenary Way crossing several fields which would take us to the village of North Grimston.  The path was indistinct and very boggy in places.   Before long our boots were heavy with accumulated mud. 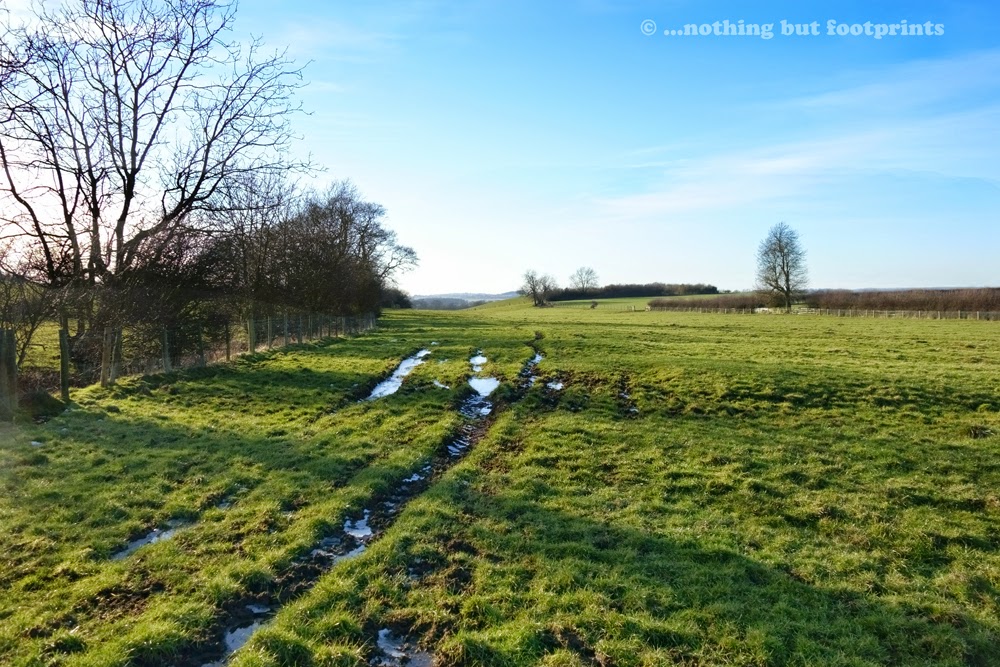 The ground became drier as we began to climb gently uphill in the direction of North Grimston, passing a small flock of sheep which didn't scatter as we passed but simply watched us with what looked like restrained curiosity. 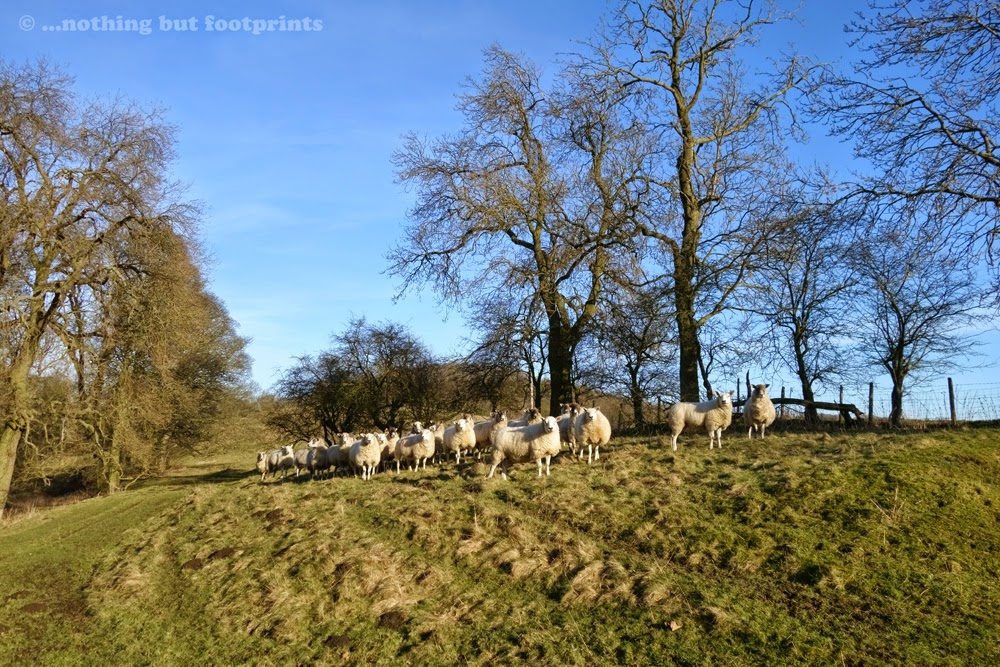 As we approached North Grimston the path took us under an old railway bridge, a remnant of the old Malton Dodger Line which ran between Driffield and Malton from 1853 until its closure in 1958. 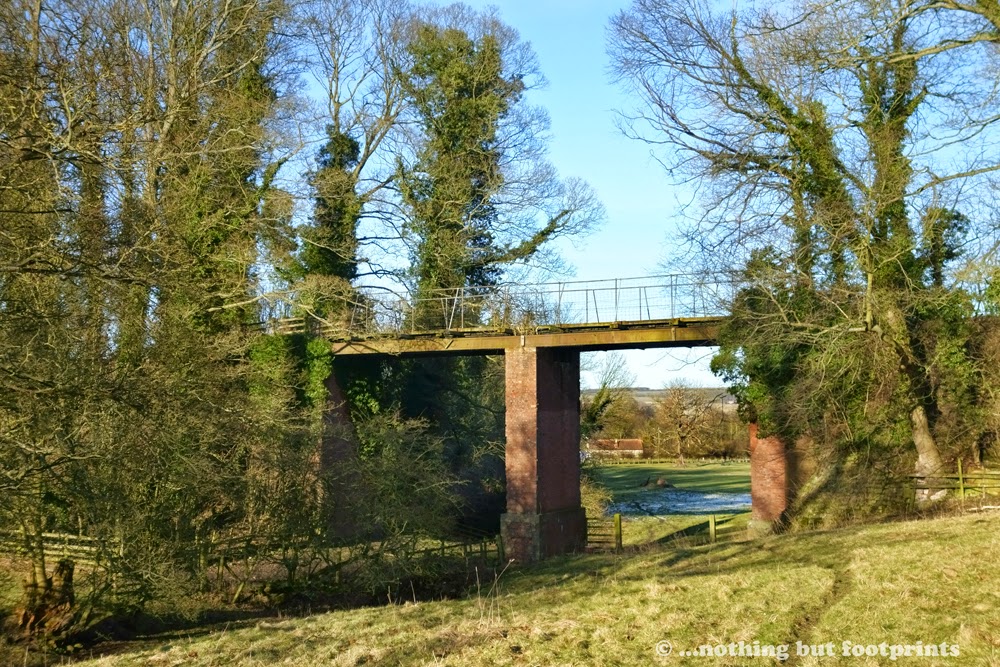 Bridge on the Malton Dodger Line

Our route now took us along the B1248 through the centre of North Grimston, passing the Middleton Arms, a pub which was all too familiar to us.  Back in May we had spent the fourth night of our Yorkshire Wolds Way walk in what can, at best, be described as "quirky" accommodation.  The doors were open and we decided it would be rude to pass by without stopping for a beer or two.  The sun was still shining and a picnic bench by the front door meant that at least I didn't have to remove my boots. 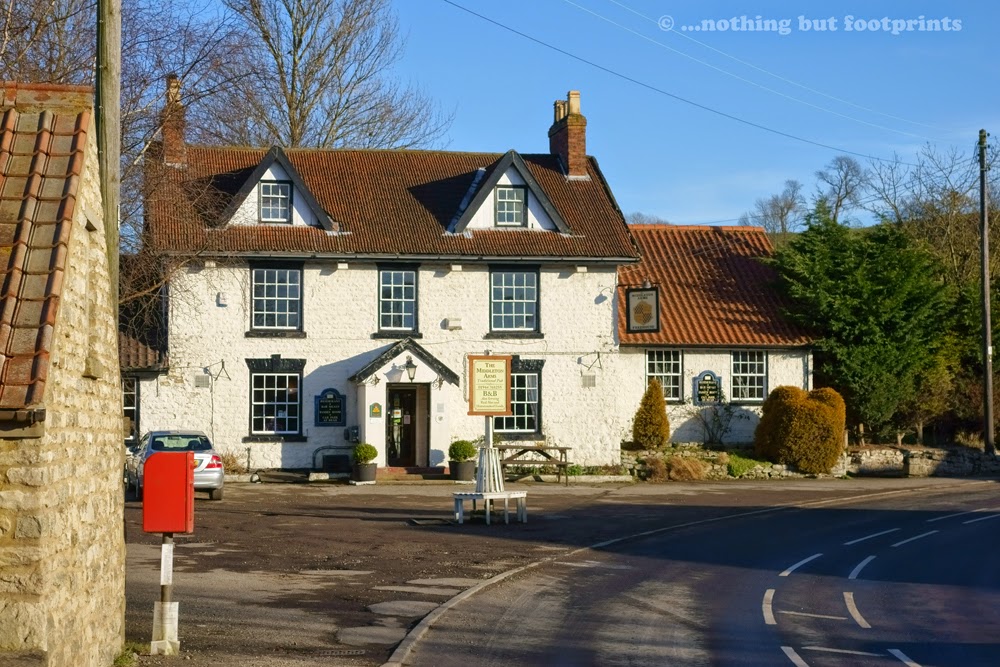 From North Grimston we followed a farm track which took us to a point where the Centenary Way and the Yorkshire Wolds Way merged once again.  In May we had continued to follow the farm track up towards Settrington Beacon, but now we turned right, heading back in the direction of Wharram Percy. 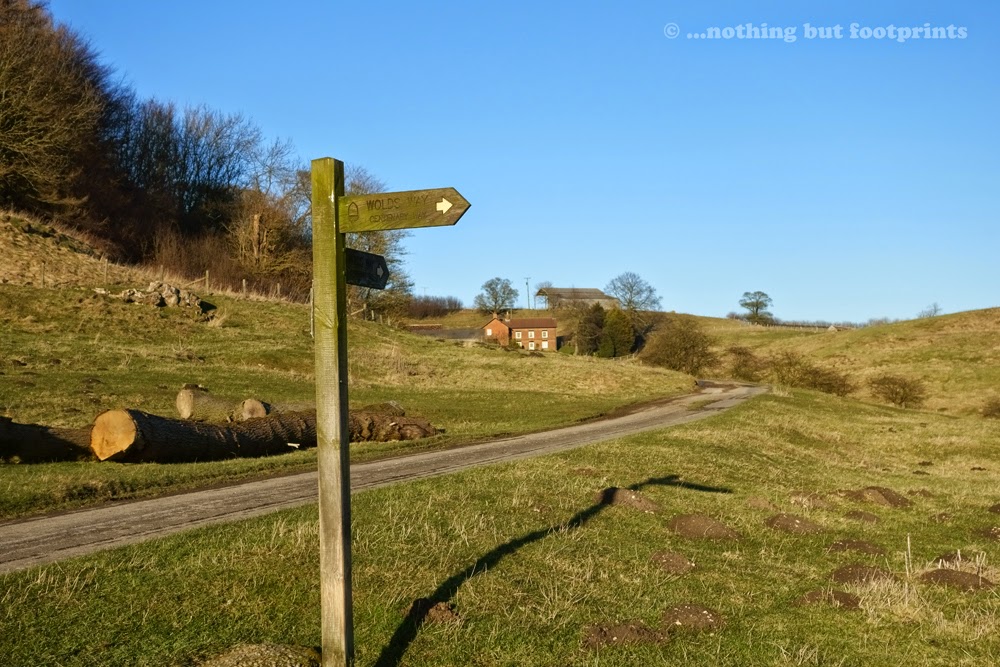 The path led us uphill to a point called High Peak, which is perhaps a slightly exaggerated name but nevertheless the higher elevation did provide us with further views over to Malton and across the Vale of Pickering. 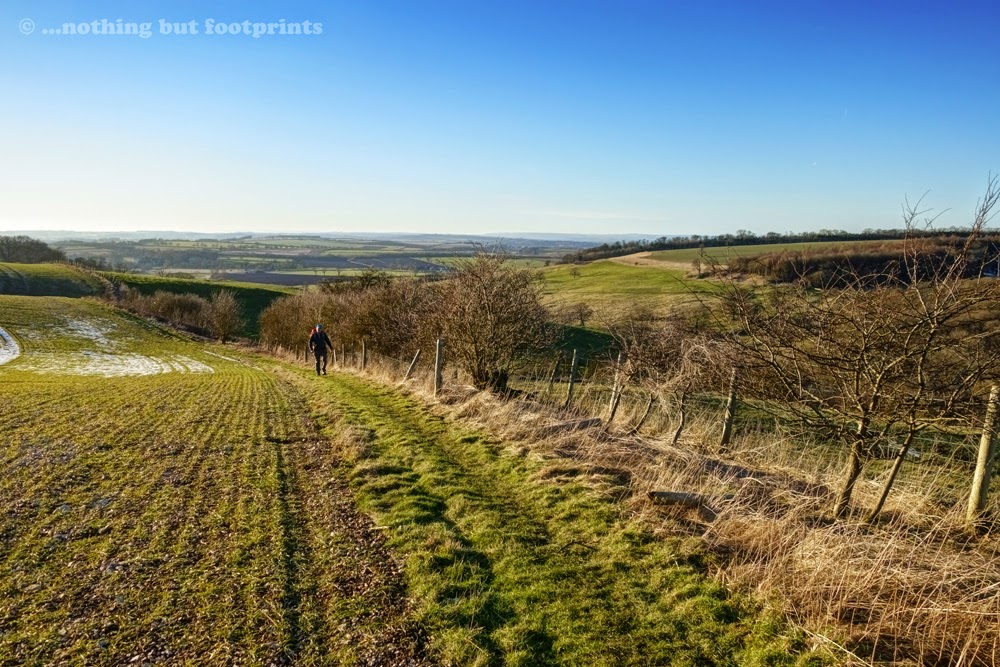 From High Peak we rejoined the B1248 again and followed it down to the village of Wharram-le-Street before turning onto a country lane which led us to the path down to the deserted medieval village of Wharram Percy.  The light suddenly began to fade and I glanced at my watch, discovering with surprise that it was nearly 5 p.m.  A quick check with the GPS confirmed that we had already walked 13 miles, there being at least a further two miles to walk to take us back to Thixendale.  Clearly I had miscalculated the distance when plotting the route and our break at North Grimston meant that we'd be undertaking the final part of our walk in darkness.  Luckily we had both packed head torches.

The light was too dim for me to take any photos of the ruined church at Wharram Percy, but as we climbed out of the valley I was at least able to capture the beautiful Turkish Delight coloured sky over the distant North York Moors. 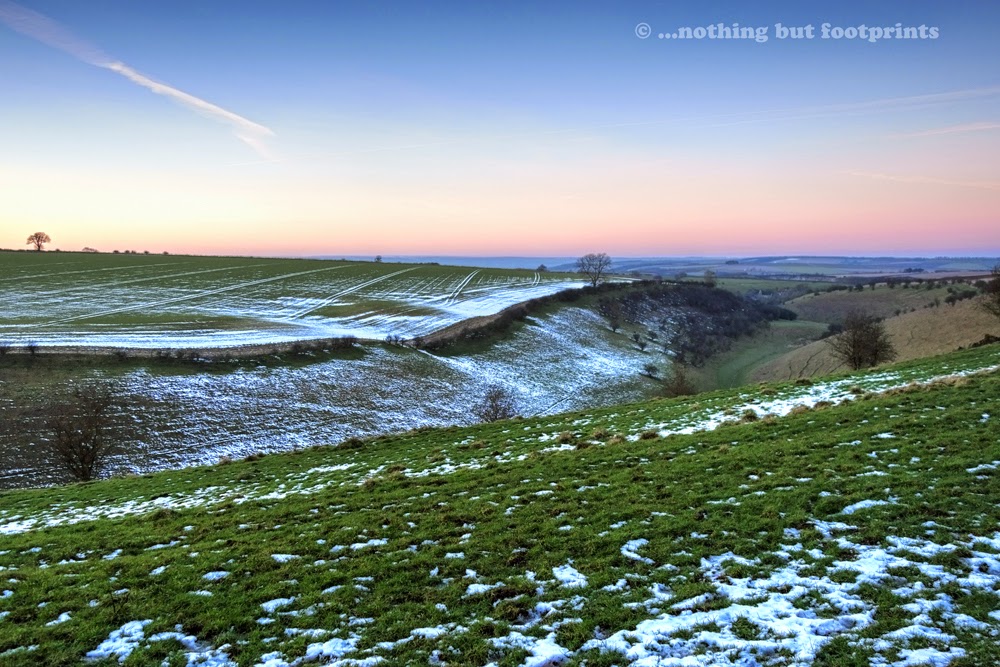 The sun was sinking rapidly over the horizon as we headed along the edge of Deep Dale and I took one final shot before turning to follow North Plantation and then the route of the Centenary Way back down into Thixendale. 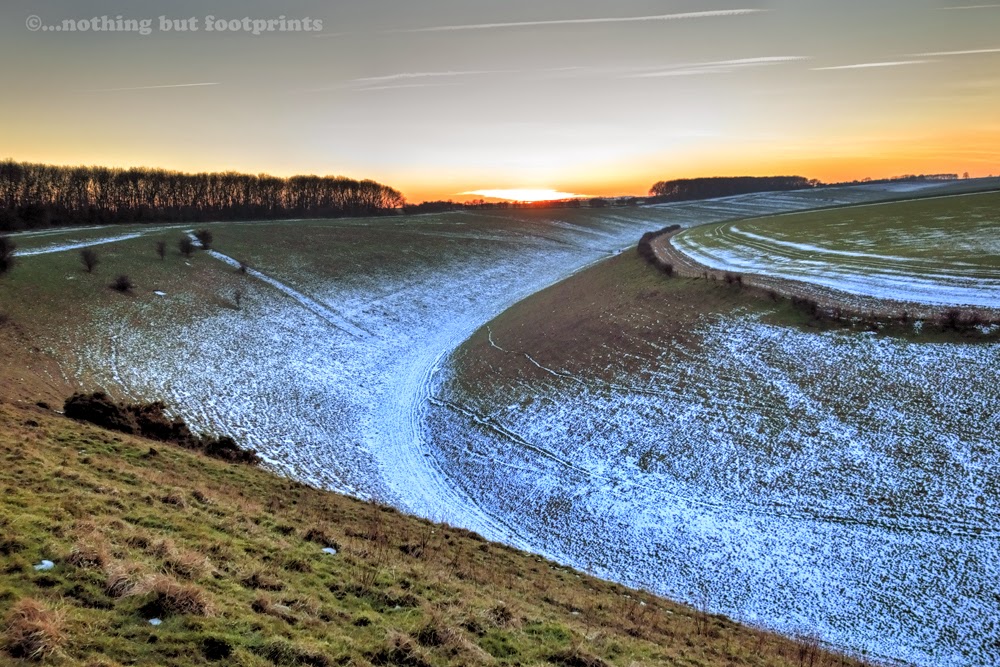 The final mile or so of our walk was undertaken in darkness, guided only by the light from our head torches.  It felt like it must be very late even though it wasn't yet 6 p.m. and the pub in Thixendale was still closed.  The temperature had dropped to freezing and so we immediately set off for home reflecting upon what had been an excellent walk, a little longer than anticipated, covering both familiar and unfamiliar ground. 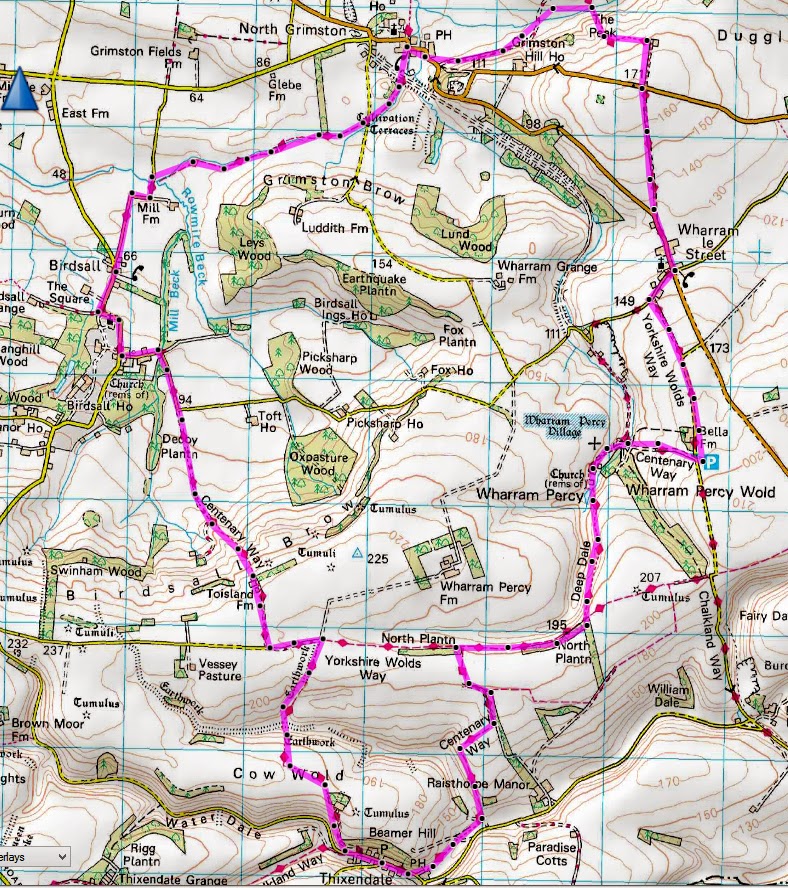 Coming soon....To the North York Moors again, for a walk from the village of Goathland, visiting a Roman road and a well-known waterfall.
at 10:07