Ravenscar is a small rather quirky little village perched on the North Yorkshire coast, midway between the seaside towns of Scarborough and Whitby.

Until 1897 Ravenscar was known as Peak and was home to one of the earliest chemical works in the country, producing alum for use in the textile industry.  In the late 19th century a group of businessmen formed the Ravenscar Development Company with the aim of building a large seaside resort to rival the likes of nearby Scarborough.  Roads were built, sewers were constructed and a railway station was opened, but by 1913 the company had gone into liquidation, leaving Ravenscar (as it had been renamed) to be thereafter known as "the town that never was".

On a chilly morning in early March we drove out to Ravenscar and parked on the cliff top just as a heavy rainstorm blew in from the North Sea.  Thankfully this quickly passed over and the sky began to brighten as we set off to walk inland, pausing to admire the sweeping view across to Robin Hood's Bay. 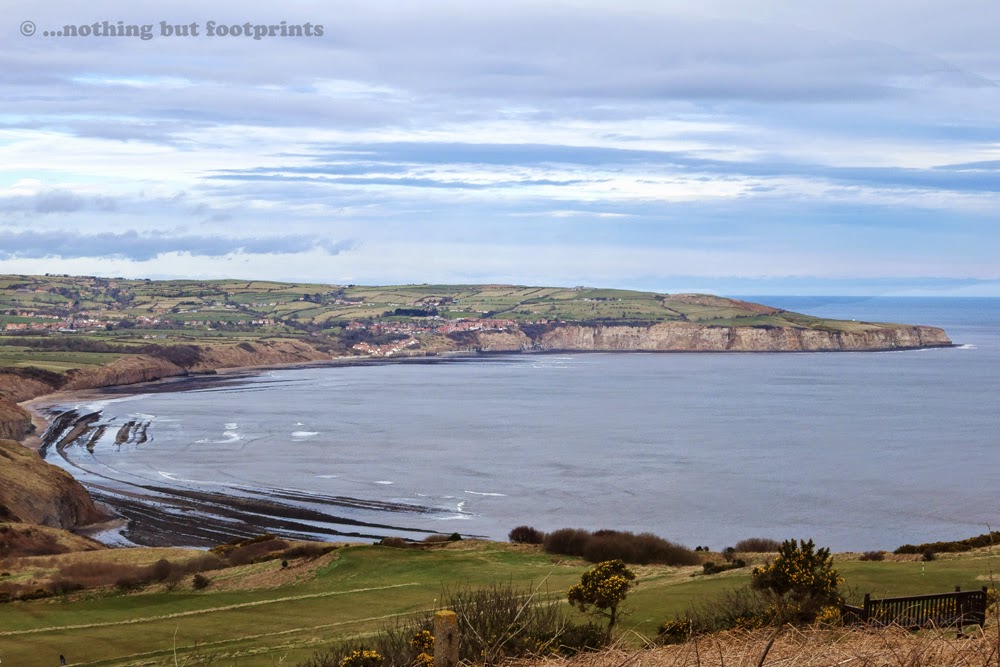 Looking across to Robin Hood's Bay
Our route followed the main road out of Ravenscar towards Scarborough, passing the ruins of Peak Mill, a windmill which was built in 1858.  When the road turned southwards, we continued straight on, following a farm track towards woodlands. 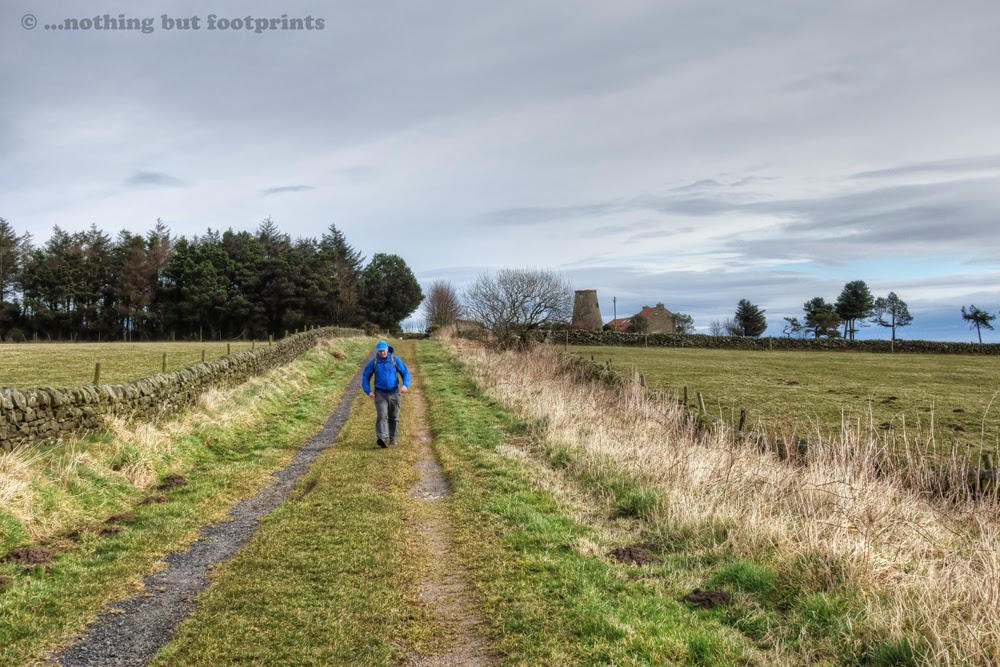 Just before we turned to follow the path into the woods I noticed a standing stone, marked with the letter 'C' and a cross, one of several such boundary stones which mark the edge of the woodland. 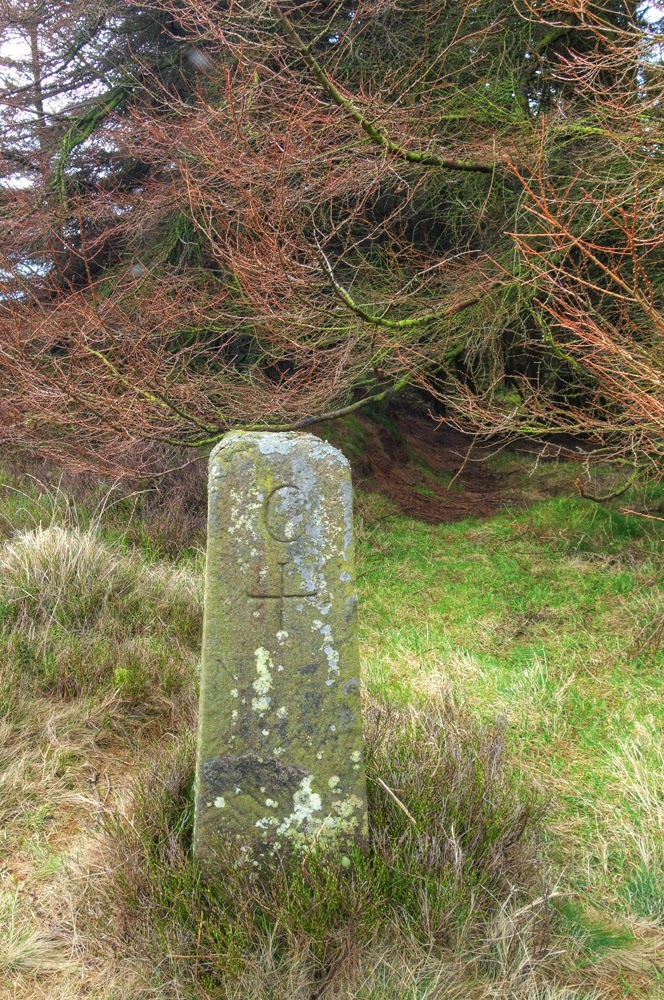 Our path emerged from the woods by the side of the Falcon Inn, a former coaching inn used as a changeover point for horses making the journey between Scarborough and Whitby.  Today the Falcon is a popular "gastro pub" providing accommodation both within the inn itself and outdoors in a selection of glamping pods.  As we approached the rear of the inn we were enticed by delicious aromas wafting towards us on the breeze.  The thought of a tasty snack and pint of beer was too good to resist and so we made our way to the main entrance only to find that we were an hour too early.  It was just a little after 11 a.m. and the pub doesn't actually open until noon.

I must admit, I was more disappointed at the thought of missing out on a beer than a meal.  I'm always a bit put off by the term "gastro pub", which to me seems a tad pretentious and, if anything, brings thoughts of an upset stomach to mind.  Perhaps I'm associating "gastro" with "gastroenteritis"?  It just doesn't appeal to me. 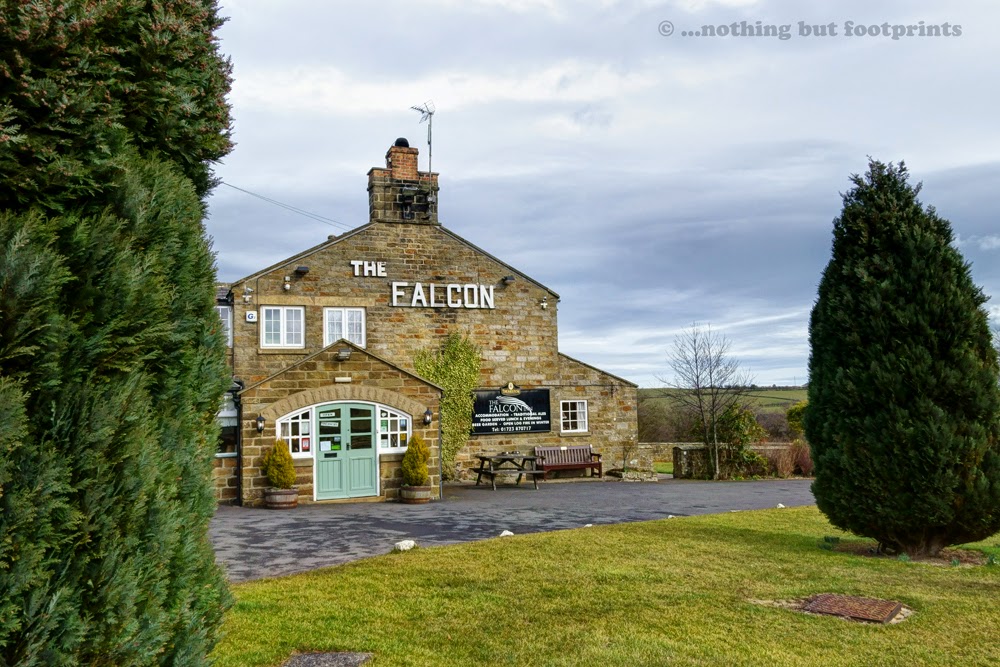 With the idea of finding a pub now harboured in my mind, we crossed the busy A171 Scarborough to Whitby road and headed into Harwood Forest.  Our route followed a forestry road to begin with and after a short distance we were treated to a wonderful view over to Langdale Forest and Fylingdales Moor beyond. 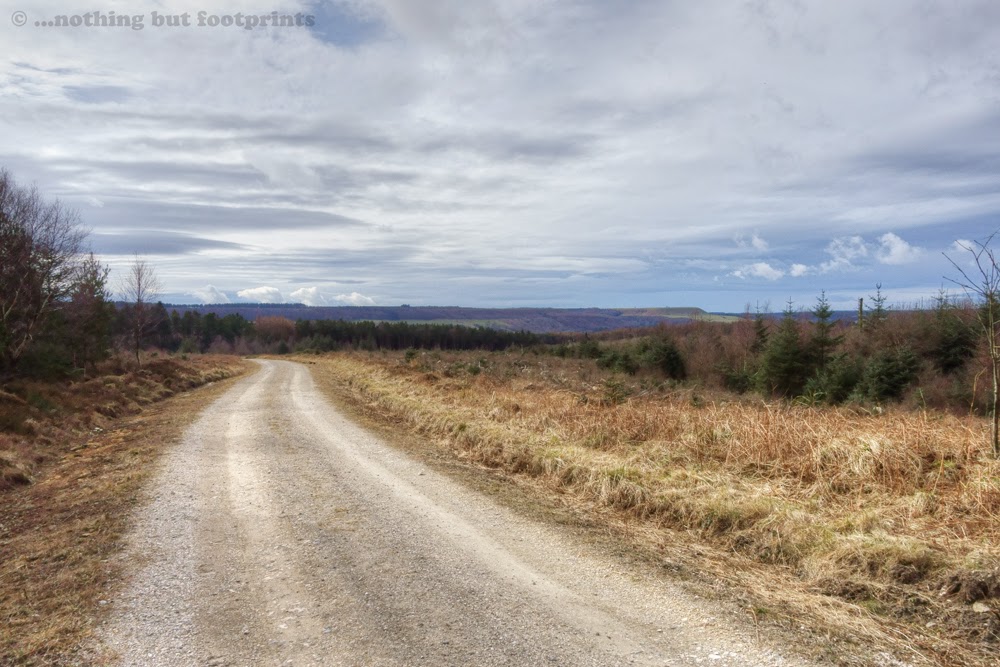 Leaving the forestry road we headed deeper into the forest, following a track eroded with tyre ruts and deep muddy pools.  In the distance we could hear the roar of motorcycle engines and I realised that the damage to this track had mostly likely been caused by off-roaders.  We've been passed by motorcycles and off-road vehicles several times during our walks around the North York Moors and they really do cause a lot of damage, not to mention the horrible noise pollution from the racket their engines make.  I'm not sure if this kind of activity is permitted on Forestry Commission land, but I can't imagine it is, judging by the amount of damage caused. 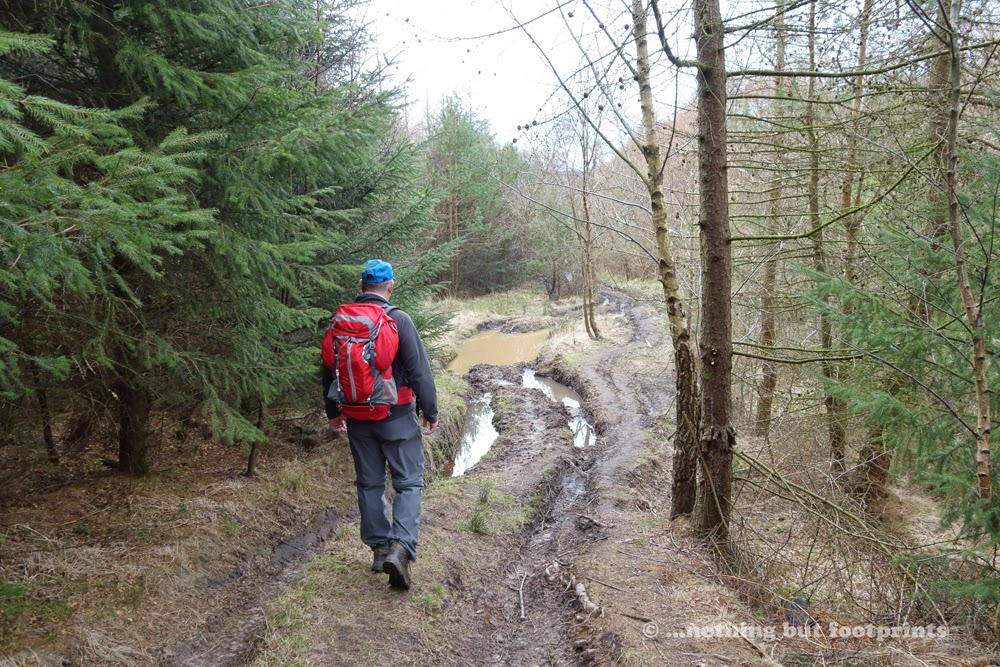 Nothing but tyre ruts

The noise of the motorcycles abated for a while allowing us to hear an altogether different sound which was coming from all the nearby puddles.  We quickly realised it was the chirruping of frogs - hundreds upon hundreds of frogs.  We were surrounded by them and they were all busily engaged in the act of making frogspawn. 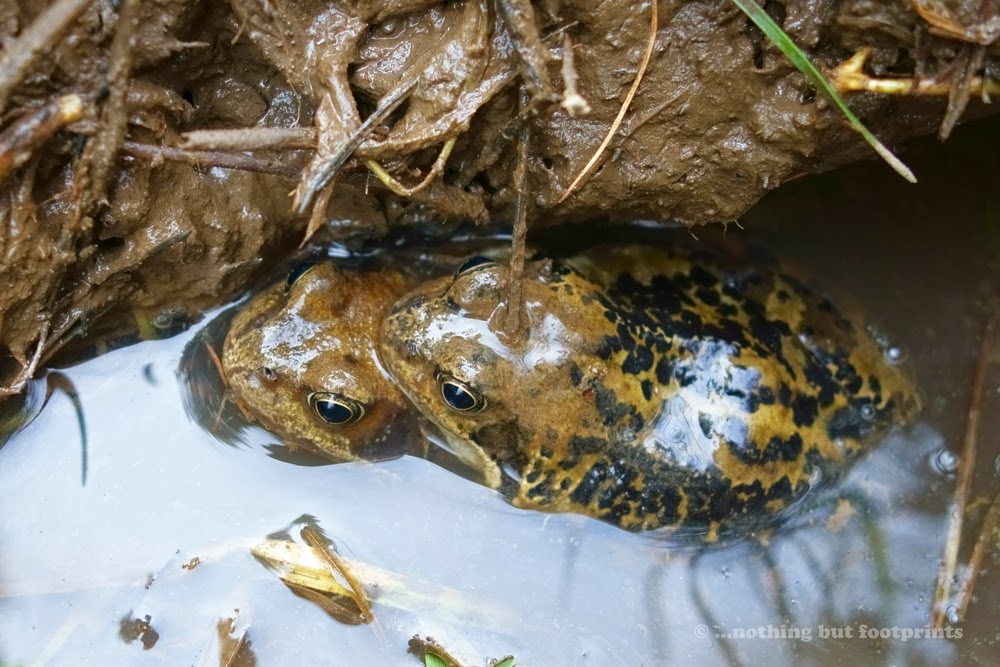 Not only were there frogs in every puddle and tyre rut, they were also on the path too and we had to tread very carefully as we made our way downhill to leave the forest.  I can't help but wonder how they fared when the off-roaders scrambled their way along that path. 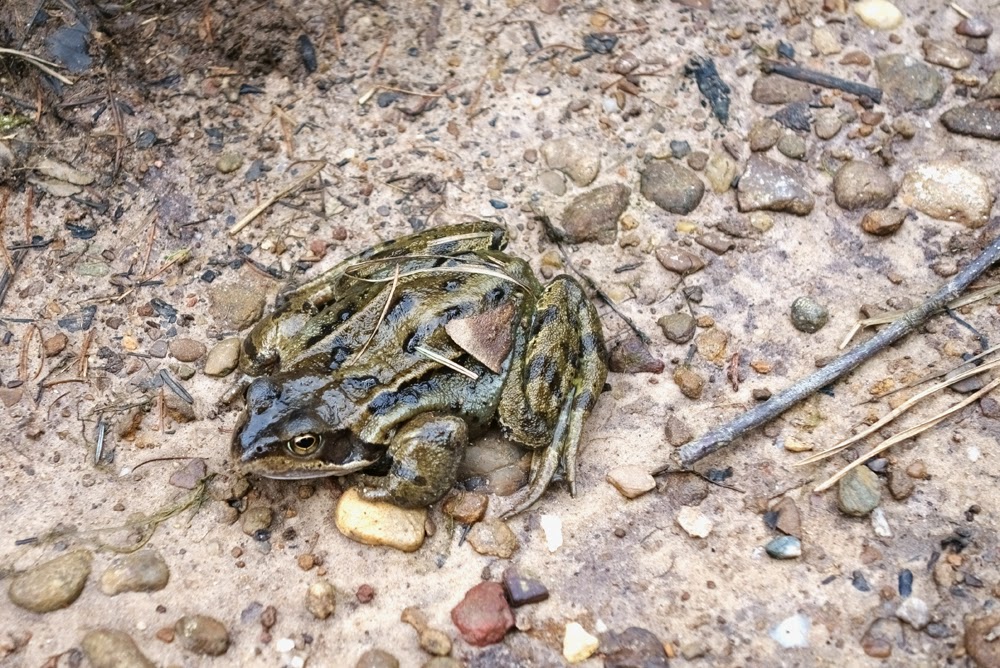 A quick check of the map as we approached the village of Harwood Dale revealed the familiar symbol for a pub, about a mile or so beyond the village.  My original intention had been to turn off the lane to follow a footpath over fields, but now I revised our route and our pace quickened as we continued along the road in the direction of the pub.  As we approached the Mill Inn I soon realised that we were in for another disappointment.  It not only appeared to be closed but it also looked a bit derelict.  I've since learned that this pub is something of a visitor attraction, having been in the ownership of the same family since 1931 and remaining little changed since that time.  I have also discovered that it only opens its doors for six months of the year, between April and October.  For a short while we wondered whether we should sit on a picnic table outside the inn to eat our sandwiches, but instead we continued, following a farm road to rejoin our original route. 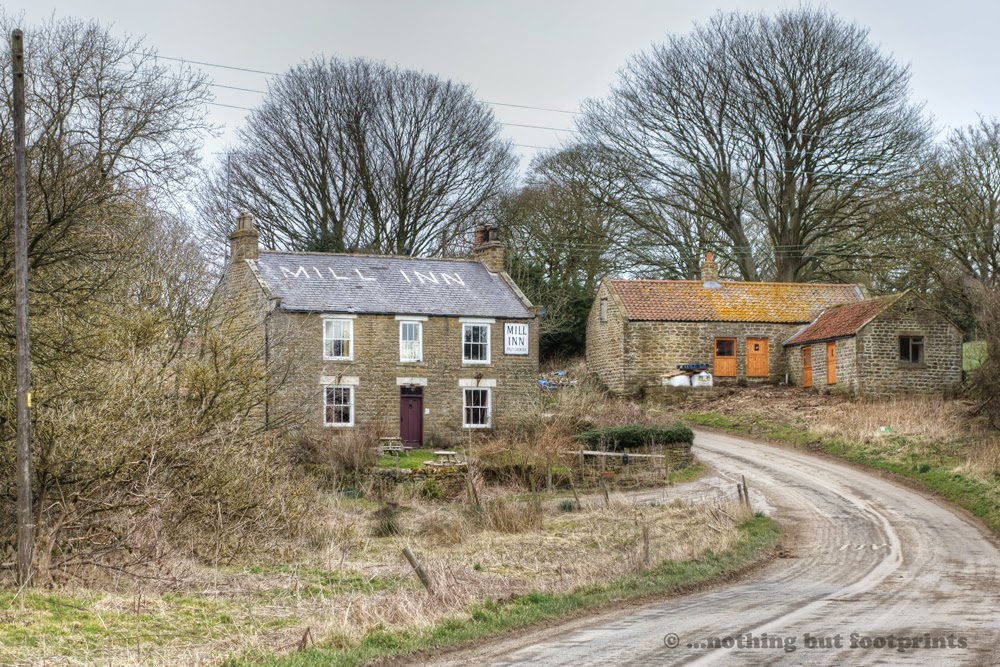 After a mile or so we rejoined the road before turning off to enter Scar and Castlebeck Woods, a secluded ravine carved by streams running off the adjacent moorland.  Managed by the Woodland Trust, the woods are designated as a Site of Special Scientific Interest and are a rare survival of the oak forests which once covered the North York Moors.  In contrast to the mostly coniferous Forestry Commission woodlands which cover areas of the National Park today, this lovely woodland was a treat to walk through, if a little muddy and slippery in places.  We followed the course of the Jugger Howe Beck as it wound its way through the trees.  Later in the year I could imagine these lovely woods would be very busy with visitors, especially when the bluebells are in full bloom, but on this occasion it seemed that we had the entire woodland to ourselves.  It was blissfully peaceful. 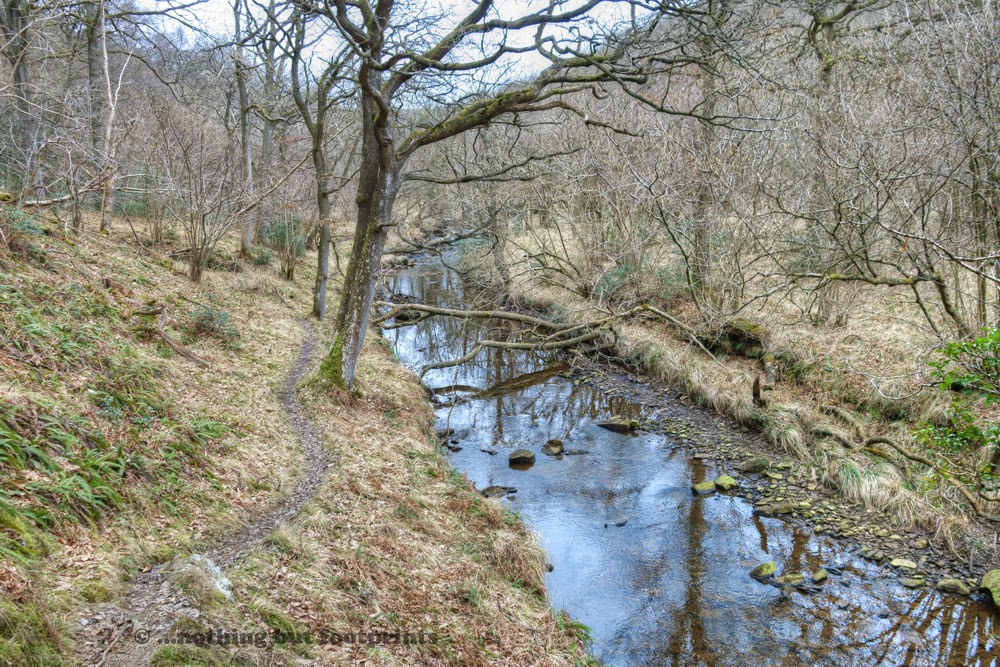 Leaving Scar and Castlebeck Woods behind us, we climbed steeply to pick up a path which skirted around the edge of Jugger Howe Moor.  Here the paths were indistinct and we sat on a bank for a while to have a drink and get our bearings.  Looking back from this vantage point gave us an excellent view of the ancient woodland ravine and beyond to Langdale Forest. 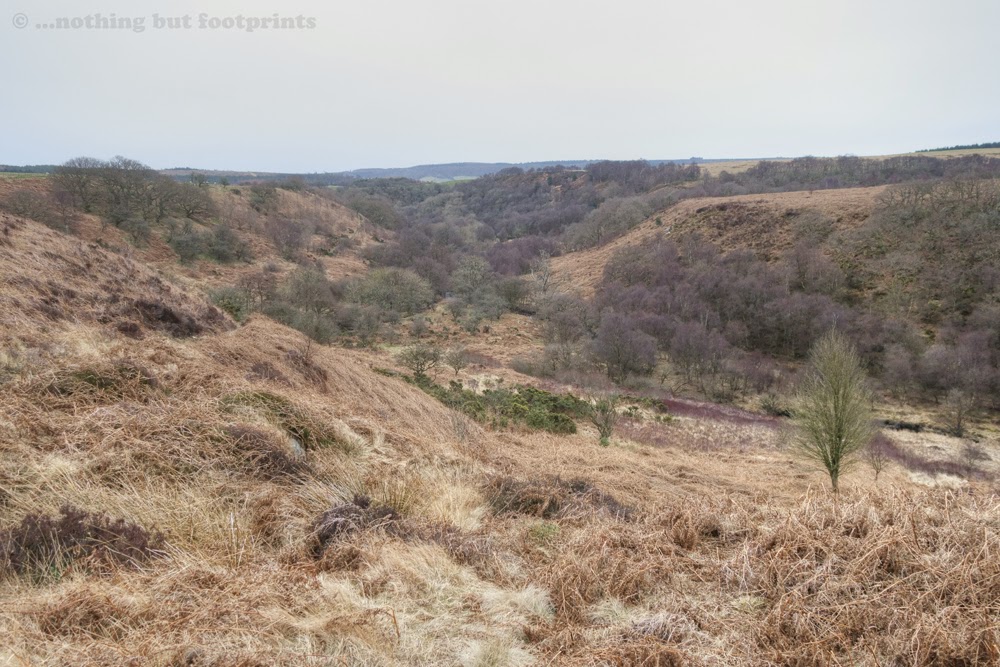 Looking back towards Scar & Castlebeck Woods

After a couple of wrong turns and further squinting at the map a more obvious path presented itself which led us downhill to a series of boardwalks snaking a route through the valley bottom.  These are a fairly recent addition and were installed by the Hawk and Owl Trust to form a nature trail through the area. 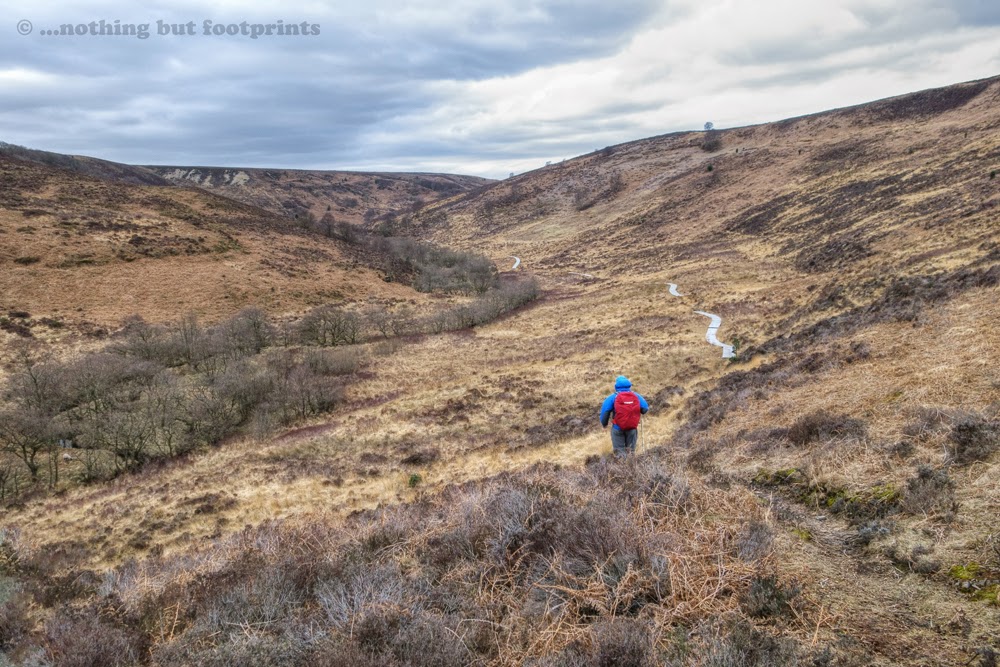 The route continued to follow the course of Jugger Howe Beck and the boardwalks certainly made for a pleasant walk through an otherwise boggy terrain.  They also made navigation a piece of cake! 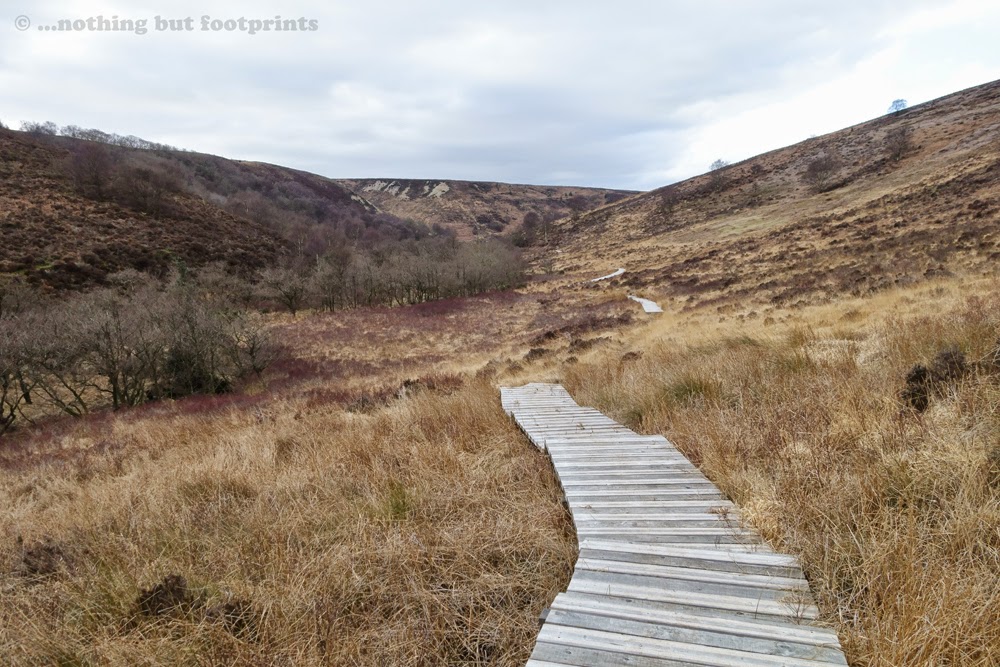 At the end of the valley we turned to walk towards the coast again, following the northern edge of Jugger Howe Moor along a path over grassy pastureland.  In the distance we could see a steady stream of traffic travelling along the A171 between Scarborough and Whitby.  Suddenly it dawned on us that we hadn't passed another person on the entirety of this walk.  With the exception of the noise made by the off-roaders it had been incredibly peaceful and at times it had seemed like we'd been lost in our own personal wilderness. 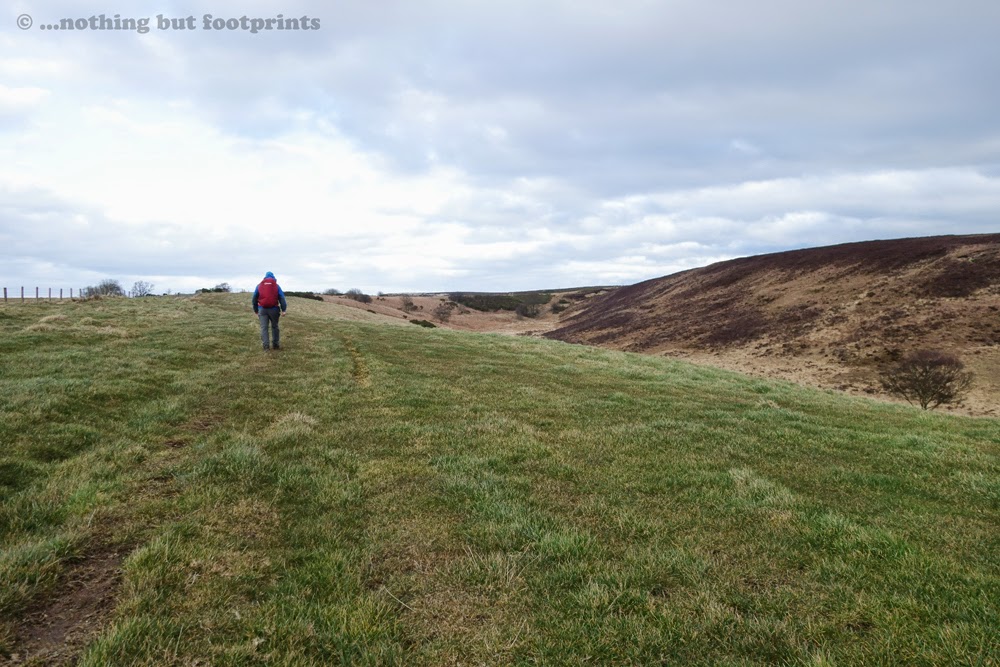 Heading eastwards along the edge of Jugger Howe

Once we had reached the busy main road we walked for a short distance along a lane which ran parallel to the A171 at a lower level, ending with a car park for the Jugger Howe Nature Trail.  At this point we were able to cross the road and begin the final section of our walk, crossing Stony Marl Moor in the direction of Ravenscar.  Suddenly the sun decided to put in an appearance as the clouds began to clear to reveal a lovely blue sky.  We were now following the final section of the Lyke Wake Walk, a 42 mile long path which crosses the entirety of the North York Moors from Osmotherley in the west to Ravenscar in the east. 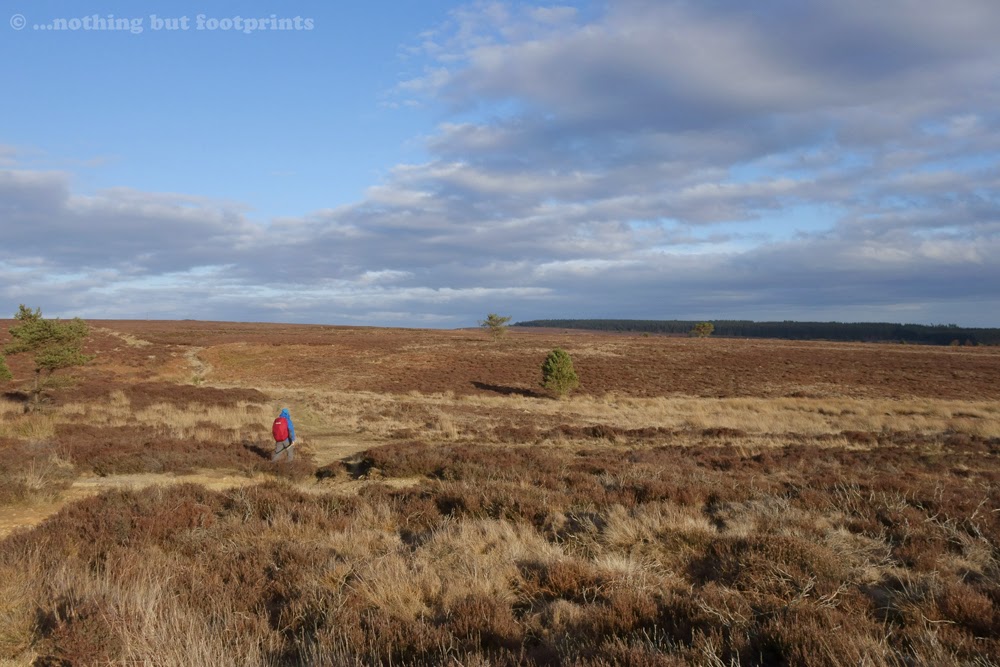 At the end of the moorland path we turned to walk along a lane above Ravenscar, looking down over the Raven Hall Hotel and golf course. 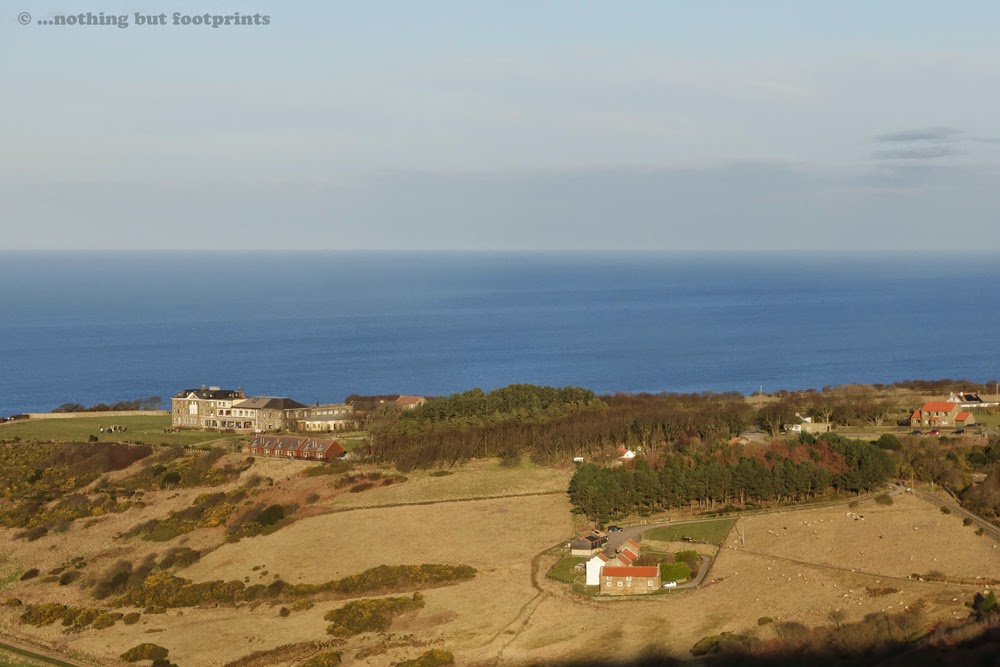 This 12 mile walk had been a wonderful contrast with some of the busier trails in the Yorkshire Dales and Lake District.  Of course, it was still early in the year and in the warmer months I expect the area would be much more crowded.  But for this one day it had been just ours and I'd enjoyed it very much indeed. 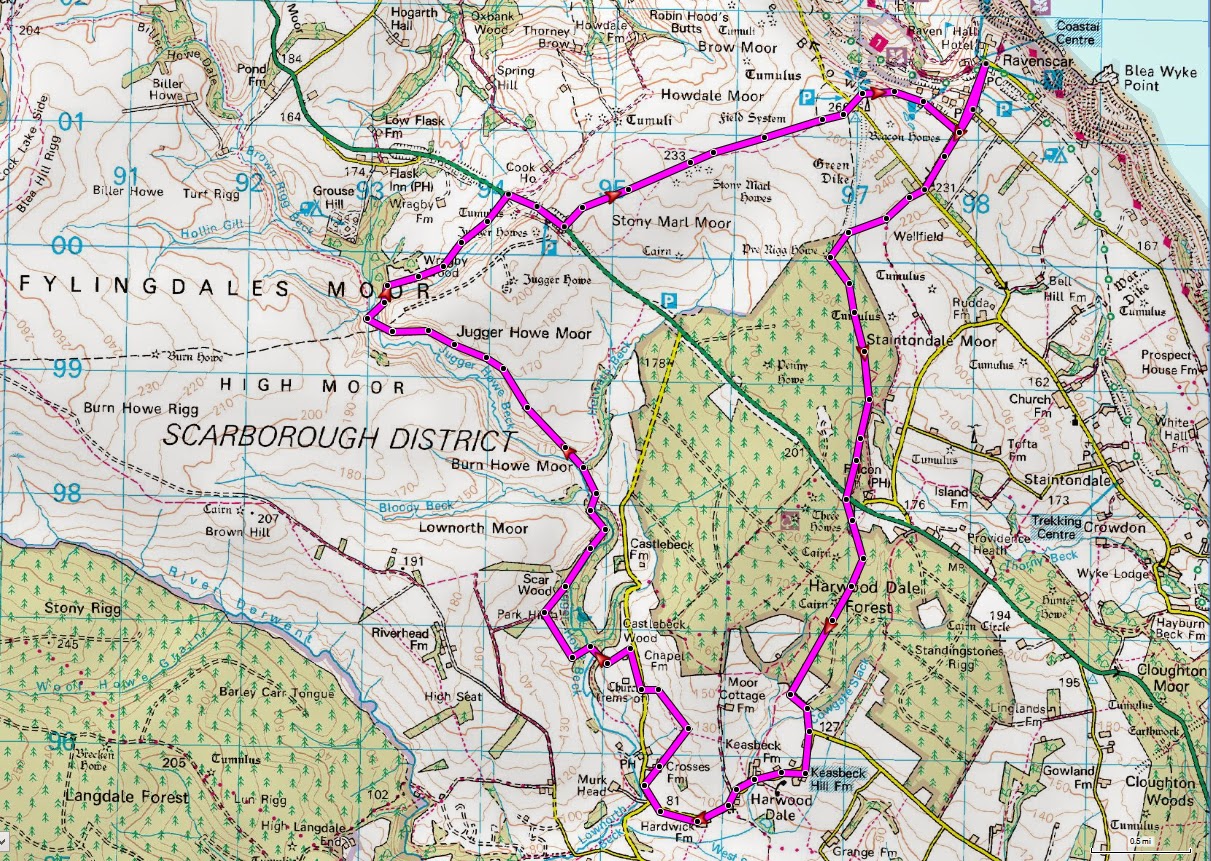 Coming soon...We travel up the coast a little for a circular walk from Robin Hood's Bay to Whitby and back via a dismantled railway line.