- January 05, 2016
In April (2015) we drove out to the Yorkshire Dales with the intention of undertaking our first "serious" hill walking trip of the year.  Over the winter months our walks tend to be limited to the North York Moors and Yorkshire Wolds, so come the spring I'm usually itching to strike out a bit further afield.  This year, what with one thing or another, we'd left it a bit later than usual and I was longing to get out there and onto higher ground.

Our base for the weekend was Hawes and my plan was to complete a circular walk to Hardraw, up Great Shunner Fell, across to Lovely Seat and then back into Hawes via Sedbusk.  But first, on our drive out to Hawes, we stopped at the little village of Bainbridge from where we completed a thoroughly enjoyable circular walk of just over nine miles.

From our parking place by the village green we walked along a quiet road for a short distance as it climbed out of the village in the direction of  Countersett.  The morning was bright and crisp and a blustery wind was doing a good job of keeping the clouds at bay. 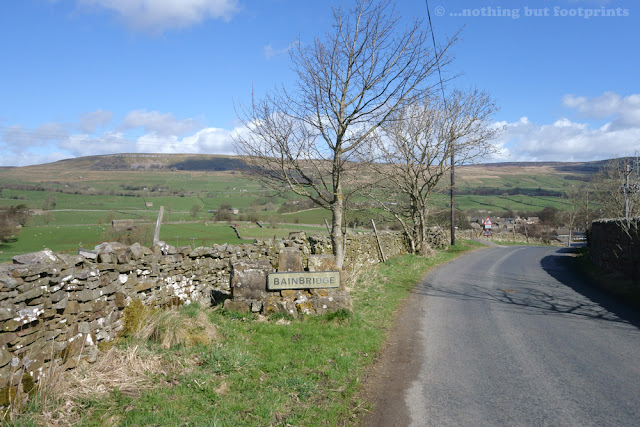 The road out of Bainbridge

At the top of the hill I spotted a public footpath sign, directing us into a field, and not being entirely sure of our route at this point I suggested that we should follow it.  As it turned out, this route took us away from where we actually wanted to be, but the views over Bainbridge and to the distant fells beyond Askrigg more than made up for the unplanned extra distance. 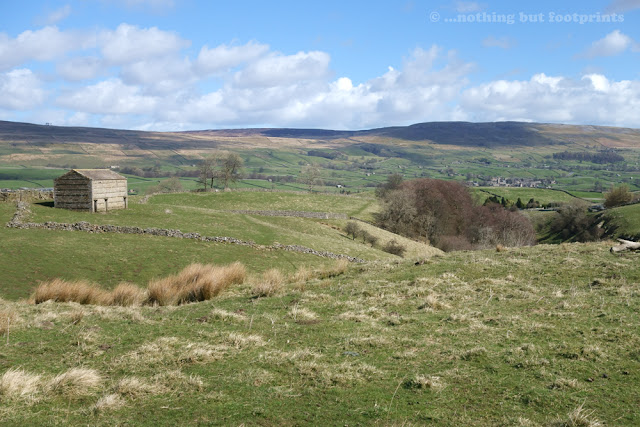 At the end of our short diversion we met up with the road again and doubled back in the direction of the Cam High Road.  This former Roman road originally ran from the Roman fort of Virosidum (Bainbridge) across the fells to Ingleton.  The section we were about to walk along stretched out in an almost straight line as far as the distant horizon, in true Roman road fashion. 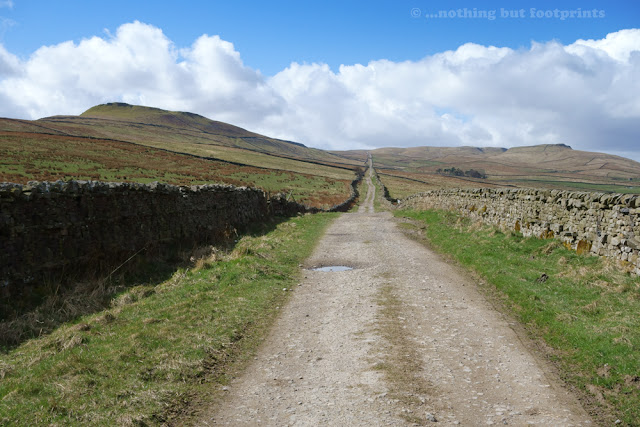 We continued along the Cam High Road for a couple of miles or so, all the while being buffeted by the wind which increased in strength the higher we climbed.  The going underfoot was very easy though and it was a genuine pleasure to be tramping along in the footsteps of the Roman legions.  It was so pleasant I could happily have continued following the Cam High Road for as long as possible, but eventually I spotted a sign directing us to a path off to our left which led us through a gap by a limestone escarpment.  From here we were to head downhill to the hamlet of Marsett. 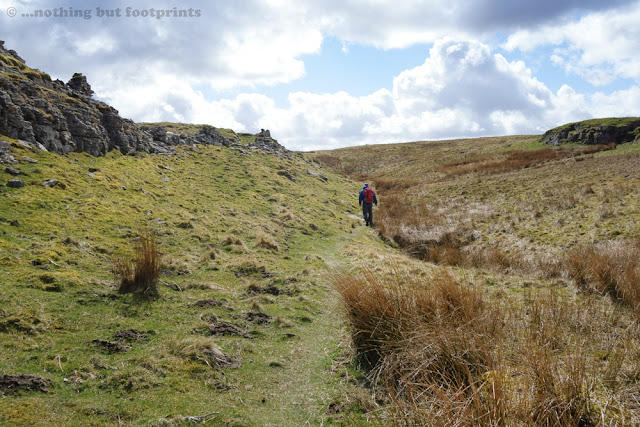 As we emerged through the gap the valley of Raydale opened up before us, providing us with our first glimpse of Semerwater, where small waves of white water were rippling the surface and catching the occasional beam of sunlight.  It was quite cold at the top of the hill, but even so we stood there for a while, just taking in the magnificent view. 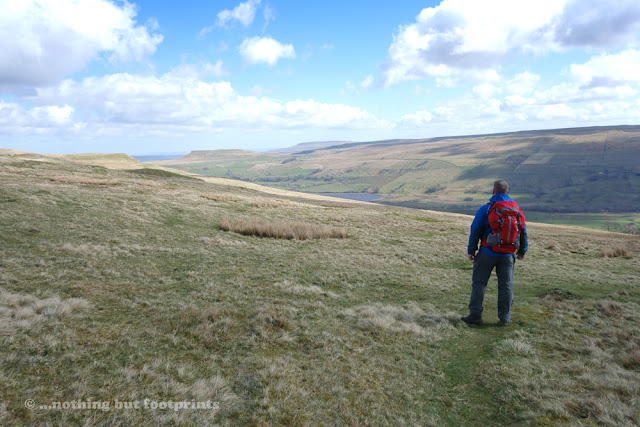 Now our route led us steeply downhill along an obvious grassy path which headed directly into Raydale and towards Marsett. 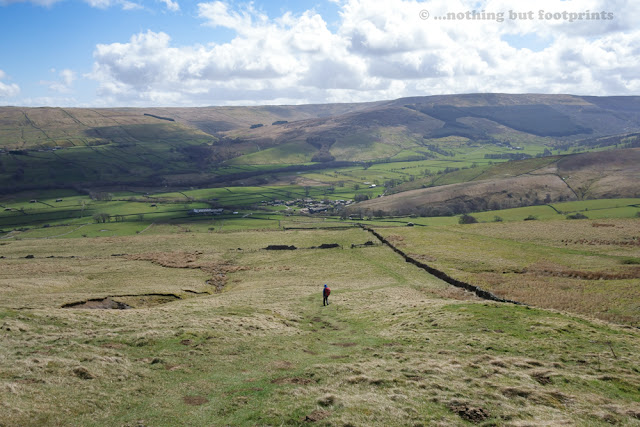 Heading down to Raydale

As I descended towards Marsett I periodically stopped to take in the view and to get my bearings.  Looking at my OS map I realised that if I was to continue in a straight line from this point, across the valley floor, up through the woodlands and over the hill, I would find myself on the Dales Way in Deepdale.  At this point though our Dales Way walk was a full two months away and I would just have to be patient. 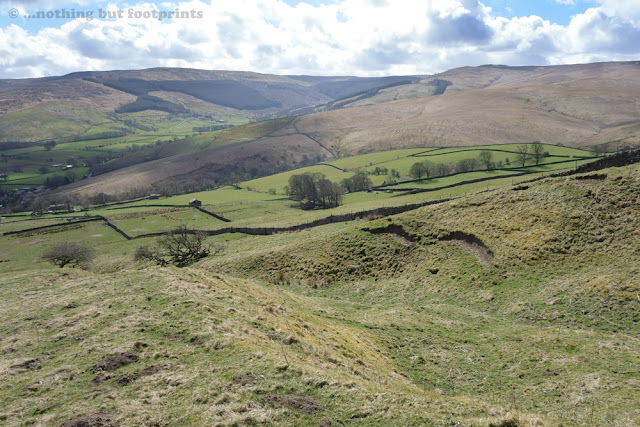 Once we had reached the valley bottom of Raydale we passed through the little settlement of Marsett and turned to follow a stony lane which ran alongside Bardale Beck.  The sun continued to shine and we were pleasantly sheltered from the blustery wind we'd experienced  on the higher ground. 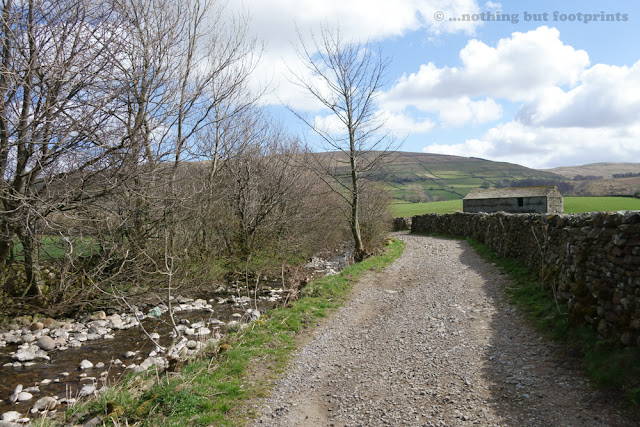 After a short walk the lane led us away from Bardale Beck and along to a bridge over Raydale Beck which a little further along joined up with Bardale Beck where the two become jointly known as Crooks Beck which in turn feeds into Semerwater. 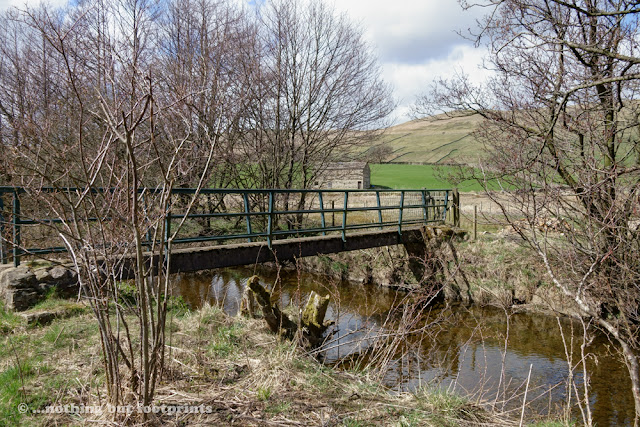 For a while our path became indistinct as it crossed a section of marshy ground.  At this point I found myself regularly checking my GPS which confirmed we were on the right course, although as we squelched along it certainly didn't feel as if we were. 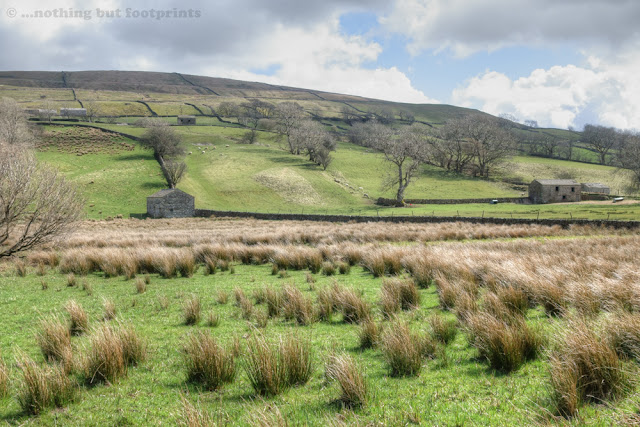 Eventually the marshy ground gave way to firmer terrain as we climbed out of the valley in the direction of the curiously named Stalling Busk (meaning "clearing in the forest for stallions") which, along with Marsett and Countersett is one of the three settlements to be found in Raydale. 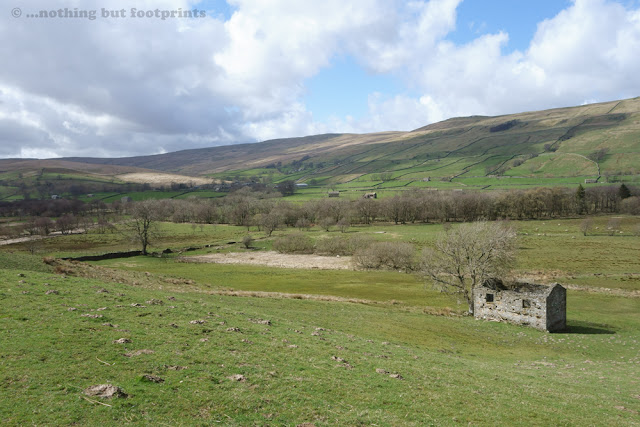 Looking back down Raydale

Bypassing the main settlement of Stalling Busk, we headed towards Semerwater, stopping for a break by the old ruined village church.  Originally built as a chapel in 1603, this tiny building became the main parish church in 1860 and was used until 1909 when the new, larger church of St. Matthew was built.  Today the church is a ruin, although preservation work is occasionally carried out, the most recent being in 2000. 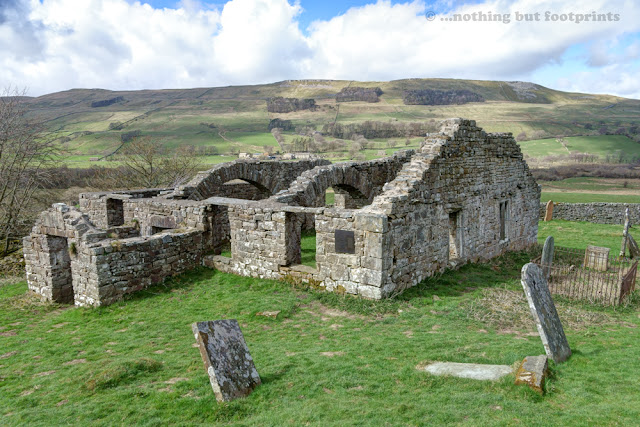 The graveyard attached to the ruined church is very well kept and, sitting as it does above the shores of Semerwater, it's very picturesque. 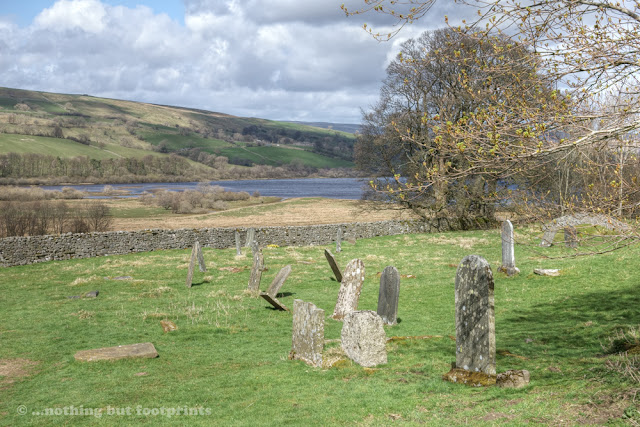 Churchyard with a view

Leaving the ruined church behind us we continued along the path towards Semerwater, the second largest natural lake in North Yorkshire (the largest being Malham Tarn).   It's a place rich in folklore, the legend being told that where Semerwater now lies a proud city once stood. One evening the city was visited by an old man, poor and hungry, and begging food from door to door.  At every house he was turned away.  Close by lived a lonely shepherd and his wife, and it was in their cottage that the wanderer at last found food and rest.  In the morning he rose and, facing the town with arms uplifted, the beggar pronounced this curse: "Semerwater rise!  Semerwater sink!  And swallow the town, all save this house, Where they gave me meat and drink."  Immediately, the waters rose, drowning everyone in the town except the shepherd and his wife. 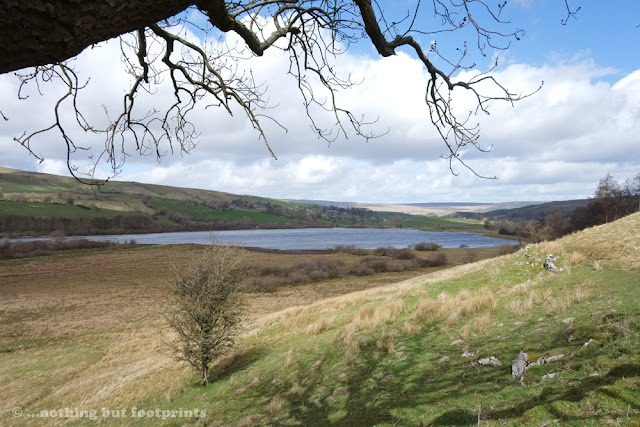 The legend also has it that on a fine day it's possible to see the remains of the city beneath the water.   As we walked along the lakeside path though, imagining a city in this beautiful place was just too big a stretch of the imagination.    In actual fact the lake is glacial and was formed at the end of the last Ice Age when the outflow was blocked by a vast quantity of glacial till. 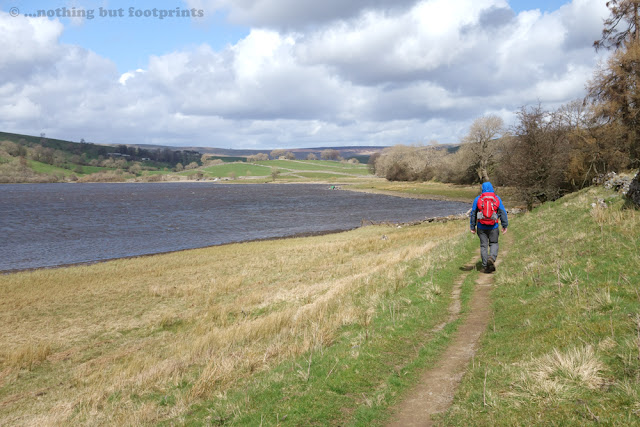 Today Semerwater is a nature reserve maintained by the Yorkshire Wildlife Trust and is home to many species of water birds.   It is also popular for fishing, canoeing, sailing and windsurfing. 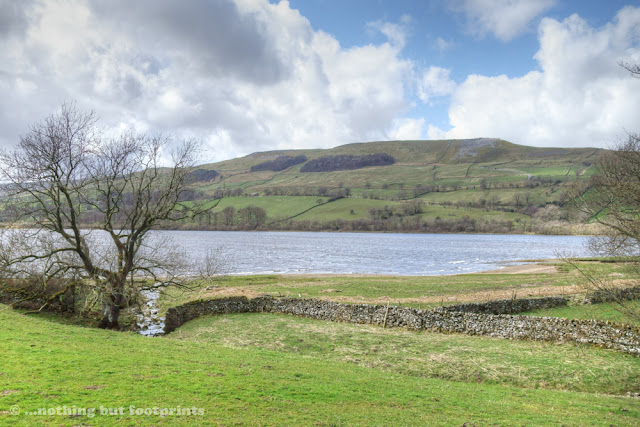 Leaving Semerwater behind us we climbed out of Raydale and found our way onto a footpath by the side of the River Bain.  Officially designated as a "main river" (that is, a watercourse named as a river on a "main river map"), at just two and a half miles long the Bain is reputed to be the shortest river in England. 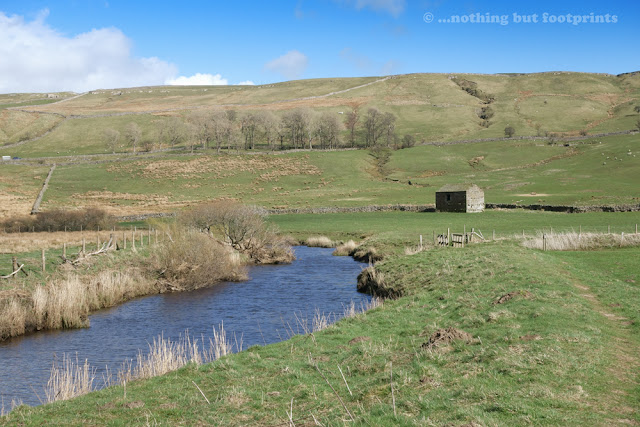 We followed just a short section of the shortest river before climbing steeply uphill and once again to look down on Wensleydale. 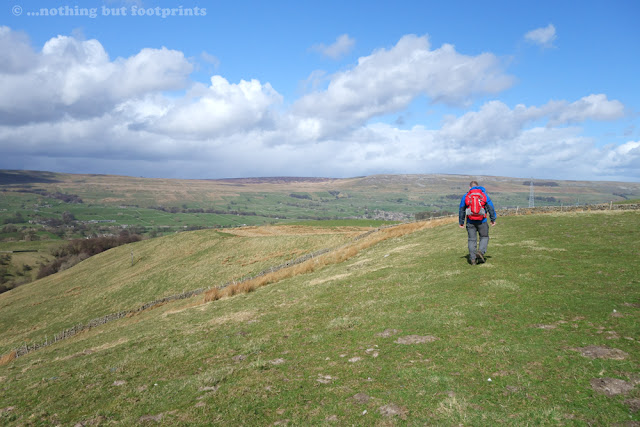 The wind had eased a little as the day had progressed and the sun continued to shine as we approached Bainbridge.  From this high vantage point the village looked especially picturesque, nestling below the fells with the River Bain tumbling over its rocky bed. 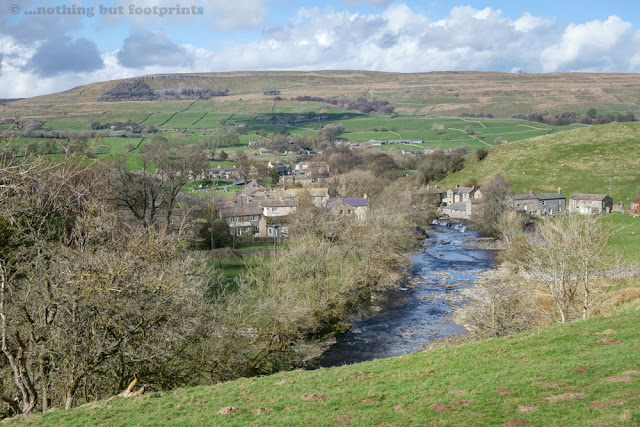 Back in the village we paused for a while on the bridge to watch the Archimedes screw in action.  Installed in 2011, the River Bain hydro plant provides heat, light and power to over 40 homes in the village of Bainbridge.  There was something rather beautiful and mesmerising about it, I thought, as we stood for a good long while on the bridge, just watching it churn the water. 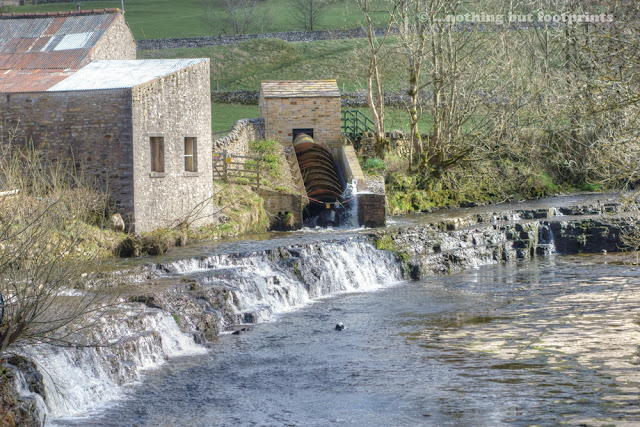 On the way back to the car we called in at the Corn Mill Tea Rooms where we enjoyed a welcome mug of coffee accompanied by some delicious homemade cake - an enjoyable change to our usual finishing reward of a pint of beer.  The beer, of course, would come later, once we had arrived at our base for the weekend in the nearby village of Hawes. 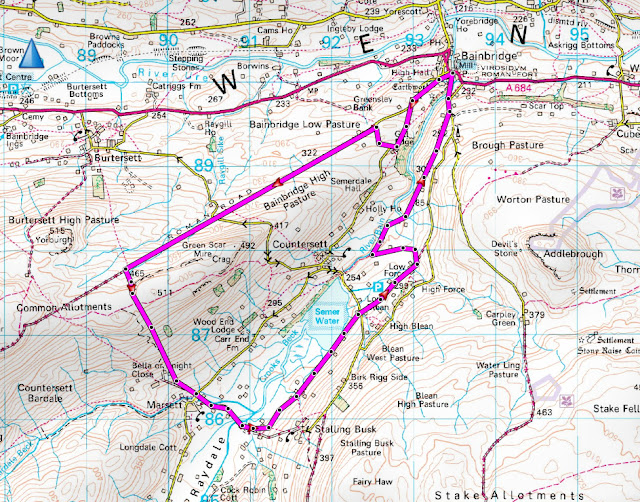 Coming soon...Unfortunately, the second day of our Dales weekend didn't result in a walk, due to high winds and a torrential downpour.  Therefore my next blog will see us returning to the North York Moors where we tracked down a landmark rock formation.
Yorkshire Dales